Dems seek to question Durham about his investigation of Russia probe 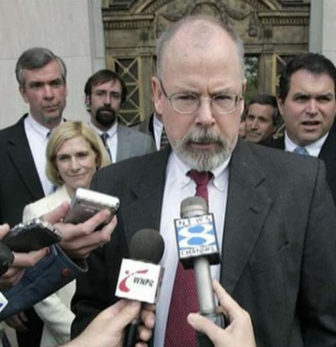 Washington – House Democrats are seeking to interview a long list of Justice Department officials, including Connecticut’s U.S. Attorney John Durham, as they explore allegations of political interference in the work of that agency by President Donald Trump.

The U.S. Attorney’s office in Connecticut declined to comment on Barr’s letter. So did the  Justice Department in Washington D.C.

The request that Durham and other officials come in for interviews opens a new line of investigation by House Democrats into the conduct of the Trump administration and matters relating to Russia and Ukraine.

In his letter to Barr, Nadler demanded a “full briefing,” and gave the U.S. attorney general a March 13 deadline for the documents and witnesses as his panel prepares to hear Barr’s own scheduled March 31 testimony.

“These circumstances are deeply troubling,” wrote Nadler. “Although you serve at the President’s pleasure, you are also charged with the impartial administration of our laws.”

One of the matters Nadler wants to review is the Justice Department’s unusual decision to overrule federal career prosecutors and seek a lighter prison sentence for former Trump political consultant Roger Stone.

Four prosecutors withdrew from the case in protest, and are among the witnesses Nadler is trying to call.

Nadler is also seeking access to a long list of  Justice Department officials involved in issues handled by associates of the president, including former Trump campaign national security adviser Michael Flynn, or who were chosen by Barr to review cases Trump has openly criticized.

The top prosecutor in Connecticut, Durham was assigned to review the Russia investigation after Barr said last spring that “some of the facts” about the inquiry “don’t hang together with the official explanations of what happened.”

Democrats say Durham’s investigation is a politically motivated scheme to undermine Mueller’s work and attack those Trump perceives as enemies.

Meanwhile Trump supporters hope Durham’s probe results in evidence there were political motivations behind the investigation of whether the Trump administration and the Trump campaign was involved in, or encouraged, Russian interference in the 2016 election.

Since he was appointed last spring, Durham has expanded his investigation. He has also opened a criminal investigation into the Russia probe.

That gives him the power to impanel a grand jury and hand down indictments.

But only one person, former FBI lawyer Kevin Clinesmith, is publicly known to be under investigation. Clinesmith altered a document in a Foreign Intelligence Surveillance Act (FISA) request related to former Trump campaign adviser Carter Page.

There are also reports Durham has been examining the role former CIA Director John Brennan played in how the intelligence community assessed Russia’s election interference.

Durham has said little publicly about his investigation.

In a speech at the Conservative Political Action Conference, Rep. Doug Collins, the top Republican on the House Judiciary Committee, said not to expect a report from Durham anytime soon and noted how “quiet” the prosecutor has been.

Collins and other Republicans on the House Judiciary Committee hope to hear more about Durham’s investigation when Barr testifies next month.

One thing Republicans say they want to learn is whether Durham has enough resources to complete his probe.

“I want to hear more about the Durham investigation,” Collins said on Fox News’s Sunday Morning Futures. “Is there still adequate resources, everything needed there?”