Poor people and minorities are less likely to respond

Many U.S. residents suspect that their answers to the census count that kicks off next month will be used against them, according to recent survey by the Urban Institute.

The results show the need for more reassurance that answers are private and help communities get funding, said Michael Karpman, a research associate at the Washington, D.C.-based institute.

“We’re conducting this census in a very challenging climate where there’s a great deal of mistrust in how answers are going to be used,” Karpman said.

The survey of 7,694 people conducted in December found that around one-third of adults are concerned that their answers to census questions will be shared with other agencies or used against them in some way.

Nevertheless, 77% said they would “probably” or “definitely” fill out a form. That number shrank to 67% among 18- to 34-year-olds, highlighting the vexing problem of reaching millennials and Generation Z.

It also was lower among Hispanic people (71%) and people in families including immigrants (69%). 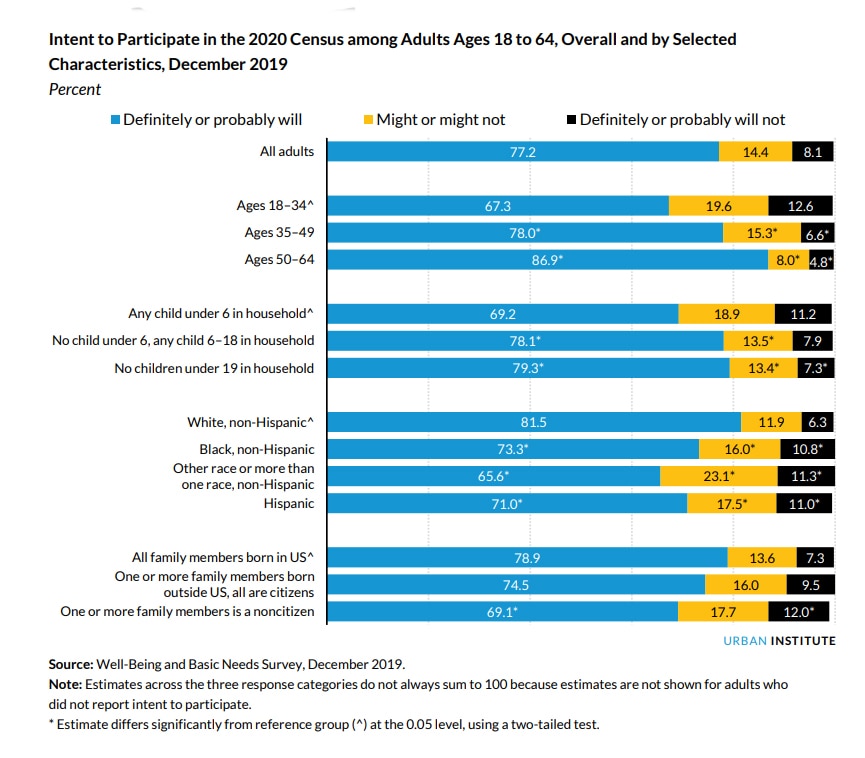 More than two-thirds of respondents erroneously thought there will be a question about citizenship, despite a June Supreme Court ruling striking down that question. Almost half of people in families including immigrants think their answers will be used to find people living in the country illegally, despite federal laws preventing such use.

People in the poorest communities also were less likely to say they would respond — about 71%, compared with about 82% in the communities with the least poverty. That could cause trouble for the states most dependent on census counts for funding, which a recent study found are those with a lot of poverty and rural areas.

The level of suspicion and misinformation, less than a month before the first mailings go out to most people in mid-March, means there’s still a lot of work to convince people that it’s safe and helpful to communities to get an accurate count, Karpman said.

“This underscores the importance of outreach efforts that are already under way, focusing the benefits of participation and countering the misinformation that people are getting,” Karpman said.

As the political stakes become clearer, more states — even some red ones that had held back — are trying to motivate residents to participate in the census this spring.

This story was originally published Feb. 20, 2020, in Stateline.

3 thoughts on “Survey: One-third of U.S. residents suspicious of census”