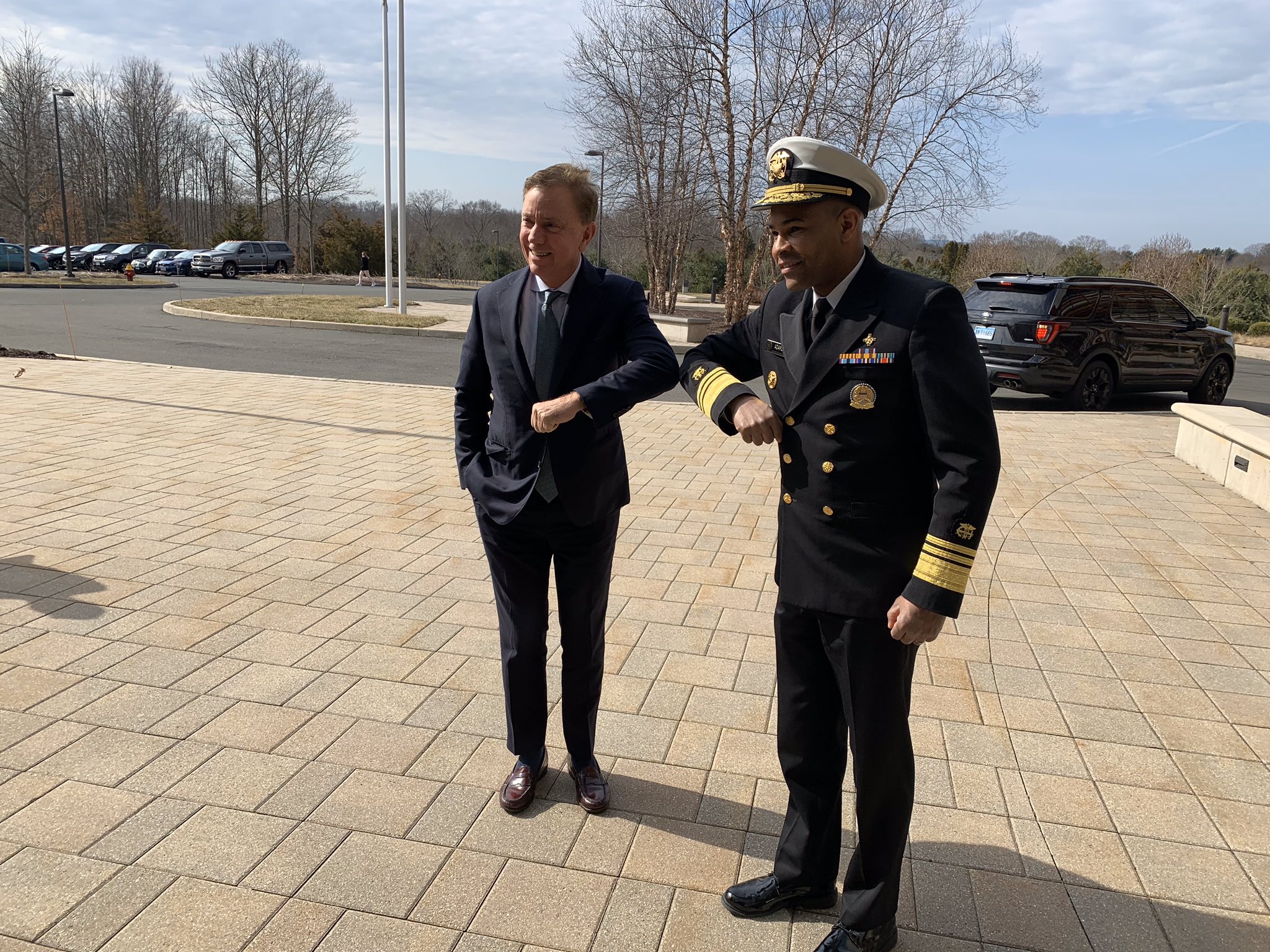 Rocky Hill – Though Connecticut has not yet detected any cases of the pervasive and rapidly spreading coronavirus, state and federal officials called Monday for more funding and better preparation in anticipation of the disease.

“We knew this was coming. We told folks this was going to happen, and that’s why we’ve been preaching preparedness from the very start,” U.S. Surgeon General Dr. Jerome Adams said during a visit Monday to Connecticut’s public health laboratory in Rocky Hill.

“We do expect that we’ll see more cases of community spread, but folks should not panic,” he said. “Caution is appropriate, preparedness is appropriate. Panic is not.”

Nationally, at least 96 people have contracted the virus and six have died. All of the deaths occurred in Washington state.

Globally, the coronavirus is present on almost every continent and has infected nearly 90,000 people. More than 3,000 have died. More than 60 countries around the world, including nine of the 10 most populous, have discovered infections.

“We do expect that we’ll see more cases of community spread, but folks should not panic. Caution is appropriate, preparedness is appropriate. Panic is not.”

Cases have been reported in neighboring states – New York logged its first on Sunday and two people in Rhode Island have tested positive for the disease. Officials in Connecticut said that as of Monday, they had not yet diagnosed anyone with the illness.

The state’s public health lab was approved last week to begin testing for the novel coronavirus. Two residents were negative for the virus over the weekend, and the risk to people here remains low, Gov. Ned Lamont said.

He and others reminded residents to take common sense precautions, such as hand washing, avoiding close contact with people who are sick, covering coughs and sneezes, disinfecting surfaces, and avoiding handshakes.

Adams urged people to stop buying and hoarding face masks. The masks don’t provide broad protection, he said, and people who don’t know how to wear them properly may actually be increasing their risk of contracting a disease.

“Folks who aren’t comfortable wearing a mask will often touch their face more frequently to adjust the mask and can increase their risk of exposure to flu or coronavirus,” he said.

If people from the general public continue to purchase the masks in large quantities, Adams added, fewer supplies will be available for the health care workers who need them. 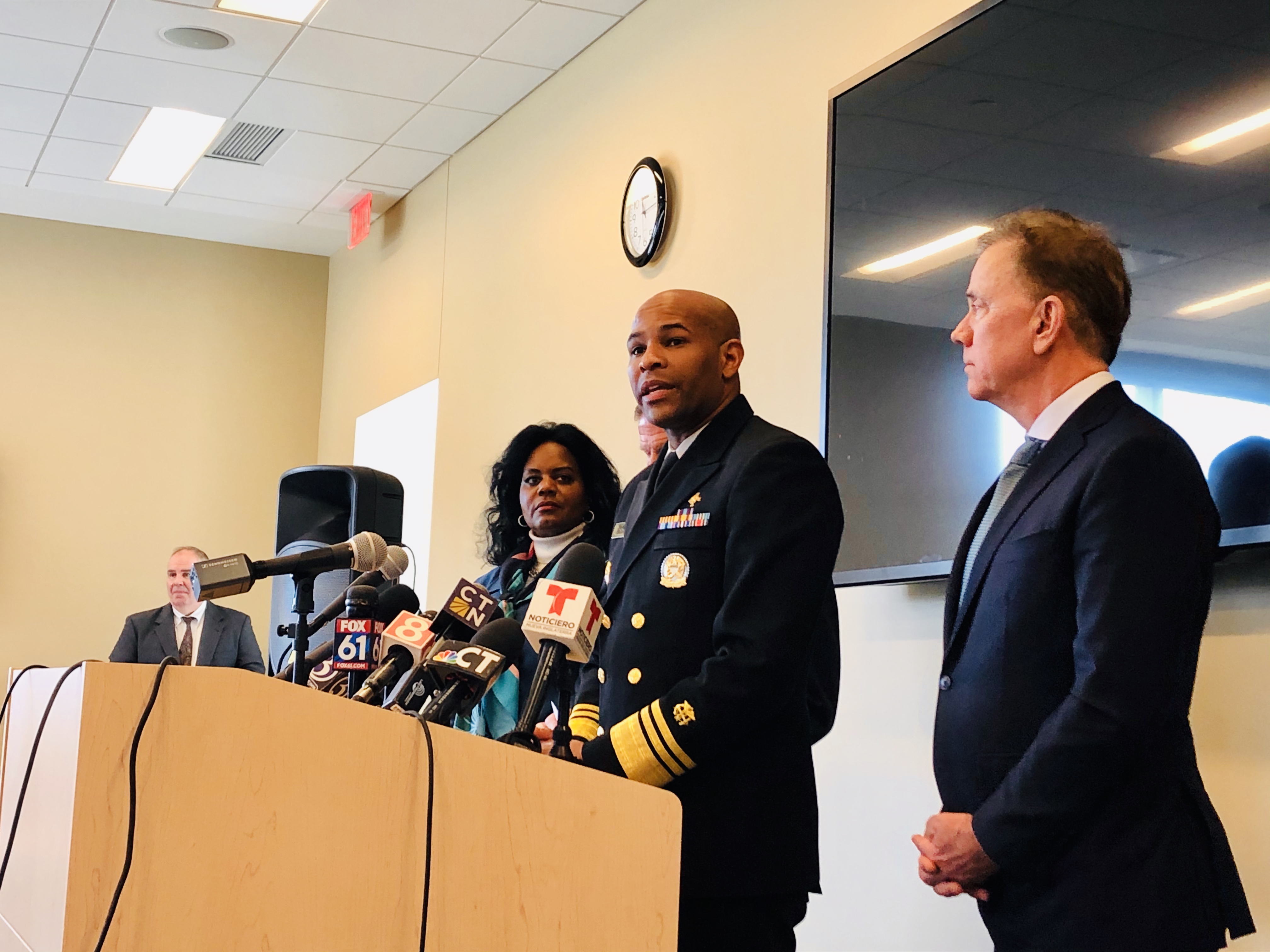 Adams (center) addressing the media during a visit to the state’s public health laboratory to quell public fears about the coronavirus. He is joined by Gov. Ned Lamont (right) and Health Commissioner Renee Coleman-Mitchell (left).

U.S. Sen. Richard Blumenthal said he and his colleagues from Connecticut will push for $8.5 million in new funding to fight the virus, including $3 billion for the public health emergency fund, $2 billion to reimburse state and local governments, and $1 billion to assist in the development of a vaccine. Health workers are still a year to 18 months away from creating the immunization.

“I want to commit to the governor and … to all the people of Connecticut that we are going to fight for the money that is necessary to be effective and stop this disease from becoming a pandemic,” Blumenthal said. “We have Connecticut’s back.”

But even as clusters of new cases spring up around the world, federal officials are warning people to remain calm and vigilant. Adams pointed out Monday that the flu has sickened more people nationwide this season than the coronavirus.

In the United States, there have been 32 million cases of flu, several hundred thousands of hospitalizations and 18,000 deaths, according to the Centers for Disease Control and Prevention.