Slots on your smartphone? Lamont says, ‘No.’ 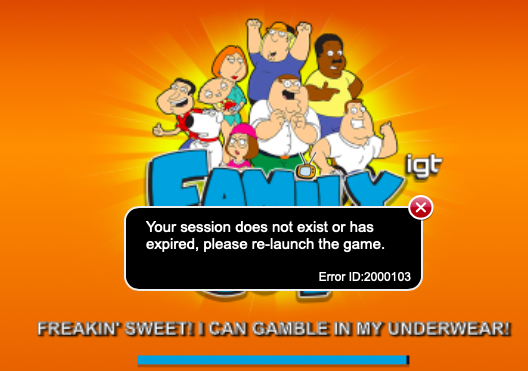 One of the online casino games available in New Jersey colorfully boasts of its convenience. The error message pops up if the site is viewed from outside New Jersey.

Gamble in your underwear? That’s the jaunty come-on for an online slots game with a “Family Guy” theme you can play for cash in New Jersey, where the state’s gambling law allows every adult the convenience of turning their smartphone, laptop and iPad into a virtual 24/7 casino.

It also crystallizes one of the questions now before Connecticut lawmakers: Are they ready to permit the Mashantucket Pequot and Mohegan tribal nations, owners of Foxwoods Resort Casino and Mohegan Sun, to offer their casino games online?

Sports betting has been the focus this week of Gov. Ned Lamont’s public dispute with the tribes over the terms of gambling expansion, but legislation proposed by Sen. Cathy Osten, D-Sprague, and favored by the tribes also would permit online casino games — a far more lucrative prospect for the tribes and state than sports wagering.

Lamont is vehemently opposed, and even some of the tribes’ allies on sports wagering are wary.

“I think we need to be cautious. It’s a major policy shift,” said Rep. Caroline Simmons, D-Stamford, the co-chair of the legislature’s Commerce Committee and a supporter of legalizing sports betting.

Senate Democratic leaders and rank-and-file lawmakers of both parties stood with Osten at a press conference on Jan. 29, when she outlined her bill, but Senate Majority Leader Bob Duff, D-Norwalk, said no one should assume that every attendee was backing the entire bill.

Senate President Pro Tem Martin M. Looney, D-New Haven, said he supports the entire bill: “Whatever we can do to have a robust line of revenue for the state, absolutely.”

But Looney said online casino games might complicate passage of a gambling bill. Most lawmakers are well-acquainted with the pros and cons of legalizing sports betting, but not broader online gambling.

“We haven’t gotten to the point yet of the specifics,” he said.

Rep.Tom Delnicki, R-South Windsor, said his attendance at Osten’s press conference signaled a narrower interest: His desire for the tribes to be able to offer sports betting at their proposed casino in East Windsor, near his district.

As far as potential support for online casino games, Delnicki said he was open-minded: “We ought to look at it. New Jersey is doing it.”

Osten seeings online casino games, also known as “iGaming,” as a crucial piece of a bill she constructed to attract a diverse coalition of support in the General Assembly. It links expanded gambling to greater state aid to cities and towns.

“The only way to get the revenue to the towns is put the iGaming piece there, and that’s why it’s all in there,” Osten said.

The online gambling revenue also is an enticement for the tribes to spend $100 million on a small casino in Bridgeport, a project that Lamont favored. The tribes view a Bridgeport casino as cannibalizing their current customers, not expanding their clientele.

On Tuesday, the administration said publicly what the governor told the tribes privately: Lamont is opposed to Osten’s bill and favors a competing bill that would legalize only sports betting, but under terms opposed by the tribes.

The alternative favored by the governor would permit sports wagering at two tribal casinos, but rights to sports bookmaking outside the casinos would be shared by the tribes, the Connecticut Lottery and Sportech, the licensed vendor for off-track betting. He no longer is seeking a Bridgeport casino.

Connecticut disagrees that sports bookmaking is a casino game, but the Lamont administration has no intention of challenging the tribes’ claims in court. A loss would end the 25% tax on gross slots revenues the tribes pay under the casino deal. Last year, the tax generated $255 million for Connecticut.

Rodney Butler, the chairman of the Mashantucket Pequots, complained in a written statement Thursday that Lamont gave the tribes a take-it-or-leave offer after a long stretch without meaningful negotiations.

“We are at a loss to explain the timing and tone of the statement issued by Governor Lamont on Tuesday,” Butler said. “While he refers to his attempt to negotiate a ‘gaming solution,’ the Governor and his staff have had little to no communication with the Tribes over the last several months — despite our repeated attempts to meet.”

Butler, who flatly rejected the governor’s proposal Tuesday, said he sees “a path forward on gaming if there is a will to take it, and we stand ready to work with any and all parties to make it happen.”

Asked by text if online casino games must remain in any expansion bill, Butler replied by text “that’s not really the sticking point, it’s just a piece of the puzzle.”

Max Reiss, the governor’s communications director, said Lamont would not sign Osten’s bill should it pass. He said the bill favored by Lamont would be a boon to the tribes and state.

“Currently, neither tribe can conduct sports betting at their respective casinos, which only puts them at a competitive disadvantage to their neighboring casinos,” Reiss said in a written statement. “To remedy an issue that has been plagued by litigation, the Governor put forward a proposal to enable the tribes to conduct sports betting on and off their reservations — but would also authorize the other incumbent gaming operators to do so outside the tribes’ reservations.”

The governor’s proposal was more likely to survive a court challenge, he said.

“The alternative proposal that Chairman Butler supports is sweeping and would invite serious legal challenges from a host of competitors,” Reiss said. “It would also grant the tribes the exclusive authority to offer not just sports betting, but also virtually all other casino games on a mobile platform throughout the state and off their reservations. The Governor does not support that proposal and has consistently stated that he will only sign the fair and reasonable resolution, which has been discussed with the tribes, that benefits them and ensures the successful expansion of gaming both on and off of their reservations.”

Backed by Gov. Ned Lamont, the once-troubled CT Lottery has a shot at online sales -- and possibly more.

With Lamont bullish on gambling expansion, the odds improve

Talks over sports betting and online gaming come in an economic and political environment vastly changed since March.

Ready to gamble? Mohegan Sun wants to take your temperature.

The Mohegans want the governor's blessing to reopen the casino. He's not ready to give it.