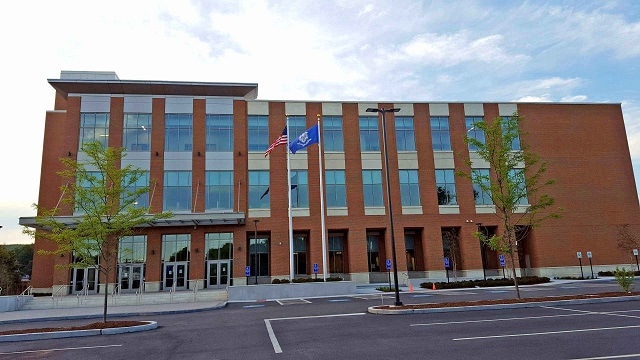 The Judicial Branch announced 11 staffers are in quarantine at home, including one marshal assigned to the Torrington courthouse who tested positive for the coronavirus, a branch spokeswoman reported Tuesday.

And while court officials also have ordered additional disinfecting and cleaning, a spokesman for the marshal’s union says more workers should have been quarantined. The courthouse remains open.

“The Judicial Branch learned today that a member of our staff has been confirmed as having COVID-19,” spokeswoman Melissa Farley wrote in a statement, adding the marshal was assigned to the Litchfield Judicial District Courthouse in Torrington.

The marshal, who learned of the positive test Tuesday, had last reported to work on Friday. He was instructed to contact a medical provider and self-monitor at home for the next 14 days.

The infected marshal had been working in a communications hub, where few other staff are assigned, Farley said.

Farley added the branch has been following U.S. Centers for Disease Control guidelines to screen additional workers for quarantine. In this case that means any staff who came within six feet of the infected marshal for 15 minutes or longer. This led to 10 other employees of the Torrington courthouse being quarantined, including other marshals.

But Joe Gaetano, president of IBPO Local 731, said the branch should have quarantined more employees than it did.

While the infected worker was in a communications hub, he would have had contact with more marshals both during an assembly for shift roll call. In addition, the shift sign-up sheet also is in the communications hub, Gaetano said, adding that would have exposed the marshal to several colleagues. He estimated closer to 18 workers should be in quarantine.

“People sign in and out of the control room at different times,” he said, adding that roll call “normally is attended by all of the marshals on that shift.”