Washington –  As the coronavirus emergency pushes the unemployment rate to historic heights, Congress is rushing to give the jobless an unprecedented amount of money to help them cope.

The massive stimulus bill approved by the Senate and now before the U.S. House would give unemployed workers an additional $600 a week in benefits, above what they are eligible to receive from their state. Those increased benefits would continue for the next four months. 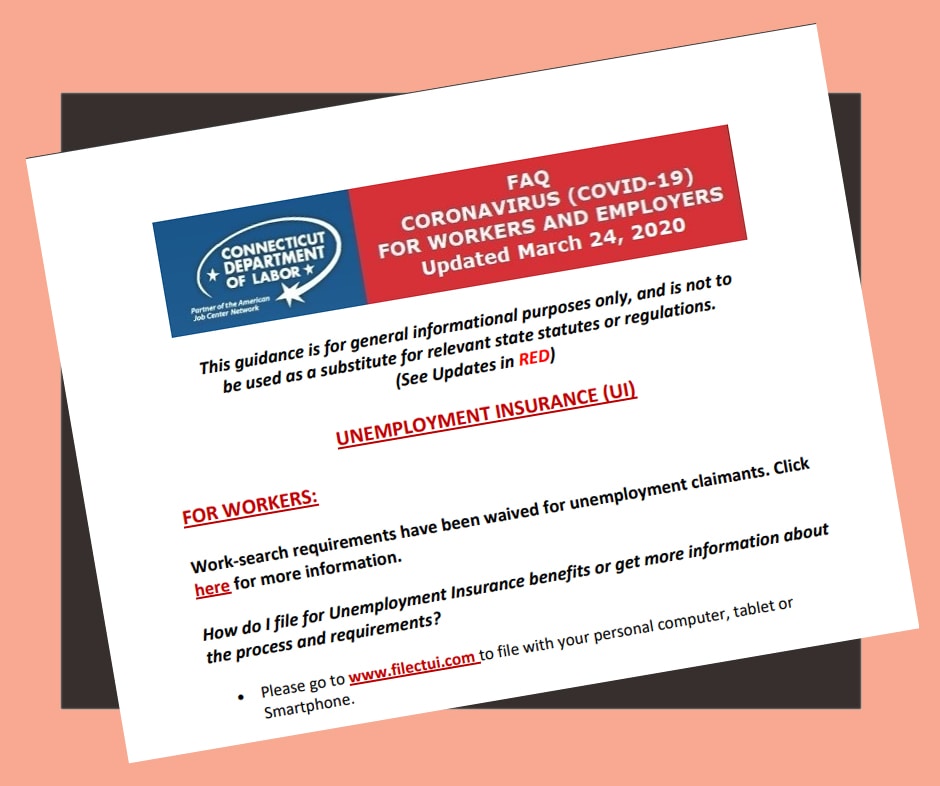 The extra money would be distributed by state unemployment offices. They would have the option of providing the state and federal contributions in one payment, or sending the new federal benefits separately. But both payments must be sent on the same weekly schedule, according to the bill.

Sen. Chris Murphy, D-Conn., said the new “supersized” unemployment program “will be a lifeboat to many people in Connecticut.”

In Connecticut, the maximum weekly benefit is $649. Under the coronavirus rescue bill, that would jump to $1,249.

The bill would give federal benefits to workers who have never before been eligible for help. It would create a new program called Pandemic Unemployment Assistance for self-employed, part-time and contract workers who are typically ineligible for benefits. Neither would it require beneficiaries to be actively looking for work.

Furloughed workers, those in quarantine because they have COVID-19 or fear they have the virus, are also eligible. So are workers who have had to leave their job because they are taking care of someone who is sick or tend to children who are no longer in school or daycare because of closings. A worker needn’t have been employed for a certain number of weeks to receive benefits, and new hires are eligible, as are those who have already exhausted their state unemployment benefits.

However, workers who are able to work from home, and those receiving paid sick leave or paid family leave, would not be covered.

The expansion of unemployment insurance is designed to put money quickly and directly into laid-off people’s pockets in the hopes that they will be able to keep paying their bills and feeding their families and won’t be ruined financially by the pandemic.

Many states have a one-week “waiting period,” meaning that the first week a person is unemployed, they get no benefits. The stimulus package pushes states to waive that period by paying the full cost of that week of benefits.

But it’s unclear how long it would take Connecticut to process claims — especially since the Connecticut Department of Labor is strained by a flood of applications.

“We could even see an unemployment rate around 30 percent in the near future.”

The second coronavirus bill, approved by Congress on March 18, contained $1 billion to help states quickly process claims and get money out to people so they could spend it and shore up a sinking economy.

Connecticut’s Department of Labor did not respond Thursday to questions about how much it received from the federal government or how fast it could process the federal benefits. It has reported hiring dozens of additional staff to cope with the flood of applications.

‘Going through the roof’

Nationally, unemployment claims for last week shot up to a record 3.3 million, nearly five times the historic weekly high 661,000 set at the height of the Great Recession.

Connecticut has about 100,00 claims last week due to coronavirus closings, the Connecticut Department of Labor said on Wednesday.  That’s up from a recent average of about 2,500 claims a week in the state.

“The [unemployment claims] are going through the roof,” said Gov. Ned Lamont in an interview with Yahoo Finance this week.  “The computer system has reached its threshold a couple of times right now.”

Zachary Cohle, an economics professor at Quinnipiac University, said the nation’s unemployment rate is most likely around 10 percent right now. “We expect to see higher unemployment as even more businesses lay off workers as the lockdowns across the country continue,” he said “We could even see an unemployment rate around 30 percent in the near future.”

While the federal government is pushing to protect the unemployed, Cohle said there is a need to focus on creating more jobs after the lockdowns are over. “Workers can only be unemployed for so long,” he said.

The stimulus package also revives “Emergency Unemployment Compensation,”  a 100% federally funded program established in the last recession that provides benefits to individuals who have exhausted regular state benefits, which in Connecticut last 26 weeks.

Unemployed workers will now have an additional 13 weeks of benefits, for a total of 39 weeks.

Unemployment benefits are usually funded by federal and state taxes on employers. But the federal government’s unemployment fund is not large enough to cover these more robust benefits, forcing it to go into deficit spending.