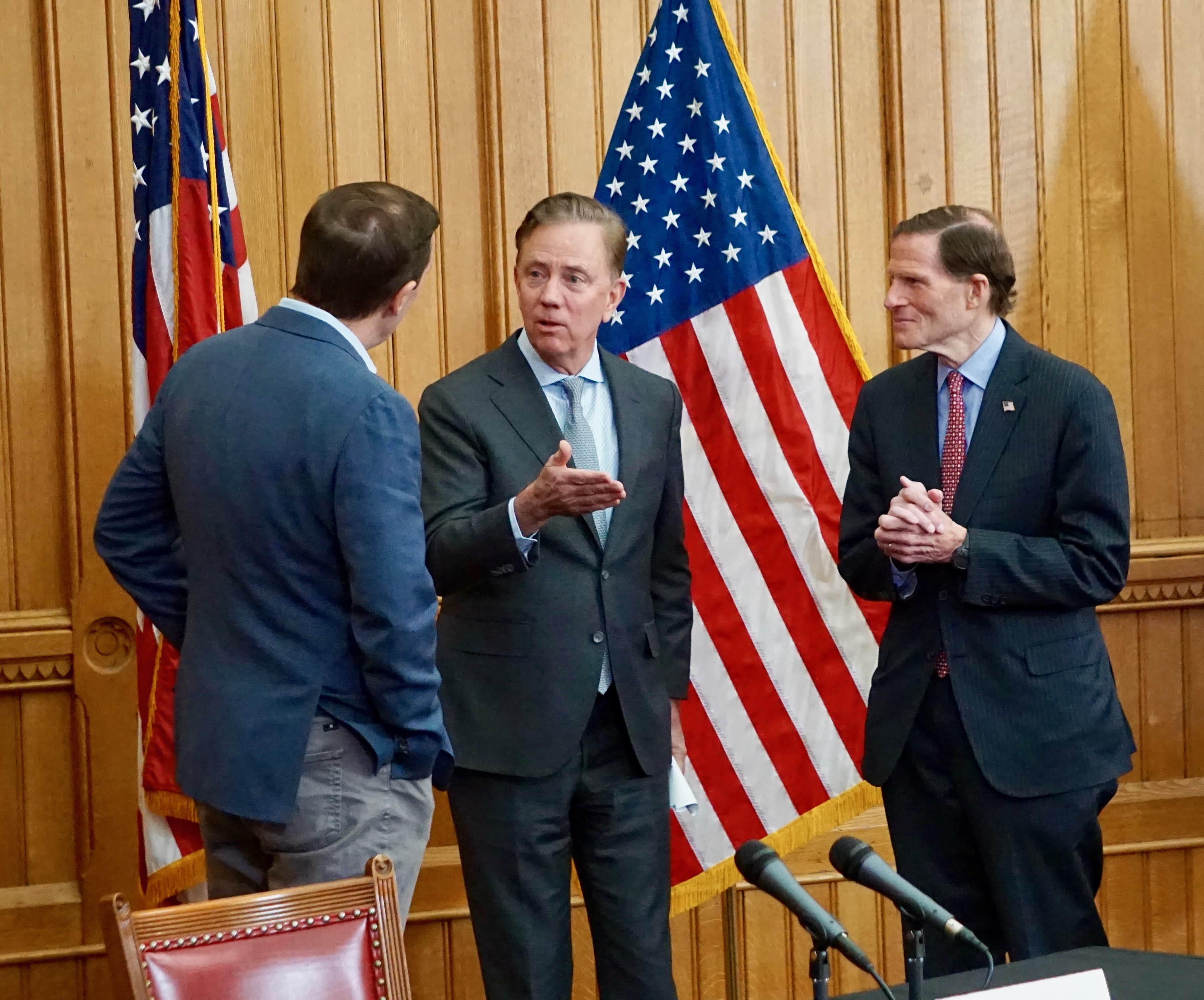 Gov. Ned Lamont asked President Donald J. Trump on Thursday to add Connecticut to the list of states with disaster declarations due to the COVID-19 crisis, citing the state’s proximity to the pandemic’s epicenter in New York. Confirmed cases in Connecticut increased from 875 to 1,012 overnight, a smaller increase than in previous days.

“I don’t think you can make very much of a one-day sample, by the way,” Lamont said. “But it is indicative of how these numbers are going to bounce around.” Short on personal protection equipment, hospitals have slowed the testing and directed more personnel and resources to critical care, Lamont said.

“That tells you a little bit about the demographic risk you have,” Lamont said.

Lamont was joined at his daily briefing by Sens. Richard Blumenthal and Chris Murphy, back in Connecticut after joining in a unanimous vote for an unprecedented $2 trillion stimulus package to offset the significant blow to the U.S. economy while the nation tries to slow the spread of the novel coronavirus.

The senators said the stimulus package is unlikely to be the last adopted by Congress.

In his letter to Trump seeking the disaster declaration, Lamont wrote, “As a neighboring state to New York, with thousands of residents who work in or travel to New York daily, Connecticut is within the epicenter of infection. The virus knows no state boundaries, as demonstrated by the hundreds of positive cases in Fairfield County.”

New York is among the states with disaster declarations. Its confirmed cases more than doubled in recent days to 37,258 as of midday Thursday, including 5,944 in Westchester County on Connecticut’s border. Metro-North trains from Connecticut to New York City, which has 21,393 cases, have be running nearly empty.

Lamont has not issued any special orders to New Yorkers who are relocating to hotels or second homes in Connecticut, but he offered guidance: “If you are coming up, be respectful, stay inside, self-quarantine until you know you’re safe.”

In Connecticut, 607 of its 1,012 confirmed cases as of  Thursday were in Fairfield County, but there are cases in each of the state’s eight counties. The requested disaster declaration would cover the entire state.

“If approved, this disaster declaration request will provide greatly needed assistance to our residents, as well as our local and state governments, so that we can try to bring some relief during this difficult and ongoing challenge,” Lamont said in a statement announcing the request.

Lamont is issuing one new order on social distancing. It was prompted by what he saw taking a walk with his wife, Annie, at the MDC reservoir in West Hartford: Large groups of young people, clustered closed together. His new order will limit social gatherings to no more than five.

The governor said order is meant to underscore what he has been saying for days.

“Listen to your governor,” Murphy said.

In an executive order issued Thursday night, Lamont restricted the sale of firearms and ammunition, allowing transactions only by appointment. He said in the order it was necessary to “limit person-to-person contact as much as possible and manage the large increase in requests for authorizations for such transactions and the resulting burdens on the communications technology and public safety staff responsible for reviewing and providing such authorizations.”

The governor also suspended the state’s 10-cent fee on plastic bags at grocery stores, after concerns that reusable bags that shoppers bring from home could be contaminated with coronavirus. His order also allows clerks to decline to use a customer’s reusable bags.

“We’re going to lift that 10-cent tax,” Lamont said. “It’s contrary to every environmental instinct I’ve got in my core, but I think for now, I want to make sure the folks working at [grocery stores] feel safe.”

Those new rules will be in effect until May 15.

COVID-19 Scammers Cashing In On False Claims Tied To Census

Also on Thursday, the Connecticut attorney general warned residents about scams fraudulently claiming that Americans must respond to the 2020 Census in order to receive federal stimulus checks.

State officials said some scams have involved a fake Census website, where users are asked to divulge personal information.

“Bad actors are always looking for ways to profit off of people’s fears and anxieties,” Attorney General William Tong said in a statement. “There is zero connection between your 2020 Census response and any economic stimulus aid. If you receive any text messages, phone calls or emails falsely claiming this, please report this to my office immediately.”

In another coronavirus hit to the economy, a recent survey of Connecticut aquaculture producers shows that sales revenue in that industry plummeted in February and March — a 93 percent drop compared to the same period last year.

Job losses from the shutdown have also wiped out 70 percent of the workforce employed in shellfish, seaweed and finfish farming operations, according to the survey conducted by Connecticut Sea Grant, UConn Extension and the Connecticut Department of Agriculture.

Producers largely attribute the losses to Lamont’s order to close down restaurants and bars statewide. Several aquaculture farmers have shifted to local farmers markets and online sales, but layoffs continue.

Connecticut Sea Grant said 251 full- and part-time employees have been laid off in February and March. Most of the state’s aquaculture operations are small, the agency said, employing less than five people.

The Connecticut Judicial Branch announced Thursday that it will temporarily close three courthouses to help limit the spread of coronavirus.

The courthouses that are closing are the Litchfield Judicial District in Torrington; the GA #19 courthouse in Rockville; and GA #11 in Danielson. All three will close at the end of Friday.

Starting March 31, the remaining open courthouses and two juvenile courthouses in Hartford and Bridgeport will curtail its hours, with staff leaving for the day at 2 p.m.