An infant has died from COVID-19 in CT; state turns gymnasiums into mobile field hospitals 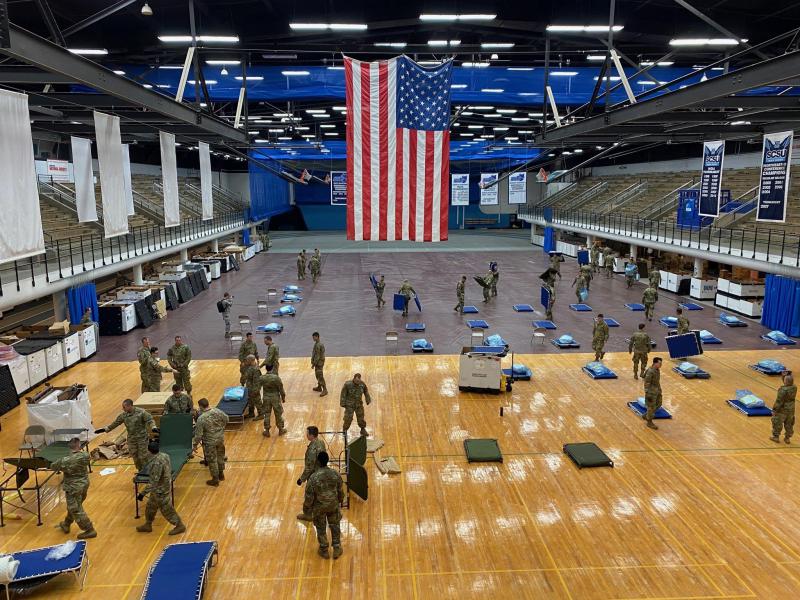 Connecticut began what’s expected to be its worst month of illness, death, and hospitalizations from the worldwide COVID-19 pandemic with the grim announcement Wednesday that the disease has claimed its youngest victim to date — a six week old baby.

The disease that has claimed the lives of 85 people in Connecticut so far, the vast majority of them over the age of 70. The infant’s death was one of the 16 new fatalities the governor’s office reported Wednesday.

The child, who was from the Hartford area, arrived at the hospital unresponsive and later died, said Gov. Ned Lamont said. The baby was tested for the disease postmortem, the governor said.

“Probably the youngest person ever to die of COVID has died here in Connecticut,” Lamont said. “It just is a reminder that nobody is safe with this virus.”

The governor’s remarks came after he toured a mobile hospital at the Moore Fieldhouse at Southern Connecticut University in New Haven Wednesday afternoon. State officials are reporting 429 new confirmed COVID-19 cases since yesterday, for a total of 3,557, and 158 additional hospitalizations.

Speaking outside the Moore Fieldhouse at Southern Connecticut State University, Steven Choi with the Yale School of Medicine said, “the worst weeks are ahead of us.”

Together, both gymnasiums will house around 450 beds for coronavirus patients. 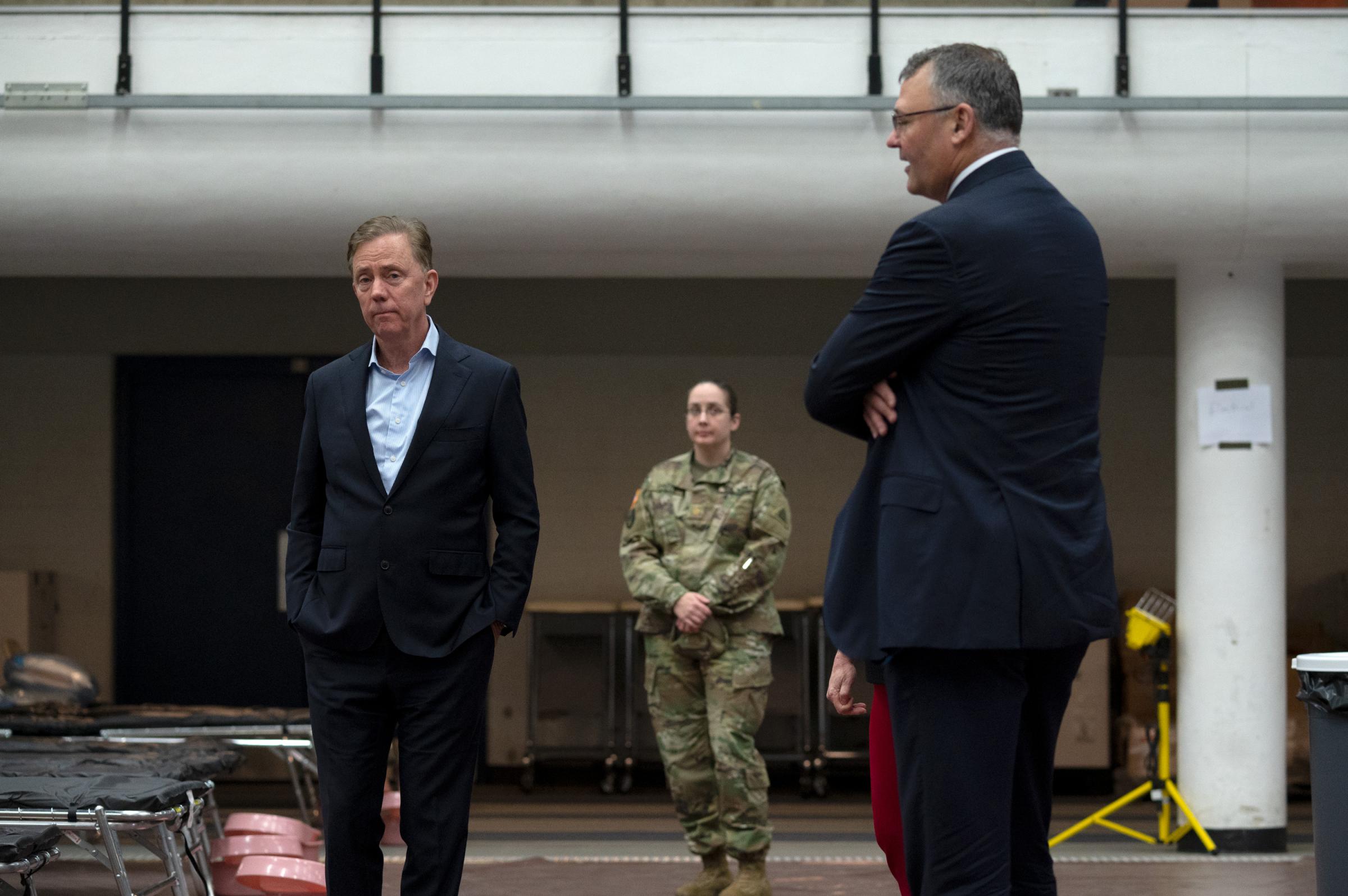 “This field hospital allows us to transfer recovered COVID patients out of our hospital, who can then recover here,” Choi said. “Patients who do require some oxygen, IV fluids, assistance with food, can come here [and] be placed safely away from other household members.”

In addition, Southern also made nine residence halls and 2,500 rooms available for emergency use. They are expected to be ready by the end of the week, according to Leigh Appleby, a spokesperson for Connecticut State Colleges and Universities.

Lamont said Tuesday the U.S. Strategic National Stockpile of medical supplies was nearly empty and, “for now, we are on our own,” to get ventilators, masks and other badly needed PPE.

“We need it,” Lamont told reporters Wednesday. “We don’t have the capacity to protect all the people that we need to.” 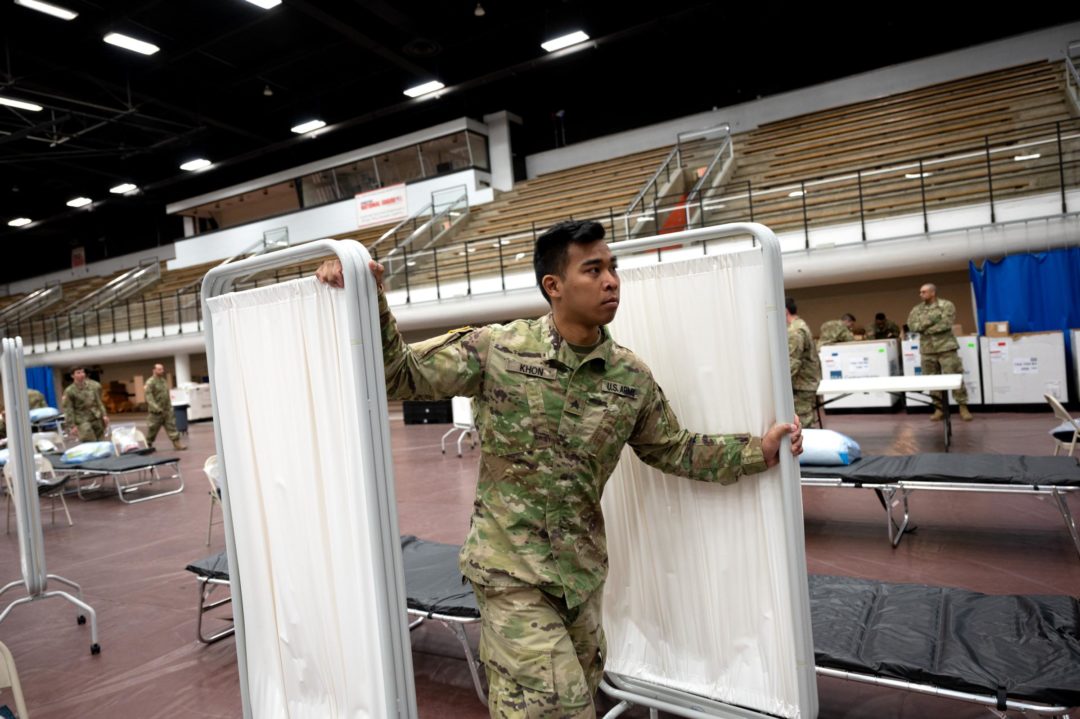 A member of the Connecticut National Guard moves dividers that will be placed between patient beds in a mobile field hospital at Southern Connecticut State University.

Meanwhile, the list of executive orders related to COVID-19 continues to expand.

Lamont said Wednesday he plans to sign another executive order, which will formalize an earlier agreement among grocery chains to limit the number of customers inside their stores to no more than 50% of the building’s fire code capacity.

Lamont said Wednesday the state has launched a new charitable organization called “4-CT,” which will help support state non-profits during the COVID-19 pandemic.

Lamont said the charity had already raised more than $10 million in funding from 20 donors, including himself.

“Early money is like yeast,” Lamont said. “I believe in this. I believe they can move fast. I think getting that money to the people most in need soon is best. I wanted to lead by example and I’m really proud of many other donors who have come on board.”

Right now, 4-CT is planning to support 26 daycares for the children of healthcare workers and first responders. Some will be located near hospitals.

Beth Bye, commissioner of the Office of Early Childhood, said she has received commitments so far for 24 childcare centers. She said 10 are currently operational.

“The other 14 should be up and running within three to four days,” Bye said.

Individuals looking to donate can do so on the agency’s website.

“This closing will allow for a comprehensive cleaning and sanitization of the courthouse,” Carroll said. “The employees who may have been exposed to the other employee who was exhibiting COVID-19-like symptoms have been instructed to self-quarantine at home for 14 days or until such time as test results are received regarding the employee who was exhibiting COVID-19-like symptoms.”

State officials are urging residents to limit their visits to state parks, threatening fines or, in extreme cases, felony charges for possible violations.

In a statement Wednesday morning, the Connecticut Department of Energy and Environmental Protection said state parks remain open for solitary recreation, but parking restrictions are in place at some state parks to limit visitors and encourage social distancing.

“No state parks have closed to visitors entirely due to COVID-19,” said DEEP spokesperson Will Healey, in an email Wednesday.

But the DEEP said it has still observed people circumventing parking restrictions by parking their cars outside of the state park and walking inside.

“These penalties include fines and even arrest, up to and including Class D felony charges for interfering or obstructing any lawful civil preparedness activity,” the DEEP said in a statement. “In addition, any person who violates the ban will be subject to a 30-day eviction from all State Parks and other lands under DEEP’s oversight.”

DEEP manages more than 100 state parks and more than 30 forests. Residents are advised to monitor @CTStateParks for updates.

Meanwhile, the Metropolitan District of Hartford is also limiting access to its public walking trails.

“Per the CT Department of Public Health, anyone using public watershed recreational areas in CT, such as MDC’s West Hartford Reservoir and Reservoir #6 in Bloomfield, must maintain social distancing of 6 [feet] or more when walking, hiking, jogging or biking,” Salemi said in an email. “Due to MDC’s limited staffing availability as a result of the ongoing COVID-19 crisis, failure to comply with these protocols may force the closure of MDC recreational facilities.”