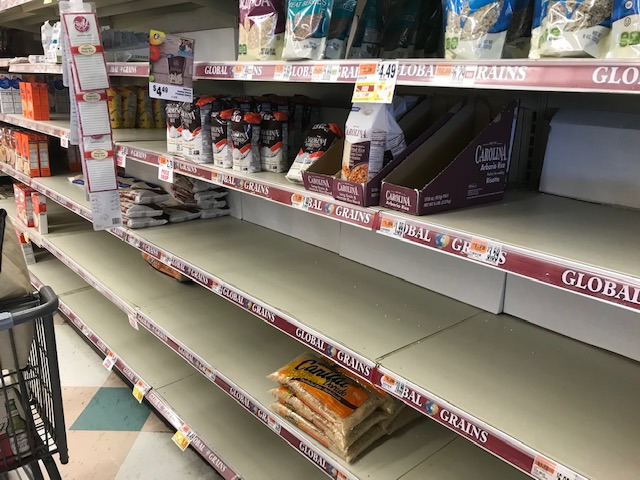 Store shelves are more full than earlier in the pandemic, but still much more empty than in “normal” times and some items — like eggs, flour and paper products, are in short supply.

Connecticut grocers said Tuesday they’ll limit the number of customers allowed inside their grocery stores. The new guidelines will cap crowds at no more than 50% of a store’s local fire code capacity and will be enforced by store staff.

The Connecticut Food Association said the goal is to encourage customers to limit grocery trips and, if at all possible, to go alone.

“We don’t think it leads to anything much different than what people are seeing,” said Wayne Pesce, president of the association, which represents a number of large grocery chains across the state.

Pesce said some of the member stores agreeing to the changes include Stop & Shop, Big Y, ShopRite, Price Rite, Adams Hometown Foods, Geissler’s, Highland Park Market and IGA. “We’ve all agreed that we need to do more to help limit the amount of people and help keep people safe,” he said.

Pesce said stores will self-police the measures by assigning staff to count customers entering and leaving a store.

He said grocery retailers across Connecticut have been recovering from recent panic-infused spikes in consumer demand. And he doesn’t believe the capacity changes will lead to major access issues for most consumers.

“We’re not looking to have lines outside of stores,” Pesce said. “That doesn’t solve the problem because now you took a problem of social distancing inside the store and put it outside the store. So that’s not the solution. We think a better solution is for folks to come shopping one at a time when they can.”

If individuals can’t come alone due to family or child care issues, exceptions will be made, Pesce said in an email. “We understand there will be people who can’t abide. [We’re] asking consumers to use common sense during a difficult time.”

Gov. Ned Lamont’s executive orders to limit social and recreational gatherings don’t apply to retail, according to a spokesperson for the governor’s office.

Part of the impetus for this voluntary statewide recommendation came from the city of Norwalk, which has more than 270 COVID-19 cases. City leaders there wanted more aggressive statewide crowd limits and called on retailers to come up with a statewide plan.

Some stores have already been taking social distancing precautions.

In an email, Stop & Shop spokesperson Maura O’Brien said stores have added signs inside asking customers to remain a safe social distance apart, installed floor markers at registers to “delineate to customers how far 6 feet is from another individual” and put up plexiglass guards at registers and pharmacies “to add additional protection for our associates and customers.”

Last week, Rhode Island enacted an even stricter measure than the one recommended by the Connecticut Food Association. That state is limiting customer access to no more than 20% of a retail building’s fire capacity.