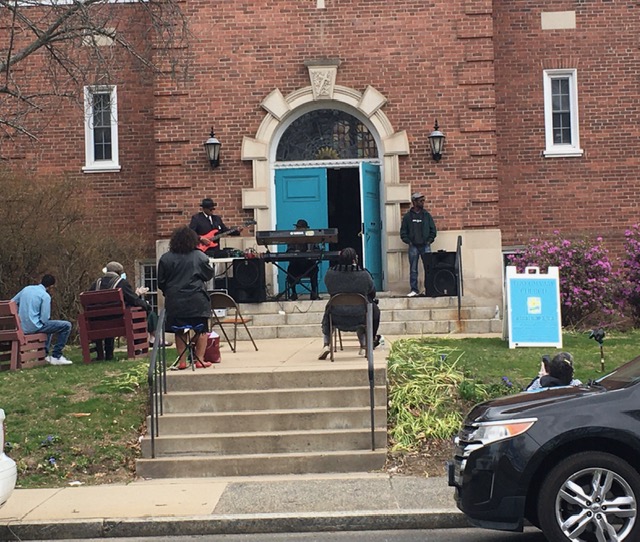 The sanctuary was off limits, so the First Calvary Church worshipped outdoors.

Evanna Holloway sang about Jesus, riffing as she paced outside the red brick church her husband, Pastor Derrick C. Holloway Sr., rents every Sunday on Asylum Hill in Hartford. She sang of faith, reward and redemption. And she sang about washing your hands.

“Today is not an ordinary day,” she half-sang and half-murmured into a wireless microphone. “One of a kind.”

That’s what she was singing when I stopped on my bicycle, drawn by the music echoing over the light traffic. Holloway sang from the sidewalk. She was accompanied by a keyboardist, barely visible from the street. A man in a dark suit, dark hat and dark glasses played a red electric bass guitar from the church steps.

It was Palm Sunday in the midst of a pandemic, and churches were closed. No, not an ordinary day.

But one of a kind?

Even her husband, the pastor, isn’t sure. He follows the projections, the ones that warn that COVID-19 cases won’t peak in Connecticut for another month. He is unsure when the churches will reopen, but it won’t be next Sunday on Easter. 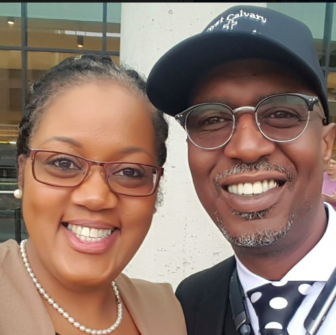 On Sundays before the arrival of the virus, the sanctuary of Grace Lutheran Church on Woodland Street, two blocks from St. Francis Hospital and Medical Center, would be open to her husband’s congregation of 45 or so. Every Sunday at 12:15, the pulpit belonged to the Dr. Derrick Holloway, pastor of First Calvary Church.

“We’re the second church on the marquee over there,” he said.

The CT Myanmar Baptist Church, as they are listed on a sign just below the one for First Calvary, gets the church for Sunday worship at 3 p.m. But their mutual landlord, Grace Lutheran, is barring services from the sanctuary for reasons of public health, trying to slow the spread COVID-19.

And so they worshipped outside on Palm Sunday, drawing the faithful and the curious.

“We just tried to do something to say, ‘We’re still here.’ The weather held up nice,” Holloway said.

Holloway has a day job: He is a supervisor at the state Department of Transportation, a job deemed essential by governor. He believes his other job, the pastoral one he’s held for the past seven years shepherding First Calvary, also is essential.

“This one helps with the secular,” Holloway said of his job as a pastor, an avocation not limited to Sundays.  “One’s going to influence the other. It balances out. I have a lot of guys who are nervous now. It helps there. It all works. It works out good.”

The DOT supervisor said he understands the public-health measures ordered by his secular boss, Gov. Ned Lamont, who has banned gatherings of more than 10 and recommends against any with more than five.

As a pastor, he worries about the small churches that exist, like many of their flock, from paycheck to paycheck. Many churches are small businesses with the worldly concerns of rent, heating, electric bills and payrolls.

Holloway said he was one of the pastors on a recent conference call with the governor and the state’s two U.S. senators, Richard Blumenthal and Chris Murphy.

The pastors are interested in learning more about the CARES Act, the third coronavirus relief measured passed by Congress and signed by President Trump. It treats religious organizations as small businesses, giving them access to forgivable loans if they can maintain their staffs.

On Sunday, Holloway was concerned with keeping the flock safe. He discouraged older members and a few who are sick from attending Palm Sunday worship on the sidewalk and worn lawn outside Grace Lutheran. Surgical gloves were donned when it was time for communion.

A congregant held a phone and streamed video of the service.

“They did Facebook live. We’ve been trying to figure out what type of media we’re going to use. We did Zoom last week,” Holloway said, referring to the video-conferencing service suddenly in vogue. “We tried that. We’re just going to try to continue to explore. It’s new to everybody.”

“She was going to walk with her class this year,” he said.

But there will be no graduation ceremony, and the only recent buzz of activity at Southern was the arrival of the National Guard to convert a field house into a military hospital.

On the sidewalk, microphone in hand, he reminded everyone during his sermon to keep a social distance, even as he said everything was in the Lord’s hands. With only a half-dozen before him, the distancing was easy. He said they were the church, not the brick building at his back.

Others from outside his congregation gathered, none dressed for church.

There was me, the bicyclist wearing black Lycra bike pants, a Day Glo yellow reflective jacket, black helmet and sunglasses. A woman invited me to take communion. A man offered palm fronds. I declined communion and accepted the palm fronds when he suggested tying them to my bike.

A gray Mercedes stopped on Woodland Street and a man in a baseball cap stepped out, leaned against his car and listened to the music, then the sermon. Another car stopped on the side street, but never pulled over. The window lowered and the driver, a woman wearing a surgical mask, scanned the small congregation, as though searching.

Then she saw the congregant holding palm fronds for distribution.

“May I have a palm frond?” she said. She it again, louder and more urgently, interrupting Holloway. “Please!”

Holloway looked to his right, then nodded.

The frond was delivered to the car.

The woman offered thanks, expressed relief. She said she thought there would be no palms on this Palm Sunday.

Holloway told the congregation there are mysteries beyond man, a novel coronavirus among them.

Whatever is coming, Holloway said, salvation is available to all.

“If it is not his will that we be saved, we ask that he helps us to understand his will and to abide by his will, and to give us peace in the midst of this storm,” Holloway said.

He paused, waiting for agreement.

Finally, from the man at the Mercedes, came an amen. 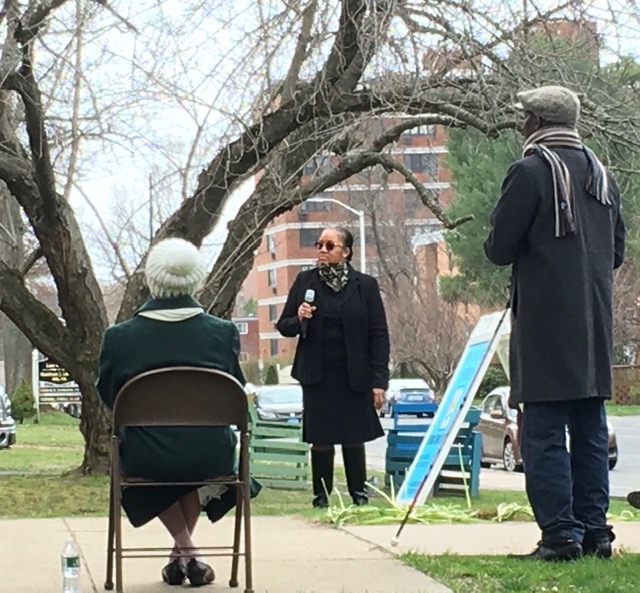