There are 166 positive cases among the incarcerated, an exponential increase in under two weeks 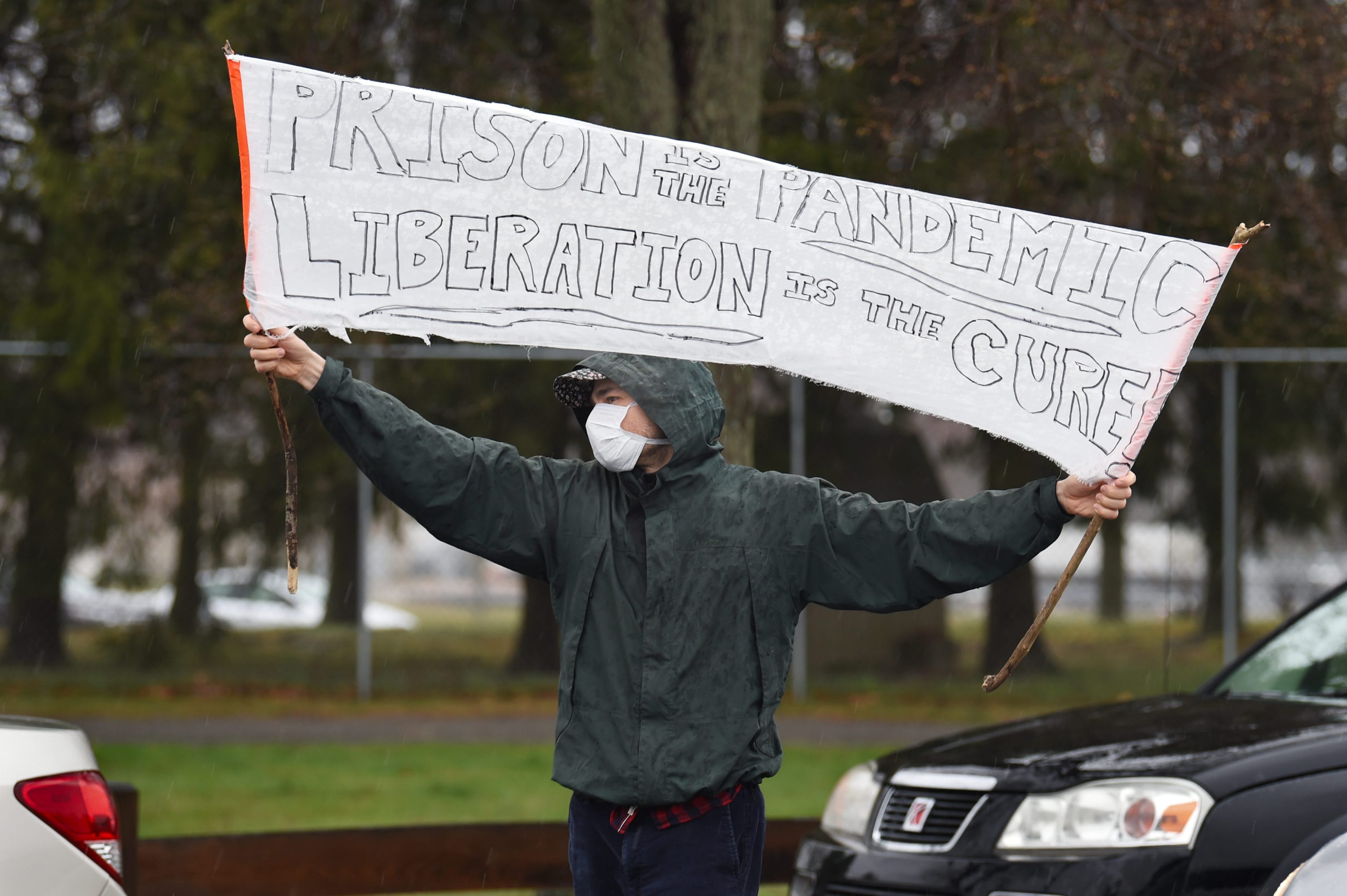 A protestor holds up a sign calling for the freeing of prisoners at York Correctional Institution in Niantic, Monday, April 13, 2020, during a car protest by community organizers and prison advocates in a park next to the women’s prison. They were calling for the release of prisoners who are at risk of infection from COVID-19.

An incarcerated person died from COVID-19 on Monday, the first Connecticut inmate to succumb to the virus as the numbers of positive cases behind bars continued to spike.

The man was in his 60s and had underlying medical conditions, according to the Department of Correction. He had been approved for discretionary release in March but authorities could not find an appropriate home sponsor, so he remained behind bars. Authorities transferred him to the UConn Health Center on April 8 for intensive treatment of his illness. He died on April 13.

“My sympathies go out to the offender’s family,” DOC Commissioner Rollin Cook said in a statement. “One death is too many, he joins the more the approximately 600 Connecticut residents who have lost their lives to this tragic disease. We will continue to do everything possible to keep the offenders and staff safe.”

The man was serving a two-year sentence for criminal possession of a firearm.

As of Monday evening, 166 of Connecticut’s 11,516 inmates had tested positive for COVID-19, as have 104 staff members. That is a sharp increase from the beginning of the month. On April 2, 16 staff and eight inmates had positive results.

Last week the Department of Correction announced that most of the men who are infected with the virus will be housed at Northern Correctional Institution in Somers, the state’s most secure prison. The penitentiary has seen a dramatic population decline since January 2019, giving the department ample space to house the sick. As of Monday, Northern’s isolation unit held 107 people who have the virus.

People with relatives and loved ones behind bars say that keeping COVID-19-positive people isolated in Somers may cause problems beyond the virus: the forced solitude and quarantine in a prison cell the size of a parking space could exacerbate existing mental health issues.

Though the state’s incarcerated population has shrunk significantly since the first COVID-19 case was documented in Connecticut – there are 893 fewer people in Connecticut jails and prisons today than on March 1 – the uptick in the incarcerated population has led to stepped up calls for Gov. Ned Lamont to release people to spare them from contracting the virus behind bars.

Scores of people gathered outside the governor’s mansion on Easter Sunday demanding he take action. The demonstrations will continue throughout the week, as community organizers and family members with incarcerated loved ones will meet at correctional facilities throughout Connecticut and demand officials release inmates to mitigate the virus’ spread behind bars.

The governor has cancelled two meetings with families of incarcerated people to talk about limiting the spread of COVID-19 in prisons and jails and to explain the statutory powers he has to release people from correctional facilities.

“Here are our loved ones’ lives that are in the governor’s hands right now,” Bivens said. “This is only going to get worse if nothing happens.” 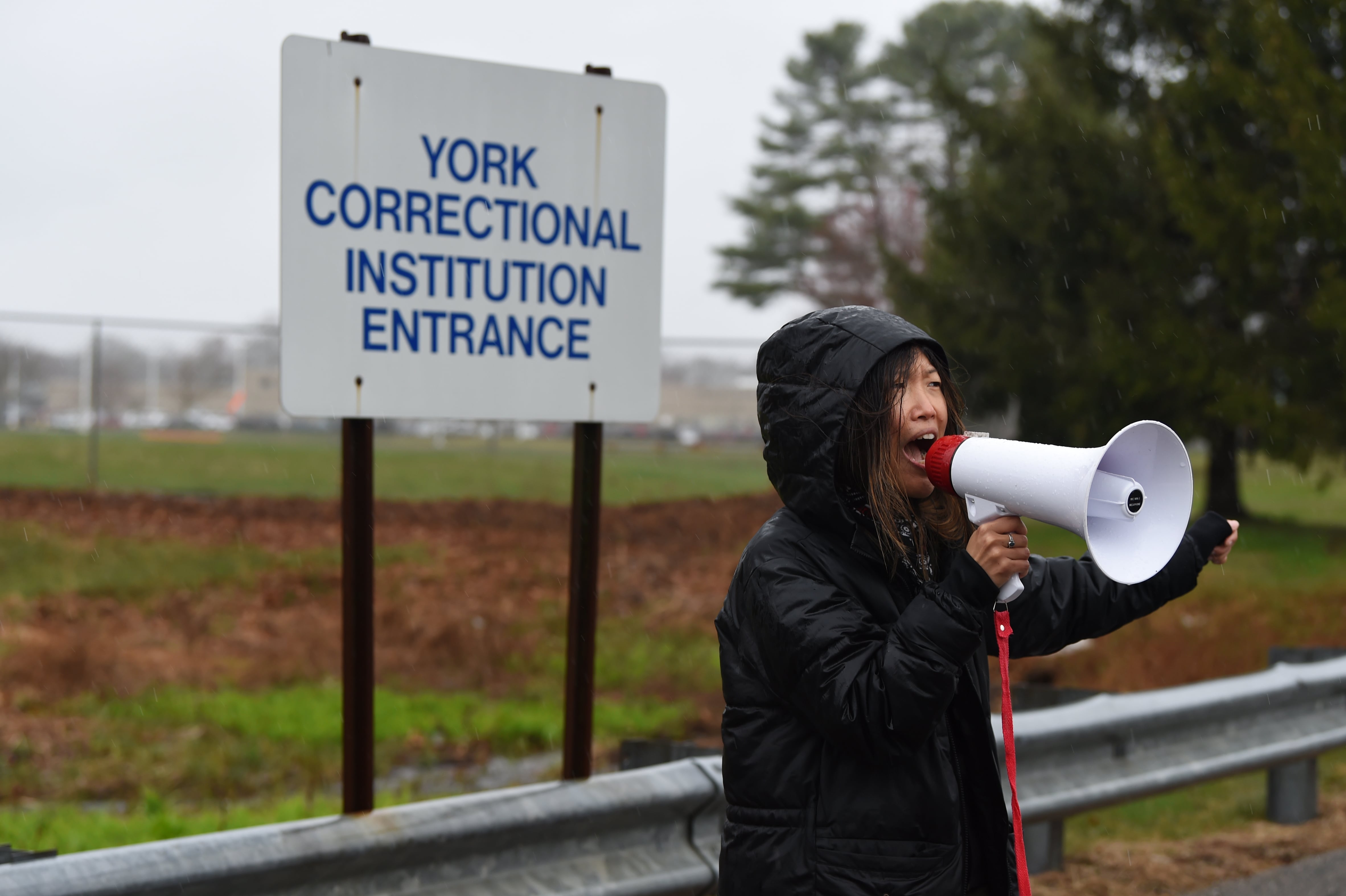 Jennia Fu chants “Free our sisters! Free our sisters now!” through megaphones during a protest in front of York Correctional Institution in Niantic on April 13. Fu was part of a group of about two dozen community organizers and prison advocates taking part in the latest of a series of car protests calling on action from Gov. Ned Lamont and the Department of Corrections to protect prisoners from the virus.

At his daily public briefing on Monday, Lamont said officials were opening up previously closed sections of correctional facilities to spread out elderly or otherwise medically vulnerable people so to minimize their risk of contracting the virus.

And Winfield has publicly suggested that Lamont should charge state agency commissioners, members of the Judicial Branch, state’s attorneys, public defenders, police and the Board of Pardons and Parole to work together to speed up releases without endangering public safety or straining community resources.

Winfield said he wasn’t sure how the state’s first inmate death would affect his advocacy.