‘I feel like I am just sitting here waiting to get sick’: behind bars during COVID-19

An ACLU affidavit provides a first-person look inside Connecticut prisons 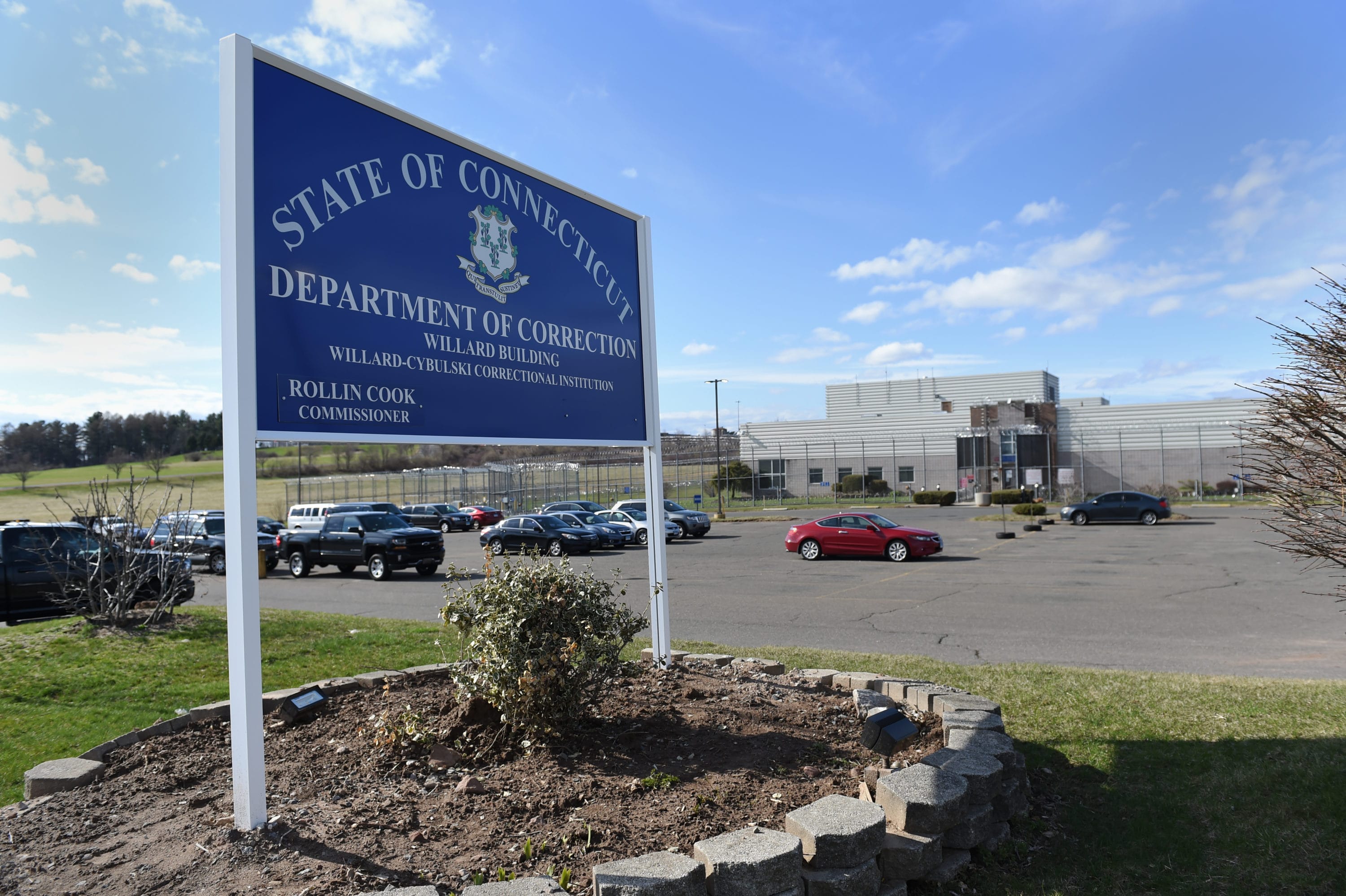 The Willard-Cybulski Correctional Institution in Enfield was placed on lock down in early April after several inmates tested positive for COVID-19.

From inside his 12-by-7-foot cell at Northern Correctional Institution, Roger Johnson could hear a lot of coughing. When he peered through the cell’s sliver of window into the prison, which houses the majority of incarcerated people infected with COVID-19 in the state, he could see sick men on stretchers and in wheelchairs getting carted around by staff clad in hazmat suits.

Inmates would kick their cell doors, clamoring for a phone call so they could talk with their loved ones. It took three days before authorities let Johnson dial his mother.

“That was the only time I got out of my cell when I was at Northern,” Johnson, 55, said in an affidavit filed by the ACLU of Connecticut on Wednesday. The new legal filing to its state lawsuit, filed earlier this month, features sworn statements from six inmates held in six correctional facilities around the state, shedding light on what life is like for the 11,278 people currently locked up here.

The ACLU of Connecticut has filed lawsuits in state and federal courts aimed at reducing the number of people behind bars to prevent the spread of COVID-19 there. As of Wednesday, 321 incarcerated people and 224 staff have tested positive for the virus. More than 150 COVID-positive inmates were held in the isolation unit at Northern, and 149 people had, like Johnson, been medically cleared and sent back to the correctional facilities where they were held before contracting the virus.

The new affidavit features sworn statements from inmates other than the original suit’s named plaintiffs, all of whom the state has argued are ineligible for release “prior to the end of their lawful sentences.” The legal remedy sought by the ACLU would apply to all of the incarcerated population, not just the plaintiffs named in its suits. Adding more voices provides additional and more recent information to its case.

Another man included in Wednesday’s affidavit is Ken Pierce, 39, who has been incarcerated for three non-violent felonies at Carl Robinson Correctional Institution. He said he had been approved for release to a halfway house last October but can’t leave prison because he’d been told they weren’t accepting new clients.

I feel like I am just sitting here waiting to get sick, and there is nothing I can do to protect myself.”— Ken Pierce

“I know I committed a crime, and that’s why I’m here. But I also feel like I earned my release date,” Pierce said. “Right now, I feel like I am just sitting here waiting to get sick, and there is nothing I can do to protect myself.”

Before the pandemic, Johnson had been a detail worker incarcerated at Cybulski Correctional Institute. His job was to clean Northern, located less than a mile away, a duty he did without wearing a mask or a hazmat suit. He stopped working at the prison on March 28, after a kitchen worker tested positive for the virus, according to the affidavit.

Two days later, he had a fever, and medical staff at Cybulski checked his vitals. He and two others were tested for COVID-19. The nurses called them “little Covies” even before they got their results back, according to the affidavit. The three men were moved to a separate unit at Cybulski a few hours after the test. They cleaned their new living space themselves, Johnson said.

Once their tests came back positive, the sick men were again moved, this time to a mold-infested cell in the penitentiary’s segregation area. They weren’t allowed to call their emergency contacts to tell them they had the virus.

“I just felt like an animal, the way they did this,” Johnson said.

Johnson was transferred to Northern on April 7, when the Department of Correction began transferring the majority of COVID-positive inmates there. He spent five days at Northern before getting sent back to Cybulski. When he returned, his peers were taking Tylenol to hide their symptoms so they wouldn’t get transferred – Northern, the state’s most secure prison, is known for its unpleasant conditions.

“Nobody wants to go there,” he said. “Meanwhile, a lot of guys I know are telling me they probably have the virus because their bodies are aching, they lost their smell and taste, but they don’t want to get tested.”

The impossibility of social distancing behind bars

Sworn statements from Johnson, Pierce, and the four other men included in the ACLU’s legal filing detail widespread concern about correctional facilities’ ability to keep inmates safe from the virus.

Tyrone Spence, a 28-year-old incarcerated at Garner Correctional Institution, shares a cramped cell with one other man. “It is impossible to stay more than five feet away from one another,” he said.

They clean their sleeping space once each week using a broom, mop and cleaner provided by staff. The cleaning solution is diluted.

“If I want to clean my cell any other day of the week, I usually use shampoo,” he said.

In my experience, it can take months to see a doctor, even when there is not a global pandemic going on”— Ken Pierce

Spence said he spends about three-and-a-half hours outside his cell each day. During that time he can lift weights or play chess, ping pong or cards. Sometimes more than a dozen people use the workout equipment during recreation time. It is not cleaned between each person’s repetitions, though some inmates wear gloves, he said.

All the men in Spence’s unit share six phones, which aren’t cleaned between calls. He said he slides a sock over the phone or slips it under his shirt before he makes a call to protect himself from germs.

Others echoed Spence’s observation that the phones aren’t sanitized between uses. Frank Kelly, a 25-year-old also incarcerated at Garner, said one person is responsible for cleaning the entire unit where he is housed. That space includes a common area, showers, outside recreation area, counselors’ units, phone booths and individual cells.

“He cannot clean the unit sufficiently each day,” Kelly said.

Multiple inmates said that not all correction officers wear masks when they’re at work. Incarcerated people have been given masks that appear to be made of the same material as their prison uniforms, though not all of them wear them, according to statements in the affidavit.

The dorm where Pierce lives at Robinson is cleaned three times a day, he said, though inmates haven’t been given extra cleaning supplies to help prevent the spread of COVID-19.

Pierce fears what will happen if the virus overwhelms the prison. Last year, his ear bled for two days while he waited to see a medical professional about an ear infection. A nurse gave him antibiotics, but he never saw a specialist.

Pierce sleeps in a dorm with about 90 people. Because of the quarantine, he rarely leaves. He eats each meal off his lap, sitting atop his bunk. When he isn’t in bed, he can walk around the dorm or into a small dayroom space attached to his living space.

“But there is not much more space where we can go,” he said. “I feel like it is just a matter of time until we all get infected with the virus.”