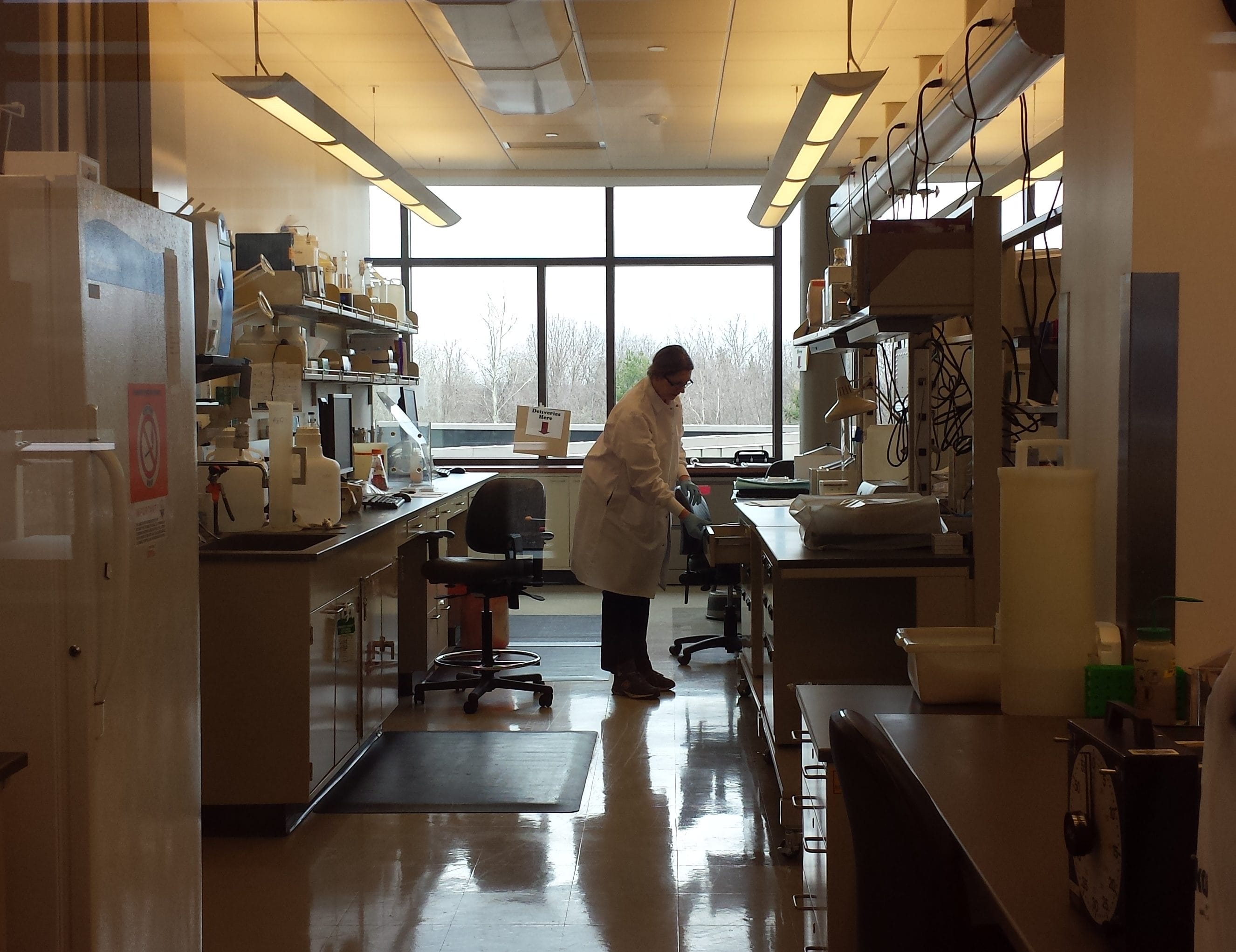 A lab where the infectious viruses are tested at the State Public Health Laboratory in Rocky Hill.

The state testing laboratory in Rocky Hill has become a key weapon in Connecticut’s battle against the coronavirus pandemic, and the biggest worry for the head of that operation isn’t about constant supply shortages or more funding.

It’s about protecting his staff.

Dr. Jafar Razeq said in a recent interview that three people who work at the lab have tested positive for COVID-19 since the start of the pandemic. He said he is confident they weren’t infected because of their work at the laboratory and all three have now recovered and are back on the job.

But if he could be granted one wish in the midst of this crisis, Razeq says, it would be “to continue to have my staff be able to come to work and not lose any of them.”

The lab is equipped with three different “bio-safety levels” within the facility, with special air circulation and filtering systems that can change the air in the most secure rooms 20 times an hour. Everyone who could be exposed to COVID-19 in the labs are also provided full personal protection equipment, Razeq said.

As an added precaution against the virus somehow spreading within the staff, Razeq has divided his testing personnel into two independent teams “to minimize physical contact with other staff members.”

Ramping up testing and supply challenges

Razeq, 58, heads up a team of more than 80 people at the cutting-edge laboratory facility. The 105,000 square foot lab was built in 2014-15, and Razeq took over as its director soon after it opened.

At the start of the pandemic, the state public health lab in Rocky Hill was the only facility in Connecticut authorized to test for the coronavirus and was capable of processing only 15 to 20 tests for the disease each day.

Since then, the state lab has dramatically increased the number of tests it can handle in a day. Multiple commercial, university and medical laboratories around Connecticut have also since been certified for COVID-19 testing.

Now, the state lab can analyze 80-160 tests per day, Razeq said. The biggest factor limiting testing and the reason why the number of tests processed each day varies so widely is the ongoing shortage of key materials.

“We’re facing serious shortages in some components of testing,” Razeq said. “On the days we have the reagents and supplies [necessary for swift processing of tests], we can do more in less time.”

Razeq said that without the right materials those tests must be processed manually, which slows everything down.

Getting those critical supplies has been a constant challenge since the pandemic began, according to Razeq. He said the lab can only obtain a few days’ worth of those key materials at a time.

“So far, we’ve been lucky,” Razeq said, adding that the deliveries of reagents and other supplies are never enough to end his worries about running out.

“I can’t say today that I have supplies… to last even a week,” Razeq said in an interview last Friday.

He said that processing 160 coronavirus tests per day “is probably our upper limit” unless the state decides to invest in additional equipment for the lab.

A change of focus

When the coronavirus first hit in Connecticut, the state lab’s COVID-19 testing capabilities were directed toward hospitals to try to keep front-line medical staff from spreading the disease to patients and to analyze tests.

But Razeq said the state lab’s focus has now shifted as commercial labs, hospitals and other medical facilities have begun processing tests for the virus.

Over the past few weeks, the state lab has been increasingly dedicated to processing tests for patients and staff at Connecticut nursing homes and long-term care facilities that have become the pandemic hot spots in the state.

Razeq said the lab is expected to shift direction again when Connecticut moves toward wide-scale testing for coronavirus antibodies to determine who has recovered from the virus and who may still be vulnerable.

“That’s going to be the next focus in dealing with this pandemic,” he said.

The COVID-19 pandemic isn’t the first time Razeq has had to deal with a major public health crisis.

In 2001, he was working as chief microbiologist for the Maryland Laboratories Administration when letters containing deadly anthrax spores began arriving at congressional offices and media outlets. Five people died as a result of those anonymous letters and 17 others were sickened by anthrax exposure.

But Razeq said the coronavirus pandemic is far worse. “This experience is a totally different story,” he said. The exposures and the impact of those anthrax attacks, while horrifying, were far more limited than a viral infection that can be easily spread with a cough or a sneeze, Razeq said.

Razeq is a Palestinian by birth and trained at the State University of New York’s School of Medicine. In addition to his medical doctorate, he also earned a PhD in microbiology.

A married father of four children, Razeq has worked at hospitals in Brooklyn, NY, and Qatar and the New York City public health lab, in addition to his time in Maryland.

These days, Razeq is normally up by 6:30 or 7 a.m. and then heads to the lab for 12 hours or more before going home to answer emails and return phone calls. He said his days often don’t end until 10 p.m. or later and, like the rest of his staff, he’s been working seven days a week since the pandemic began.

The pressure on everyone at the Rocky Hill lab right now is enormous, and Razeq said it’s only intensified by the constant stream of news and commentary about the pandemic on social media.

“It’s following you everywhere you go,” he said, “and that adds to the anxiety level.”

Despite all the precautions and preventative measures taken, Razeq knows there are no guarantees of complete safety for anyone on his staff in taking on a disease like COVID-19.

“There’s never going to be zero risk,” Razeq said. “But we’re trained to work under these high-risk conditions.”