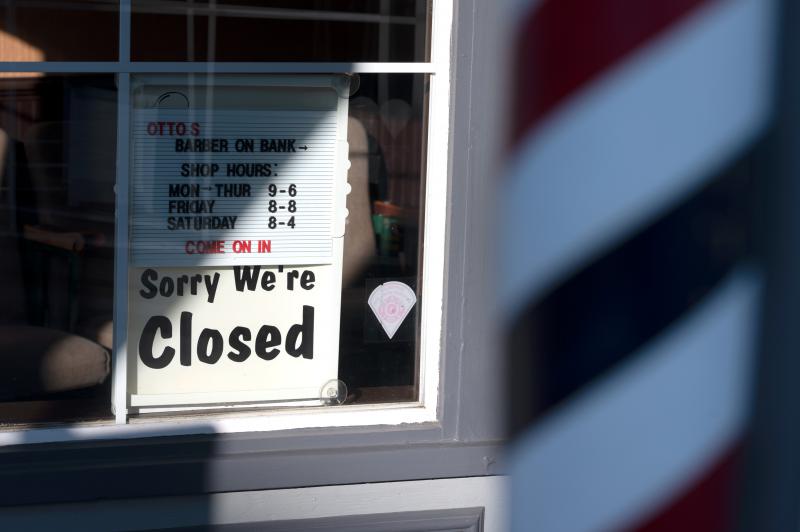 A closed sign on a barbershop in New London on April 15. As COVID-19 started to spread in Connecticut in March, the state shut down non essential businesses like hair salons and barber shops.

Gov. Ned Lamont said Thursday that his preliminary plan for easing COVID-19 restrictions would permit businesses to reopen to varying degrees on May 20, assuming the increased availability of testing and a continued reduction in hospitalizations and illnesses due to the novel coronavirus.

The governor said that hospitalizations fell for an eighth consecutive day, a key metric. But his advisers warned that social distancing and other protective measures would continue indefinitely to guard against a resurgence of a disease blamed for 2,257 deaths in Connecticut.

There were 933 new cases and 89 deaths recorded Thursday, reminders that the state must stay on guard until the availability of a vaccine or more effective therapeutic options for a severe respiratory disease caused by a virus unknown a year ago. 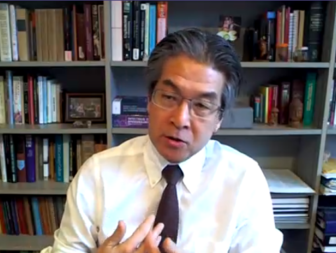 The advisory group led by Ko and Indra Nooyi, the former PepsiCo chief executive, recommended a four-level risk scale with detailed guidance on size of gatherings in social settings and protocols for employee protection at businesses.

“There are very clear directions on social distancing: How many people can get together in a group. How far apart tables should be in a restaurant. The protocols give you incredible detail,” Nooyi said.

The approach draws on the experience of other nations already past the peak of a pandemic that has devastated the worldwide economy, disrupted international supply chains and forced the closure of schools and most aspects of public life. In Connecticut, about 430,000 people have lost jobs in the past six weeks, and a grim revenue report issued Thursday predicts a fiscal calamity for the state over at least the next two budget cycles,.

Lamont’s closure orders are responsible for about half the job losses, while another 29% was attributed to businesses the could legally remain open but did not for either health fears or lack of demand, according to analysis by his advisory group.

About 30% percent of the recently unemployed in Connecticut theoretically would be able to return to work on May 20, but easing restrictions will not equate to instant economic activity. The unknown is how quickly consumer demand will rebound, and Nooyi declined to make a prediction.

“It’s too early to talk about how many will go back,” Nooyi said. “Three or four weeks after reopening, we should have some idea.”

The most immediate changes in life may be small: Connecticut residents can expect to see barber shops and nail salons open on May 20, but restaurants will be limited to takeout and outdoor table service. Bars will remain closed. Nearly everything else will come back in degrees, assessed every 30 days. 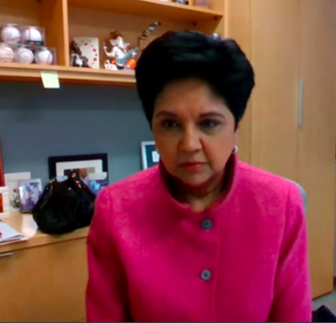 Indra Nooyi is the former PepsiCo chief executive and chairman.

“This is baby steps,” Nooyi said.

The new risk assessment levels will be color-coded, reminiscent of the terrorist threat-level chart devised by the administration of George W. Bush after 9-11. Red means the highest level of risk and restrictions, a stop light for civic and commercial life. (New Zealand called that level “lockdown.”) Green signifies the lowest risk — and a go signal for the economy.

At each level, the state will offer guidance on precautions regarding the wearing of cloth masks and the advisable size of public gatherings. Businesses will get a scale for assessing risk on such factors such as “contact intensity,” meaning how many workers or customers will be present, how close will they be and for long will they interact.

Even as the restrictions are lifted, Lamont said, he would urge employers to continue to let people work from home.

The outline received mixed reviews from lawmakers and an expression of disappointment from a restaurant trade group, which is represented on the advisory panel,

“The plans announced today would be a step toward reopening, but we fear it would not be nearly a big enough step to save thousands of restaurants on the brink of going out of business,” said Scott Dolch. “We’re asking the group to be flexible as they refine these plans, and we stand ready to help them do it.”

Dolch said restaurant owners know that some restrictions must remain, but the industry has offered ideas, such as limits on capacity.

House Minority Leader Themis Klarides, R-Derby, one of the legislators who had been fearful that no plan would be forthcoming until May 20, said, “I’m thrilled they expedited that process.”

But the administration’s outline raises as many questions as it provided answers, she said. Businesses are hungry for granular details on what they need to do to be ready on May 20. Klarides said there is nothing wrong with “baby steps,” but only if they come with a greater degree of clarity.

“A power point presentation that lacks detail or common sense applications that work for small and even large companies and employers does not cut it,’’ Klarides said. “These are all conditional policies based on unknown data that no one knows how to implement or how it will affect them.’’

House Majority Leader Matt Ritter, D-Hartford, said he received two sets of complaints from his members: Some who feared the governor was moving too quickly; others convinced he was moving too slowly.

Lamont is deferring until at least next week an announcement on whether schools will reopen or remain closed. Ritter said he needs to provide parents with an answer not only about school, but the availability of summer camps and other youth programs.

“The basic question is, ‘What do I do with my child?’ ” Ritter said.

The public emergency declared by Lamont in March gives him sweeping powers to set aside state laws and regulations, but that power expires on Sept. 9, the end date he set in the executive order establishing the emergency.

The plan to ease the restrictions is predicated on what the COVID-19 caseload will look like in May, as well as the state’s ability to monitor the disease.

The simplest metric for easing restrictions is a 14-day reduction in hospitalizations, but there is a second more difficult requirement: By May 20, the state is aiming to triple the availability of testing and flesh out a new system of tracing the contacts of the newly infected to guard against a resurgence.

Without readily available testing, the economic rebound will be slow, Lamont said.

“Testing gives the consumer confidence we are doing everything to keep them safe,” he said.

Ko said the advisory group is recommending a capacity to do 42,000 COVID-19 tests a week, providing a level of scrutiny necessary to detect a resurgence of the disease.

“That’s about three times what we’re doing now,” Ko said. He called the 42,000-tests per week “a minimum bar” for making reopening decisions, and the advisory panel would like to see that number continue to increase after May 20. “We’re not stopping at that benchmark.”

But Lamont said that 42,000-tests per week goal “is not an absolute” and that other factors could play into his decisions about whether to slow down the proposed reopening plan. He said that if New York City or Boston were to see a sudden resurgence of the virus, “We’re going to have to recalibrate.”

Trumka has asked Lamont to change the workers compensation law so that every public-facing employee who contracts COVID-19 is presumed to have a work-related illness, guaranteeing medical care and wage replacement while they are out sick.

“It really is a common sense solution,” Trumka said.

Keri Hoehne, who represents unionized grocery store workers, said she admired the health care workers on the front lines of fighting the pandemic, but she noted that retail cashiers weren’t prepared to face a life-threatening illness with every customer they serve.