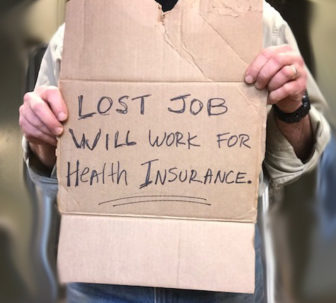 As the number of unemployed in Connecticut explodes in the coronavirus pandemic, the number losing their employer-based health care coverage is also rising sharply.

About 60 percent of state residents are covered by an employer-based plan in Connecticut, a state that has prided itself on a low rate of uninsured.  But the pandemic has cost the state some 400,000 jobs — and the nation 30 million — and more job losses are expected.

That’s likely to result in a wave of newly uninsured people in Connecticut — one that could dwarf the spike in uninsured that occurred in the Great Recession. In the first year of that recession, 2008, the number of uninsured in the state increased by 22,000.

Although the state does not yet have any hard data on how many have lost coverage because of the pandemic, Health Management Associates, a consulting group, estimates 130,000 to 382,000 Connecticut workers could do so, depending on the full impact of the pandemic on the state in the coming weeks and months. HMA also projected that as many as 77,000 state residents could become uninsured.

The HMA’s projections on the loss of insurance coverage in Connecticut under three different unemployment levels.

Many who’ve lost their jobs can extend their employer-based health coverage due to a federal law called the Consolidated Omnibus Budget Reconciliation Act, or COBRA, which  gives jobless workers and their families the right to choose to continue their group health plan, normally for a period of 18 months.

But those who choose to use COBRA to extend their health benefits are likely to have to pay up to 102% of the cost to their plan, which could exceed more than $1,000 a month for family coverage. Congress is considering new subsidies to help workers opting for COBRA benefits. But approval of those subsidies is not assured, and the money appropriated may not be enough.

Vicki Veltri, executive director of the state’s Office of Health Strategy, said there may be better options for those who have lost their health care coverage.

“There is no downside in going to the AccessHealth option,” Veltri said.

After the coronavirus began to make its deadly way across the United States, Access Health CT established a special enrollment period – from March 19 to April 17. About 3,420 Connecticut residents who were uninsured at that point seized the opportunity to purchase a policy from Anthem or ConnectiCare through the marketplace.

Another 2,209 residents who had a health plan, but lost it — perhaps because they lost their jobs —  also purchased coverage during the special enrollment period.

Access Health said another 1,060 people have enrolled in an individual plan on the exchange since then.  Although the enrollment period has ended, the newly jobless can still purchase coverage through AccessHealth CT because the loss of a job is considered one of several “qualifying events” that allows a person to purchase a policy through the exchange at any time of the year.

Access Health also determines if an applicant is eligible for Medicaid, or HUSKY as it’s known in Connecticut.

David Dearborn, spokesman for the Connecticut Department of Social Services, said he expects an increase in HUSKY enrollment, just as enrollment in the state’s food stamp program “will be up significantly.”

“The extent of the Medicaid/HUSKY increase for April is undetermined at this point, but indications from application intake and enrollment activity at Access Health CT so far point to increased enrollment,” Dearborn said.

Access Health said 63,076 state residents have applied for HUSKY coverage from Jan. 1 through April 30. That’s a  44% increase in applications over the same period in 2019.

Congress has allocated about $440 million in new funding for Connecticut’s Medicaid program, in anticipation of increased enrollment.

Congress has also approved new laws that mandate free testing and treatment for COVID-19. On Wednesday, the Trump administration unveiled the specifics of a plan to support the health care system during the pandemic and with the aim of making sure uninsured patients will be covered by giving hospitals and doctors direct payments from the government.

Health and Human Services Secretary Alex Azar said $20 billion will be doled out to health care facilities across the country and another $10 billion will be focused on rural health clinics and hospitals. Hot spots that have carried the brunt of the cases will get $10 billion in relief. New York, for example, the hardest-hit state in the country, will be allocated $4.4 billion.

But this money would only be available to health care providers for COVID-19 related treatment. And many hospitals say it’s not likely to cover all the costs of treating the newly uninsured.