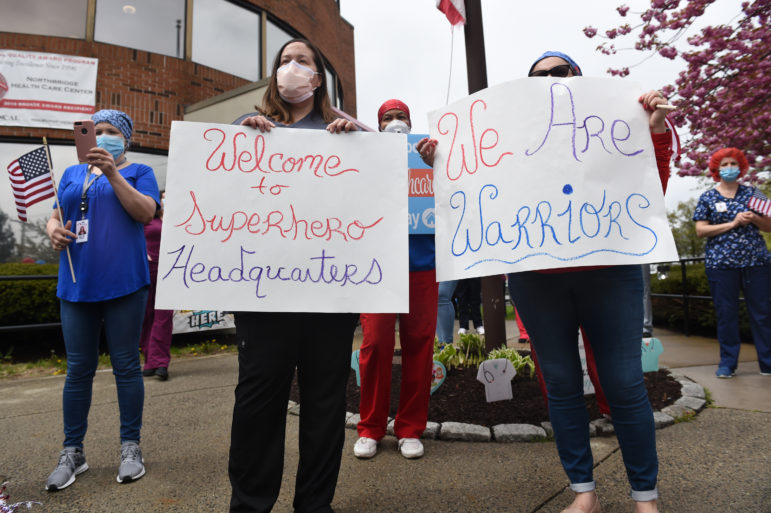 Bridgeport — They are only two words. Mayor Joseph P. Ganim acknowledged that. But he said they can’t be uttered enough, not to health care workers during a pandemic, especially those caring exclusively for COVID-19 patients.

So the governor, lieutenant governor, two U.S. senators, state lawmakers, the mayor and a city council leader came Friday to stand outside Northbridge Health Care Center, one of the skilled nursing homes converted to care for patients infected with the novel coronavirus, to say it: Thank you.

“You answered the call. This is your moment. You’re going to be able to talk about what you did during this period of time for your community, for your state, for your country, for the rest of your life,” Sen. Chris Murphy said. “This is a group of individuals that people are going to talk about for decades and decades to come. I hope you understand that.”

Twenty-seven staffers at Northbridge have tested positive for COVID-19, the respiratory illness blamed for 2,339 deaths in Connecticut, including 89 reported on Friday. More than half the deaths recorded in Connecticut since the outbreak six weeks ago have been of residents in nursing homes. 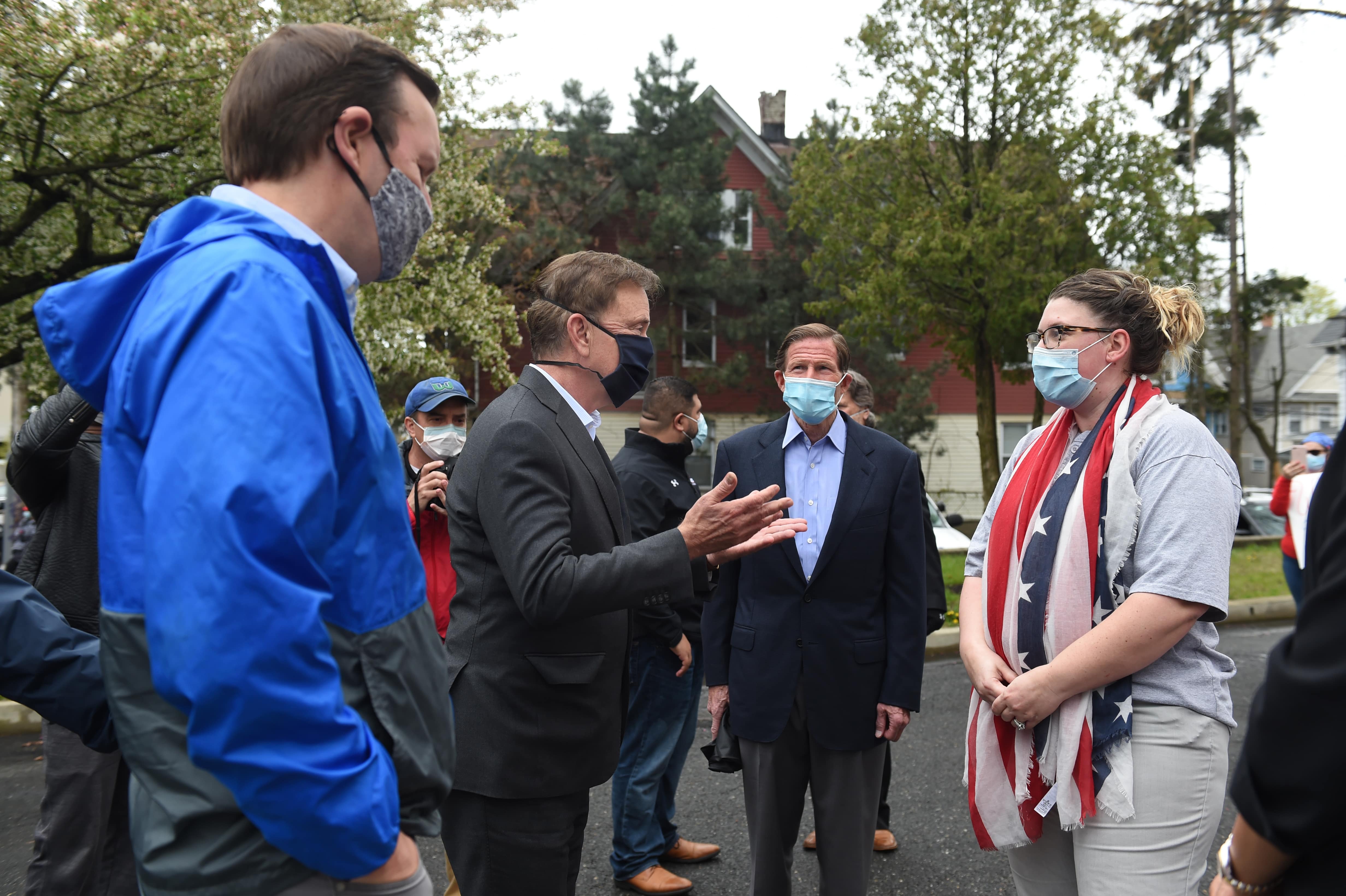 “We were hit hard,” said Liz Csanadi, who works in human resources, referring to the staff illnesses.“Now, it is going down.”

Fifteen have returned to work at Northbridge, where staff is caring for about 70 patients discharged from hospitals as they recover from COVID-19. The disease is unpredictable, landing a glancing blow on some and lingering in others.

“They are coming back slowly,” Csanadi said. “I mean, it can go anywhere from eight days to three weeks, depending on their systems. It’s just heartbreaking.”

As is the rule at all nursing homes, visitors are banned. Dr. Vashuda Vallabhaneni, the home’s medical director, said the isolation is difficult on staff and families. They try to provide virtual visits by video.

“They seem to understand, though,” Vallabhaneni said.

“It’s two words. And we use them so often it sounds like they lack sincerity, but they don’t, I can tell you that.”

The senators said they hope Congress eventually will set up a heroes fund for front-line workers.

“I think words are great,” Sen. Richard Blumenthal said. “I really believe in thanking you. You are in fact the warriors, the front-line heroes. Let me just say we need more than words. We need to reward you in dollars and cents and worker safety.”

The previous day, Lamont had outlined a cautious approach to easing the restrictions he imposed to slow the spread of the virus. On Friday, he teased a shaggy-haired lawmaker, Rep. Jack Hennessy, D-Bridgeport.

“Hey, Jack, the barbershops open on May 20,” Lamont said.

“Annie’s learning this stuff,” he said, a reference to his wife, a busy venture capitalist who has been tele-commuting from the Executive Residence in Hartford. Lamont was on his way to his home in Greenwich, where his adult children have been living and working.

The visit was brief, almost festive. Everyone wore surgical or cloth face masks. Some of the medical staff wore orange caps over their hair. Silver balloons, each a letter, bobbed in the wind. They spelled “heroes.”

Rep. Chris Rosario, D-Bridgeport, said five staffers have died of COVID-19 at the clinic where his wife works as an administrator. Three of the dead are nurses.

Lamont told the crowd everyone should understand the stress of working in a COVID facility, how some of the staff will undress in their garage, a precaution against bringing the virus home.

“You hear about all the protocols they have to go through just to go home to see their family,” Lamont said, a reminder of what is at stake. “It reminds me. I want to remind them how much we love them.”

“It’s two words. And we use them so often it sounds like they lack sincerity, but they don’t,” Ganim said. “I can tell you that.” 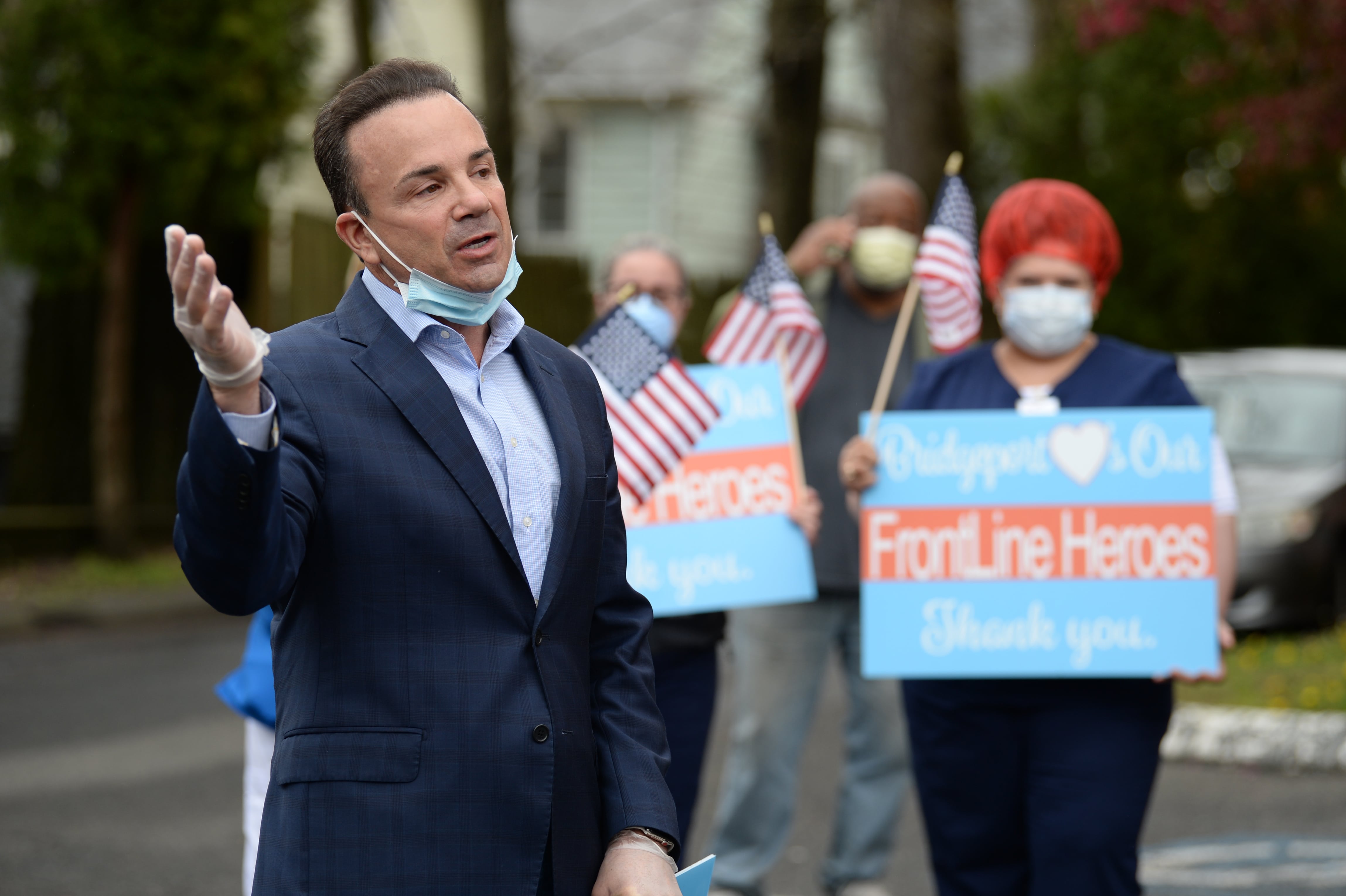