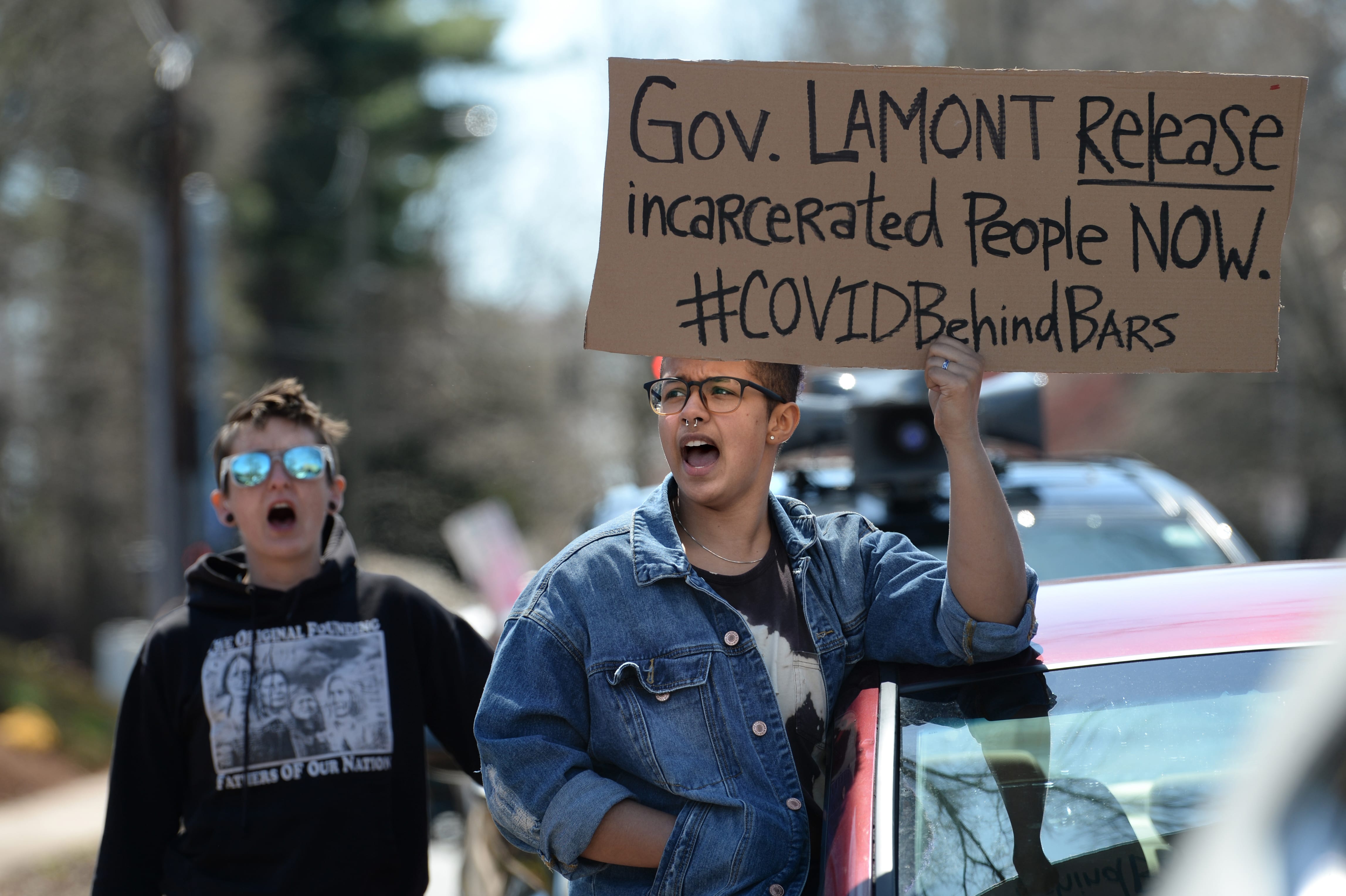 Kris Wraight (left) and Eliza Brown, (right) both of New London, chant, “Gov. Lamont! Free them all!” while participating in an in-car protest staged in front of the governor’s mansion Monday calling on Gov. Ned Lamont to release prisoners who are under threat from the COVID-19 outbreak. They were protesting on behalf of the Katal Center for Health, Equality and Justice, a justice reform group. About 30 cars formed a long line in front of the mansion blowing their horns and chanting during the 45-minute protest.

A federal judge denied the state’s motion to dismiss the ACLU of Connecticut’s class action lawsuit Wednesday, citing the “extraordinary circumstances presented by the COVID-19 pandemic.”

The ruling allows the case to proceed. The suit asks the court to order Gov. Ned Lamont and Department of Correction Commissioner Rollin Cook to safely release medically vulnerable incarcerated people, as well as those over age 50. And it requests a plan to protect any people who remain incarcerated, including a plan for release if social distancing behind bars remains impossible.

“Time is a luxury that incarcerated people do not have during this pandemic, as the [Department of Correction’s] response to COVID-19 has placed people in prisons and jails in grave, imminent danger,” said Elana Bildner, staff attorney for the ACLU of Connecticut and an attorney on the case. “We are grateful that the federal court has swiftly rejected the State of Connecticut’s procedural shell game and will allow people who are incarcerated to have their day in court.”

As of Wednesday, 478 inmates had contracted the virus.

In the state’s motion to dismiss, Assistant Attorney General Terrence M. O’Neill argued that the ACLU’s similar and since-dismissed state suit demonstrates that state courts are open and able to process certain cases. The motion argued the federal lawsuit should be tossed out because the incarcerated plaintiffs could seek release through the state courts.

“The very fact that the same attorneys were able to file such an action in state court completely refutes any claim that the state courts are ‘closed,’” O’Neill wrote. In an oral argument for the ACLU case conducted over Zoom Monday, O’Neill said court services have been consolidated, but they are open. And the incarcerated plaintiffs, he argued, could seek release through bail reduction, sentence modification, or writ of habeas corpus.

The ACLU said that state courts are hearing far fewer petitions for release than in pre-coronavirus times.

“Given the reality of the disease, which is spreading in Connecticut prisons, and the consequence of potentially catastrophic health outcomes, the Court concludes that exhaustion of state remedies would be futile, because, under current conditions, Plaintiffs are at substantial risk of contracting the disease prior to completing the exhaustion process,” Judge Arterton wrote.

“[G]iven the life- and-death consequences at stake, prudence warrants allowing Plaintiffs to continue pursuing this action in federal court, whether or not they have fully availed themselves of the remedies available in the state court system.”