The legislature adjourns: No pomp, lots of circumstance.

Legislators and staff recite the Pledge of Allegiance to open the brief, final day of the 2020 session. Lawmakers were told to stay home.

In a nearly empty State Capitol, a tiny band of legislators wearing surgical masks formally ended the 2020 session Wednesday, a concession to custom, calendar and the coronavirus.

“I’ve got to tell you, it’s very eerie to be in this building on the last day of session, and it’s empty,” said Senate Minority Leader Len Fasano, R-North Haven “This is historic in a number of ways. I don’t know if there has been a legislative session where no bills have been passed.”

The constitutional deadline was midnight, but legislators last met in session on Wednesday, March 11. They left planning to return the following Monday after a deep cleaning of the Capitol and Legislative Office Building.

But Connecticut confirmed its third case of COVID-19 on the 11th. The infection was the first assumed to have been contracted locally. The global pandemic had arrived, and the General Assembly’s 2020 legislative session effectively was over. 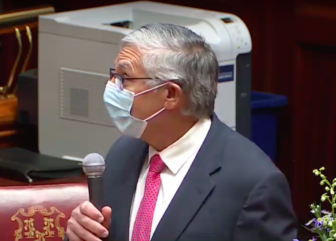 Seven weeks later, the novel coronavirus is no longer novel. Nearly 31,000 residents of Connecticut have tested positive for COVID-19, including one lawmaker, Rep. Jane Garibay, D-Windsor, who has recovered. More than 2,700 deaths have been attributed to the disease, a number certain to rise.

In both chambers, legislators observed a moment of silence for the COVID-19 dead. They did the same for two journalists who recently died, Josh Kovner and Jack Kramer.

The legislators did not need to meet. At the stroke of midnight, the session would have ended with or without formal motions to adjourn. But House Speaker Joe Aresimowicz, D-Berlin, said the leaders were unanimous in feeling the session not end in an empty Capitol.

“It was just the right thing to do,” said Senate Majority Leader Bob Duff, D-Norwalk.

They hope to return next month in special session to make revisions to the second year of a two-year budget suddenly in tatters, with revenues dropping, expenses rising and more than 400,000 unemployed. They also are expected to consider changes to absentee voting rules — and, most likely, their own rules.

House Majority Leader Matt Ritter, D-Hartford, told his colleagues that their institution, a representative body in a state known as the Land of Steady Habits, must change. He wasn’t ready to say how, but said they must devise procedures for how to do the public’s business when it’s not safe for the public to be present.

As he spoke, he repeatedly tugged at a mask that slipped off his nose.

“I am trying to talk through this thing,” Ritter said. “I hope I don’t get too good at it, because that means we’re doing this for a long time.”

Social distancing was no challenge Wednesday. Only two of the 36 seats in the Senate were occupied: Fasano’s and the one belonging to his opposite number, Duff. Presiding was a third lawmaker, Senate President Pro Tem Martin M. Looney, D-New Haven. 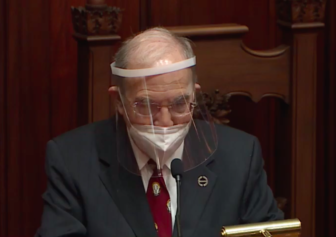 Senate President Pro Tem Martin M. Looney wore a mask and face shield. He is medically at risk to COVID-19.

Looney, 71, who has had to take drugs suppressing his immune system since a kidney transplant in December 2016, wore both a surgical mask and face shield.

On Fasano’s desk sat a floral arrangement, a traditional gift on the last night for a departing senator. Fasano, Aresimowicz and House Minority Leader Themis Klarides, R-Derby, are not seeking re-election, meaning three of the four caucuses will have new leaders.

Looney said that was another factor for wanting to convene. There were no long good-byes, none of the typical testimonials. But there were brief acknowledgements that the day was the last regular session day in the careers of three leaders.

The last night of the session normally is one of drama and deal-making, last-chance bids for passage of bills in the countdown to midnight. It typically comes at the end of a string of 18-hour days and sometimes an all-nighter or two. On Wednesday, neither chamber met for more than a half hour.

And everyone craves the coming adjournment and the promise of sleep.

“Not being able to do it this year has been a very jarring experience,” Klarides said.

Staff is working on protocols on how to meet and vote if large gatherings still are considered health hazards when the special session is convened, as presumed by the leaders. There are 187 lawmakers, 36 in the Senate and 151 in the House. The largest caucus, the House Democrats, has 90 members.

Possibilities include having lawmakers remain in their offices during debates, possibly participating by video, then arriving in groups of 10 to vote. But nothing is certain, including the date of their return. That will depend on the novel coronavirus and the extent to which it has loosened its grip on public life.

Looney said, “It would be very presumptuous to set a date.”