A COVID surprise: Reopening can be harder than closing.

Gov. Ned Lamont’s sweeping orders to slow the spread of a novel coronavirus constituted a momentous and unprecedented exercise of executive authority. He unilaterally closed businesses and dictated rules for social interactions, public gatherings and commerce.

Difficult as those steps were for a governor who thrives on consensus and collaboration, they now appear to be among the easiest things he’s done in the past two months.

Reopening the state is proving to be far more complicated than closing it. 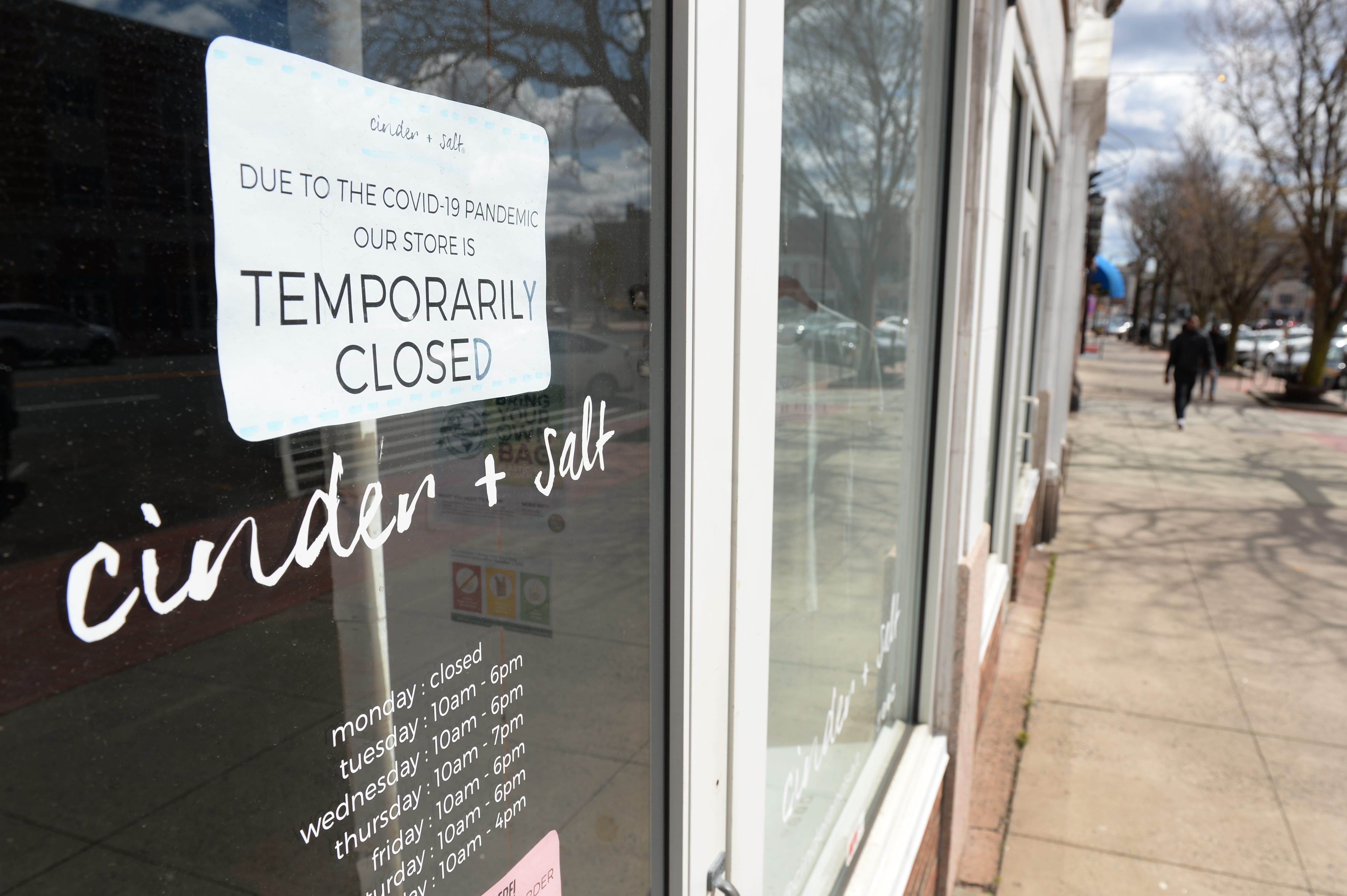 Temporarily Closed sign on the door of Cinder & Salt, a clothing boutique in Middletown due to the COVID-19 pandemic.

The governor is getting squeezed from both sides of a new divide in politics: Connecticut was surprisingly unified on the question of closing schools and stores in the interest of public health, but Lamont’s incremental easing of restrictions, beginning May 20, are criticized as both too much and too little.

“I appreciate the ongoing concern that people have, but I think we’ve got the right balance going forward,” Lamont said Thursday. “Right now, I think you have a sense we put public health and public safety first and foremost. And whatever we do, we’re doing very cautiously.”

Democratic state senators, including two who have appeared with Lamont at his daily briefings on the COVID-19 pandemic, released a letter Thursday challenging whether the state is ready for what Lamont calls “baby steps” to a new normalcy.

“Reopening is essential – but to do it while the first wave of the pandemic is still raging will not lead to a second wave, it will simply add fuel to the first wave, delaying our eventual recovery,” wrote the nine lawmakers. This was the second time Democratic senators have communicated their concerns about the administration’s plans; in an earlier letter, lawmakers asked the governor for more information about his criteria for reopening the state and offered 11 of their own suggestions, including more widespread testing than the administration has stipulated.

Differences of opinions in the group privately advising Lamont on the reopening were also evident Thursday during a one-hour roundtable discussion intended to provide insight into the rationale and research behind who can open next week and under what circumstances.

David Lehman, the commissioner of economic and community development, said the criteria for who can reopen includes the risk to public health, the ability to mitigate those risks and the impact on unemployment caused by that industry’s closure.

Risk is based on the potential for someone who may be asymptomatic to infect others. That means assessing the number of people in a commercial setting, their proximity to one another and the duration of their contact.

Movie theaters, concert halls and other event venues remain closed, because they put too many people in close contact for extended periods, Lehman said.

The easing of restrictions comes after three weeks of reductions in the number of patients hospitalized for COVID-19 and a slower drop in the percentage of positive tests for a disease unknown until late 2019.

There is no vaccine and only limited therapeutic treatments. Even with the easing of restrictions, face masks will be required anyplace where people cannot maintain a distance of six feet, and public gatherings will be limited to no more than five.

“This is going to be dynamic. This is a virus we are still learning about,” Lehman said. “As we learn more, we’re going to change our rules.”

Now closed to all but takeout, restaurants will be permitted next week to offer outdoor dining. It is a small gesture to what perhaps is the business sector hit hardest by Lamont’s closure orders. The state estimates that 12% of all unemployment claims are due to restaurant closings.

Dan Meiser, a chef and restaurateur who chairs the Connecticut Restaurant Association and serves on the governor’s advisory group, complained that few restaurants will bring back staff to offer outdoor dining. The weather is too variable this time of year, and most restaurants either lack sufficient outdoor space or are unwilling to invest in a temporary expansion.

“We don’t feel that’s a viable option,” he said.

The restaurants’ trade association has urged the governor to allow limited indoor dining by June 3. The industry proposes to reduce dining capacity at least by half and keep tables at least six feet from one another.

“No one is talking about going back to…the days of three deep at the bar and standing room,” he said.

Meiser was muted in his criticism, acknowledging that the advisory group was simultaneously assessing the risk posed by a new virus and devising what’s never been done: A plan to methodically and safely reopen an economy closed to slow a global pandemic.

“There’s not a playbook for this,” he said.

The state Department of Economic and Community Development is publishing a how-to guide either Friday or over the weekend. It will explain what can open next week and the conditions that must be met, which include limiting stores and offices to 50 percent access and requirements for face makes and continued social distancing.

Businesses must certify by May 20 they understand and will abide by the guidelines. The online process went live Thursday, and completion will earn businesses a “badge” they can display. Lehman called it a tool to instill public confidence.

“Confidence is so important here,” he said.

Joe Brennan, the president of the Connecticut Business and Industry Association, said Lehman has been pushing the administration to remove the limits on commerce as quickly as is safe, and he understands the frustrations over the restrictions.

“I know there are people angry out there about wearing masks,” Brennan said. But he added, “I cannot stress how important it is to follow all the guidelines.”

Following the guidelines now is the best way to avoid a resurgence in COVID-19 that would require future closings, he said. That could cause more lasting damage than the original closures, he said.