It’s a virtual convention. Victory means, ‘You are unmuted.’ 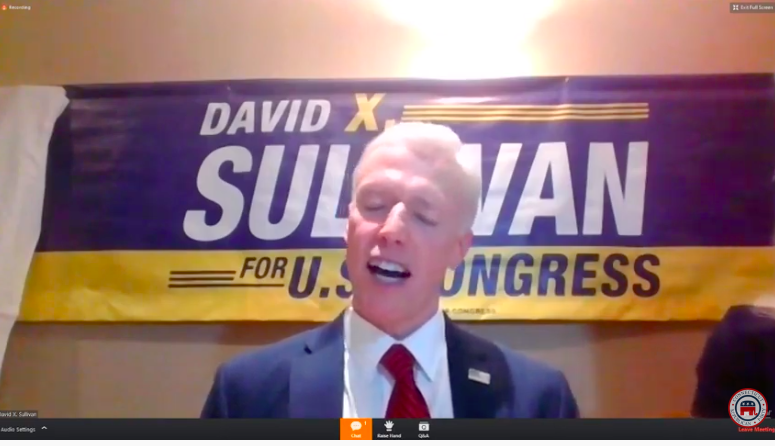 David X. Sullivan was left open-mouthed when the video froze during his acceptance speech at a virtual nominating convention.  He was invited to accept with these too-familiar words during the pandemic: “You are unmuted.”

Connecticut’s virtual congressional conventions, a necessity forced by a pandemic that has upended the mechanics of American politics, ended Thursday night with Republicans nominating David X. Sullivan in the 5th Congressional District.

He will face U.S. Rep. Jahana Hayes, a Democrat and former national teacher of the year who won the open seat last year with 56% percent of the vote, becoming the first black woman elected to Congress from Connecticut.

Sullivan, a former federal prosecutor, won by acclamation, sparing him one of the intra-party fights that are typical of GOP congressional nomination contests in Connecticut, a blue state that last elected a Republican to Congress in the mid-term election of 2006.

“Mr. Sullivan, the floor is yours,” said Eric Berthel, the state senator from Watertown who presided over the virtual convention attended by more than 200 delegates. “I believe you are unmuted.”

Sullivan delivered a speech geared to a convention hall, including lines meant to produce raucous applause. He faulted Hayes for supporting Medicare-for-all, comparing it to socialism as President Donald J. Trump did during his State of the Union speech.

“Ladies and gentlemen, that’s socialism, and we can’t stand for that,” Sullivan said. “I’ve told people this is a campaign against Jahana Hayes, but this is a war against socialism.”

All five congressional seats in Connecticut are held by Democratic incumbents seeking re-election. All five are considered safe Democratic seats by national prognosticators, and presidential election years generally are especially kind to Democratic members of Congress in Connecticut.

Hayes currently has an 18-1 advantage in available campaign cash. Sullivan has raised $158,000 and had slightly less than $55,000 cash on hand late last month. Hayes had $1 million in her campaign account. 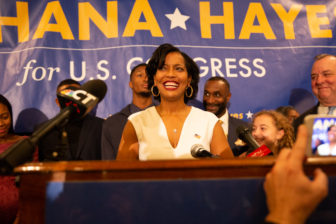 Hayes was nominated for a second term Monday night, virtually, of course, as were her fellow Democrats: John B. Larson of the 1st District, Joe Courtney of the 2nd, Rosa DeLauro of the 3rd and Jim Himes of the 4th. All won two years ago with at least 61% of the vote.

Republicans nominated Mary Fay in the 1st District last week, then Thomas M. Gilmer in the 2nd on Monday, Margaret Streicker in the 3rd on Tuesday, and Jonathan Riddle in the 4th on Wednesday.

J.R. Romano, the state GOP chairman, said he was unsure whether there would be primaries in any of the districts.

Typical of the other virtual conventions, there were glitches Thursday night. But Sullivan thanked Berthel and the others who ran the convention.

On cue, the video feed failed.

It returned, then failed again, leaving the nominee frozen and open-mouthed on the screen.

“Alright, I thought I lost everyone,” Sullivan said.

“We lost you for a moment, David,” Berthel said.

“I hope we can get David back, so he can finish his remarks,” Berthel said.

Sullivan thanked Nancy Johnson, the last Republican to hold the seat. She lost in 2006 to Chris Murphy, the Democrat who was elected to the U.S. Senate in 2012. Murphy played a role in recruiting Hayes to first run for office.

The newly crowned Republican nominee said he wants the 85-year-old Johnson to play a role on his behalf this year.

“I hope she’s on this call tonight. She so wanted to go to this convention but for the pandemic,” Sullivan said. “Nancy  plans on coming out and campaigning — if we’re able to do that in short order.”