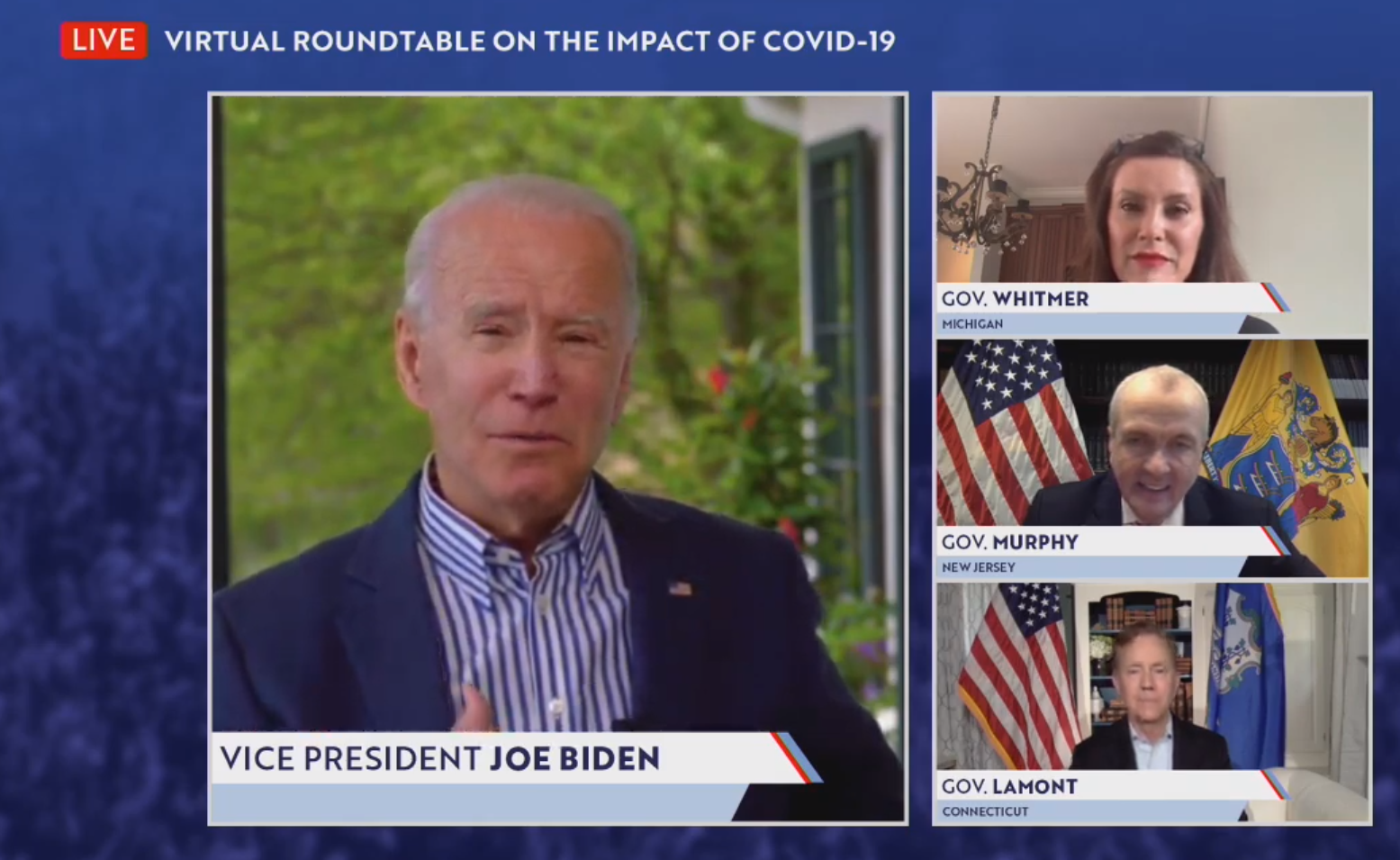 Former Vice President Joe Biden on Thursday invited Ned Lamont and two other Democratic governors to join him in a “virtual roundtable” he hoped would provide a counterpoint to President Donald Trump’s attitude toward the federal role in fighting the coronavirus.

Because of the virus, Biden has taken the fight to unseat Trump in November almost entirely online.  He has started a regular podcast to interview political figures almost every day. On Thursday, it was Lamont’s turn, alongside New Jersey Gov. Phil Murphy and Michigan Gov. Gretchen Whitmer, one of Trump’s targets of derision during the pandemic.

The quality of Biden’s videos, both audio and video, has often been shaky and on Thursday it was no different.  There was also the distracting honking of geese somewhere behind the former vice president, since Biden had abandoned his normal basement studio in his Delaware home in favor of a site in his yard on the pleasant spring day.

“They’re in the pond out back.  They’re Canadian geese who want to escape the virus,” Biden joked.

The presumptive Democratic presidential candidate said “this is not a moment for excuses or deflections or  blame games.”

He let his gubernatorial guests take care of that.

“It took the White House a long time to take this seriously and we were on our own for a long time,” Lamont said.

Lamont also said he “resented the idea of ‘a bailout,’” – what Trump and congressional Republicans derisively call plans for more federal help to state and local governments. Democrats, meanwhile have included $875 billion in a massive House stimulus bill called the HEROES Act.

“It was the federal government who said we needed to slow down the economy, and we slowed it down,” Lamont said.

Biden and the Democratic governors also discussed how minimum wage workers have metamorphosed into heroic “essential workers” during the pandemic.

While Biden held his virtual roundtable,  Trump gave a speech at a medical supply distribution center in Pennsylvania that is providing equipment for the coronavirus pandemic.

In his address, Trump referred to “Sleepy Joe,” his derisive nickname for his opponent,  as he laid out a plan for future pandemics and laid blame for the current one on former President Barack Obama.

The Trump campaign also attacked Biden’s town hall by emailing a “fact check” before the start of the roundtable that said both Lamont and Murphy “have explained in no uncertain terms that the Trump Administration is helping their states boost testing capacity and providing supplies and science-based guidelines to help safely reopen.”

The campaign’s “fact check” included a couple of Lamont quotes to back up this point, including one from April 25.

“We’re getting guidance from the White House COVID task force,” Lamont said on that day. “They’ve been pretty clear about when you should open… Their guidance has been helpful, but then they leave it up to the governors, which I think is appropriate.”

Lamon told Biden on Thursday that he hoped to be ready – and in little need of federal help — if the coronavirus returns with a vengeance in the fall or winter. “I want to make sure next time around that we can control our own destiny,” Lamont said.

Biden said he hoped the nation was prepared, too. He said his doctor had called him a “congenital optimist” when he suffered an aneurysm some years ago.

In parting, Lamont told Biden  “see you soon in Connecticut.” One of the first Democrats in political office to endorse Biden, Lamont has also held a fundraiser for the White House hopeful.

“God willing, you’ll see more of me than you want to,” Biden shot back.