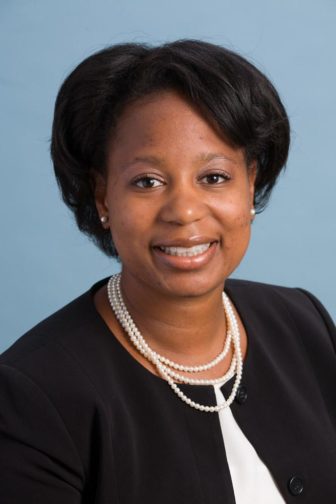 Tiffany Donelson, vice president of program for the Connecticut Health foundation, has been named the group’s next president and CEO.

The Connecticut Health Foundation has tapped its vice president of program, Tiffany Donelson, to take over as president and CEO beginning Sept. 1.

Donelson will replace Patricia Baker, a founding member of the organization and the group’s leader since its 1999 inception. Baker had planned to retire in late June, but said she will stay on through September because of the COVID-19 crisis and “challenges of a transition during this time.”

The health foundation had launched a national search for a successor.

“The COVID-19 pandemic laid bare the entrenched health disparities communities of color face in Connecticut, which increases the importance of the Connecticut Health Foundation’s work,” Baker said Monday. “I leave the foundation confident in Tiffany’s dedication to improving health outcomes for people of color and to ensuring that the next generation of Connecticut residents has the opportunity to be as healthy as possible.”

Donelson joined the foundation in 2014 after serving in several roles at Aetna, including as deputy chief of staff for the national business office and as a director in corporate strategy. She also worked as a consultant at Ingenix Consulting and PricewaterhouseCoopers. Donelson graduated from Georgetown University and received her Master of Public Health in health policy and management at Emory University.

Most recently, Donelson served as the health foundation’s vice president of program, overseeing grant making, policy and communications. She was unanimously selected by the group’s board of directors after a national search.

“I joined the foundation because health equity is something very personal for me. While Connecticut has made significant progress, there is still a long way to go to ensure that all of us receive equitable care and an equal opportunity,” Donelson said. “The current pandemic shows the importance of these issues and we will continue to respond to the needs created by the pandemic while focusing on deeper systemic issues and long-term change.”

The health foundation works to eliminate racial and ethnic health disparities through the awarding of grants, policy work and leadership development. The foundation has awarded more than $67 million in grants and has tackled issues such as oral health, children’s mental health, expanding access to health care and coverage, and advocacy. The CT Mirror is among its grant recipients.