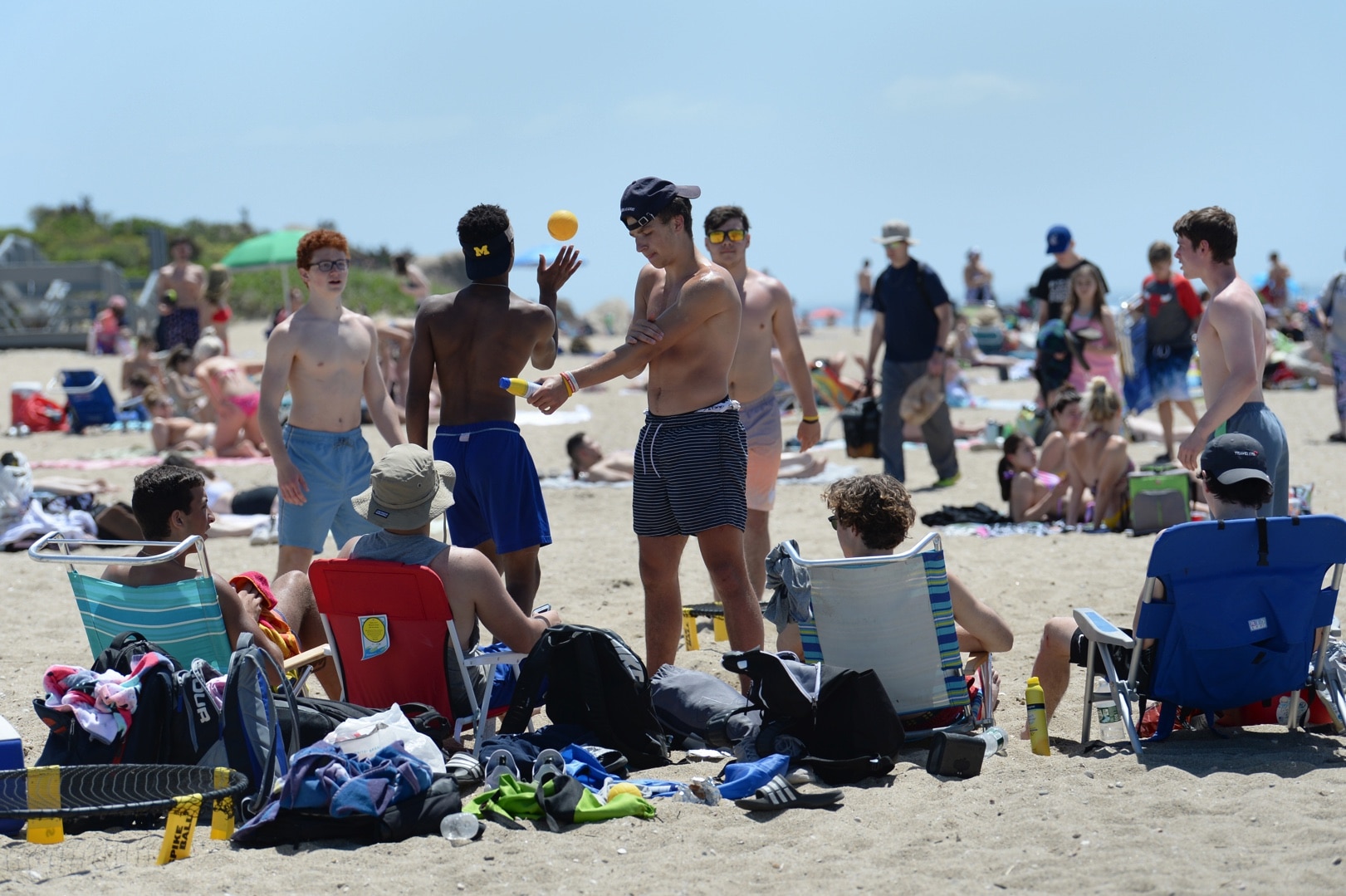 A group of friends hang out at Hammonasset Beach State Park Friday to kick off the Memorial Day weekend. At 7:30 a.m. there were 200 cars lined up waiting for the park to open and it was closed when they reached capacity at 12:15 p.m. according to a park ranger. Visitors were encouraged to leave fifteen feet between the next group of people in response to the COVID-19 pandemic.

“We are not the Ozarks,” Lamont said during his regular COVID-19 briefing Tuesday, referring to widely distributed videos and photos of people ignoring social distancing at the Lake of the Ozarks resort in Missouri. “Connecticut was Connecticut smart this past weekend.”

While the state did restrict the number of people entering several state parks over the weekend to avoid overcrowding, Lamont said he believed “people were pretty appropriate” in being careful to observe social distancing on state beaches.

But Lamont said he is continuing to urge Connecticut’s two tribal casinos not to proceed with their plans to open on June 1.

“I think June 1 is too early,” the governor said, particularly for elderly people and those most at risk for the coronavirus. He said he’s trying to convince tribal leaders to hold off opening at least until mid-June.

Rhode Island Gov. Gina Raimondo has warned that, if the Connecticut casinos go ahead with their planned Monday opening, still-closed casinos in her state and Massachusetts are bound to follow suit fairly quickly, Lamont said.

“She would like to see the openings put off at least ’til mid-June, and she said if you can get your casinos in Connecticut to put off to mid-June, Rhode Island and Massachusetts could do the same,” Lamont said. But if they “jump ahead of everybody — even earlier than the Las Vegas casinos are opening — then her strong feeling is the other casinos would be sure to follow.”

According to the American Gaming Association, only 181 of the 989 tribal and commercial casinos have reopened. None are in the northeast.

Mohegan tribal officials took the governor’s commissioners of consumer protection, public health and economic and community development on a tour of COVID-19 precautions in place for the reopening of the Sun. A similar tour is planned for Foxwoods.

“We were very glad to welcome members of Gov. Lamont’s cabinet today,” said James Gessner, the Mohegan chairman. “They were able to see firsthand the many ways Mohegan Sun will go above and beyond protecting visitors and employees once we reopen. We’ll continue to work with them in the coming days and hear their ideas. We’re confident that when we open, the technology, protocols, and safety measures in place will far exceed what’s available or expected in other commercial settings. As always, we remain open and cooperative partners with the State of Connecticut.”

Lamont said that, if Connecticut’s casinos do open on June 1, he wants them to restrict service of alcohol to patrons and to discourage older people from gathering indoors at the casinos. He suggested state officials might consider revoking the casinos’ state liquor permits, but said: “I don’t think it will come to that.”

Rodney Butler, the the chairman of the Mashantucket Pequots, who own Foxwoods Resort Casino, could not be reached for comment.

The number of people hospitalized for the coronavirus resumed its downward trend Tuesday. Officials reported that, after a slight spike in hospitalized cases at the start of this week, hospitals saw a net decrease of 12 COVID-19 patients, down to 694 people across the state.

Connecticut fatalities resulting from the virus continued to climb as another 27 deaths were added to the grim list. The total number of COVID-19-related deaths reported by the state now stands at 3,769.

Testing for the disease around Connecticut also rose, according to state statistics released Tuesday, with an additional 3,636 people getting checked for coronavirus. Of those, 430 people tested positive.

Lamont said that, overall in this state, “the trend is going in a very positive direction.”

One of the big questions surrounding Connecticut’s pandemic Memorial Day weekend is whether all the beach-going and backyard barbeques will result in a spike in new COVID-19 cases in this state.

But the answer isn’t likely to be known for a week to two from now. That’s about how long it takes for most people to show coronavirus symptoms after being infected, according to Dr. Keith Grant, director of Hartford Healthcare’s infection prevention program.

“If something happens this weekend, for example, based on the incubation period, we’d say that within the next week or two weeks, we’d see some fallout from that,” Grant said Tuesday at the hospital system’s regular briefing

Net hospitalizations for COVID-19 in Connecticut did rise by five patients on Monday, the first such increase in several days, but dropped again by Tuesday.

Grant said that slight increase couldn’t have been anything to do with whether or not people were social distancing or wearing masks in public over the holiday weekend, and he said such small increases were expected by disease experts.

“We’ve seen some spike in hospitalizations… across the state,” Grant said. “This is normal.” He said the increased number of people being treated for COVID-19 is likely the result of increased testing and that people seeking hospital care for other problems turn out to have the virus as well.

“Epidemiologically, it’s a higher probability that this will be the cadence. We will have some increases, some minor spikes throughout the summer,” Grant said. He added that it’s far too early to predict whether the surge in coronavirus cases that some experts fear will occur this fall will actually happen.

Grant said he believes that people in Connecticut “generally are very responsible at this point.” Despite some reports of large family crowds in some places, Grant said that “Most of the gatherings I’ve seen seem to very organized, seem to be very respectful of social distancing.”

Grant said the Memorial Day weekend is the first real chance to gauge whether Connecticut’s reopening efforts will result in any surge in cases.

“A lot of people got together, a lot of families used the opportunity to get together,” Grant said. He said that, if those gatherings actually produced increased infections, “In the next week or two weeks you’d be seeing that fallout from that.”

“For the most part, people are being very, very respectful,” Cantor said of the folks she saw out and about over the weekend in her community. She said most business and restaurant owners are eager to get open and their customers back, but Cantor added, “We’ll continue to take our baby steps.”

On Friday, Lamont joined Cantor for dinner on the patio outside the Delamar Hotel in West Hartford.

Camillo echoed Cantor’s concern about possibly going too fast on reopening the economy and triggering a renewed surge of the virus. “We don’t want to take any steps backward,” Camillo said. He also said he’s been seeing a lot of New York license plates on cars coming into Greenwich, calling the possibility of an influx of New Yorkers “a definite concern” since New York has been the epicenter of the pandemic in the U.S.

Lamont said most people in this state appear to be following guidelines for wearing masks in public and social distancing, and that gentle reminders seem to be fairly effective for people who may be “more casual” about such coronavirus recommendations. “It’s a soft enforcement, and so far it seems to be working,” the governor said.

Cantor and Camillo agreed that all that is usually needed is a word from a policeman or local official to get store owners or customers to comply with the coronavirus guidelines.

A little good news on the coronavirus in Connecticut

A new study of pregnant women being admitted to give birth at hospitals in southern Connecticut found that less than four percent tested positive for COVID-19, a rate far lower than in New York City.

Researchers at Yale New Haven Health reported that the infection rate for asymptomatic pregnant women about to give birth was even lower – less than three percent.

The report released Tuesday was based on tests of 770 pregnant women admitted to hospitals in Greenwich, Bridgeport and New Haven during April. Of that total, just 30 were diagnosed with coronavirus, and 22 of those women were showing no signs of the disease.

The results indicate that the infection rate for pregnant women in Connecticut is far lower than in New York City, where a separate study found 13.5 percent of women being admitted to hospitals for deliveries had the virus. New York City has been at the epicenter of the pandemic in the U.S.

The study’s results were published in the May 24 edition of JAMA, the Journal of the American Medical Association.

Yale New Haven officials said the findings are an indication that, when comprehensive COVID-19 testing is employed by hospitals, staff in childbirth sections of hospitals will need far less precious personal protective equipment than was previously thought.

A week after staff vaccination deadline, about half of CT nursing homes had rates under 96%