A mayor and U.S. senator sit for a public COVID-19 test 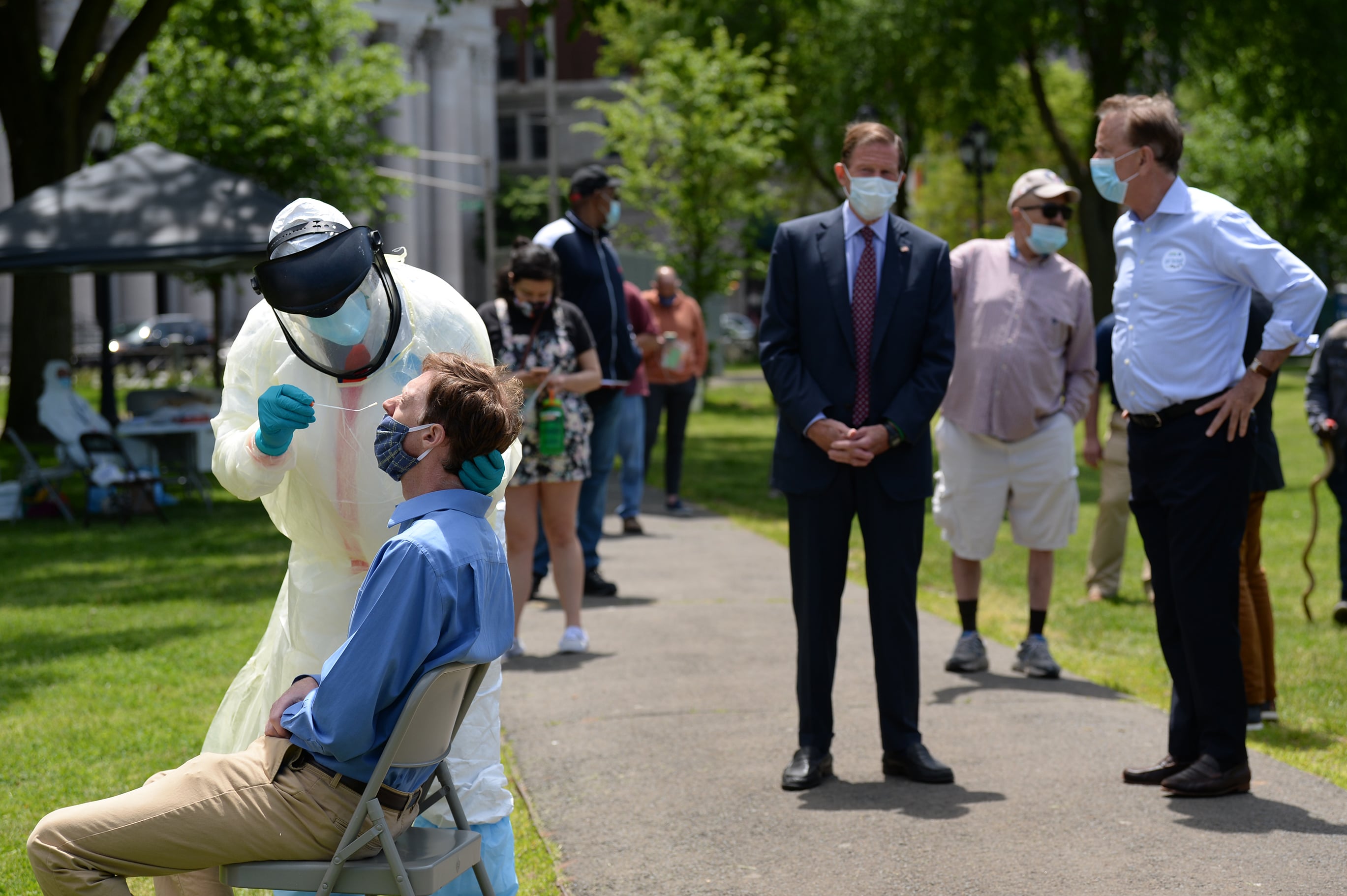 New Haven Mayor Justin Elicker gets tested with a nasal swab for COVID-19 by nurse John Grimes on the New Haven Green. At right, are Gov. Ned Lamont and U.S. Sen. Richard Blumenthal. The one-day walk-up testing  was conducted by Murphy Medical Associates based in Greenwich.

New Haven — U.S. Sen. Richard Blumenthal sat under a pop-up canopy on the New Haven Green, tilted his head back and submitted to a nasal swab for a COVID-19 test. The moment was a photo op for a media-savvy senator and a public-service pitch for a state promoting testing as it slowly loosens restrictions on commerce.

“It isn’t the most comfortable thing to have, in effect, a swab on a stick inserted directly into your nose. It is a a pretty strange and awkward feeling, but it doesn’t hurt,” Blumenthal said. He smiled and added, “And I didn’t cry.”

Testing for COVID has become easier to find in Connecticut, but testing sites still are less elements of a cohesive system than a loose affiliation of hospitals, community health clinics, laboratories and medical entrepreneurs behind pop-up sites, like the one open Wednesday on the New Haven Green.

“I think we have a long way to go,” said Mayor Justin Elicker of New Haven.

Gov. Ned Lamont, who previously tested negative for COVID, passed on the opportunity for a public test before news photographers, reporters and passersby.  Instead, he watched Blumenthal and Elicker get tested, the senator for the first time and the mayor for the second.

Currently we have enough capacity to test all the people that are symptomatic, but we need to change the messaging.” — New Haven Mayor Justin Elicker

“Testing is so key to us getting this virus under control, identifying future outbreaks in connection with contact tracing,” Elicker said.

New Haven has the highest per-capita rate of testing in Connecticut, a consequence of availability and outreach by the administration of Elicker, who was elected last year. He wore a sticker saying he was tested, something he hopes catches on as a way to reinforce the importance of avoiding new outbreaks.

Like nearly everything else about the novel coronavirus and the disease it causes, the message has shifted on testing. Initially, even the symptomatic were dissuaded from seeking tests unless they were gravely ill or a nursing home resident.

Now, Elicker said, testing needs to become commonplace, a way to monitor the virus. He envisions drive-up testing sites off highways, with perhaps weekly tests by even the asymptomatic.

“We need to teach everyone they need to get tested on a regular basis,” Elicker said.

It is a vision more ambitious than what the Lamont administration hopes to establish. The state’s position is that it will soon be practical to provide testing for asymptomatic people in high-risk populations, including densely settled cities. But not weekly testing for anyone willing.

Connecticut is generally testing about 42,000 people a week, the metric Lamont’s advisers recommended before the initial easing of restrictions on May 20, though the total for the past week dipped just below 40,000. Lamont said the number needs to double by June 20, the tentative date for indoor dining to resume at restaurants and outdoor events with 50.

“We’re going to hit that goal,” Lamont said. “We’ve been working with the labs in a very close way. They’ve given us the capacity.”

Elicker said public officials, himself included, were hyper focused on building a testing infrastructure that didn’t exist eight weeks ago. But they were slower to develop a communication network for outreach and education, necessary tools to help people find tests and know why they are necessary, which is one of the reasons why people aren’t showing up in great numbers to be tested in Connecticut’s cities.

“Currently we have enough capacity to test all the people that are symptomatic, but we need to change the messaging,” Elicker said.

Elicker said some of New Haven’s pop-up sites attract only 30 or 40, despite a daily capacity of 100.

The testing on the New Haven Green was coordinated with the city by Dr. Steven Murphy, a Greenwich internist whose medical practice became an early provider of COVID-19 testing and has continued with outdoor sites in Fairfield and New Haven counties in Connecticut and Westchester County in New York.

He owns the web site, CoronaTestCT.Com, which directs people to testing he does, usually in collaboration with a local government. 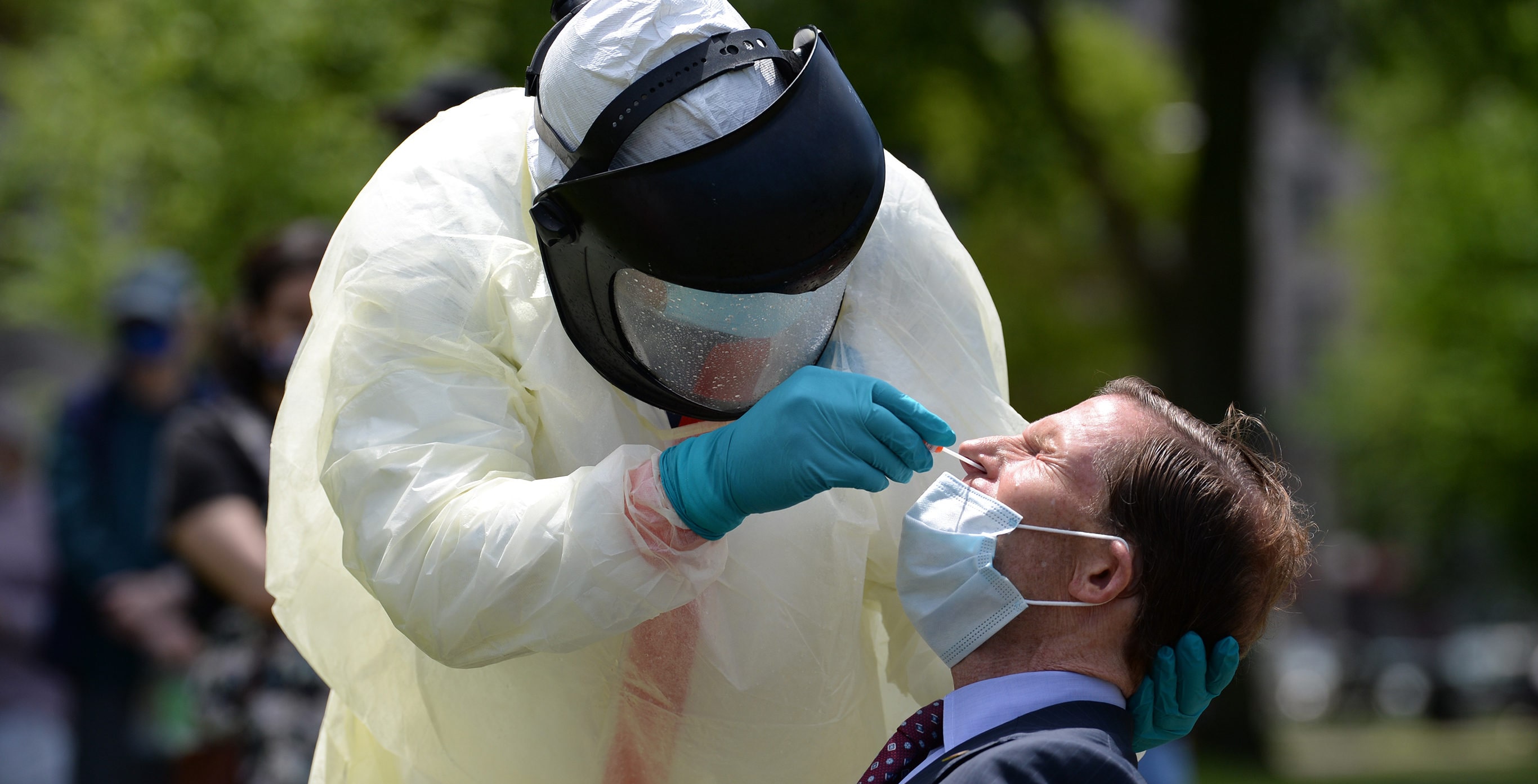 U.S. Senator Richard Blumenthal gets tested with a nasal swab for COVID-19 by nurse John Grimes on the New Haven Green Wednesday.

There is no charge to people who lack insurance, but it is not a charity.

The state’s major portal to finding a test is 211, the help call-line, and its affiliated web site 211ct.org, both operated by the United Way of Connecticut. Its listing are incomplete, showing only three of the eight or so testing sites in New Haven.

On Wednesday, a city administrative assistant, Amoy Kong-Brown and her husband, Phil Brown, were tested shortly before the mayor and senator. Kong-Brown said she was sickened with a cough and the loss of taste and smell, two symptoms strongly associated with COVID. Her husband was asymptomatic.

“Everyone should have the test,” he said.