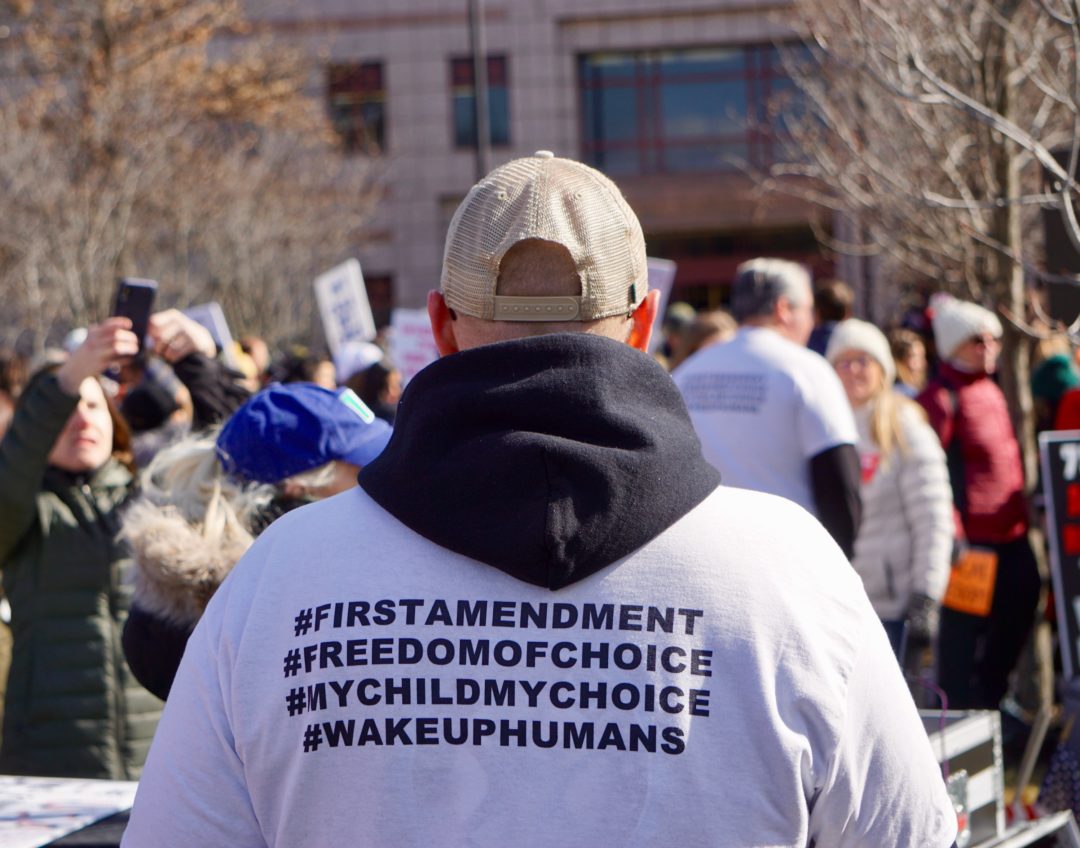 People opposed to a repeal of Connecticut’s religious exemption to vaccinations protested outside the state Capitol in February.

Legislative leaders, who initially intended to avoid controversial bills during a special session this summer, are now poised to tackle one of the most divisive issues: A measure that would remove Connecticut’s religious exemption from mandatory vaccinations.

Democratic leaders in both chambers said the COVID-19 crisis has made an already-pressing problem even more urgent – the declining rate of children being vaccinated because they are claiming a non-medical exemption. That has spurred them to push for a swifter vote on the measure.

The most recent version of the bill would permit all children who are currently enrolled in school and claiming a religious exemption to continue doing so, but would bar new children entering day care or the school system from claiming the exemption.

I believe in the bill now as much as I did then and, one could argue, even more so.” — Rep. Jonathan Steinberg, co-chair of the Public Health Committee

While children already enrolled in school would be ‘grandfathered’ in, some lawmakers believe even this group should not be allowed to abstain from getting a COVID-19 vaccination on religious grounds. Although there is not yet a vaccine for the novel coronavirus, which has killed more than 100,000 people in the United States, legislators said it is crucial for children to be immunized against the disease when one becomes available.

They are considering an amendment to the bill that would bar families from claiming a religious exemption to a future COVID-19 vaccine.

“The argument from the anti-vaccination community was that there was no emergency. It was, ‘What’s the rush?’” said House Majority Leader Matt Ritter, D-Hartford. “Well, there is an emergency now and we have no herd immunity.

“It’s very, very important that we get this done as soon as possible.”

The top Democratic lawmaker in the Senate agreed.

“The vaccine bill with the end to any non-health-related exemptions is a high priority for me and certainly should be for everyone else, given what we’ve now seen in a circumstance where there is not a vaccine available,” said Senate President Pro Tem Martin Looney, D-New Haven.

The measure will likely be as controversial now as it was in February, when the legislature’s Public Health Committee voted – less than three weeks into the regular session – to send the bill to the House floor. The committee did so over the objections of thousands of outraged parents, who flooded the state Capitol that month. Hundreds spoke against the measure at a public hearing that lasted more than 21 hours, and dozens more lined the streets outside the Capitol in protest.

The Department of Public Health has estimated that as many as 7,800 children were granted a religious exemption during the 2018-19 school year.

The bill was never taken up by the House, however, because the session was suspended three weeks later amid the coronavirus outbreak.

“We were only weeks away from running the bill in the House,” said Rep. Jonathan Steinberg, a Westport Democrat who co-chairs the Public Health Committee. “I believe in the bill now as much as I did then and, one could argue, even more so.”

Ritter, a key backer of the legislation, said the COVID-19 pandemic has brought renewed attention to the importance of vaccines. There also is concern that vaccination rates could drop further, he said, because parents fearful of the virus have been avoiding pediatrician offices and their children are missing important immunizations.

Data gathered by the state’s Department of Public health show 134 schools at which fewer than 95% of kindergarteners received a measles vaccination in 2018-19. The 95% threshold is recommended by the Centers for Disease Control and Prevention to maintain herd immunity.

The DPH data also show a 25% increase between 2017-18 and 2018-19 in the number of kindergarteners abstaining from the measles, mumps and rubella vaccine on the basis of religion – the largest recorded by the state since it began tracking the information a decade ago. 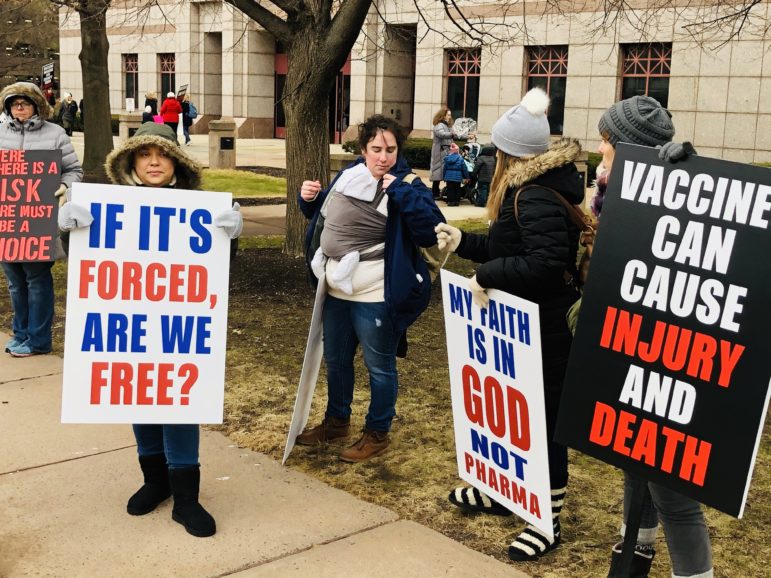 Protestors outside the Capitol before a public hearing in February.

Republicans are raising concerns about the timing of effort.

Senate Minority Leader Len Fasano, R-North Haven, said proponents of the legislation are using the coronavirus crisis to stoke fear in the hopes of getting the bill passed.

“They’re using a pandemic to fear monger and get a bill passed that they could not get passed last year,” Fasano said. “I don’t see the urgency because you’re not talking about a statistical number that’s going to affect anything. It’s not going to overrun the healthcare system, because COVID-19 really does not go after kids.”

“This is just trying to conflate the issues to achieve a purpose for which they failed last session,” Fasano added. “There’s no reason why it can’t wait until next session.”

Rep. William Petit, a ranking Republican on the Public Health Committee and a retired endocrinologist, said he supports vaccinations, but he questioned whether a special legislative session was the best forum in which to tackle the issue.

They’re using a pandemic to fear monger and get a bill passed that they could not get passed last year.” — Senate Minority Leader Len Fasano

“I’m a little reticent, as a practical matter, to bring it up in a special session because it will take a lot of time and energy,” he said. “We don’t have a COVID vaccine yet, and I think we can probably do this next year.”

Petit said he would wait to see the latest draft of the measure before deciding whether to support it.

Brian Festa, the founder of CT Freedom Alliance, an organization opposed to a repeal of the religious exemption, called the push to take up the bill in a special session “ridiculous.”

“There is no COVID-19 vaccine and we don’t even know when a safe and effective vaccine will be available, or if that’s ever going to be available,” he said. “It’s a little ridiculous … to try to push this legislation through for vaccines that have nothing to do with COVID.”

There is no date yet for the special session. Lawmakers, who face re-election this fall, hope to schedule it for late June or early July.

They are still working through logistical issues to create a safe environment for debate and voting amid the pandemic. There are 151 members of the House and 36 in the Senate – far too many to safely gather in one space at a time.

Party leaders are considering new ways to conduct business – including requiring all legislators to report to their offices and only allowing a small group of them into the chambers at a time.

“There’s some meaty stuff that has to get done,” Ritter said. “We have campaigns in the fall. So I think it’s fair to say that the time to do it is June or July.”