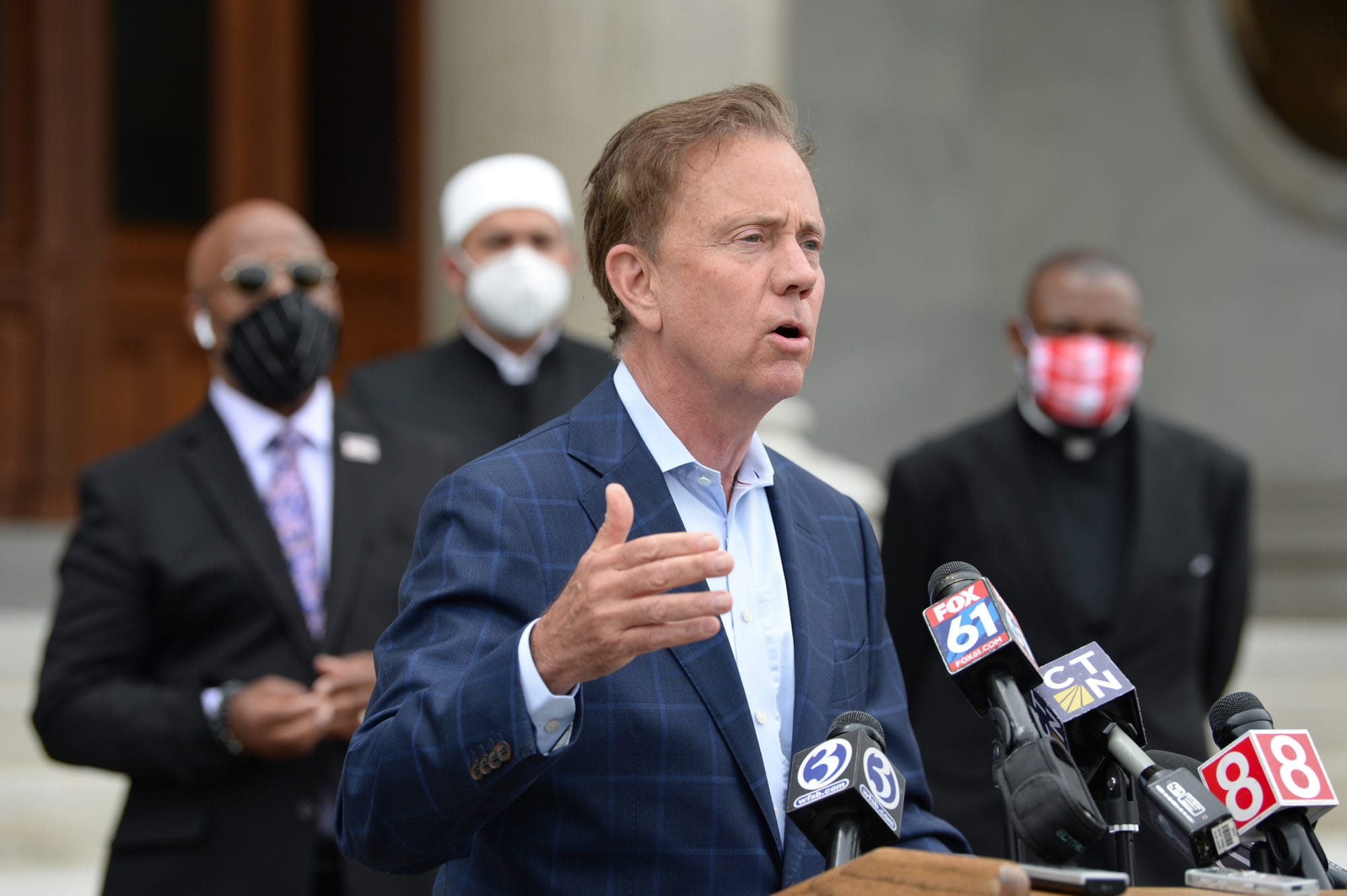 Gov. Ned Lamont speaks at a press briefing on the gradual reopening of religious services, which have been shut down due to the COVID19 pandemic, on the steps of the state Capitol Friday afternoon. He was joined by several representatives from the faith community, many of whom spoke about the reopening plans for their congregations.

Hospitalizations due to the COVID-19 pandemic experienced the largest one day drop to date, Gov. Ned Lamont said Friday, while other public health data indicate positive trends are continuing as the state gradually reopens its economy.

Numbers released Friday afternoon show 577 people are now hospitalized with COVID-19, a drop of more than 70 people since yesterday. The governor said it was the largest one day decline to date. The state reported 203 new cases of COVID-19, bringing the total to 41,762 total cases overall.

“Outside is safer than inside,” Lamont said.

Members of the governor’s Faith Advocacy Council joined Lamont on the steps of the State Capitol Friday to discuss the public reopening of places of worship.

They also shared reaction to the death of George Floyd and the riots in Minneapolis, Minn.

Minnesota officials announced Friday afternoon the former police officer who pinned Floyd under his knee would be charged with murder.

Lamont said Connecticut residents have reason to be angry about the death of Floyd.

“It reminds all of us every day what it means to be part of a common humanity,” Lamont said. He called for a need for diversity in state and local police forces, teachers, and faith leaders.

The governor repeated his disagreement with tribal leaders’ decision to reopen Foxwoods and Mohegan Sun in the next few days. Both casinos said Friday that they invited a select number of guests to the casinos this weekend and that they plan to reopen Monday to the public, with limits on visitor numbers.

But Lamont said his administration and tribal leaders had reached some common ground, however, and that he agrees with the casinos’ decisions to bar out of state guests from staying at their hotels. He also he is pleased the casinos will make dining takeout or outdoor only through June 20.

Tribal leaders and the governor’s office are still discussing whether smoking will be allowed and how alcohol will be served.

Foxwoods and Mohegan Sun both have announced safety measures that include checking people’s temperatures as they enter, plexiglass at table games and the closure of certain slot machines to encourage social distancing. The casinos are on tribal land which are sovereign nations not held to the state’s COVID-19 regulations.

Lamont said Friday that the state may post electronic signs warning of the danger of returning to the casinos.

Lamont announced Friday loosened guidelines to reopen in-person worship services. Places of worship could open to 25 percent capacity or 100 people — whichever is smaller — for inside services and 125 people for outside services as long as social distancing standards can be observed, under the new guidelines. 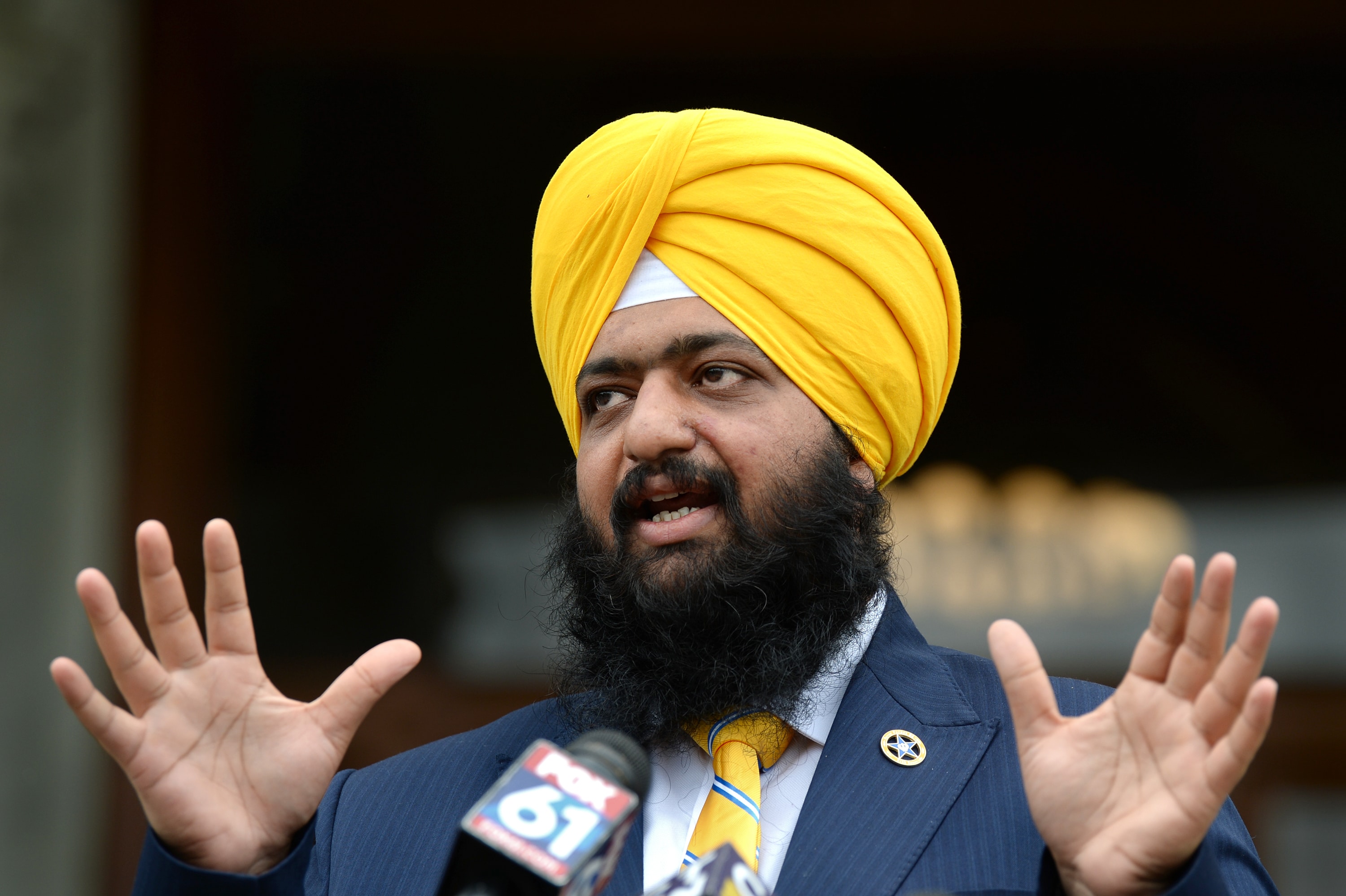 Swaranjit Singh Khalsa, of Gurdwara Sachkhand Darbar in Hamden, speaks on behalf of the Sikh community at a press briefing with Gov. Ned Lamont Friday.

Members of the governor’s Faith Advisory Council voiced support for a slow reopening along with new standards. “What was, will never be again,” said Lindsay E. Curtis, pastor at Grace Baptist Church in Norwalk.

Many churches in the state will remain closed to the public for the foreseeable future. While some church staples, like communion and singing, at those that open their doors will depend on the guidance of individual church leaders.

Episcopal churches in the state will remain closed, said Ian Douglas, Bishop Diocesan of The Episcopal Church in Connecticut. Steele said his church has begun offering communion in individual, single-use cups. First Calvary Baptist Church in New Haven will have one soloist instead of its usual choir when it does reopen, said Boise Kimber, president of the Greater New Haven Clergy Association and senior pastor of the church.

The three Catholic dioceses in Connecticut say they will be gradually resuming weekday masses, funerals, and weddings. But churchgoers looking for Sunday services will have to wait a little bit longer.

The Dioceses of Bridgeport announced Friday that it would resume daily mass, funerals and weddings inside churches beginning the weekend of June 13 and 14.

Daily masses may resume inside churches in the Archdioceses of Hartford and Diocese of Norwich beginning June 8. Services will be limited to 50 attendants. 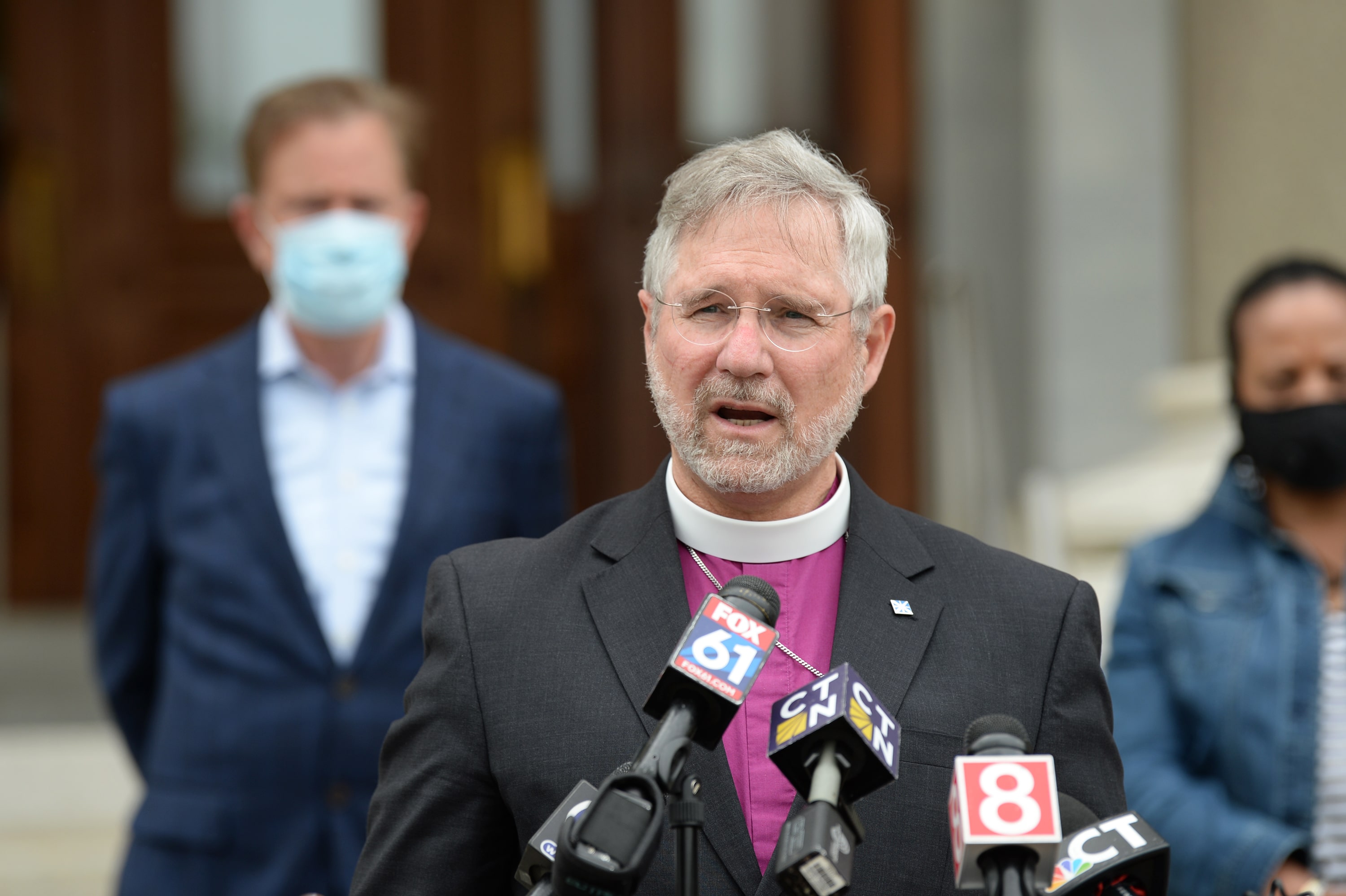 Bishop Dr. Ian T. Douglas of the Episcopal Church in Connecticut speaks at a press briefing with Gov. Ned Lamont and several faith leaders at the state Capitol on the gradual reopening of religious services.

Churches in the Archdioceses of Hartford and the Diocese of Norwich will also reopen for funerals and weddings, but Sunday masses will remain temporarily closed to parishioners to attend in person, both dioceses announced Wednesday.

“Testing is key to overcoming this pandemic, especially in communities of color that have been hard hit. This is a significant step forward in addressing these disparities and stopping the spread of COVID-19,” Larson said in a statement.

According to data collected through Wednesday, 2,398 nursing home residents and 327 tenants of assisted living centers have died from COVID-19 since the pandemic began.

Total deaths among nursing home residents rose by 208 over the last weekly reporting period, an increase of 9.5%. That marks the fifth consecutive week this growth rate has declined.

“We continue to believe that our state’s efforts to combat COVID-19 are moving in the right direction,” representatives of the assisted living and nursing home facilities wrote Friday in a joint statement. “We are the near completion of the point prevalence survey testing of all nursing home residents and will soon be launching widespread employee testing – all part of a comprehensive plan to further curb the spread of the virus.

Infections also are growing at a slower pace in nursing homes for the fifth straight week.

The latest report says another 447 residents became infected between May 21 and May 27, an increase of nearly 6%.

State health officials haven’t been tracking coronavirus cases as long in Connecticut’s more than 130 assisted living facilities. These centers serve residents age 55 and older who need some assistance with daily living activities but not the skilled care provided by a nursing home.

The latest report found an additional 21 residents of these managed care centers died during the last weekly reporting period, an increase of 6.4%.

Deaths had risen by 11% during the week ending May 20.

Infections among this population  increased by 34 over the last period, a bump of 3.5%, after growing by nearly 12 percent during the week ending May 20.

Connecticut’s Public Utilities Regulatory Authority announced Friday that it extended a moratorium preventing the shutoff of natural gas, electric and water services to businesses through July 1.

The authority had announced a similar moratorium for residential customers as long as the governor’s civil and public health preparedness emergencies are in effect.