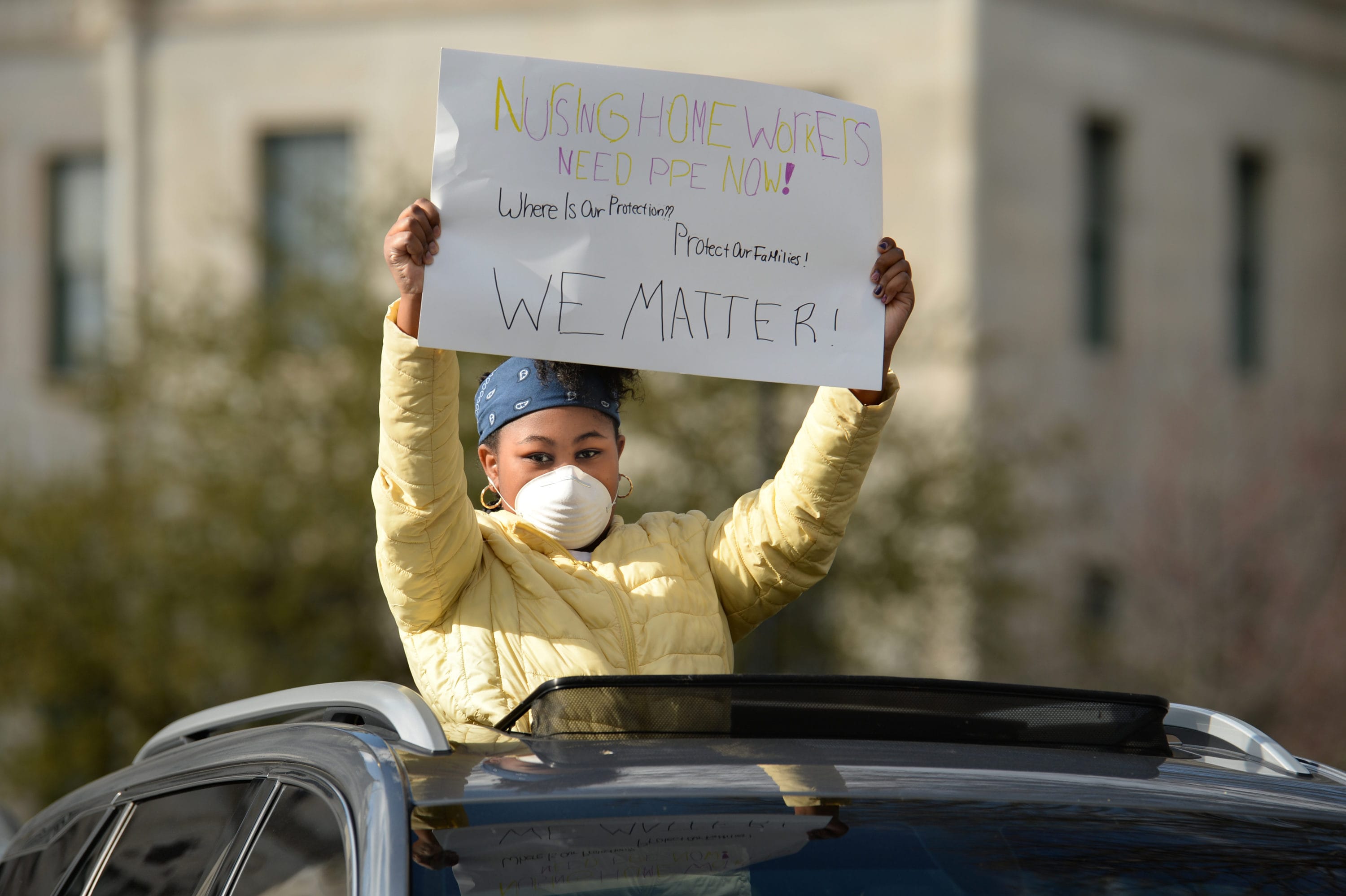 A healthcare worker with 1199 SEIU holds a sign demanding more PPE, or Personal Protective Equipment, to protect from Covid-19 during a Caregivers Caravan of union nursing home workers at the state Capitol last week.

State health officials confirmed Monday that more than half of all coronavirus-related deaths in Connecticut involve nursing home residents — despite very recent projections that it had been closer to one-third.

The state reclassified the cause of death last week — to COVID-19 — for some nursing home residents as they worked with local health officials to develop a more uniform method of assessing the pandemic’s impact on the industry.

“We wanted to make sure we were reporting the deaths as accurately as possible,” Dr. Lynn Sosa, deputy state epidemiologist, told the CT Mirror on Monday. “There was a lot of data coming from multiple sources and we were really doing the best that we can.”

Gov. Ned Lamont released a report last Thursday that showed 375 nursing home residents had died from the coronavirus between the pandemic’s start and April 14.

That’s a 76% percent increase — 212 more COVID-19-related deaths among residents — from the total reported on April 13.

Coronavirus-related deaths among residents hadn’t increased by more than 30 people even once between April 7 and 13.

Put another way, the state report indicated 35% of all coronavirus-related deaths in Connecticut involved nursing home residents through April 13, but by the following day it had swelled to 56%.

Health care experts have warned repeatedly that patients over 60 are among the most vulnerable to complications from the disease and the average age of nursing home admissions in Connecticut is around 80.

Still, the April 14 death total was clearly an outlier — or the totals reported earlier in the month likely were too low.

State health officials concluded the data collected from April 7-13 was the problem.

Reassessing who died from COVID-19

The administration began adding nursing home numbers to its daily briefings on April 7, assigning staff each morning to call all of the state’s 213 nursing homes, Sosa said. Information from the calls was placed in a spreadsheet that was constantly updated as nursing homes reported developments to the state’s epidemiology lab.

But even with those daily efforts, there was a hole.

State records on cause of death didn’t always match up with those of local health districts.

And health officials discovered it April 14 and 15 when the administration took time off from reporting nursing home data to create a new digital reporting system to replace the daily phone calls. 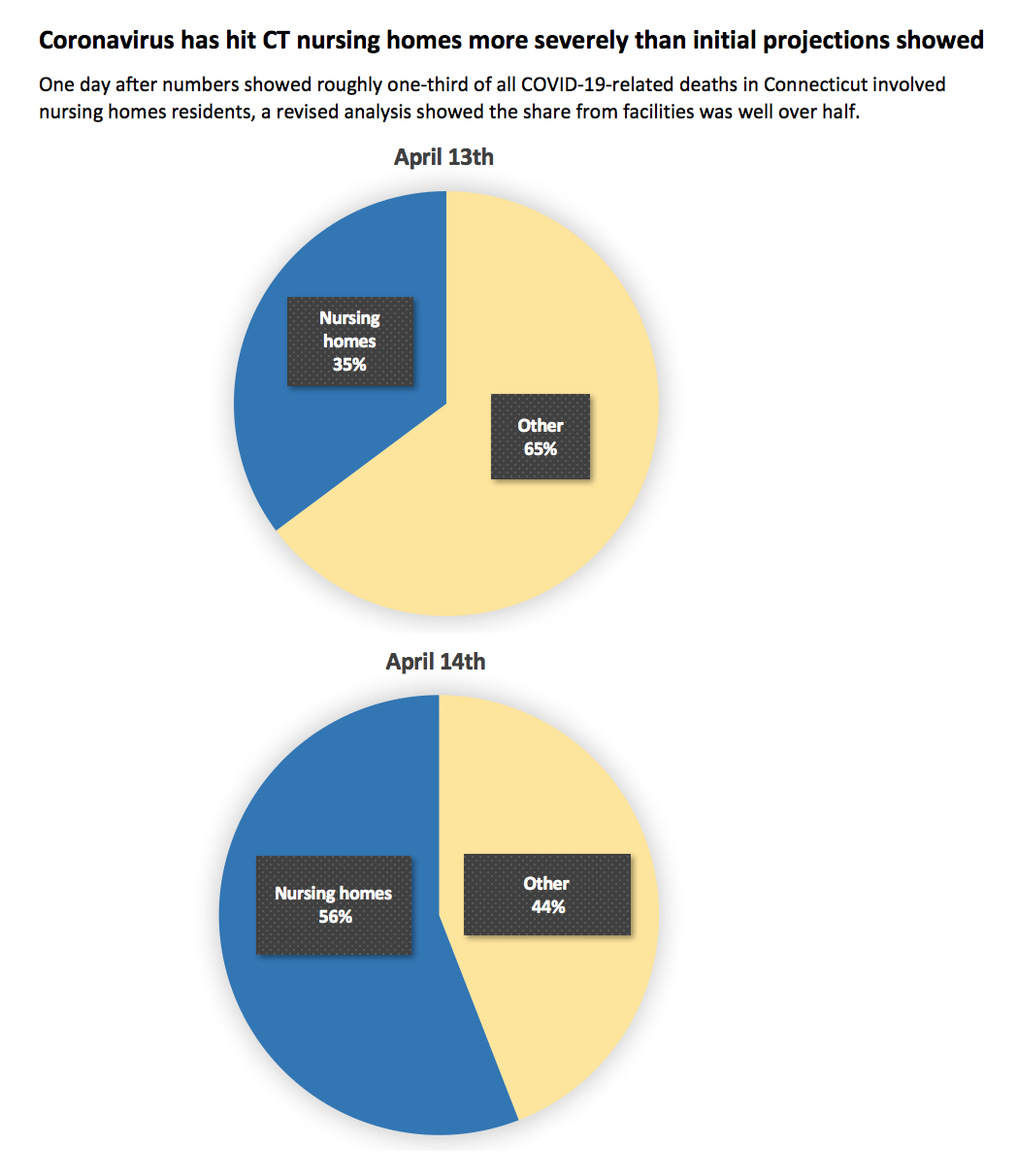 In some instances, nursing home residents that were showing COVID-19 symptoms — but had not been tested before dying — were categorized differently. Some were reported as positive. Others simply were reported as having died from respiratory illnesses.

And a shortage of time and available test kits also meant it wasn’t always feasible to clarify every uncertain case immediately, Sosa said.

After two days of conferring, state and local health officials had a better, unified understanding on how to identify COVID-19. Officials decided to conclude that the coronavirus was responsible for death when a preponderance of medical evidence pointed in that direction.

“We have to act now to stop this from creating any further spread in our most vulnerable population,” said Deputy House Minority Leader Vincent J. Candelora, R-North Branford. “With the new numbers we have, we have to be sounding the alarm.”

Candelora said state government should immediately ensure that all nursing homes have adequate supplies of masks, gloves and other personal protection equipment, as well as the training to use them.

“It’s important that we have the best data so we can evaluate our response and the direction we go in as a state,” said Rep. Toni E. Walker, D-New Haven, co-chairwoman of the Appropriations Committee. “I know the administration is trying very hard to do everything that is possible. But the data is saying this is not working.”

The Lamont administration announced Sunday it was expanding its emergency Medicaid rate increase for nursing homes from 10% to 15%. But this followed a letter from nursing home industry leaders warning facilities were days away from financial catastrophe due to increased coronavirus-related staffing and equipment costs.

The Lamont administration also recently announced it would begin visits to every nursing home in the state to better understand their needs.

“The incidents of COVID-related deaths are increasing in nursing homes, consistent with data indicating the impact the virus has on older populations” wrote Matthew Barrett, president of the Connecticut Association of Health Care Facilities and Mag Morelli, president of LeadingAge Connecticut. “We need to be sure the data we are collecting and the manner in which it is collected is gathered and reported consistently and accurately so that we can utilize it to the fullest extent in our efforts to fight this historic and unprecedented pandemic.”