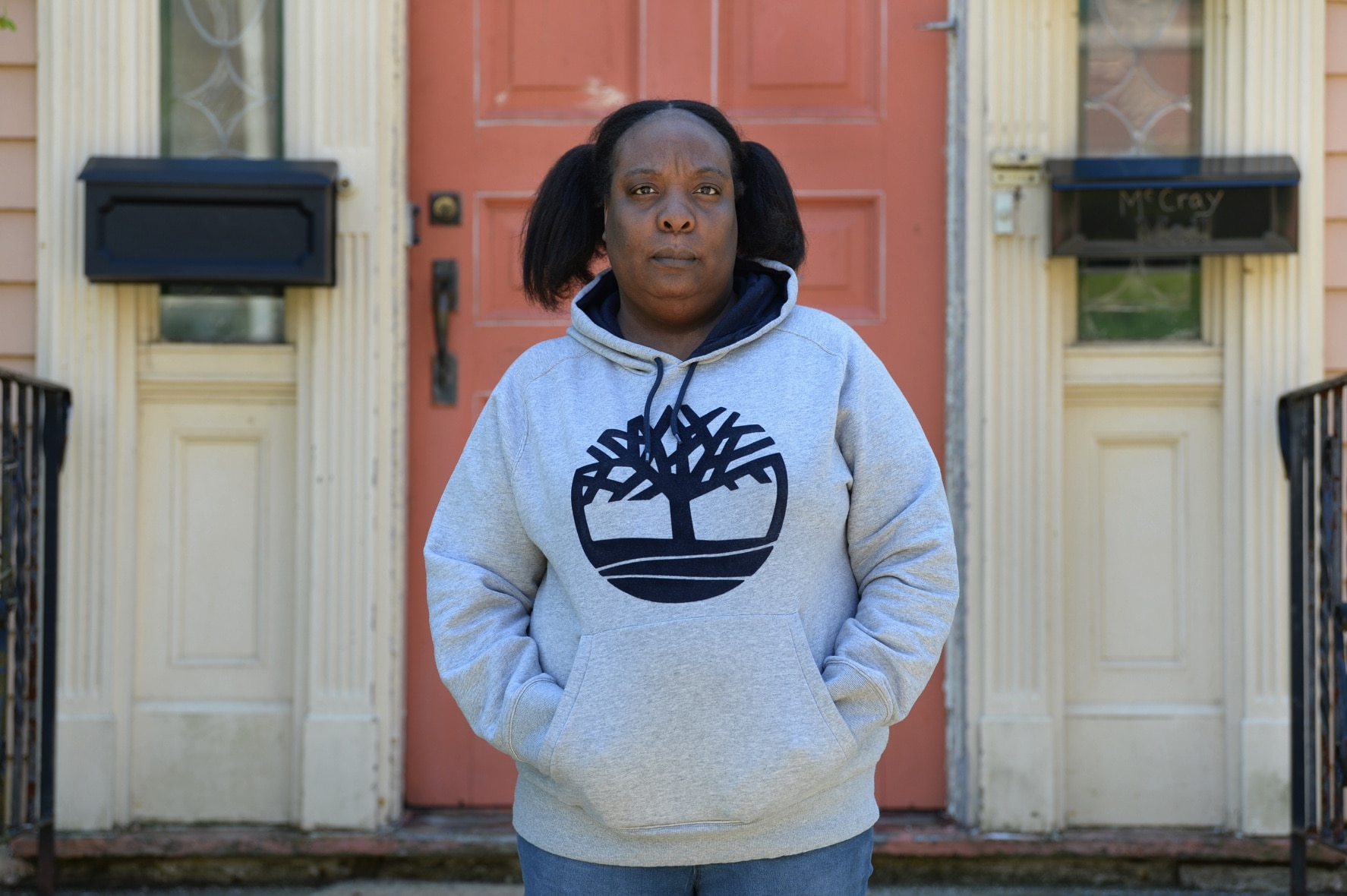 Ayishea Denson stands in front of the three-family home where she lives in New Haven. Denson is a social worker for the Department of Families and Children and is working from home. “A lot of the families don’t have FaceTime and all that so it’s hard to get a visual on the children,” she said.

Ayishea Denson is growing more and more worried about what will happen now that Connecticut has begun to reopen its economy. She has ample reason to be afraid.

This is the second story in an occasional series featuring the experiences of people from around Connecticut.

For starters, Denson had a stroke a couple of years ago and suffers from asthma – two factors she knows put her in a high-risk category if she contracts COVID-19. She is also African-American, the racial group that has the greatest incidence of infection and mortality from this disease.

But perhaps more significantly, the 44-year-old social worker has seen how much suffering the pernicious coronavirus has caused in her community, and she fears it will cause more.

“I think it’s too soon to open up everything,” said Denson, of New Haven. “Too many people have died.”

The coronavirus has already killed four people from her church. The weight of those losses has been greater because she couldn’t help comfort the friends and family left behind.

“It’s a lot to deal with,” Denson said. “I knew a guy who passed away from COVID… and they had a drive-by funeral for him. I felt really bad, and I thought, ‘Is this what the world is coming to?’ ”

The husband of a woman Denson knows from church died from the disease just last week. “He was doing well, got his sense of smell back, and his wife posted on Facebook that he was out of the intensive care unit,” Denson said. “Then he just died.”

I think it’s too soon to open up everything. Too many people have died.”

Another friend’s father recently died in a Connecticut nursing home. “I feel so bad for her,” Denson said. “She never got to say goodbye.”

A former prison inmate herself who is now working on her master’s degree, she also knows people still stuck inside correctional institutions where the disease continues to spread.

The husband of one of her friends caught the virus while in prison.

“Medical care in the prison system is terrible,” Denson said. “He has only six months left on his sentence… He’s non-violent and they should parole him out.”

Denson lives with her son and husband in an apartment in New Haven’s Westville, a more affluent neighborhood than some of the city’s poverty-ridden sections.

“Where I live, people do wear masks,” Denson said. “But when you go further down Whalley Avenue [into some of the poorest areas of New Haven], a lot of people are out and they’re not wearing masks.”

She said she feels fortunate because she and her husband, Lyvant Williams, who works for an environmental cleaning company, both have jobs.

“It’s a blessing,” said Denson. She knows many of her friends and their families are struggling because of layoffs and the long wait for unemployment benefits. 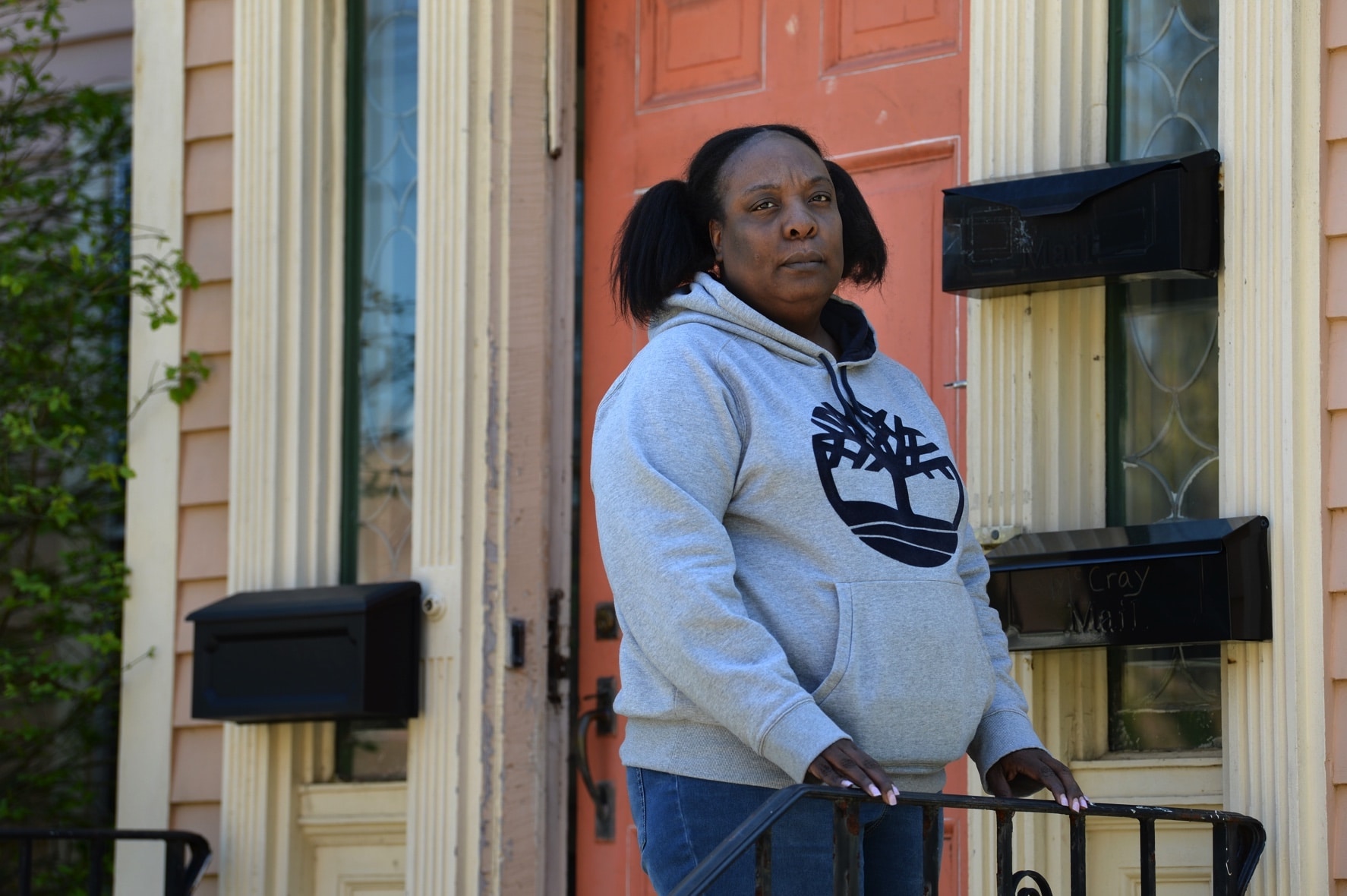 Ayishea Denson wishes the governor had waited longer to reopen the state. A case worker for the state Department of Children and Families, Denson is worried about the children on her caseload, and about herself and her husband.

Denson has been working from home since her state Department of Children and Families office was shut down on April 2. “It’s pretty difficult,” she said of her job during the pandemic. Many of the families she deals with don’t have computers which means “You can’t see the kids,” Denson explained, “and you get attached to the children on your caseload.”

The long-running effort to maintain social distancing has also caused tensions within her own home.

She and her son, Dyante Howard, are constantly clashing because he’s fed up with staying inside, she said. He wants to go out and play ball, socialize with his friends.

“My son is 19,” Denson explained. “He doesn’t get that, by him going out, he’s endangering me … he thinks I’m over-reacting.”

Denson spent eight years in prison for a first-degree assault conviction. She got out in 2010 and decided she was never going back.

“I changed my life altogether,” she said. “I don’t deal with anyone from my past.”

Denson worked two jobs while getting her associate’s degree in social work from Central Connecticut State University. While there, she met former state Rep. Bill Dyson, an influential African-American from Denson’s hometown of New Haven.

“He told me I had to keep going,” she recalled. “He never lost contact with me.”

The result was that Denson got her bachelor’s degree in social work and plans to finish her master’s next year. “It was a lot of hard work,” she said of how her life has changed in the past decade.

My son is 19. He doesn’t get that, by him going out, he’s endangering me … he thinks I’m over-reacting.” — Ayishea Denson

While she left most of her old life behind, Denson has never lost touch with some of the people she met in prison and she knows how much they are suffering in this pandemic lockdown.

“There are a lot of people I was incarcerated with who are depressed,” Denson said. Stuck at home for months, some out of work, lonely because they can’t see their friends, unable to go to the gym or a hair salon – Denson said the pandemic lockdown has been particularly grim for former inmates.

Denson knows people want to get out, that they’re bored just like her son and are hoping life can get back to something at least close to normal.

But she believes it’s simply too soon. Reopening the economy now is asking for more trouble, Denson said.

“There are just going to be more deaths.”