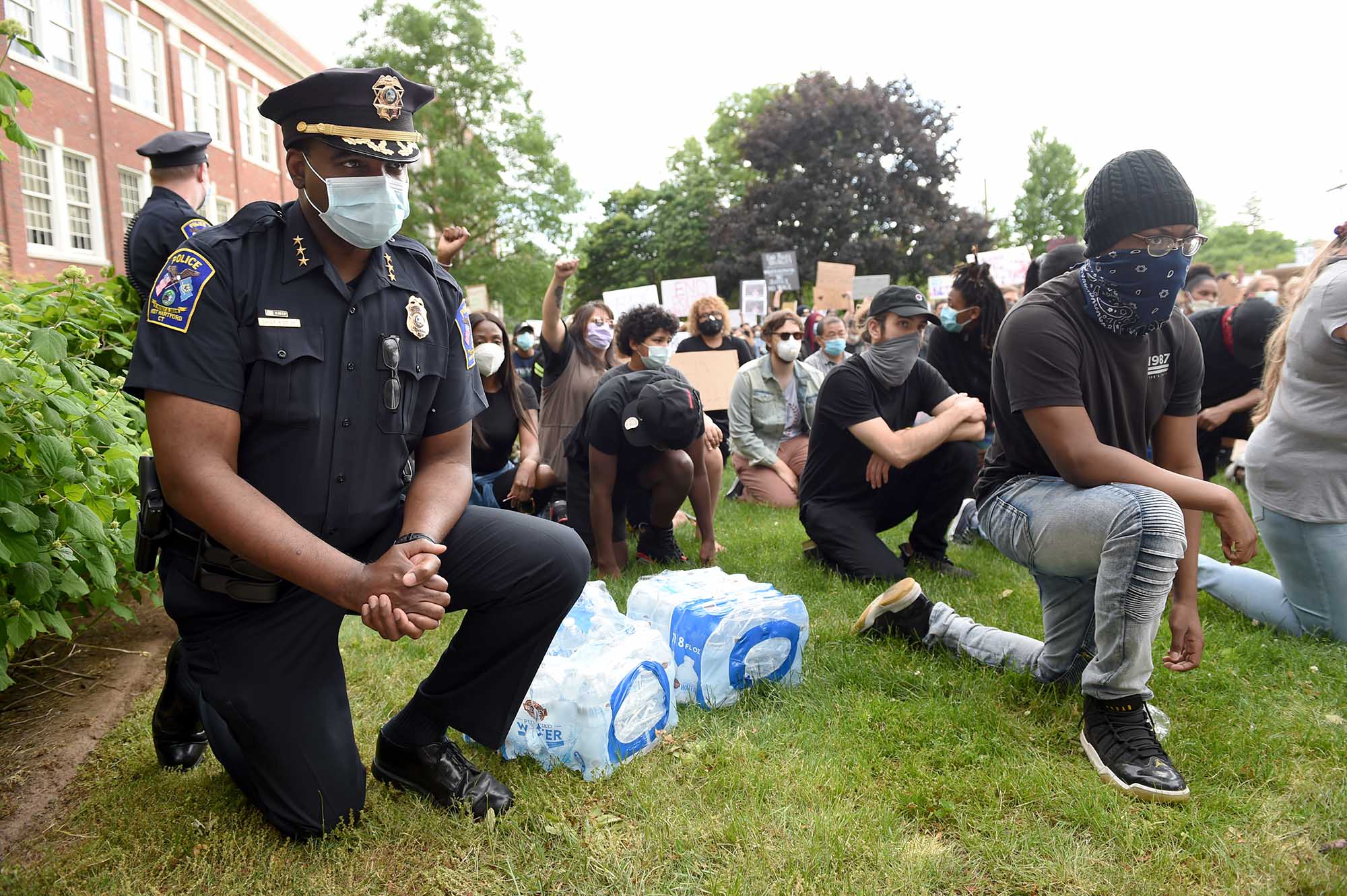 Gov. Ned Lamont dismissed President Donald J. Trump’s call for governors to use the U.S. military to crack down on police-brutality demonstrations and suggested Tuesday that the president look to states like Connecticut where he says police and protesters generally have demonstrated mutual respect.

“There’s a lot of ideas that pop up, and I’m not going to overreact to any one of them,” Lamont said of the president’s call for a military response. “I think we are handling the situation here in Connecticut. I hope to God the protesters think we’re doing a good job. We’re working together on this, and I hope he’ll be able to learn from our example.”

Lamont noted the differences in two protests Monday: the violent dispersal of peaceful demonstrators in a park across from the White House, so Trump could walk outside for a photo op, and another in Hartford where Mayor Luke Bronin and police expressed solidarity with protesters outraged by the death of George Floyd.

Lamont praised the State Police commander who prayed with protesters who blocked I-84 in Hartford Monday in a demonstration organized by Black Lives Matter.

“The people dispersed,” Lamont said. “That was the Connecticut way.”

Lamont refused a federal request to send a Connecticut National Guard unit to Washington D.C. to support the Trump administration’s efforts to put down protests, but the governor said the refusal was born of need in Connecticut, not politics.

“We need our Guard right here in Connecticut,” Lamont said. The National Guard has been active during the COVID-19 pandemic building and dismantling field hospitals and overseeing the distribution of personal protective equipment.

The state offered the use of the Air National Guard’s cargo planes, he said.

Lamont’s message of the willingness by state and local law enforcement to engage the protesters was underscored an hour later by a peaceful demonstration organized in West Hartford center by Black Lives Matter.

One of the speakers was Mike Oretade, a pre-school teacher in Manchester who helped organize the Hartford protest on Monday and promised of others to come.

“Right now, the world is raging,” he said. 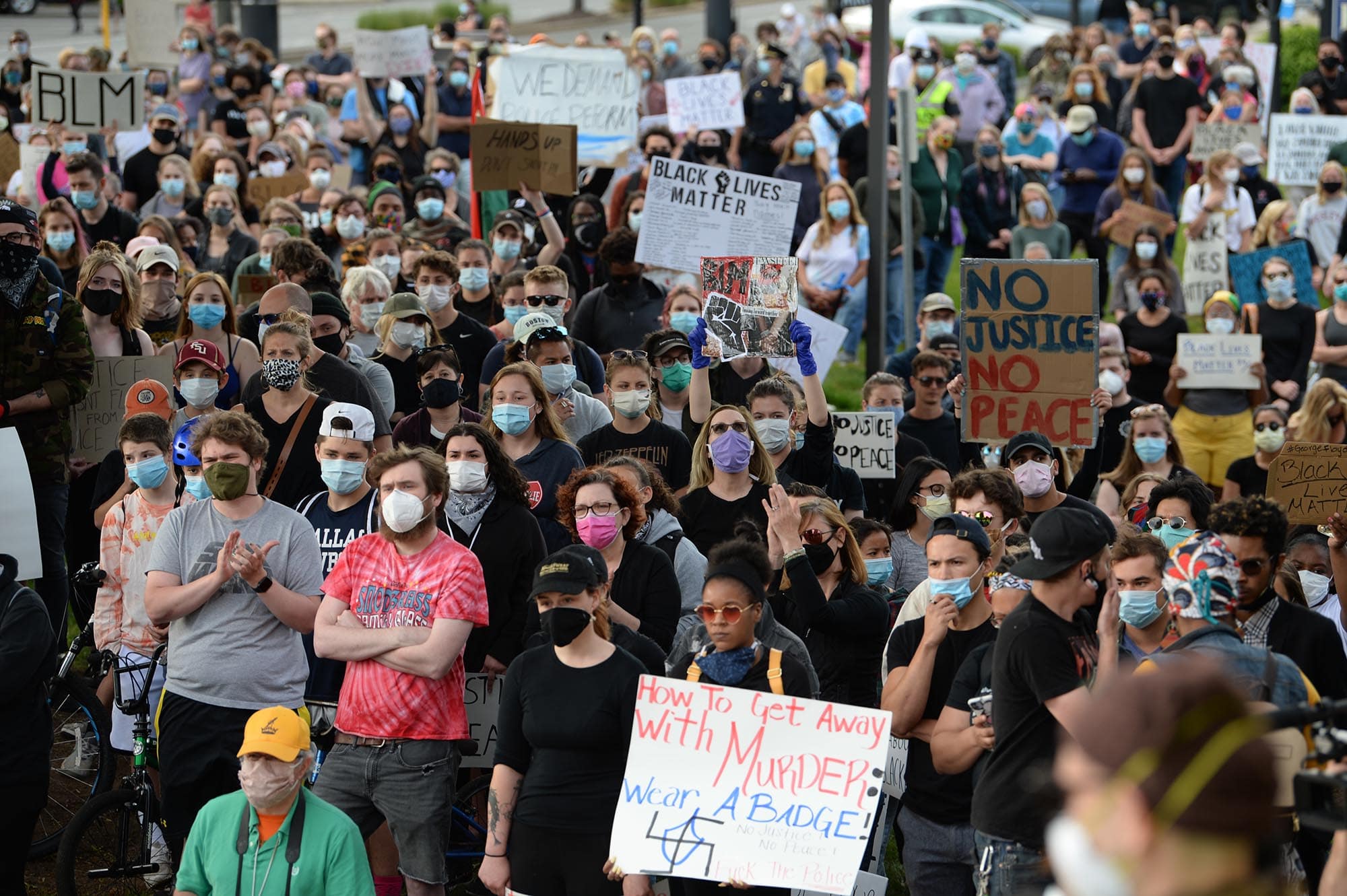 Vernon Riddick Jr., the town’s police chief, told the gathering that he was sickened by the video of a white Minneapolis police officer casually kneeling on the neck of George Floyd, while three other officers did nothing.

“The good cops have got to stop the nonsense,” Riddick said. The demonstrators applauded.

Riddick, who is black, said he too well understands the fear that a routine interaction with police could turn deadly.

His brother, who was a Waterbury police lieutenant, died of cancer in 2010. Riddick rose through the ranks in Waterbury, retiring as chief before taking the West Hartford job two years ago.

Riddick asked the protesters to consider joining the profession they are trying to change, invoking Barack Obama’s insistence that change will not come by waiting for others, that “we are the change that we seek.”

It was not an applause line.

Janée Woods Weber, who ran unsuccessfully for town council last year, said she was grateful that Riddick was the police chief, but no community is immune from racism, including West Hartford.

She told first-time suburban protesters that their attendance was welcome, but only if it is a first step.

Lamont has pledged to make the state’s judiciary more racially representative, but he was non-committal during his briefing at the Capitol when asked about “police reform legislation.”

“It’s just too vague,” Lamont said. “I don’t know what ‘police reform legislation means, but I’m happy to find out.”

For now, the governor seems to be satisfied to be on the side of protecting the right to peaceful protest and opposed to a president he sees as hungry for confrontation.

Trump said Monday that “mayors and governors must establish an overwhelming law enforcement presence until the violence has been quelled. If a city or state refuses to take the actions that are necessary to defend the life and property of their residents, then I will deploy the United States military and quickly solve the problem for them.”

The president threatened to invoke the Insurrection Act, a centuries-old federal law that allows state officials to seek the help of the U.S. military to quell civil unrest.

Attorney General William Tong said Tuesday his office would oppose the deployment of troops to Connecticut.

“The Insurrection Act is a tool to protect civil rights, not to extinguish them,” said Tong. “It was used during the civil rights movement to defend African Americans against racist state and local governments. We stand ready to defend our democracy and our residents in court.” 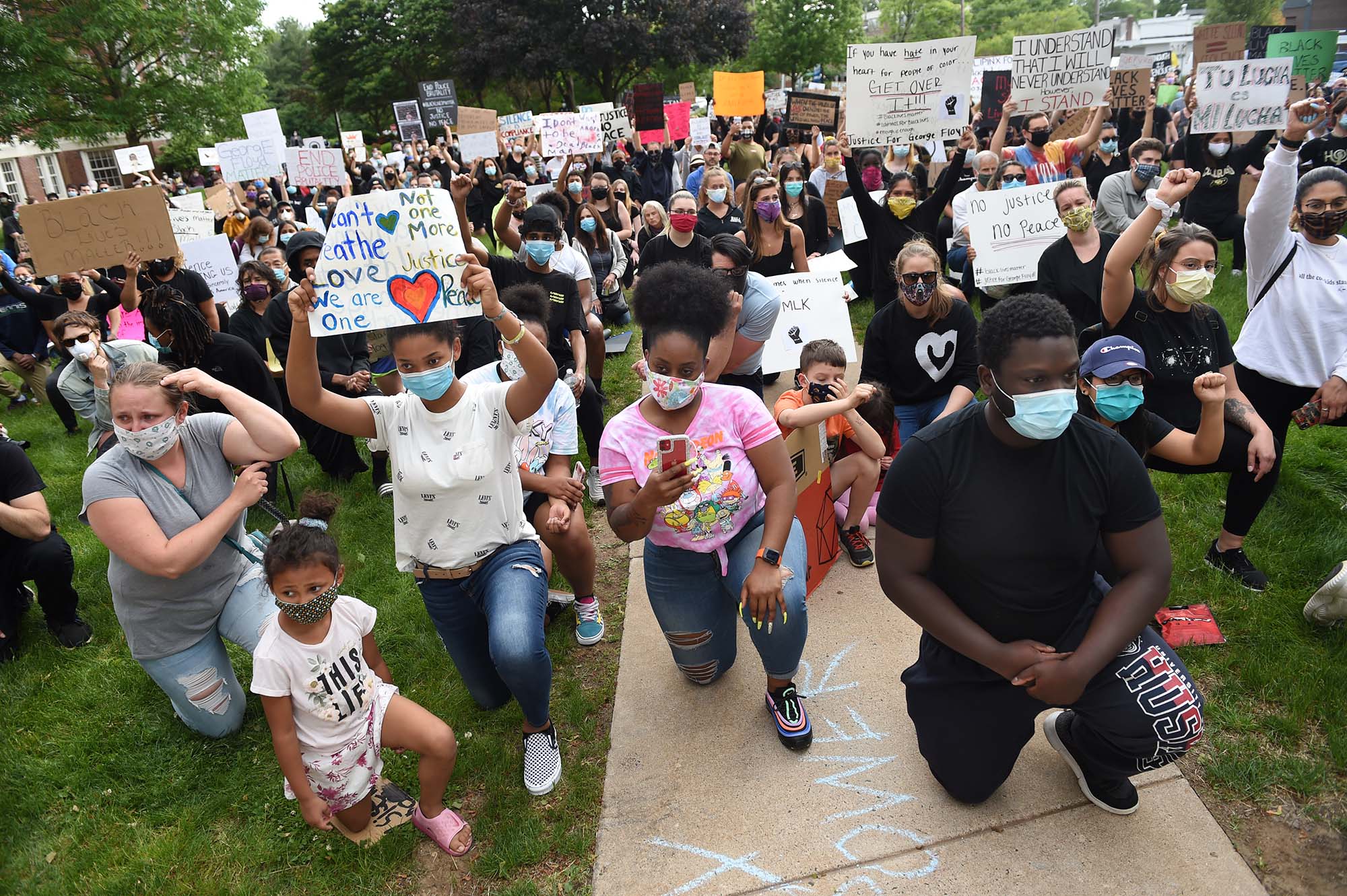 A crowd of about 1,500 people took to their knees for eight minutes to commemorate the time it took for a Minneapolis police officer to kill George Floyd on Memorial Day during a Black Lives Matter rally at West Hartford Town Hall.

Tong said the law enforcement sweep through Lafayette Park, which preceded Trump’s walk to a nearby church so he could be photographed holding a Bible, was a hint of the president’s willingness to misuse authority.

“Trump gassed peaceful protesters for a photo op. He is not done. He is just getting started. This is not a rehearsal,” Tong said. “This is the constitutional crisis we have long feared. Our democracy is being tested. It’s time to pull every lever we have to defend our country. No one gets to be silent now.”

Lamont was restrained in his rhetoric. He said no military intervention is necessary or desired in Connecticut, though he acknowledged the potential of violence, either spontaneous or provoked by the “agitators” that police say have been identified by federal law enforcement authorities.

“We are not naive, believe me,” Lamont said.

Lamont was accompanied at his briefing by Col. Stavros Mellekas, the commander of the Connecticut State Police. New Haven Police Chief Otoniel Reyes joined them by video conference.

Mellekas said the local protesters do not want the interference of outsiders, some who have been tracked going from state to state.