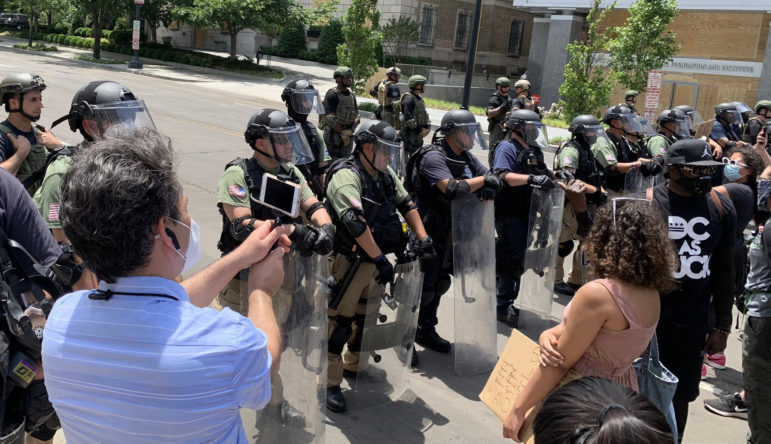 Unidentified troops near the White House.

Washington – Sens. Richard Blumenthal and Chris Murphy on Wednesday joined a group of fellow Democratic senators in pressing Pentagon chiefs about the use military force on protesters who have marched and demonstrated in dozens of American cities.

Blumenthal and Murphy wrote Department of Defense Secretary Mark Esper and Chairman of the Joint Chiefs of Staff General Mark Milley a letter signed by 21 Senate Democrats that asked the military leaders whether the Pentagon would deploy federal troops under  the Insurrection Act. The act is  a 1807 federal law that empowers the president to deploy military troops within the United States in particular and extreme circumstances, such as to suppress civil disorder, insurrection and rebellion.

“President Trump’s behavior over the last three years has repeatedly politicized our Armed Forces and portrayed their mission not as one to protect and defend the Constitution, but rather to protect and defend his political interests,” the senators wrote.  “The military should never be weaponized by the President to limit these expressions for liberty and justice. We believe it is antithetical to what those in uniform have sworn to protect and defend, and a serious threat to our democratic system.”

President Donald Trump this week threatened to use the Insurrection Act to quell what he considers lawlessness by people who have demonstrated to protest the death of a black Minneapolis man, George Floyd, who was fatally choked under the knee of a white police officer.

Some attending the protests have rioted and looted, but they have largely been peaceful, even as curfews imposed on several cities this week, including Washington D.C. , New York and Los Angeles, have been ignored by protesters.

The senators asked Esper and Milley if deployments would ever include combat-designated troops, how troops would be trained and prepared, what the mission, scope, and rules would entail for the use of force and if these troops would  be authorized to perform arrests.

Esper and Milley accompanied Trump when he walked out of the White House on Monday through Washington D.C.’s  Lafayette Square, which had been cleared of peaceful protesters by force to enable them to stand for a photo outside the historic St. John’s church. Esper, meanwhile, advised the nation’s governors to “dominate the battlespace,”  by which he meant American streets.

Wednesday, however, Esper said he does not support using active duty troops to quell the large-scale protests. “The option to use active duty military should only be as a last resort,” Esper said.

His comments are said to have displeased the president, and after a meeting at the White House, the defense secretary reversed himself on a decision to send home soldiers from Fort Bragg, N.C., and Fort Drum, N.Y. The soldiers had been dispatched to the Washington D.C. area last week.

Earlier this week Esper asked governors, including Ned Lamont, to send their guardsmen to Washington. D.C.

Capt. David Pytlik, spokesman for Connecticut’s National Guard, said the state was asked to provide troops to help keep the peace, but the state offered aircraft and air crew instead to help ferry guardsmen from other states to Washington D.C.

So the Connecticut Air Guard, which fly C-130 military transport aircraft out of a base at Bradley International Airport, are “on standby,” Pytlik said.

National Guard troops that have been sent to Washington D.C. are still under their governor’s command. They have not been “federalized” under a statute known as Title 10 that would put them under the command of the armed forces.

Rep. Rosa DeLauro, D-3rd District, said Ellison “has moved swiftly to render justice in the wake of the senseless killing of George Floyd.”

“Today’s announcement sends a clear message that no one is above the law,” she said. “But much, much more remains to be done to root out the issues of systemic racism that have plagued our nation. The work of justice must continue.”