'Summer is coming. It's time to get our holiday season going.' 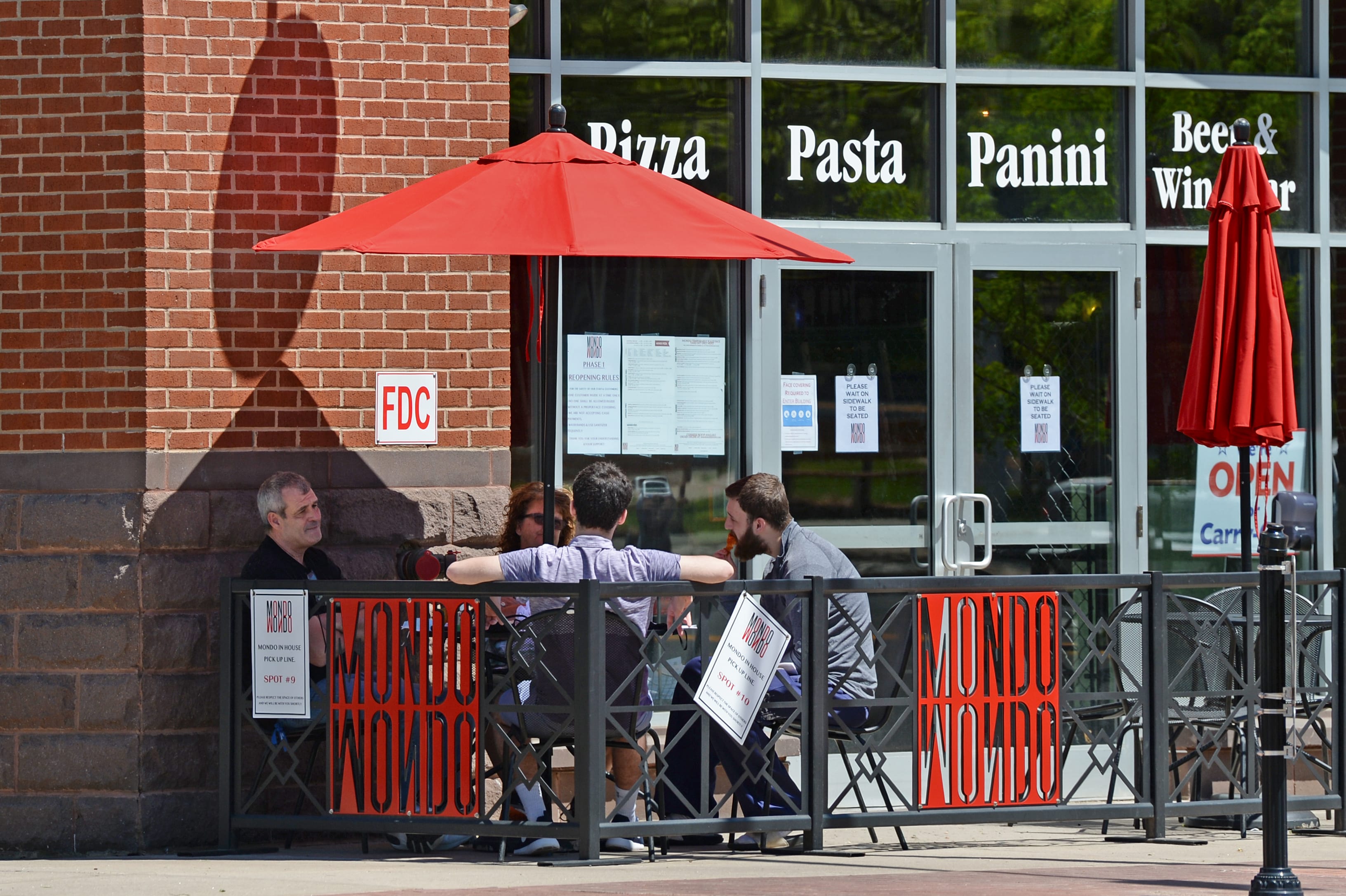 Diners on the patio of Mondo’s in Middletown on May 20, the first day restaurants were allowed to open for outdoor dining.

Gov. Ned Lamont, whose administration has been facing intense lobbying by the restaurant industry over COVID-19 restrictions, made a modest concession Friday by allowing indoor dining on June 17, three days ahead of the previously scheduled second phase of reopening on June 20.

Three days makes little difference in the life of a pandemic that has claimed 4,000 lives and roiled Connecticut’s economy since widespread closures ordered in mid-March to slow the spread of the novel coronavirus, but it gives restaurants a small lift approaching Father’s Day on June 21, Lamont said.

“The metrics are pretty good,” Lamont said, referring the rate of new COVID-19 cases and steady fall of hospitalizations. “A lot of the restaurants said give us a little more time to prepare for the coming weekend.”

More guidance on Phase 2 will be released in coming days, he said. Gyms and movie theaters are slated to reopen in Phase 2, and hotels will be allowed to resume booking guests for leisure travel after being limited to first-responders and essential business travel.

“But we’re in a different place today,” Lamont said. “Here we are in June. Summer is coming. It’s time to get our holiday season going, and we’re going to be able to slowly open up our hotels as well.”

The governor already has reconsidered a ban on graduation ceremonies. On Wednesday, Lamont said that that graduations could begin July 6, following certain guidelines: They must be held outdoors, limit attendance to 150 graduates and guests, and maintain social distancing protocols.

The restaurant order Friday puts Connecticut ahead of some nearby states in allowing indoor dining. Outdoor dining has been allowed since May 20, the first of four expected phases in loosening restrictions that has limited commerce, closed schools and generally limited gatherings to no more than five people.

“We worked very closely with the restaurant association,” he said.

Scott Dolch of the Connecticut Restaurant Association reacted with restraint, noting the association had been lobbying to begin indoor dining this week under conditions that would limit capacity and maintain social distancing.

“At the same time, this date will thankfully put us ahead of neighboring Massachusetts and New York in this regard,” Dolch said in a statement. “Given that Connecticut restaurants make up ten percent of our state economy, it’s critical that we not fall behind regionally and every day counts.” 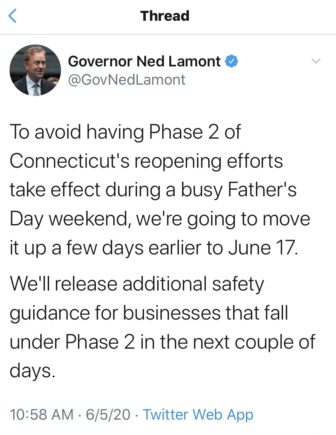 The governor made the announcement on Twitter Friday morning,

Dolch said no one knows what will be the long-term damage on restaurants, the segment of the economy hardest hit by the closures and one of the biggest sources of the COVID-related unemployment.

“What we do know is that throughout this entire process, Governor Lamont and his administration have remained responsive and open to our calls, even when we’ve disagreed,” he said. “We appreciate their open door, and we thank the governor for providing clarity on this timeline. Connecticut restaurants are ready for this next step.”

“I think customers are slowly getting back, feeling confident,” Lamont said, adding that all the restaurants he’s visited have taken the safety protocols seriously.

Bars still will be closed as of June 17 but Lamont’s accelerated plan will also permit museums, zoos, amusement parks, sports clubs, libraries and some youth sport programs to resume operations.

The governor said state health officials are continuing to monitor whether all the large demonstrations in recent days could produce another surge in COVID-19 infection rates. Experts across the U.S. have warned that the massive protests triggered by the police killing of George Floyd in Minneapolis could lead to significant increases in coronavirus infections.

“But as long as COVID hospitalizations and infection rates remain low, we will be in a very good position for a June 17 Phase 2,” Lamont said.

A state report released Friday showed that Connecticut’s COVID-19 fatalities now number at least 4,038, an increase of 31 virus-related deaths in the previous 24 hours. People hospitalized for the potentially deadly virus dropped by 23, bringing the total hospital cases down to 350, continuing a weeks-long decline in COVID-19 hospitalizations.

The number of Connecticut residents tested for the disease increased by 5,857, 221 of them positive, since Thursday, bringing the total tested since the start of the pandemic to 285,314. The total number of known positive cases in Connecticut is now 43,460.

According to statistics compiled by Johns Hopkins University, Fairfield County ranks 10th in the nation for the number of confirmed or probable COVID-19 related deaths, with 1,293.

Hartford County ranks 11th in the U.S. for coronavirus fatalities, with 1,266, and New Haven County sits at 16th in the nation with 992 deaths from the virus. The county with the highest number of recorded COVID-19 deaths in the nation was Kings County in New York with 5,160 fatalities, according to the Johns Hopkins report.

On the list of counties in the U.S. with the highest number of confirmed coronavirus cases, Fairfield County ranked 22nd with 15,843, New Haven County came in at 29th with 11,582, and Hartford County was 34th in the nation with 10,636 cases.

The U.S. county with the highest number of COVID-19 infections was Cook County, in Illinois, with 80,713.

Fatalities in the state have been heaviest at nursing homes, where visits have been banned for months. Lamont said that ban will continue while the state explores other ways to provide family contact.

“We’re talking about that right now, trying to find some way we can augment what we do with FaceTime, maybe something outside, maybe one visitor a family over a limited period of time, get them tested, being able to go in,” Lamont said. “We’re going to be able to make some progress on that, I hope soon.”

For the latest guidance on what is open in Connecticut, click here.

Correction: As originally posted, this story incorrectly said graduations would be allowed June 6, not July 6.