Viewing pandemic, recession and protest through a ‘time warp’ 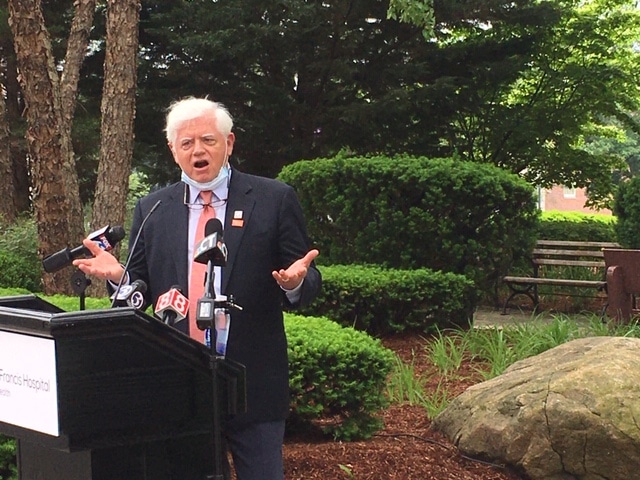 They come every year to the same place, an urban hospital that treats gun trauma and, in 2020, tests for a novel coronavirus. It sits in a census tract where 90% of the residents are black or Hispanic, 40% live in poverty and 15% of the apartments are vacant.

A doctor introduces the speakers, the politicians and mothers of dead children come to mark National Gun Violence Awareness Day. It fell this year on the 52nd anniversary of the assassination of Robert F. Kennedy as he celebrated a presidential primary win.

They pledge to remember the dead, to make changes for the living. They did so last year, and most likely will do so the next. It’s what they did Friday, standing outside Saint Francis Hospital and Medical Center on Asylum Hill in Hartford.

“The trauma team from Saint Francis vows today to continue to stand with all of you that are affected by this scourge and to add our hopes to yours that one day this scourge will be a footnote to history,” said Dr. Stephanie Montgomery, a trauma surgeon.

Congressman John B. Larson was there, also thinking about history — the Spanish influenza pandemic, the Great Depression and civil unrest.

He was a 19-year-old aspiring history teacher at Central Connecticut State University in the spring of 1968, when Martin Luther King Jr. was martyred in Memphis, cities burned and America promised change. Larson turns 72 next month, less confident of change.

Congress debated about gun control, civil rights and poverty in 1968, moved by the deaths of King and Kennedy. On the best seller list was the Report of the National Advisory Commission on Civil Disorder, a 424-page dissection of the riots that raged through U.S. cities, beginning with Watts in 1965.

Produced by a commission led by Otto Kerner, the governor of Illinois, it was published on Feb. 29, 1968. King pronounced the report a “physician’s warning of approaching death, with a prescription for life.”

The commission looked deeply into the causes of the riots, past facile complaints that agitators and the media had fanned the flames. The commission said the causes were pernicious racism, wrenching poverty and inequality in housing, schools and opportunity.

“This is our basic conclusion,” the commission famously wrote. “Our nation is moving toward two societies, one black, one white–separate and unequal.”

King was dead six weeks later.  The report was largely ignored by the Democrat who commissioned the report, Lyndon B. Johnson, and the Republican who succeeded him, Richard M. Nixon.

It is getting a second look today in the wake of civil unrest provoked by the police killing of a handcuffed black man, George Floyd, arrested on suspicion of passing a counterfeit $20 bill. U.S. Sen. Richard Blumenthal said the Kerner Report remains startlingly relevant, with riffs on police accountability and warnings against false choices.

Kerner insisted the choice before America in 1968 was not between “blind repression or capitulation to lawlessness.”

“It is the realization of common opportunities for all within a single society,” Kerner wrote. “This alternative will require a commitment to national action–compassionate, massive and sustained, backed by the resources of the most powerful and the richest nation on this earth. From every American it will require new attitudes, new understanding, and, above all, new will.”

No one expects compassionate, massive and sustained action from Washington. Congress is bitterly divided and the president sees the current pandemic, economic depression and civil unrest through a unique lens, primarily as unfair reflections on him in an election year.

Gov. Ned Lamont, a wealthy Greenwich Democrat in his second year as governor, consumed over the past 10 weeks by the COVID-19 pandemic, has expressed empathy and solidarity with the near-daily protests since America watched the video of Floyd struggling for breath and crying for his mother before falling forever silent.

But neither the governor nor a majority of the General Assembly have shown an appetite for tackling poverty and inequality, momentous tasks that require the expenditure of capital, both fiscal and political. Modern-day Connecticut is shaped by segregation, with well-documented measures of gaps in income and educational achievement.

In 2018, the House of Representatives barely passed a watered-down version of an affordable-housing bill sought by Gov. Dannel P. Malloy to push two dozen Connecticut communities to end their prohibition on multi-family housing. Before the partisan vote, the bill was stripped of financial penalties for violators: the loss of discretionary state aid.

During the 2018 campaign for governor, neither Lamont nor his opponents expressed a willingness to take on the issue.

Lamont’s initial response to the Floyd death is to call for greater funding for police body cameras. 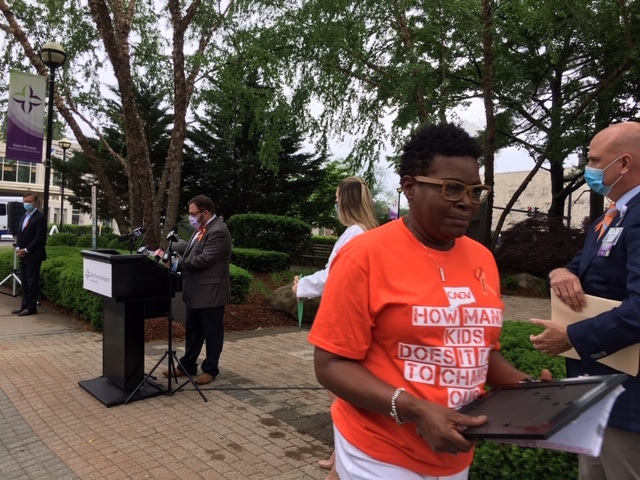 Janet Rice of Connecticut Against Gun Violence  steps away from the microphone with a picture of her son Shane, a victim of gun violence.

On Friday, Deborah Davis of Mothers Against Gun Violence, who was a guest of U.S. Sen. Chris Murphy at the State of the Union address this year,  told the assemblage outside Saint Francis that America needs to see urban gun violence as a public health crisis, but also a symptom of a chronic ill, racism.

“I stand here to challenge you to present yourselves as part of the solution and not to stand by idly and not to look so oblivious when you see that there is racism in our community, when you see there a certain difference in the ways individuals are treated when they do get health care,” Davis said.

“Our legacy of discrimination and racism in this country leads us to this moment today, where black Americans are 10 times more likely to die from a gun,” Murphy said. “These are the same debates together, and as we start to seek and achieve justice for African Americans in this country I’m going to tell you that will result in a diminution of the daily threat that hangs over black Americans like a sword — that is the threat of gun violence.”

Murphy said research shows that growing up in a violent environment begets more violence and acknowledged Janet Rice of Connecticut Against Gun Violence, whose son, Shane, was shot to death in an argument over a girl 10 years ago.

“Shane was the victim of gun violence before he was shot,” Murphy said.

Larson said a bill requiring universal background checks for gun purchases is one of 475 measures sent by a Democratic House to a Republican Senate. In his public remarks, he railed against Senate Majority Leader Mitch McConnell, but he later acknowledged that everyone deserves a measure of blame.

Correction: Janet Rice was incorrectly identified in this story as originally posted.