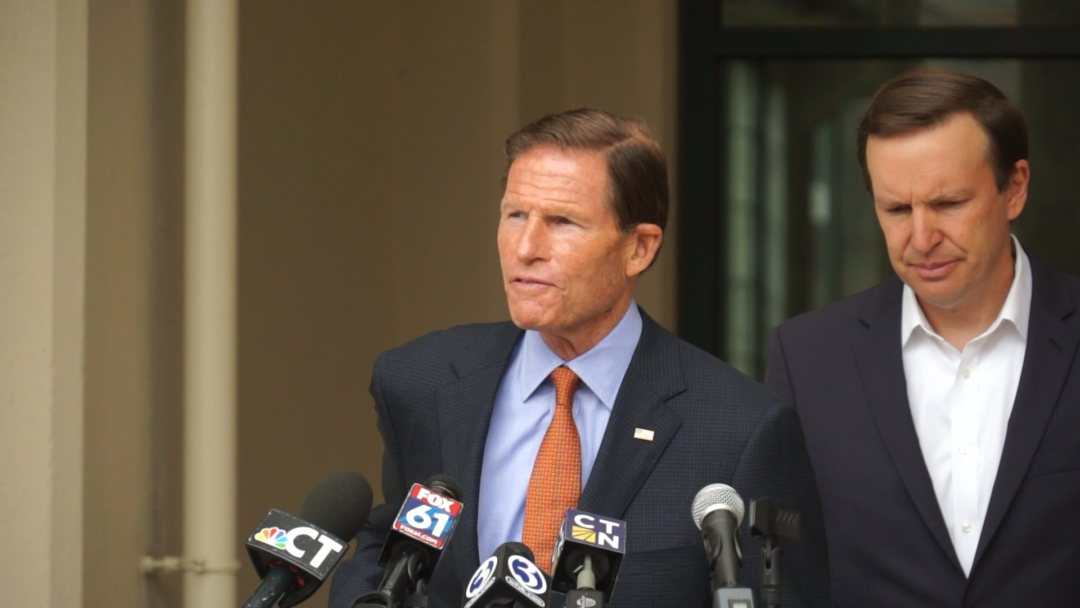 Sens. Richard Blumenthal and Chris Murphy are among the lawmakers who plan to press for legislation this week that would respond to George Floyd’s death.

Washington – Prodded by a national uproar over police brutality, lawmakers – including Connecticut Sens. Richard Blumenthal and Chris Murphy – plan to introduce a series of police reform bills this week.

Some of the more ambitious legislation may face pushback by congressional Republicans who also want to take action but prefer a more “hands off” approach. But there is bipartisan consensus that Congress needs to act.

Drafted by the Rep. Karen Bass, D-Calif.,  who chairs the Congressional Black Caucus, Rep. Jerrold Nadler, D-N.Y., chairman of the House Judiciary Committee, and Sens. Cory Booker, D-N.Y. and Kamala D. Harris, D-Calif.  a bill slated to be introduced on Monday aims to address the excessive use of police force by curbing “qualified immunity.”

That’s a legal doctrine that shields police officers and other government officials from being sued for actions performed within their official capacity, unless those actions violate the law or someone’s constitutional rights.

To provide greater transparency of police  behavior, the bill would grant subpoena power to the Justice Department to conduct “pattern and practice” investigations of potential misconduct and help states conduct independent investigations.

That bill, called the Justice in Policing Act of 2020, and other legislation that will be unveiled this week, would mark the first federal effort to overhaul policing spurred by a string of police-involved killings of black men and women, including the choking death last month of George Floyd in Minneapolis.

“Let’s take this moment to be an inflection point, a pivotal one, that we are going to not just proceed incrementally but in a very strong way to do things differently,” Pelosi said.

The furor over Floyd’s killing and the issue of racial injustice has prompted Republicans to say they want reforms, too.

House Minority Leader Kevin McCarthy, R-Calif., said he believes Democrats and Republicans can find “common ground,” such as tying federal funds to better police training and ensuring that bad officers can be removed.

“I believe this is a moment for us,” McCarthy said. “I hope that, in this moment in time, Congress rises to the occasion. Because I will tell you, from the (lawmakers) that I have talked to on both sides of the aisle, there’s a great desire to do that.”

But what steps Congress will ultimately take – or can take – are unclear. John DeCarlo, a professor of criminal justice at the University of New Haven and a former Branford police chief, said most of the nation’s 700,000 police officers work for towns, cities and counties and are out of reach of the federal government.

But Congress can set standards for training and establish a certification database, he said. The United States could also follow Great Britain’s lead and establish a national office of policing, DeCarlo added.

Lawmakers asked congressional researchers to determine what they could do under the U.S. Constitution to police local cops and discovered that the options are limited.

“The U.S. Constitution established a federal government of limited powers,” said a report by the Congressional Research Service in response to their queries. “A general police power is not among them. That authority is largely reserved for the states.”

But the CRS report said Congress could use its power of the purse to “encourage states to take or refrain from various activities,” including implementing police reforms that include a better way to eliminate bad cops from a force.

While Congress’s powers are limited, the number of policing bills introduced since Floyd’s death last month is steadily increasing, and Pelosi has vowed to bring back the U.S. House to vote as soon as its package of policing reforms is ready for the floor, likely by the end of June.

The bill would also require every state, local and federal law enforcement agency to provide data to the Department of Justice on the use of deadly force by and against police officers, along with data on traffic and pedestrian stops, and to create a new task force to investigate and prosecute cases of law enforcement misconduct.

Blumenthal, meanwhile, is pressing for action on the Police Training and Independent Review Act.  The legislation, which Blumenthal said is modeled after state laws, would provide cities and states resources sources for training, screening of recruits and evaluation of police officers.

“The nation should take (Connecticut’s) protocols and widen them across the country,” Blumenthal said at a joint press conference with fellow senator Murphy in Hartford on Friday.

Blumenthal also said the legislation would establish an independent prosecutor to investigate cases of police wrongdoing.

Murphy and Sen. Chuck Schumer, D-N.Y., plan to introduce legislation this week that would require federal officers in uniform at demonstrations to have their agencies and names visibly marked. Murphy said President Donald Trump is “trying to intimidate peaceful protesters by having unidentified and unaccountable federal law enforcement officers assigned to the protests.

He also said the widespread anger Floyd’s death has ignited is understandable.

“The moment of reckoning is long overdue,” Murphy said. “African-Americans have been prosecuted and hunted down for decades and centuries in this country.”