Demand grows for lawmakers to act on police accountability reforms 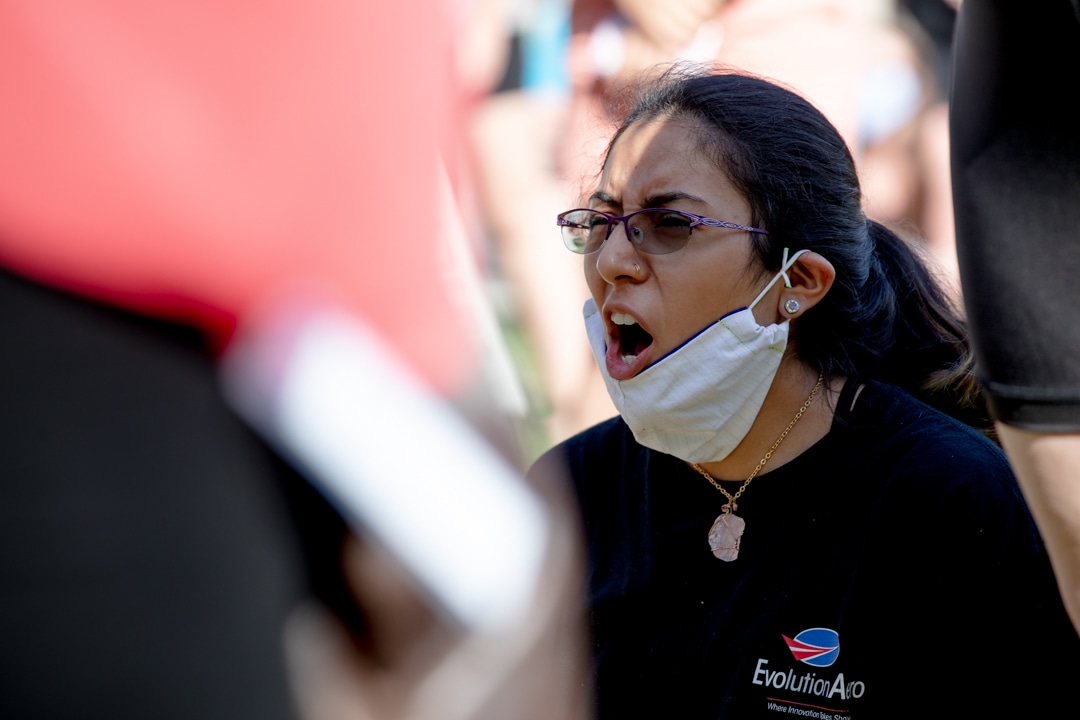 Nadia Vivar shouts out the names of people who were discriminated against because of their skin color on Monday at a protest on the Milford Green. “People in Milford came together because we care about … what is happening to our friends and family who are people of color,” said one of the organizers, Susan Roth. “We feel that we need to step up and help start the conversation in Milford.”

Connecticut lawmakers must quickly pass legislation to hold police more accountable for misconduct and make life safer for people of color across the state, a prominent lawmaker said Monday, and not wait until next year to pursue meaningful reforms.

“We have to change what policing is,” said Sen. Gary Winfield, D-New Haven, co-chair of the Judiciary Committee, told members of the Police Transparency and Accountability Task Force, a group charged with filing a report by the end of the year, during its Monday afternoon meeting.

Winfield said his goal is to pass a bill that is “as comprehensive as possible.” Though there is still not a special session date scheduled, Winfield said the legislature will move faster than the task force.

“You’re going to see people who are walking down your streets, down my streets, who are going to be walking to the Capitol, and they’re not going to accept that we’re going to come up with a report in January, that’s going to say ‘This is how we might be moving forward,'” Winfield said.

Winfield’s sense of urgency was shared by a group of faith leaders from across the state who convened on the steps of the state Capitol Monday morning to announce they will take part in a “sunrise to sunset fast for justice” until Gov. Ned Lamont and legislative leaders call a special session to pass comprehensive police reform legislation.

The social justice and civil rights coalition — called Moral Monday CT — is led by Bishop John Selders, who called on fellow religious leaders to participate in the fast to draw attention to ongoing racial injustices in Connecticut and across the country. 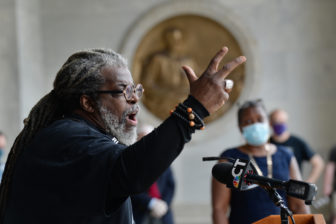 Bishop John Selders, co-founder of Moral Monday CT, speaks to a large gathering of protestors at the state Capitol last month in response to the killing of George Floyd in Minneapolis at the hands of police on Memorial Day.

“We believe the time is now for us to call for total, total reformation and, in fact, I’m going to talk kind of crazy, I think I want to abolish the police,” Selders said. “Let’s tear it down and start over again.”About 20 faith leaders will take part in the fast, said the Rev. Steven Jungkeit, senior minister at the First Congregational Church of Old Lyme.

“It has to do with police violence, but it also has to do with other forms of racial violence as well,” Jungkeit said.  “Oftentimes those take form in our housing policies, our education policies, our understanding of health care. There needs to be a top-town effort to address all of those injustices.”

Whether the legislature is prepared to deal with these issues before it reconvenes next year remains to be seen, however. The governor’s chief of staff said Monday the date for a special session won’t be set until the legislature and governor’s office agree on a bill.

The Police Transparency and Accountability Task Force has met three times since it was created in a police accountability bill during the 2019 legislative session. Monday’s meeting came after almost two weeks since the onset of demonstrations across the state and country in response to the death of George Floyd, who was killed by a Minneapolis police officer on May 25. Daryl McGraw, the group’s chairman, disabused his colleagues of the notion that change isn’t needed in Connecticut.

“Let’s be clear. We do have problems. We do have police brutality issues. We do have racism issues within police departments and within our state,” McGraw said. “We don’t need to wait until a George Floyd situation happens before we act accordingly.”

McGraw asked the task force members — an array of career law enforcement officials, attorneys and academics who study the criminal justice system — to identify problems in Connecticut and to propose potential solutions. 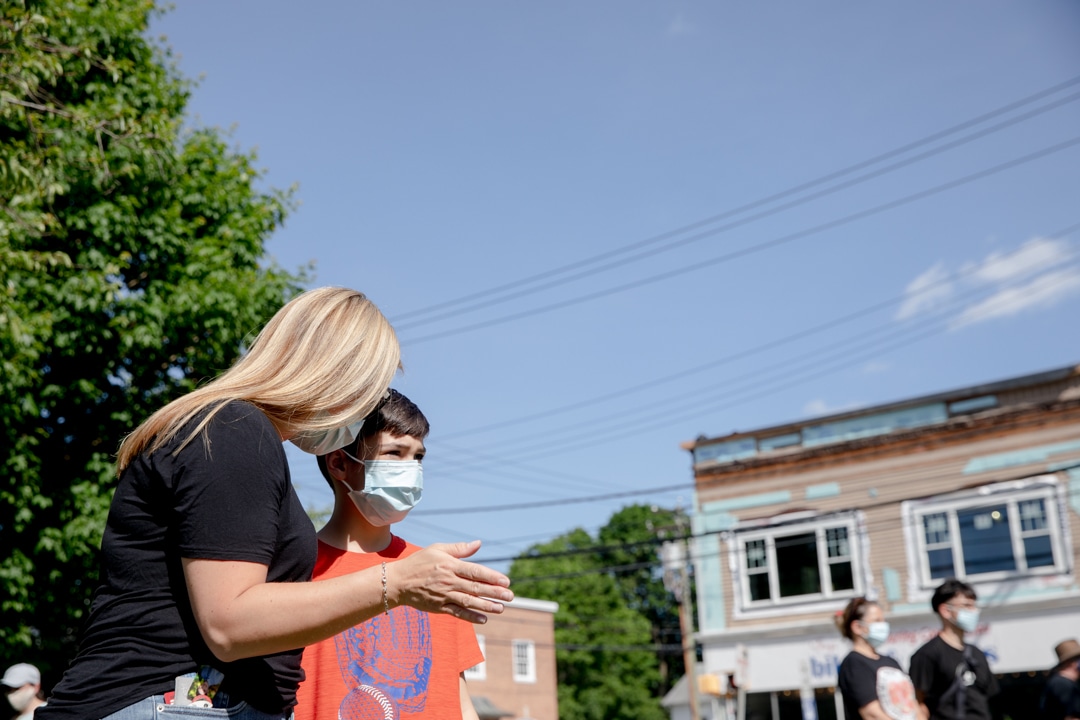 Dani Nichols, left, explains to her son, Jackson, 10, what the speaker says about police abuse of power at Monday’s protest on the Milford Green. “This is history we’re making and I wanted him to be a part of it,” Nichols said. “It’s been going on so long and things really need to change.”

“Internal affairs needs to go by the wayside, alright, we can’t let police investigate police,” Szewczyk said. “You often go to the academy with these police officers that you’re then investigating four or five years later.”

Lamont also attended the meeting, which was held via a Zoom call. He encouraged the task force to conduct public input sessions and move quickly to get a set of recommendations into lawmakers’ hands. The legislature is ready to get moving, Lamont said, and the bill would likely be a lot stronger if the commission could give them its suggestions.

“Given what’s happened in the last two weeks, I think we realized how important this commission is. And we got, I think, let’s say distracted by COVID,” Lamont said. “But there’s no excuse for us to be distracted any longer.”

Others spoke of the need to change police culture in order for reforms to affect systemic change. Ken Barone, project manager with the Institute for Municipal and Regional Policy at Central Connecticut State University who oversees an annual analysis of racial disparities in traffic stops, said the Police Chiefs’ Association usually dismisses their report. That changed with the analysis the institute released last month, Barone said.

“Just a few years ago in the state of Connecticut, we couldn’t even get agreement on whether or not disparities exist, not what to do about them,” Barone said. The lack of consensus on racial disparities’ existence, Barone continued, underscores the need to change the culture of policing and for that change to permeate through departments across Connecticut.

“I think anything we do needs to focus on that first and foremost because everything else will be meaningless if at the end of the day the culture of policing is the same as it was a month ago,” Barone said. 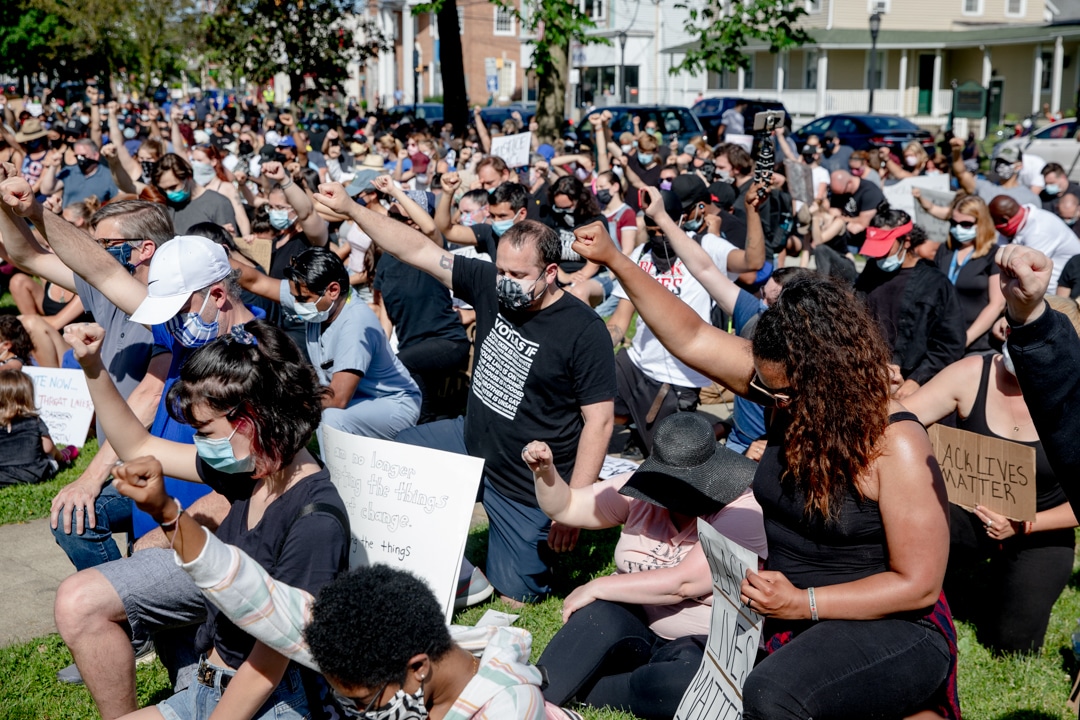 Protestors kneel in silence for 8 minutes and 46 seconds to honor George Floyd on Monday in Milford. The crowd kneeled for the amount of time a Minneapolis police officer charged in the killing of George Floyd kept his knee on Floyd’s neck.

Rejecting the idea that police are best positioned to determine what reforms are needed, Rep. Joshua Hall, D-Hartford, said community members’ suggestions must be heard and considered as lawmakers, and the task force, shape future legislation.

“The responsibility of police officers is to serve and protect the public,” Hall said. “So, from my perspective, it’s the public who should determine how they wish to be served and protected.”

A second discussion about police accountability took place later in the day during a Monday night forum on Facebook, during which the governor and the legislature’s Black and Puerto Rican caucus initially focused more on the impact of the COVID-19 pandemic on minority communities than the death of George Floyd.

But the governor asked in his opening remarks for help in recruiting persons of color for openings in the judiciary and law enforcement, repeating his oft-stated goal of assembling a government that looks like all of its residents.

“I need your help in recruiting people in law enforcement. recruiting judges,” Lamont said. Referring to the video of Floyd’s arrest, he said, “What struck me about that picture was there was a black man being murdered, and there was not one black cop I could see in the picture.”

Lamont currently has judicial vacancies to fill, including one on the Supreme Court.

“Our judge pool is pretty white, and in particular, a real shocking shortage of Hispanics, especially in appeals court and Supreme Court. I’ve got to start building that bench,” Lamont said.

The governor can make judicial nominations only from a pool of candidates who have been approved by the state Judicial Selection Commission for one of three levels of courts in the state with appointed jurists: the Superior Court, Appellate Court and Supreme Court. The paucity of Hispanic candidates is not new.

Tong said the state must explore whether it is too hard to fire a police officer who commits misconduct.

“These are not easy questions. I get it,” Tong said. “And I think some of these are third-rail issues, but we’ve got to touch it.”

Blumenthal said the state and Congress must explore systemic racism in all sectors of society.

“We need to broaden the lens,” he said.