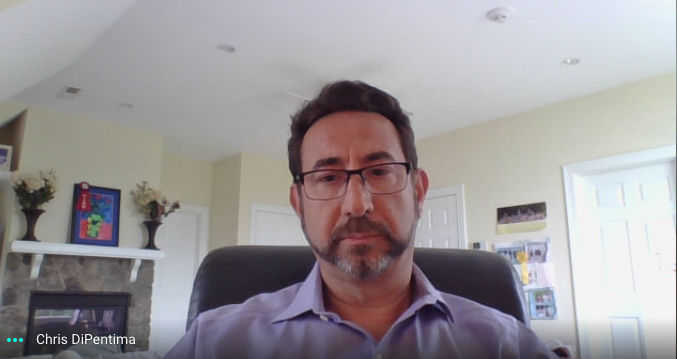 Chris DiPentima, who was named Thursday as the next CEO of CBIA, on a video conference call.

The new president and chief executive of the Connecticut Business and Industry Association is coming from the ranks of its members: Chris DiPentima is a senior executive in aerospace manufacturing, a key sector in the state economy.

“That is a different perspective coming into the CEO role, which is a nice perspective to have — kind of the voice of the customer,” DiPentima said.

DiPentima, 48, of Durham was formally named Thursday to succeed Joe Brennan as the leader of CBIA, the state’s oldest and largest business trade group. Brennan, who has worked for the association 32 years and led it since 2014, is retiring on Aug. 1.

CBIA typically has hired government affairs professionals from within its ranks, but Brennan noted that DiPentima has been involved in public policy as a member of various industry groups, including a recent term as chair of the association’s board of directors.

“It’s a change, no question about that. But I don’t think people should read too much into it,” Brennan said. “He’s been involved a long time.”

Over a year ago, the board raised the idea of hiring a business executive instead of a government affairs specialist, and DiPentima spanned both worlds to a degree, Brennan said.

A profit center for the trade group has been its health insurance affiliate, CBIA Health Connections. But that business has grown more complicated since the passage of the Affordable Care Act.

CBIA merged two years ago years with CONNSTEP, a consulting firm that offered strategic consulting services. Earlier this year, it partnered with At-Bay to provide cyber insurance for small businesses.

DiPentima said he broached the idea of seeking the job as his term as chair was nearing an end in December, and he recused himself from any board discussions about the search for a successor to Brennan.

“The CBIA board of directors conducted an extensive, statewide search for our organization’s next leader, with the search process showcasing an impressive number of highly qualified candidates,” Jennifer DelMonico, who succeeded DiPentima as the CBIA’s board chair, said in a statement. “Chris DiPentima stood out for his many private sector successes, his demonstrated leadership skills, his commitment to Connecticut, and his thoughtful, strategic vision for CBIA.”

Brennan and DiPentima spoke to CT Mirror in a video conference call after the CBIA board approved DiPentima’s appointment.

DiPentima is a graduate of Boston College and the Quinnipiac University School of Law. He left a trial law practice to join Pegasus Manufacturing of Middletown in 2002. He was named president of what was then a family-owned company in 2006.

He currently is a division president of Leggett & Platt Aerospace, which includes Pegasus Manufacturing.

CBIA long has been considered an important voice at the State Capitol, though its larger members have their own government affairs operations, and the group’s direct involvement in electoral politics has been uneven.

In 2016, CBIA made its first major foray into the world of independent expenditures with a $400,000 campaign aimed at helping Republicans win a majority in the Connecticut Senate and narrow the Democratic majority in the House.

Facing complaints from Democrats and technical issues about how to fund independent expenditures, the association made no similar effort in 2018.

“I would love it if we could do independent expenditures again,” Brennan said. “It was just ruled we would have to do it in a different way than we did the first time around, so we are continuing to explore how we can be more effective on the political end. So, the appointment of Chris doesn’t really affect that one way or the other.”