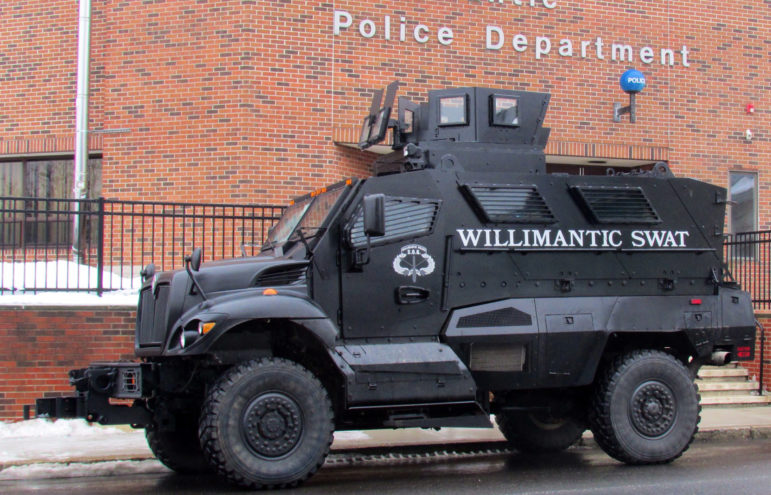 The Willimantic Police Department’s SWAT vehicle given to the town in 2013 by the Department of Defense through the 1033 program.

In April, the Bridgeport Police Department received from the Pentagon a heavily armored mine-resistant vehicle valued at more than $705,000. It is part of a long-standing program that critics charge has ‘militarized’ state and local police departments and contributed to an increase in violence in law enforcement.

The armored vehicle Bridgeport received is only one recent example of the $20 million worth of military hardware delivered to Connecticut police under the Pentagon’s controversial 1033 program. The program donates excess war-fighting gear to police across the nation –including assault-style weapons, helicopters, night vision goggles, and anti-riot gear.

The departments receiving the hardware say it bolsters their ability to fight crime, carry out dangerous rescue missions and protect their officers.

Hundreds of military rifles have also been distributed to city and town police departments across the state, including Danbury, East Windsor, Fairfield, Farmington, Ledyard, Middletown and Ridgefield. Some of those weapons, once front-line firearms in the U.S. Army, also went to Eastern Connecticut State University and Southern Connecticut State University police. Putnam police received eight “riot type” 12-gauge shotguns and similar weaponry went to various other departments in the state.

In a statement, the Bridgeport Police Department said its new mine-resistant vehicle and two armored Humvees the force also obtained through the 1033 program, are “rescue vehicles” that could be deployed in emergencies. Those include saving people in the grips of a natural disaster, dealing with barricaded suspects and in “high-risk warrant service,” hostage rescues and police rescues, the department said.

Critics of the military surplus program

Calls for police reforms following the killing of George Floyd by a Minneapolis police officer have put this surplus military hardware program under scrutiny. Images of helmeted and armored police armed with shields, batons, tear gas and other riot gear — not to mention of similarly dressed and armed lines of national guardsmen and federal officers in Washington, D.C. — have fueled public concerns about militarized law enforcement.

Critics cite academic studies, including one from Harvard’s Kennedy School of Government, that found participation in the 1033 program appeared to cause to an increase in violence and killings by participating police departments.

Congress is moving to curb the give-away of military-grade equipment.

The “Justice in Policing Act” introduced by congressional Democrats this week would limit these military transfers and add oversight and transparency to the 1033 program, requiring law enforcement agencies to have training, and give community notice before participating in the program. And Sen. Brian Schatz, D-Hawaii, is trying to include an end to the program in the next National Defense Authorization Act, a massive defense bill that authorizes spending for all of the Pentagon’s programs.

The 1033 Program was established by an National Defense Authorization Act approved in 1997 and initially approved only for counter-terrorism forces. However, it was eventually expanded to include any law enforcement activity.

President Barack Obama scaled back the initiative in 2015 amid controversy over the police response to protests the previous year following an officer’s fatal shooting of Michael Brown in Ferguson, Missouri. But President Donald Trump reinstated the full program in August of 2017.

Lawlor said there is no need for local or state police to have military-style combat and riot equipment and that their use by police often triggers or escalates violence. He said use of such equipment has an impact both on the public’s perception of police and the perception police officers have of themselves.

“Putting this kind of military equipment in the hands of local police only escalates an already very tense situation and leads to violence,” Lawlor said. “When you show up with riot gear, armored vehicles and helicopters… you’re just asking for violence. It’s going to happen.”

He said state and local police in Connecticut refrained from using military hardware in response to recent demonstrations over Floyd’s death and he believes the restrained police approach was one reason why there has been so little violence connected with the protests here.

Lawlor doubts Congress will pass any ban on the transfer of surplus military gear to local police and thinks Connecticut’s General Assembly should act.

“If the Connecticut legislature is coming in for a special session, there is no reason why state lawmakers couldn’t ban the importation of this kind of equipment,” Lawlor said.

‘An asset for law enforcement’

Morello said the vehicle isn’t intended for things like quelling protests and that the equipment is needed “for a variety of reasons.”

“We need armor protection when responding to an active shooter” or other situations that might put officers or citizens in grave danger, Morello said. It is also useful to rescue people in disasters like blizzards or floods, he said.

Morello said Bristol couldn’t afford to purchase a civilian version of that armored vehicle, which as surplus military equipment is listed as costing more than $65,000, and that the military transfer program should continue.  “Because we can’t afford it, does that mean officers must go in harm’s way?” Morello asked.

Meanwhile, police in the small eastern Connecticut town of Ledyard received 23 military-style semi-automatic rifles from the Pentagon, one for each member of its department.

Chief John Rich, a former member of the Connecticut State Police, said the rifles are similar to civilian police rifles used by many departments across the country and that Ledyard has since purchased its own police rifles to equip its officers.

“I think this program has generally been an asset for law enforcement,” Rich said. He said that other military equipment his small department has received, such as night-vision goggles and high-powered scopes, can be useful in certain situations where there is a chance officers might be in danger.

But Rich added: “I don’t think it would be terribly detrimental to us if that resource wasn’t available.”