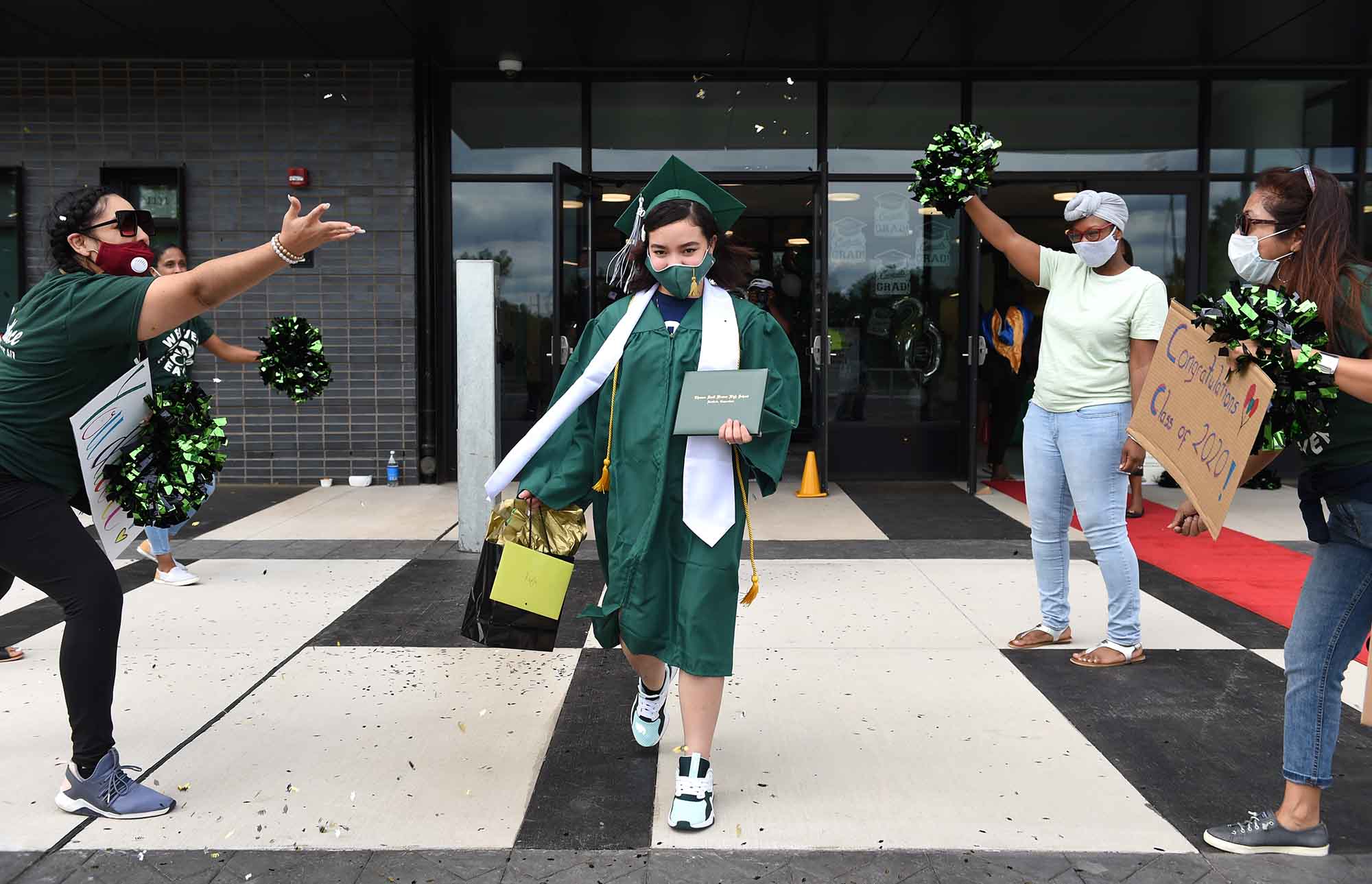 Many are happening this month, while others are being delayed as late as August. Graduation plans are getting approved not just by school administrators but also by health experts and local government officials worried about public safety during the COVID-19 pandemic.

Canton High School’s 113 new graduates celebrated in two different car parades: one for students and their families and another by high school staffers.

In Danbury, the 772 students did get their diplomas in person, but it was done over three days at an outdoor venue at an estimated rate of 45 students per hour.

Platt High School students in Meriden attended their graduation in split shifts, with half getting diplomas on the new athletic field one day last week in the morning and the other half in the afternoon.

In Manchester, high school graduates had to make appointments starting on Monday and running through Saturday. Each student could have up to four people accompany him or her, walking through tents to hear pre-recorded messages and ending up on a stage where a family member or friend could hand out the actual diploma.

“I think there’s an understanding,” Jim Farrell, spokesman for the Manchester Public School District, said of the attitude of graduates and their families about the need to do things very differently in a time of pandemic. “We involved the community in our planning,” Farrell said.

On Tuesday, a two-mile-long car parade was to take students and their families to Manchester High School where they would be greeted by teachers and staff members carefully spaced apart for social distancing.

“It’s a sort of communal, emotional sort of thing,” Farrell explained. “There’ll be a lot of whooping and hollering.”

Gio Martinez is a 17-year-old graduating senior at Manchester High School who was out decorating his car Tuesday afternoon for the motorized graduation parade. “You have to take it with a grain of salt,” Martinez said of the very non-traditional ceremonies in this pandemic year.

“This isn’t ideal, this wasn’t what I expected, but the real world isn’t ideal either,” Martinez said. “I feel Manchester High School has prepared me for change.”

Martinez said his parents “are a little bummed,” mainly because they won’t be able to fly Martinez’s 80-year-old grandmother up from North Carolina for his graduation because of worries about COVID-19.

As for his classmates, Martinez said, “It’s kind of a mixed bag. Some are very upset but others say they like this better than sitting in a boring auditorium.”

At Norwalk High School, officials are still working on plans for a graduation ceremony in August at the parking lot of the city’s Shady Beach where pre-recorded speeches of congratulation will be shown on a big screen.

“Everything has to be approved by our local health director and the city,” explained Lynne Moore, assistant principle at Norwalk High School.

Moore said the response from students and parents to these plans for a most unusual graduation is “more disappointment than complaint” and a recognition of the need for such precautions “when we’ve had so many deaths in our country and our state.”