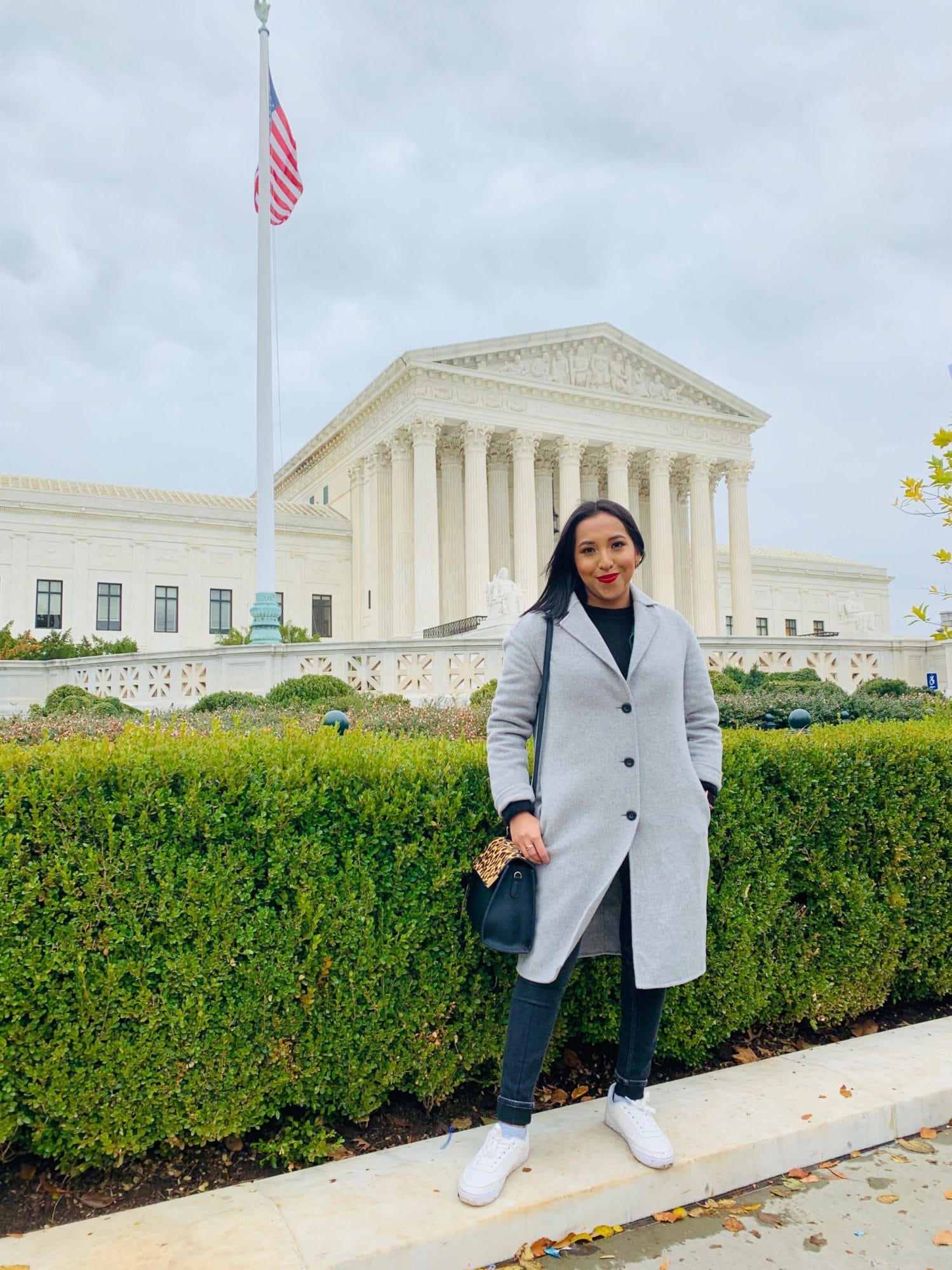 ‘Dreamer’ Joseline Tlacomulco of New Haven standing in front of the Supreme Court, which ruled that the Trump administration can’t end the program that shields her, and hundreds of thousands of other immigrant youth, from deportation.

Washington  — Saying the move would be “arbitrary and capricious,” the U.S. Supreme Court ruled Thursday that the Trump administration cannot shut down a program that has allowed nearly 800,000 young immigrants known as “Dreamers,” –about 10,000 of them in Connecticut — to avoid deportation and live and work in the United States.

The legal defeat for President Donald Trump on the issue of immigration, a major focus of the president’s domestic agenda, was hailed by immigrant youth who have benefited from the Deferred Action for Childhood Arrivals program. But they also said more has to be done to protect the nation’s immigrants.

“It gives me some sort of relief, but there’s still uncertainty,” said Joseline Tlacomulco, of the high court’s decision. “There are still a lot of people who are excluded from the program.”

Tlacomulco emigrated from Mexico with her parents when she was 8 months old and is a student at the University of Connecticut.

Like many of Connecticut’s Dreamers, Tlacomulco applied for DACA protections in 2012, when former President Barack Obama authorized the program for qualified young immigrants who had been brought illegally to the country.

While the program does not provide a direct path to citizenship, it shields them from deportation and allows them to study and work. The temporary protected status lasts for two years and can be renewed.

But in 2017, the Trump administration said the DACA program was unlawful and tried to phase it out.

Lower courts blocked an end to the program, so Tlacomulco and others were allowed to continue their two-year renewals. But others immigrant youth were prevented from applying.

Meghann LaFountain, chairman of the Connecticut chapter of the American Immigration Lawyers Association, said she has a list of young immigrants who had been blocked from DACA but may now be able to apply for the program’s protections.

“This is a very big win for immigrants,” LaFountain said.

But LaFountain and other immigrant advocates said congressional action is needed to ensure qualifying immigrants who were brought to the United States as infants and children are protected from deportation.

“We know this is good news for now, but it isn’t the end of the fight,” said Camila Bortoletto, co-director of CT Students for a Dream.

Bortoletto, and her twin sister Carolina, were brought to the United States from Brazil as small children. Like  Tlacomulco, the Bortoletto’s  applied for DACA protections shortly after Obama implemented the program.

However, Camila Bortoletto called the DACA program a “Band Aid solution” to the immigration problem because it  fails to protect the nation’s immigrants from what she called “the attacks of the Trump administration.”

“It’s a relief that today’s Supreme Court decision ends some of this uncertainty and continues to protect Dreamers,” Murphy said. “But this is only a partial, temporary victory. The Trump administration has shown time and again its desire to attack immigrants, and it’s up to Congress to pass legislation that permanently protects Dreamers.”

Blumenthal called the ruling “a landmark legal victory that will prevent the immense heartbreak of draconian mass deportation.”

Camila Bortolleto and Angelica Idrovo at a Washington D.C. rally.

But he said it “can never erase the massive suffering caused by Trump’s cruel, illegal policies.”

“Today is a welcome reprieve,” Blumenthal said. “Dreamers need and deserve permanent status and a pathway to citizenship. Congress must act now and pass the Dream Act.”

Obama used his executive authority to protect Dreamers because Congress had failed to act on a comprehensive immigration bill and is still stymied by partisan differences on the issue.

The 5 to 4 decision by the Supreme Court was written by Chief Justice John G. Roberts Jr. and joined by the court’s four liberals.

Agreeing with the lower courts, Roberts said the administration did not follow procedures required by law, and did not properly weigh how ending the program would affect those who had come to rely on its protections against deportation.

President Donald Trump blasted the Supreme Court, calling it an adversary. The court this week also ruled to protect LGBTQ rights in the workplace.

“These horrible & politically charged decisions coming out of the Supreme Court are shotgun blasts into the face of people that are proud to call themselves Republicans or Conservatives. We need more Justices or we will lose our 2nd. Amendment & everything else. Vote Trump 2020!,” the president tweeted.

Rep. Joe Courtney, D-2nd District, said he was “relieved and excited” by what he called the court’s “unexpected decision” to protect the DACA program.

He said he saw the issue through the eyes of a constituent from Enfield, Shaquille Jessop, a former star football player at Enfield High School and “all American kid.”

“His future in eastern Connecticut was in jeopardy because of the Trump Administration’s challenge to DACA, and I know that the uncertainty posed by that challenge weighed heavily on him since he has no connections or family in Barbados where he was born, and left at the age of five,” Courtney said.

Studies have determined that most DACA recipients are employed and 45 percent are in school. Advocates recently told the Supreme Court that nearly 30,000 work in the health care industry, and their work was necessary to fighting the coronavirus pandemic.

“DACA has helped hundreds of thousands of young people finish school, get better playing jobs, provide a stable income for their families, and access health care — myself included,” said Camila  Bortolleto. “In the years since, I’ve seen those individuals build their lives in Connecticut and start dream careers as teachers, nurses, business owners.”

Rep. John Larson, D-1st District, said “Dreamers  are Americans. They grew up here and this is their home”.

“The Dreamers are a remarkable group of young people worthy of our protection, consistent with the values of our country. This Supreme Court decision is huge win for our economy, our legacy and our national decency,” he said.