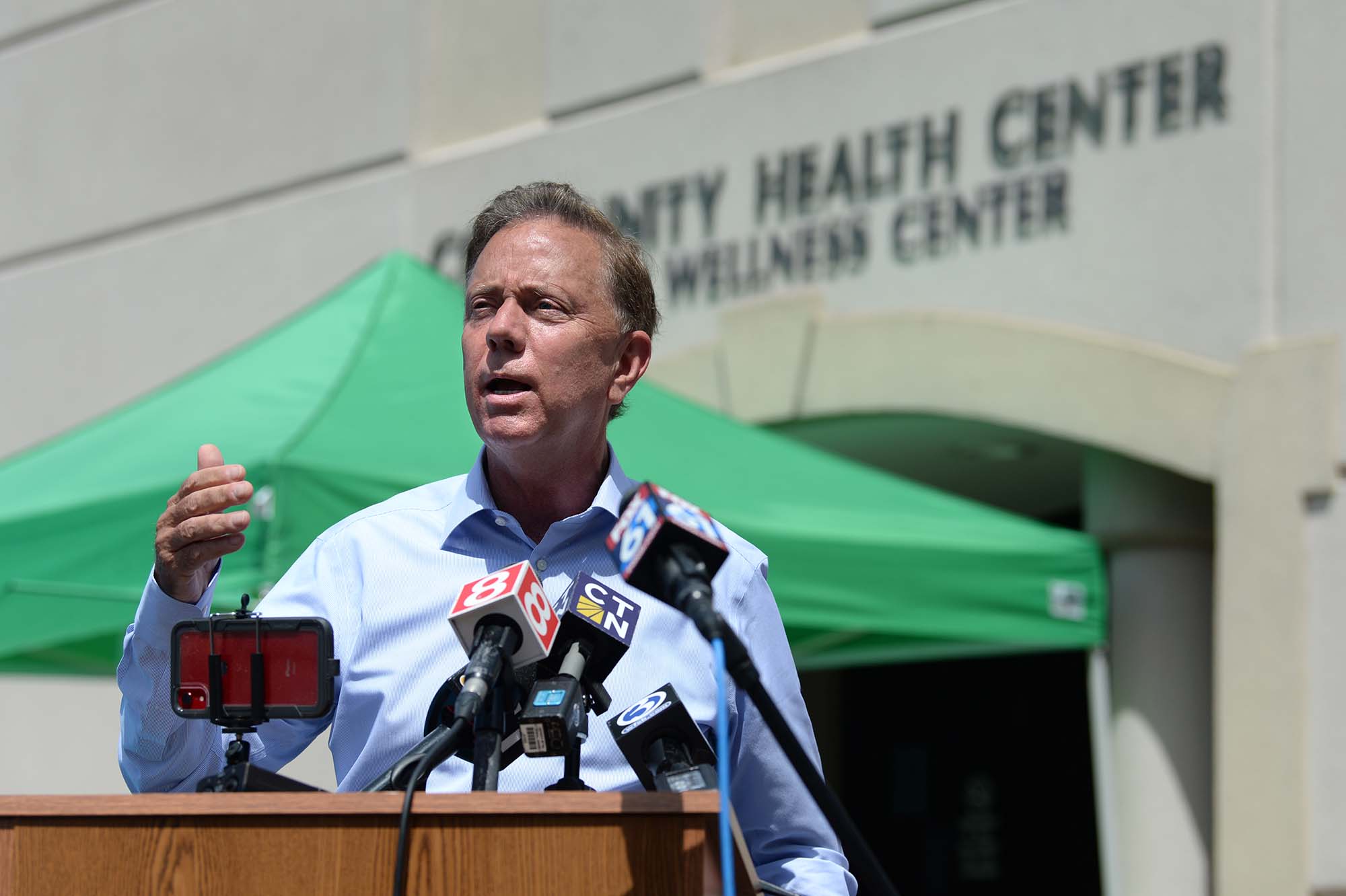 New Britain — Gov. Ned Lamont came out Thursday in favor of a Republican congressional plan to pay a one-time, $450 stipend to people who return to work rather than extending a federal program that provides $600-a-week in added jobless benefits.

“One of the ideas is we’ll pay you a stipend when you go back to work,” Lamont said at morning news conference in New Britain. “I think that makes a lot of sense.”

Earlier this week, Lamont said one reason for his objection to an extension of the $600-per-week added federal unemployment benefit is “sometimes it discourages work.”

Lamont’s support for the $450 return-to-work stipend being pushed by Congressional Republicans and the White House puts him at odds with Connecticut’s congressional delegation. All of the state’s House members recently voted in favor of extending the $600 unemployment add-on through January. 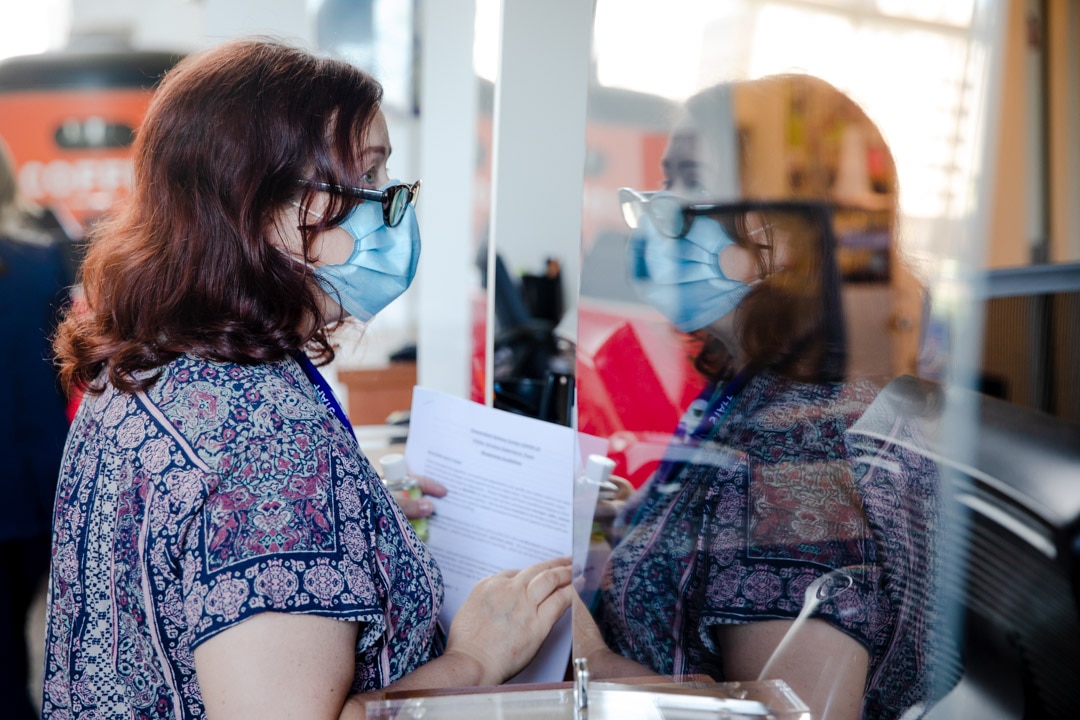 Eva Cintron, visitor services manager, goes through safety and health protocols with the staff on Thursday at the Connecticut Science Center. Each staff member received a personal protective equipment bag that included a hand sanitizer and mask.

But Lamont suggested that, instead of the federal government continuing the $600-a-week unemployment assistance, Congress send that money to the states as grants, rather than loans, to bolster state unemployment compensation funds.

“That would allow us to keep unemployment taxes low, and we’d still have our unemployment claims [benefits] for everybody in need,” said Lamont, a wealthy Greenwich businessman who took office last year.

Connecticut has received more than 600,000 unemployment claims since March and the huge number of pandemic layoffs and furloughs has exhausted the state’s unemployment trust fund, forcing Lamont to borrow more federal funds.

“In our first year, we got a couple hundred million dollars extra into the fund and that was really important,” Lamont said. “But that just bought us an extra few weeks given the nature of the unemployment claims.”

If the federal government does extend those added benefits, that would require the state to also extend benefits to Connecticut’s unemployed and further reduce the state’s dwindling resources, according to Steven Lanza, an associate professor of economics at the University of Connecticut. 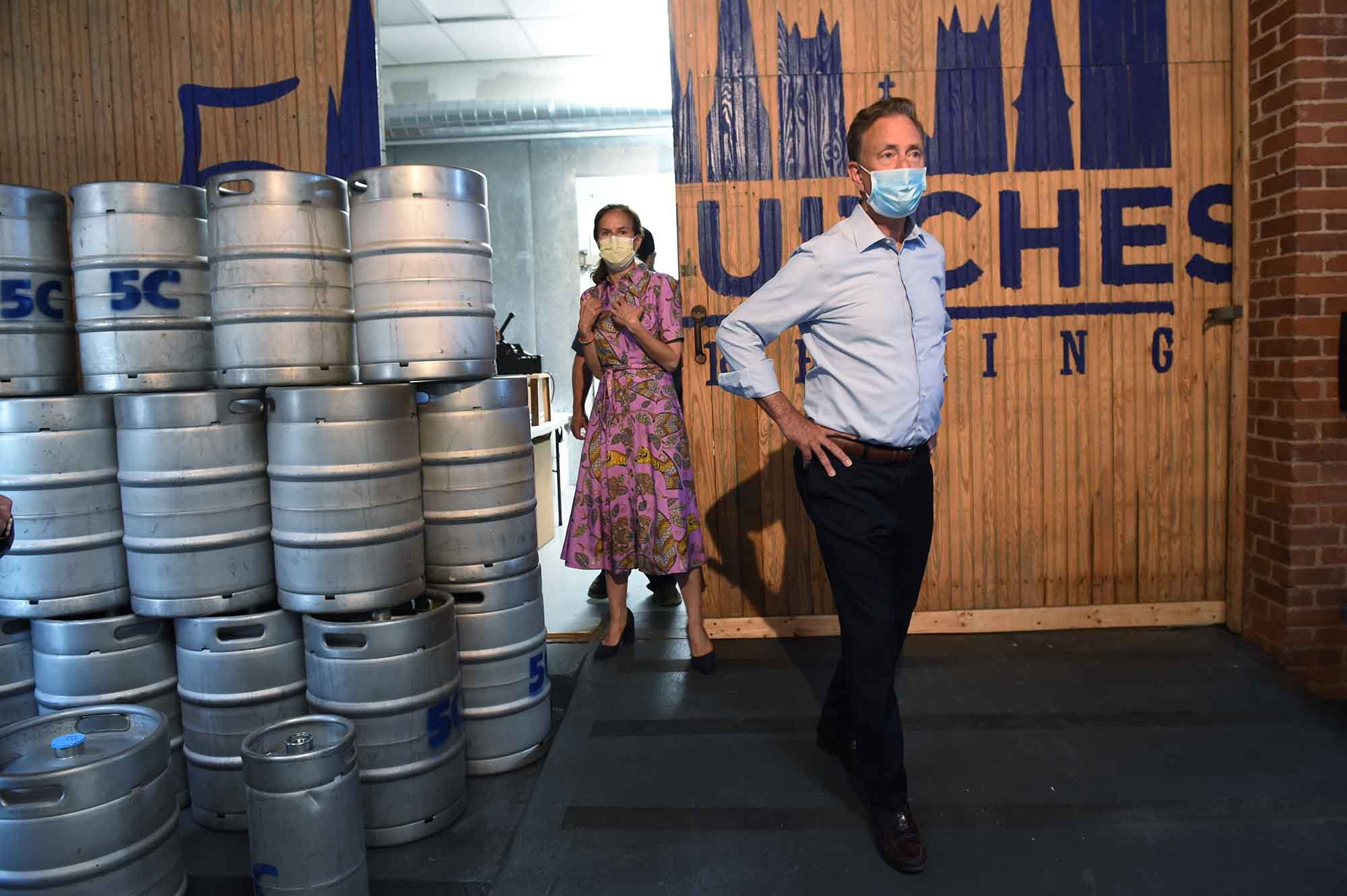 Gov. Ned Lamont and Lt. Gov. Susan Bysiewicz get a tour of 5 Churches Brewing in New Britain by owner Peter Lemnotis (hidden behind Bysiewicz) Thursday before they opened for indoor dining and drinking for the first time since March when they were shut down due to the COVID-19 pandemic. The brewery was opening with seating for 39 inside, down from their normal capacity of 150 due to the restrictions in the state’s Phase 2 opening guidelines.

But Lanza said extending federal and state unemployment benefits would not only help jobless people but also be a big boost to the economy.

“If this is the only practical way of infusing money into the economy, it’s probably a good thing,” Lanza said. He also warned that the jobs lost during this pandemic recession “will be slow to come back, if they come back at all.”

Asked what he would tell Connecticut families who have depended on that weekly $600 federal payment to survive the pandemic, Lamont said he would urge them to return to work as soon as possible.

“We’ve got the state unemployment compensation, we’ve opened up 95 percent of our economy, we’re urging everybody we can to get back to work,” said Lamont. “You’ve got another month [of the added federal benefit], and now’s the time to plan for that day that you get back to work now that all the stores and businesses are pretty much open.”

Lamont’s administration has also announced that it is revising its mandatory coronavirus testing program for all staff and patients at Connecticut’s nursing homes in cases where there have been no positive tests for 14 days in a row. 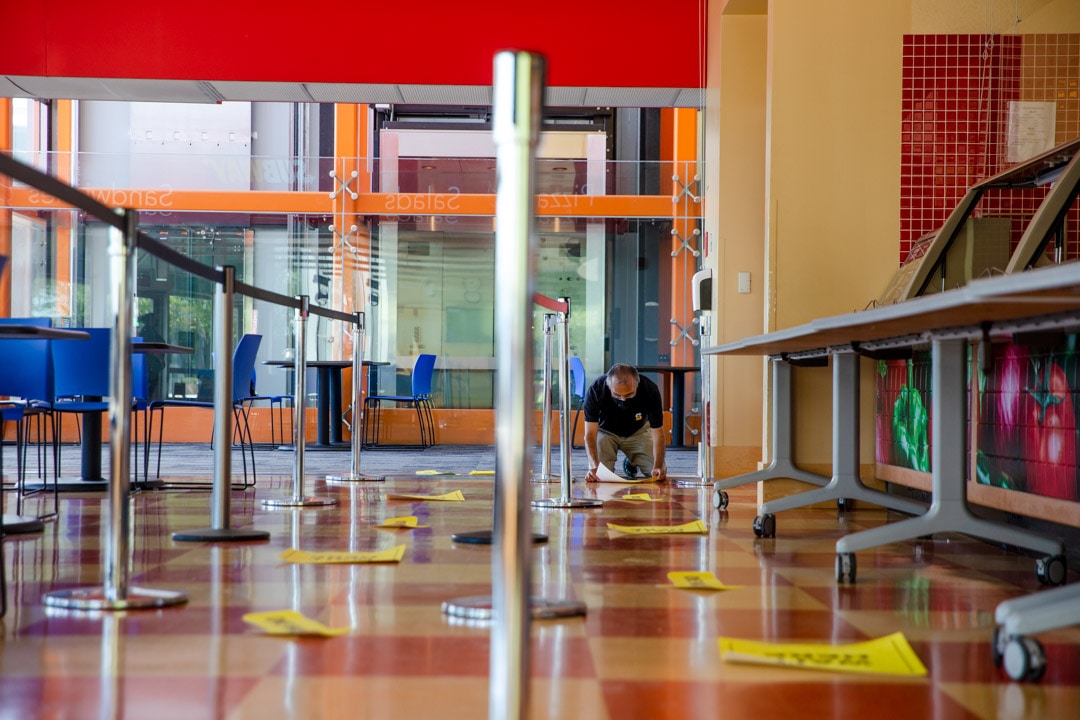 Kapil Taneja, owner of Subway at the Connecticut Science Center, puts out a sign to guide customers to one direction on Thursday. Taneja said the store is a busy location and customers are encouraged to order online to minimize crowd. Customers can dine in at less than 15 percent capacity. Taneja said that he also tripled the outside seats.

The governor issued a new executive order this week that will allow a reduction in the frequency of testing at all types of long-term care and assisted living facilities if that facility is found to be free of COVID-19 cases for two consecutive weeks.

Josh Geballe, Lamont’s chief administrative officer, said the new order “completely aligns our state policy with the guidelines from the Centers for Disease Control and the centers for Medicaid and Medicare services.”

Geballe said the full-scale, repetitive state testing program would resume at any nursing home or other facility where even one COVID-19 test was returned positive. 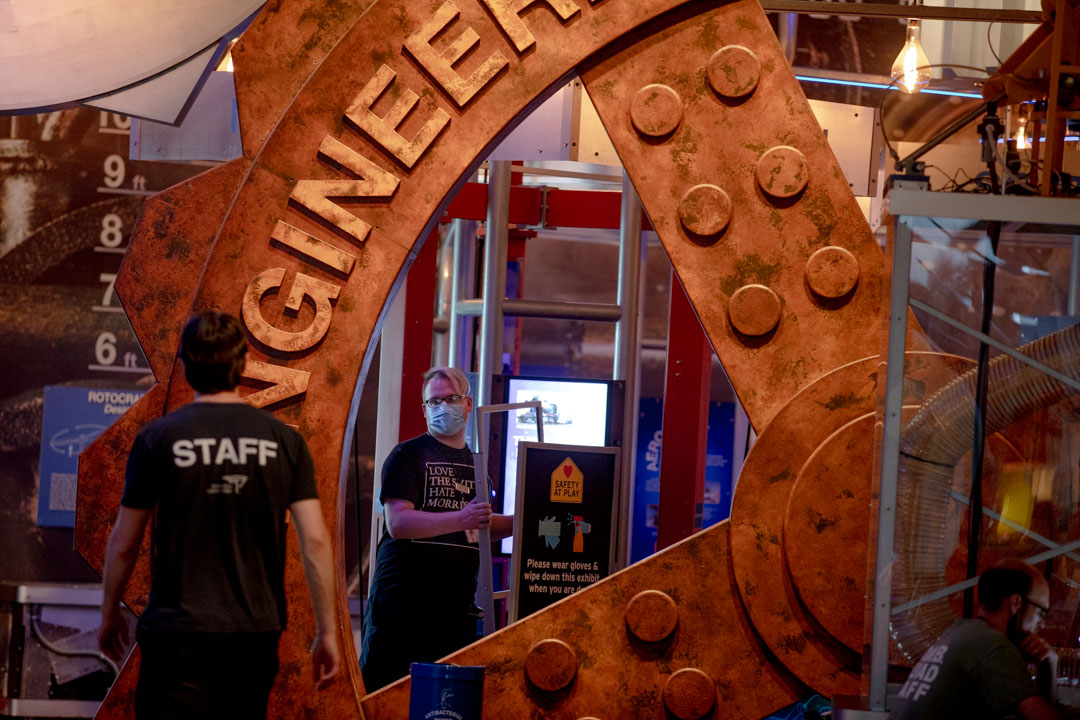 Eric Harris, center, sets up a sign that encourages visitors to wear gloves and wipe down the exhibit after usage on Thursday at the Connecticut Science Center. Over 500 signs and stickers were installed throughout the building for reopening.

An additional 4,722 coronavirus tests were conducted statewide since Wednesday, according to the latest state report, bringing the total number of tests in the state since the pandemic began to 370,638. Just 81 new COVID-19 cases were found during the previous 24 hours of testing, the state’s Thursday report showed.

Another seven coronavirus deaths were recorded in the new report, bringing Connecticut’s overall death toll to 4,226. The number of patients hospitalized for the virus continued to decline as another 10 COVID-19 patients were released, leaving 176 in hospitals.

A new study commissioned by the American Hotel & Lodging Association found the dramatic decrease in travel during the pandemic has cost Connecticut more than $287 million in lost state and local tax revenue due to the decline in hotel and gaming. 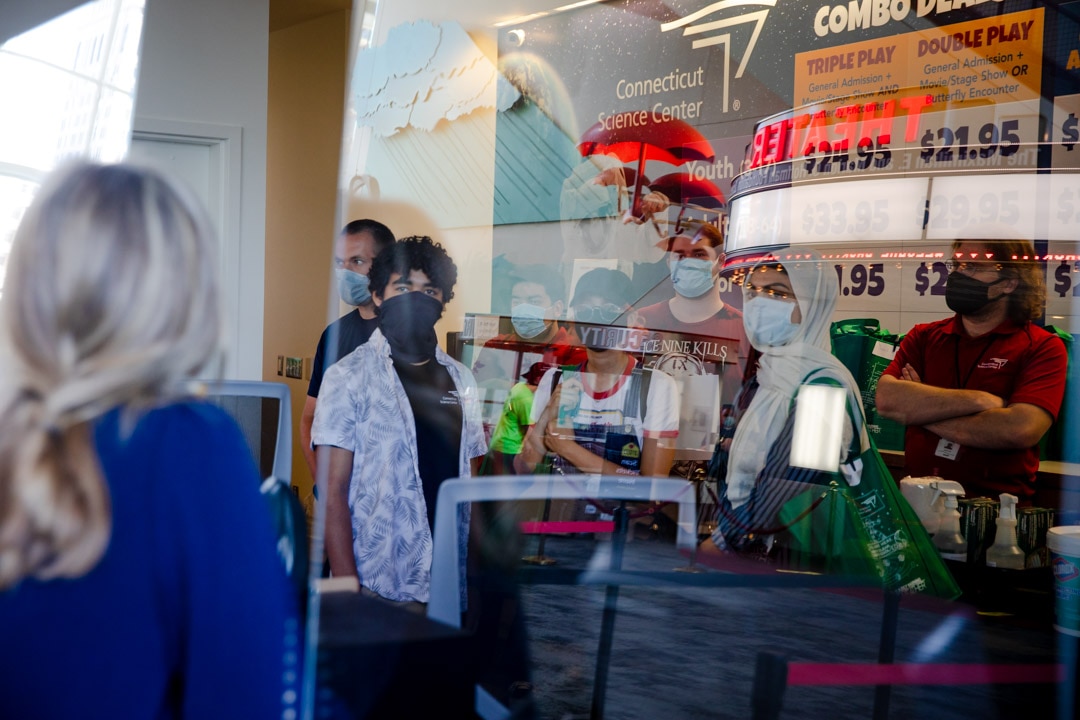 Staff members have a meeting to review safety and health protocols on Thursday at the Connecticut Science Center. The center will reopen on Saturday, June 20 to its members and on Friday, June 26 to the public.

“The dynamic growth of the hotel industry over the last decade has been upended by the pandemic, which has caused more than 70 percent of hotel employees to be laid off or furloughed,” Steve Matiatos, president of the Connecticut Lodging Association, said in a news release.

Connecticut has lost $183.1 million in state and local revenue from declines in gaming and $75 million in lost occupancy taxes, according to the study performed by Oxford Economics.

The report estimates that total losses in state and local tax revenues from hotels and gaming during 2020 will amount to $16.8 billion across the U.S.