'Who would’ve thought everybody was missing DMV so much?' 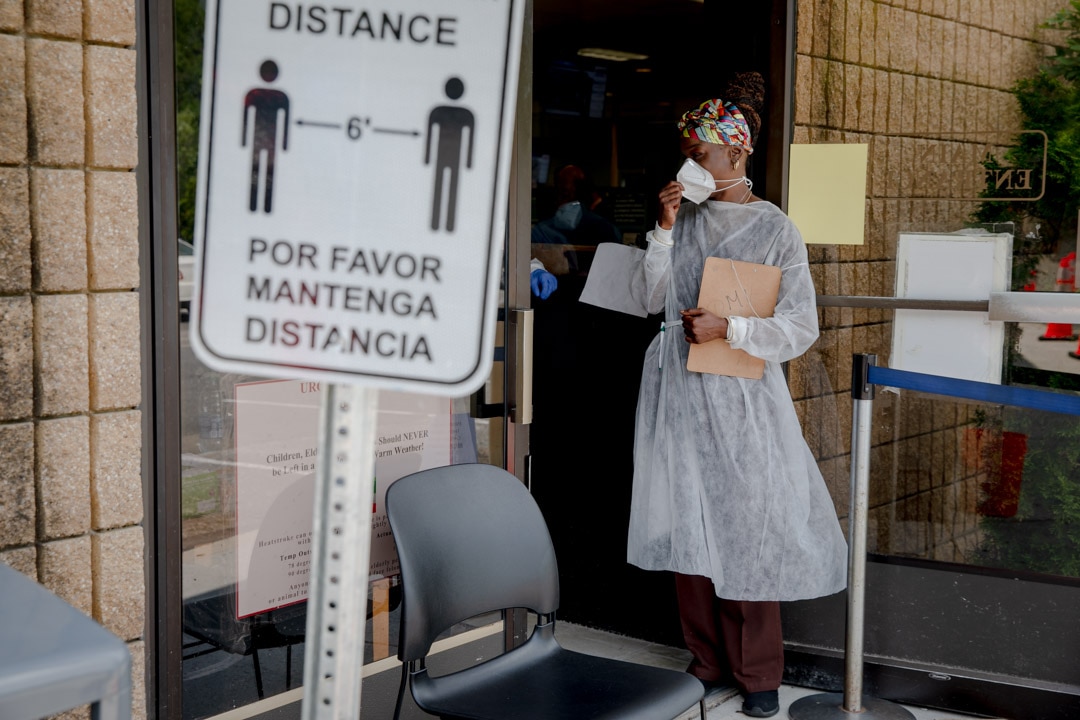 Welcome to the DMV: Cynthia Brown greeted customers by taking their temperature and quizzing them about COVID-19 symptoms.

Waterbury — The new COVID-ready Department of Motor Vehicles opened for license and registration renewals Tuesday, and the long-awaited first look at how public schools will operate in the fall will come Thursday.

“This is another sign that our state is getting back to business in a very cautious and thoughtful way to keep people safe,” Gov. Ned Lamont told reporters outside the DMV in Waterbury.

With COVID-19 cases falling in Connecticut and the rest of the northeast, yet spiking in Florida and other southern states, the governor has cut back on his daily pandemic briefing and shifted to events that underscore the state’s recovery, albeit in cautious terms.

The DMV is a case in point: Branch offices in Bridgeport, Enfield, Hamden and Waterbury opened for license renewals, but customers found reminders at every turn that the state still considers the novel coronavirus a risk.

Transactions are by appointment only, and there are no lines snaking through the branches. Customers are instructed to arrive at their appointed time, then wait in their vehicles to be summoned by text or email.

They were greeted at the door in Waterbury on Tuesday by Cynthia Brown, a mask-wearing medical assistant who took their temperature with a no-touch thermometer, quizzed them about potential COVID symptoms, then directed them to one of the socially-distanced chairs to await their turn at a transaction window protected by Plexiglas.

“I think the DMV’s got the right balance. We had to get back. We had a lot of demand,” Lamont said. “I think we’re showing that we can do this, but we do it cautiously with public health as a priority.”

On Thursday, state Education Commissioner Miguel Cardona will deliver a public briefing about the school reopening plan he has drafted after weeks of consultation with local school superintendents and others, Lamont said.

Connecticut is in the second phase of easing COVID restrictions, and so far the trend in new cases, fatalities and hospitalizations has been downward, even as other states see an uptick and the European Union contemplates keeping its borders closed to U.S. travelers. 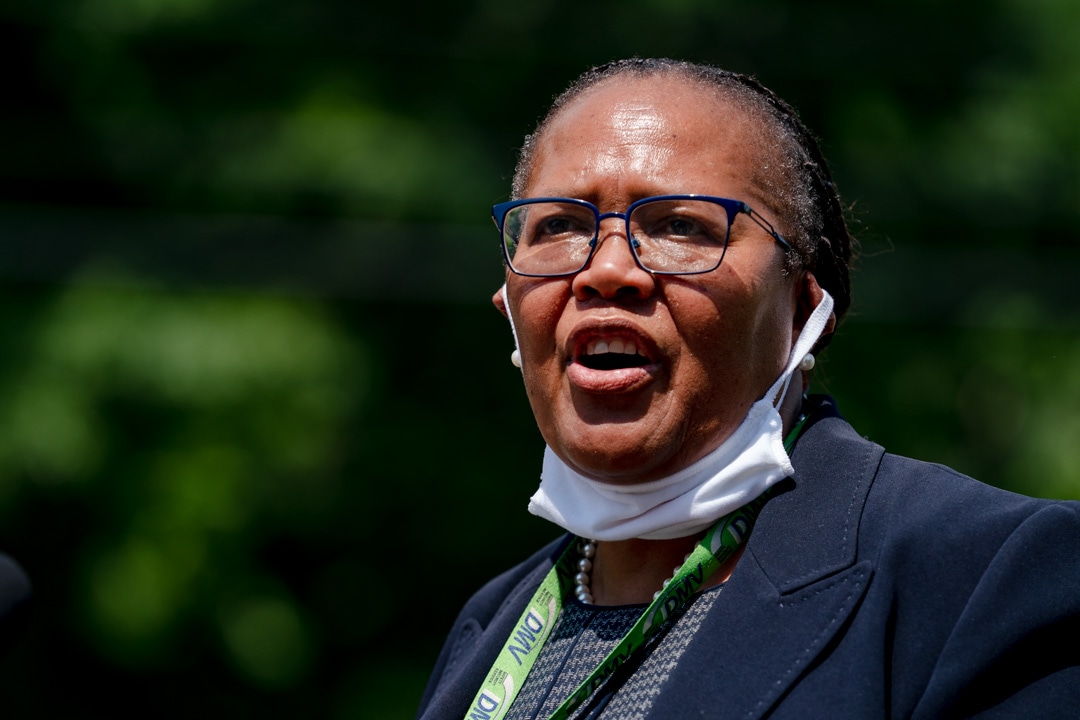 DMV Commissioner Sibongile Magubane answers a question during the news briefing on the partial reopening of in-person DMV.

“I am concerned there are an awful lot of flights into Bradley every day from Florida, and that Florida has an infection rate right now, a positivity rate, that is 10 times what we are here in Connecticut,” Lamont said.

Connecticut had 4,277 COVID-related deaths and 45,899 confirmed cases as of Tuesday afternoon, a one-day increase of 14 deaths and 117 new cases, but the percentage of positive test results has been about 1% in recent days, compared to 10% or more in Florida, Texas and Arizona. On Tuesday, 1.8% of the 6,396 new tests were positive.

The northeastern governors are discussing quarantines and testing of visitors from states with COVID hotspots, but Lamont declined substantive comment.

“Let me roll that out to you in a new few days,” Lamont said. “We’re talking to all the other governors. I don’t want to get ahead of myself.”

The DMV never fully closed. Commercial drivers could get license renewals even after Lamont largely ordered the closure of state offices in March as cases began to spike rapidly.

Between 60% and 70% of DMV transactions are now done on line, but license renewals and new licenses require a visit, said Commissioner Sibongile “Bongi” Magubane, the former Aetna information-technology executive hired 16 months ago to modernize the DMV.

But new drivers were out of luck. They could take the written test, but not the road test. About 1,000 applicants quickly made appointments when the DMV recently began taking appointments for road tests.

“Who would’ve thought everybody was missing DMV so much?” Lamont asked.

New licenses require an examination of primary documents, but beginning in two weeks the DMV will be offering an online pre-check system that will allow customers to submit facsimiles of their documents for review.

The new system is designed to reduce the current 20% “fail rate,” the DMV’s term for customers sent home because they lack a necessary document.

“We’re really using technology to transform how we are supporting the citizens of Connecticut for some very complex transactions that require many, many documents to complete,” she said.

The pandemic has accelerated computer upgrades and modernization measures throughout state government as the workforce was forced to telecommute, as in the private sector, said Josh Geballe, the state’s chief operating officer.

Magubane said some of the DMV employees doing the document pre-checks will be working from home, as most DMV offices are too small to allow social distancing. About 130 to 160 employees have been rotating from home to staffing DMV branches.

On Tuesday, Lamont mingled with waiting customers, asking how they thought the system worked.

Tom DePalo of Newtown sat in the second row when Lamont greeted him. DePalo needed to renew his license.

He tried the Danbury branch, the one closest to his home, but it is not yet open for renewals. By 11:15 a.m., he had made an online appointment in Waterbury and made it to the small inside waiting area.

As the governor’s press conference ended 20 minutes later, DePalo was leaving with his new license.

The DMV’s web site is at portal.ct.gov. 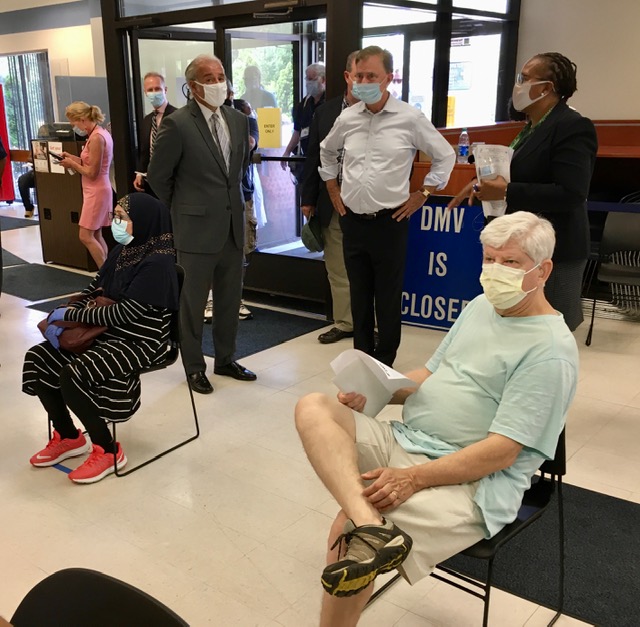