Conn., N.Y., and N.J. to quarantine visitors from COVID hotspots 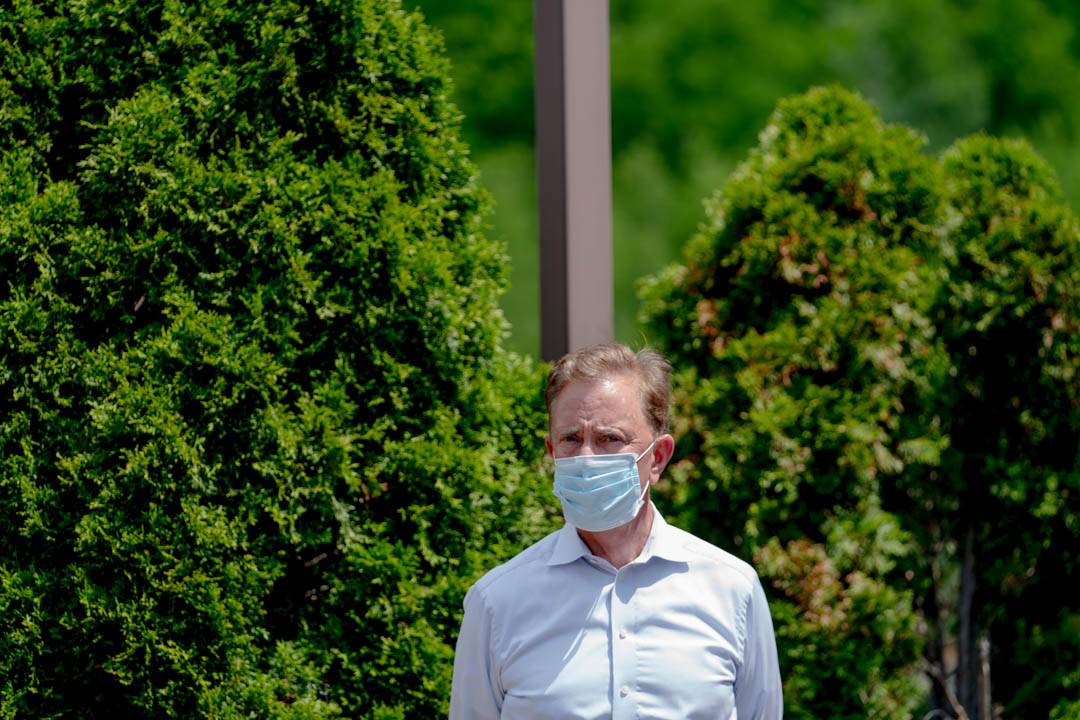 Gov. Ned Lamont at a news briefing in Waterbury earlier this week.

The governors of Connecticut, New York and New Jersey jointly outlined protocols Wednesday for self-quarantine measures to curb the spread of COVID-19 by visitors from states experiencing a resurgence of the disease and an alarming spike in hospitalizations.

In a video announcement interrupted by technical glitches, Governors Ned Lamont of Connecticut, Andrew Cuomo of New York and Phil Murphy of New Jersey said their states will act together to keep air travelers from undermining their successful efforts to slow COVID-19.

The move by three Democratic governors largely is an educational measure that seems intended to reinforce and publicize current practices in northeast states that have flattened the curve of new cases, while discouraging tourism from states with higher infection rates and less stringent precautions.

It also has political overtones, coming from three blue states as President Donald J. Trump is resuming campaign rallies, with a mix of support and concern expressed by Republican governors and other elected officials.

Cuomo, who has been criticized for allowing the virus to take hold and praised for his subsequent response, took pains to blame the pandemic’s early tri-state impact on a federal government that focused on the initial outbreak in Wuhan, China and ignored the threat of transmission from European travelers.

The initial spread came from among the 3 million airline passengers who came to the region from Europe as the pandemic was unfolding, Cuomo said.

“When people take a deep breath and the political rhetoric dies down, those are going be the facts.”

The governors said they were acting Wednesday to make sure that air travel, this time domestic, does not undo their regional success.

“Been there, done that,”  Cuomo said.

In a separate briefing for Connecticut reporters, Lamont and the acting public health commissioner, Dr. Diedre Gifford, said the tri-state area will issue weekly lists of states covered by the new travel rules, which will be largely self-enforced.

But there are differences in the state’s approach, with Cuomo threatening fines on violators and Lamont emphasizing education and public pressure.

“Right now, it’s going to be voluntary,” Lamont said. “Right now, you are going to be clearly notified that you must quarantine if you haven’t tested negative within, say, 72 hours. And you’re going to be notified of that in strict  terms. And hotels will notify you of that before.”

If that does not work, the state will “consider some stricter measures for enforcement,” Lamont said.

Visitors from eight states will be monitored initially, but there more than 30 states and U.S. territories to report a higher rolling average of new cases, with a half-dozen experiencing alarmingly high hospitalization rates.

Dr. Scott Gottlieb of Westport, the former Food and Drug Administration commissioner under Trump and an advisor to Lamont on Connecticut’s easing of COVID restrictions, said on CNBC that he expected hospitals in Arizona, California, Florida and Texas to consider limiting elective surgery to ease the coming strain on hospitals.

As hospitalizations soared in and around Houston, the nation’s fourth-largest city, Texas Gov. Greg Abbott urged a television audience Tuesday to shelter in place.

“The safest place for you is at your home,” said Abbott, a Republican.

In Connecticut, Lamont has tried to strike a balance between urging a return to work and play with 95% of the state’s economy now open and underscoring that the state’s low rate of positive tests is the consequence of continued social distancing and the wearing of face masks indoors and in crowds.

While Cuomo blamed travelers on the initial outbreak in the region, they arrived in a New York with scant testing and that offered no guidance for social distancing or the use of masks. Today, testing is readily available and most northeast states require masks to enter stores and gatherings indoors, where the virus transmits most easily, remain limited.

“But the fact of the matter is, sadly, in many of the states with the highest prevalence of infection right now, we know that some of the strict social guidance measures that Connecticut, New York and New Jersey have been working on for the past few months are not being followed.”

Gifford said the self-quarantine applies to anyone arriving from a state with a positive test rate higher than 10 per 100,000 residents or a state with a 10% or higher positivity rate over a 7-day rolling average. Those states currently are Alabama, Arkansas, Arizona, Florida, North Carolina, South Carolina, Texas and Utah.

Only 14, or 1.2%, of the 1,175 tests results reported Wednesday in Connecticut were positive. The Department of Public Health reported another 10 COVID-related deaths, bringing the total to 4,287 since the first fatality in March. Hospitalizations continued to fall.

The self-quarantine for visitors becomes effective at 11:59 p.m. Wednesday.

“We’re looking at updating it weekly, so that travelers can plan and they know whether their state is on the list or not,” Gifford said.

The focus Wednesday was on air travel, but the state plans on highway signages and other outreach to underscore that anyone traveling to the region from a hotspot should self-quanrantine for 14 days.

The Travelers Championship opens Thursday, with golfers competing at TPC River Highlands in Cromwell without spectators. But at least three players have withdrawn due to COVID, including Brooks Koepka, one of the marquee golfers on the PGA tour. His caddy tested positive Wednesday, two days after testing negative.

“I’m going to pull out to protect everybody else. I think it’s the right thing to do,” Koepka told Golfweek. “I don’t want to risk anyone’s life if they have respiratory issues or underlying conditions. The only way this Tour can continue is if guys to do this sort of thing and be proactive about it.”

Lamont said the testing is evidence of a system that is working.

“I think you should have some confidence that the Travelers is enforcing their version of the quarantine very strictly,” Lamont said. “They’re making sure everybody who is going to be at the tournament, players and non-players alike, have to be tested.”