Lamont shoots back. 'Keep politics out of it.' 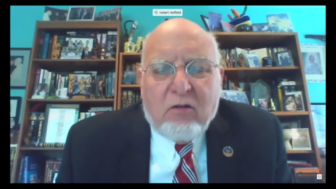 Washington – Centers for Disease Control and Prevention Director Robert Redfield on Thursday dismissed the efforts of Connecticut, New York and New Jersey to require self-quarantine of visitors from states where coronavirus infections are spiking.

“I don’t think we have any clear evidence…to support the public health value of that decision,” Redfield said.

Gov. Ned Lamont said Redfield should “keep politics out of it.”

“What, discouraging people from an area that has a 40% infection rate, usually asymptomatic, coming into our state, he doesn’t think that would have great value?” Lamont asked. “He thought it had great value when the shoe was on the other foot and Florida was quarantining Connecticut a few months ago, when we had the higher infection rate.”

Redfield weighed in on the tri-state attempt to quarantine visitors during a press conference in which the CDC unveiled new recommendations. He stressed the dangers COVID-19 poses for older Americans – the CDC  says eight out of 10 COVID-19-related deaths in the United States have been among adults aged 65 years and older  —  and issued new guidelines for seniors when they leave their homes.

Those guidelines included limiting contact with others and avoiding large groups of people, indoor gatherings, and people who are not wearing masks.

But only New York is enforcing the quarantine with a penalty. Failure to quarantine in New York could result in $1,000 fines. Meanwhile, the governors of Connecticut and New Jersey say there are no enforcement mechanisms for their efforts.

“Right now, it’s going to be voluntary,” Gov. Ned Lamont said on Wednesday. “Right now, you are going to be clearly notified that you must quarantine if you haven’t tested negative within, say, 72 hours. And you’re going to be notified of that in strict terms.”

Redfield said that more infections in hot spots like Florida and Texas could partly be attributed to an increase in diagnosing illness among young people, who are less likely to be hospitalized than older people. But when pressed by reporters Redfield conceded hospitalization rates are also rising in many states

“This is a significant event,” he said “Obviously we are concerned.”

The CDC also updated the list of underlying conditions that put people at greater risk of becoming gravely ill, and dying, of COVID-19. They are: