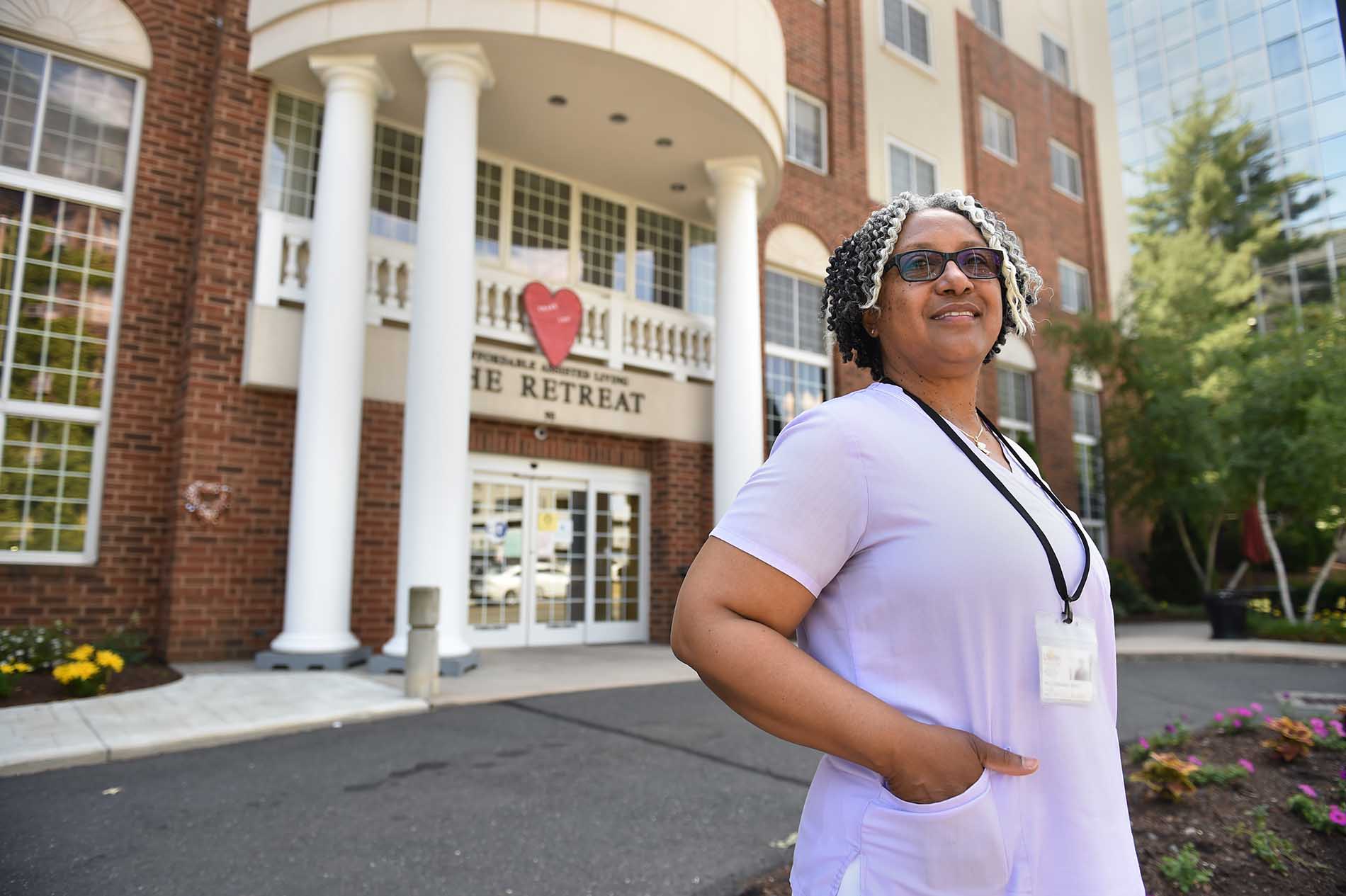 Milca Rosario is a supervisor at The Retreat assisted living facility in Hartford where 100 members live, June 22, 2020.

When Major Milca Rosario got the call on March 25 that she was being deployed to a COVID-ridden New York City, she reacted in a way many would find unusual.

This is the third story in an occasional series featuring the experiences of people from around Connecticut.

“Finally, here’s the opportunity to go and do the thing that I trained for,” she said.

The Hartford resident joined the Army Reserves in 2002 as a nurse. Every year since, she left her two children and her civilian nursing job—most recently, as a nurse supervisor at The Retreat, an assisted living facility in Hartford—for a 14- to 28-day training. Whether in Texas, Georgia, or Wisconsin, she and her unit practiced setting up a fully functioning hospital in a variety of outdoor conditions. They also practiced assessing and addressing a vast array of battle injuries, from gunshot wounds and blown-off limbs to internal injuries from impact accidents.

Now, for her first-ever full-time deployment, she found herself moving not to an international war zone, but to New York City—with no idea what to expect. Her unit, Urban Augmentation Medical Task Force 804-1, was one of four that the Army mobilized to New York City in April as COVID-19 cases were rapidly increasing, tasked with supporting the relief efforts until cases started dwindling.

When she arrived, she learned that her 85-person unit was being assigned to the Javits Center, a convention center temporarily converted into a 2,500-bed hospital. At first, it was designed to relieve hospitals of non-COVID-19 patients admitted for other reasons, but after it sat nearly empty while hospitals were crammed with virus cases, the governor designated it a COVID-only treatment facility.

Rosario was designated head nurse within her unit. Every morning, she woke up at 4:30 a.m. to commute from the hotel to Javits, get through the health screening and PPE-donning process, and start her shift at 7 a.m.

She reviewed the patients assigned to her unit and distributed tasks to her nurses. Blending in with the civilian medical staff, they went to work. During the 12-14 hour shift, when she wasn’t supervising, she was working on the floor alongside the nurses, she said.

“The best way to show support to your staff is by doing things,” she said.

Rosario had dreamed of joining the military since her childhood in Loíza, Puerto Rico. But she never had her parents’ approval.

“I was brought up in a very conservative home, where being in the military was something for boys in the family, not girls,” she said. Instead, she pursued her associate’s degree in nursing at University of the Sacred Heart in San Juan and became a nurse.

She married and had two children before moving to Connecticut in 1991 for her husband’s job at a bread company in Hartford. She moved between jobs in hospitals and nursing homes and working as a home care nurse. After she and her husband divorced in 2001, she took jobs at assisted-living centers with more regular hours so she could balance work with raising her teens and pursuing other interests.

She returned to school and earned her bachelor’s degree in nursing from the University of Hartford in 2002. A classmate joined the military after the September 11 attacks, she said, and he soon told her that there was a need for health care professionals. She joined, feeling she had something meaningful to offer with her nursing experience.

“It was a desire to put my little grain of sand in, and help out,” she said.

Heidi Lubetkin, Vice President of Clinical Support Services for Community Renewal Team, oversees Rosario’s work at The Retreat and said that she is a “very calm and consistent” worker with “quiet confidence.” She recalled the day Rosario came to her office and told her she was being deployed.

As the days at Javits wore on, the most difficult aspect of the situation for both the caretakers and their patients, Rosario said, was the isolation from loved ones. She described it as heartbreaking to see her patients suffering and dying without family allowed nearby.

One time, though, about four weeks into Rosario’s deployment, a patient mentioned that her sister was sick with COVID-19 as well, and she wondered if she had also been transferred to Javits. A staffer searched through the records and found that she was indeed being cared for in the same building. The nurses arranged for the two to be moved next door to each other, and the sisters were able to talk through the temporary hospital’s thin walls.

“It was a very rewarding outcome,” Rosario said.

Even though the hours were long and taxing, she said, working at Javits was comfortable compared to her military training. Having to wear PPE was nothing compared to “sweating soup” in a heavy-duty suit that protected its wearer from the nuclear, biological, and chemical dangers in a war zone. Most importantly, Javits had real toilets, Rosario chuckled. She never had to worry about physical danger, either.

“Here, nobody’s shooting at you,” she said.

Throughout the ups and downs of being a front-line worker, she said, she tried her best to stay positive and diligent.

“You’re so busy that you just concentrate on the task at hand, and what you have to do next,” she said. “And you just put one foot in front of the other.”

Near the end of two months, the rate of patient intake was dwindling, then flattening, and slowly but surely, Javits emptied out. In total, 1,095 patients were treated at Javits before it closed on May 1.

Rosario and her unit were quarantined in New Jersey at first to see if they would be redeployed to one of New York’s hospitals, but after about two weeks, they were sent home. Rosario returned to Hartford, where she self-isolated in her apartment for another two weeks before heading back to her civilian job, which has yet to see any COVID-19 cases among its residents or staff.

The day she returned, June 4, she was met with a surprise party. Hartford Mayor Luke Bronin, leaders from her workplace, and close friends celebrated her return with flowers, signs and short speeches.

“It was a spectacular opportunity to learn,” she said. “And you feel so amazed, how when people come together, they can do so much good for others.”