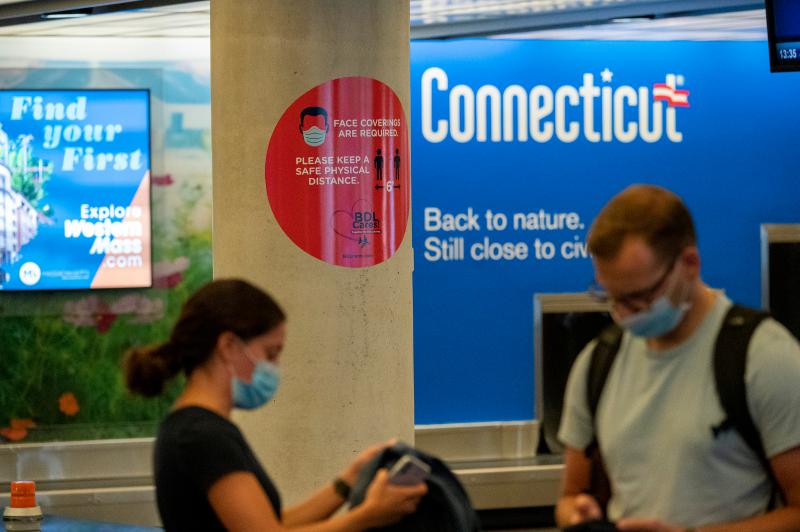 Signs at Bradley International Airport remind travelers to wear masks at all times and maintain proper social distancing on June 25.

The number of patients in Connecticut hospitals with COVID-19 increased Friday — the first uptick in hospitalizations in the state in a month, as concerns grew across the country about rising coronavirus infections.

State data shows the number of patients hospitalized in Connecticut with COVID-19 increased by five on Friday, bringing the total to 127. This was the first increase in hospitalizations since May 25.

The governor’s office reported 65 new cases of COVID-19 Friday out of 7,922 new tests — a 0.8%  positive rate. There have been 46,059 COVID-19 cases overall  in Connecticut, according to the data. There were nine more deaths associated with the virus reported in the state Friday, for a total of 4,307 reported since the start of the pandemic.

While trends are improving overall in Connecticut, The Centers for Disease Control and Prevention reported 37,667 new cases nationwide Thursday concentrated in southern states.

The Connecticut Department of Labor is recommending residents receiving payment under the federal Pandemic Emergency Unemployment Compensation program file for benefits under the state unemployment program, as payments under the national program in response to COVID-19 expire.

“We are urging Connecticut workers who are about to exhaust their PEUC benefits to file for extended state benefits,” DOL Commissioner Kurt Westby said in a statement. The department will mail letters to recipients starting Monday.

Since March 13, the department has received over 656,000 unemployment applications.

The Department of Public Health received seven responses to a request for a private independent investigation into nursing home deaths associated with COVID-19,  Heather Aaron, Deputy Commissioner of the department, said on a virtual legislative appropriations committee meeting Friday afternoon.

Aaron said her staff would submit a recommendation to Acting Public Health Commissioner Deidre Gifford by the end of the day Friday. Aaron said the candidate that is being recommended is not a Connecticut firm but has the experience to conduct an unbiased investigation.

Denny McCarthy withdrew from the Travelers Championship on Friday after testing positive for COVID-19. McCarthy played Thursday but woke up that night feeling “achy and sore,” according to Ryan Lavner of the Golf Channel.

Bud Cauley, who played in the same group as McCarthy, chose to withdraw from the tournament. The third member of the group from Thursday, Matt Wallace, teed off Friday. Both Cauley and Wallance tested negative Friday, according to a PGA Tour statement.

Gov. Ned Lamont said he was unconcerned by the players and caddies testing positive for COVID-19 at the Travelers Championship golf tournament in Cromwell, which began Thursday. The aggressive testing is evidence of a success, he said.

“The PGA is taking the protocols seriously,” he said.

At one point last year, Hardy had not resolved four police shootings that were more than seven years old. During the testimony to the commission, she talked about the oldest unresolved police shooting, the 2008 death of Joseph Bak – and admitted that she didn’t contact Bak’s family or their attorney during her investigation

“If given the opportunity to be re-appointed, something like this will never happen again,” she said.

Hardy was recently suspended for four business days. At the time she had just eight days left in her appointment.

The Department of Revenue Services reminded residents that Connecticut’s 10 cent tax on single-use plastic bags is set to go back into effect on Wednesday, according to a press release.

Lamont suspended the tax on March 26 amid concerns that shoppers bringing reusable bags from home could contribute to the spread of the COVID-19 virus among grocery store workers and the public.

The Department of Energy and Environmental Protection expressed support for reimplementing the tax.

“Given the most current scientific information available, reusable bags do not serve as a significant source of infection for COVID-19,” the DEEP tweeted Friday. The department noted shoppers should clean bags between uses and that the single use, plastic bag tax first implemented on July 1, 2019 has been a success to keep one-time use bags out of landfills.

Lamont acknowledges pushback on plan to return to schools

Lamont acknowledged Friday that the protocols outlined Thursday for reopening schools raised concerns and left questions unanswered, including the practicality of expecting children to wear a mask throughout the school day.

“We’ve got to work through this,” Lamont said. “I’ve got a lot of teachers who say, ‘I don’t feel safe coming into the classroom, especially at my age, unless people are wearing masks.’ I’ve got a lot of parents saying, ‘I don’t feel safe having my kid go to school unless the other children are wearing masks, along with my child.’ We know what an enormous difference it makes in terms of public health.” 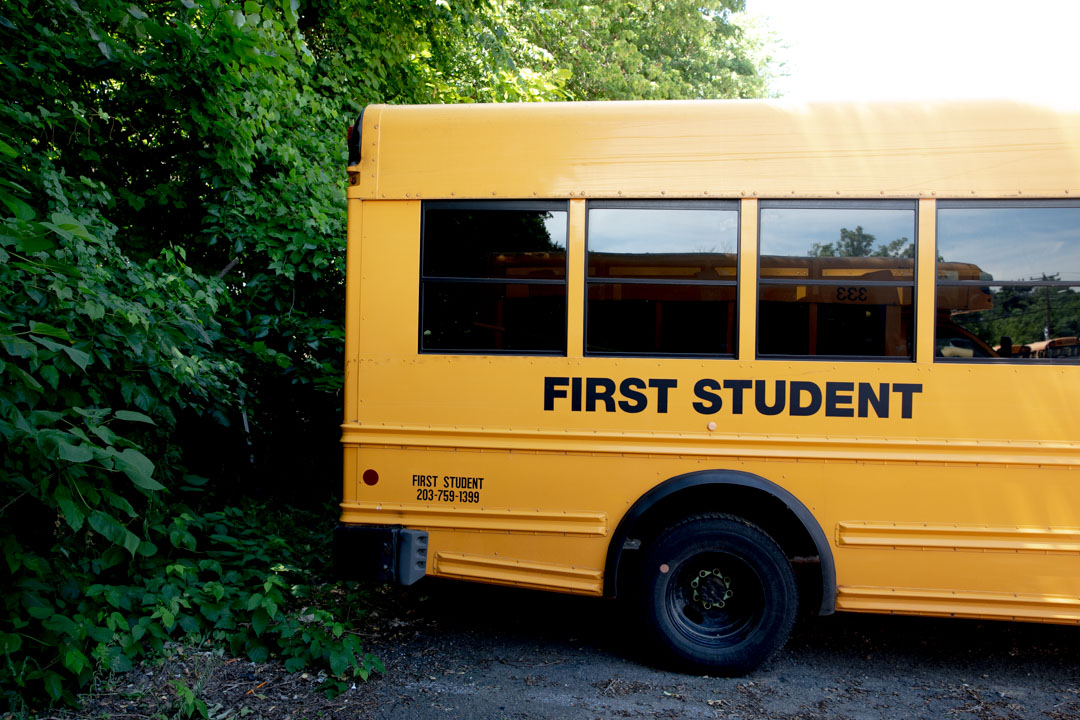 School buses are parked in Hartford on Thursday, June 25.

Lamont said the release of the protocols is part of a continuing conversation with local education officials, teachers and parents. He said he believes schools can reopen safely, providing important social interactions as well as instruction.

State to get nearly $13.5 million in additional Head Start funding

Under the new federal funding, Capitol Region Education Council (CREC) will receive more than $9 million for its head start program and the Human Resources Agency of New Britain, Inc will get about $4.5 million.

State Police Detective Paul Makuc, of the fire investigations and enforcement unit, said law enforcement has seen a huge increase in the use of illegal fireworks in the state this year. The uptick was expected due to the cancelation of public displays because of social distancing guidelines. Speaking at a morning press conference Friday, Makuc said the state would typically have issued about 150 public display firework permits. This year it has issued about 12 due to COVID-19 restrictions on large public gatherings.

Consumers must be aware if they are buying and using fireworks in Connecticut, Makuc said. Sparklers and fountains are the only types that are legal in the state. Consumers should always look at caution and warning labels before buying or using fireworks, he said. If the caution label says “Emits showers of sparks” it is OK to use in Connecticut by people over 16 years old. If a warning label says “explosive,” “flammable” or “shoots a flaming ball” then it is illegal in the state, Makuc said.

Possession of any Class M device is a  felony in Connecticut, he added. Novelties like smoke bombs, “snakes” and snappers are also banned.

New Britain, Waterbury and Naugatuck are among the few towns that have announced plans to hold public fireworks displays this summer.

Why are we frightened to take off our masks?