Health care workers at Golden Hill Rehab Pavilion in Milford react with heart hands to a group of lawmakers who visited the facility.

Following criticism of the response to COVID-19 outbreaks in Connecticut’s nursing homes, Gov. Ned Lamont said Monday the state would hire an independent group to conduct a review of the preparations and actions taken at those facilities during the pandemic.

The analysis will look at the response by nursing home executives, facility managers and workers, along with state officials. Connecticut’s Department of Public Health licenses the facilities and has been tasked with overseeing inspections before and during the pandemic. It is also one of the agencies in charge of distributing personal protective gear and testing materials to nursing homes and other long-term care facilities.

The administration described the review — which will cover both nursing homes and assisted living centers — as a “top-to-bottom analysis of all elements of the pandemic and how it was addressed in these facilities.” As of last Wednesday, 2,542 nursing home residents had died of COVID-19 or were presumed to have died of the disease. The fatalities represent 64% of the state’s overall coronavirus deaths.

More than 8,500 nursing home residents have been infected with the virus — about 20% of the state’s COVID-19 cases.

As of last Tuesday, 337 people had died of the disease or were presumed to have died of it, in assisted living centers. More than 1,000 people in those facilities have tested positive for COVID-19.

Family members with loved ones in nursing homes have been critical of the facilities’ response to the pandemic, saying that workers have made rounds without protective gear, that infection prevention measures weren’t followed and that they could not get information about the spread of the disease inside the homes.

Inspectors who have visited the state’s nursing homes since the pandemic began found infection control problems in one out of every four facilities. The issues ranged from staff not using protective equipment to commingling COVID-19-positive residents with those who were healthy.

Federal data show that nursing homes where the virus has hit hard were more likely to have infection control issues than those with fewer cases. The lapses were also more likely to occur at facilities where more people of color reside. 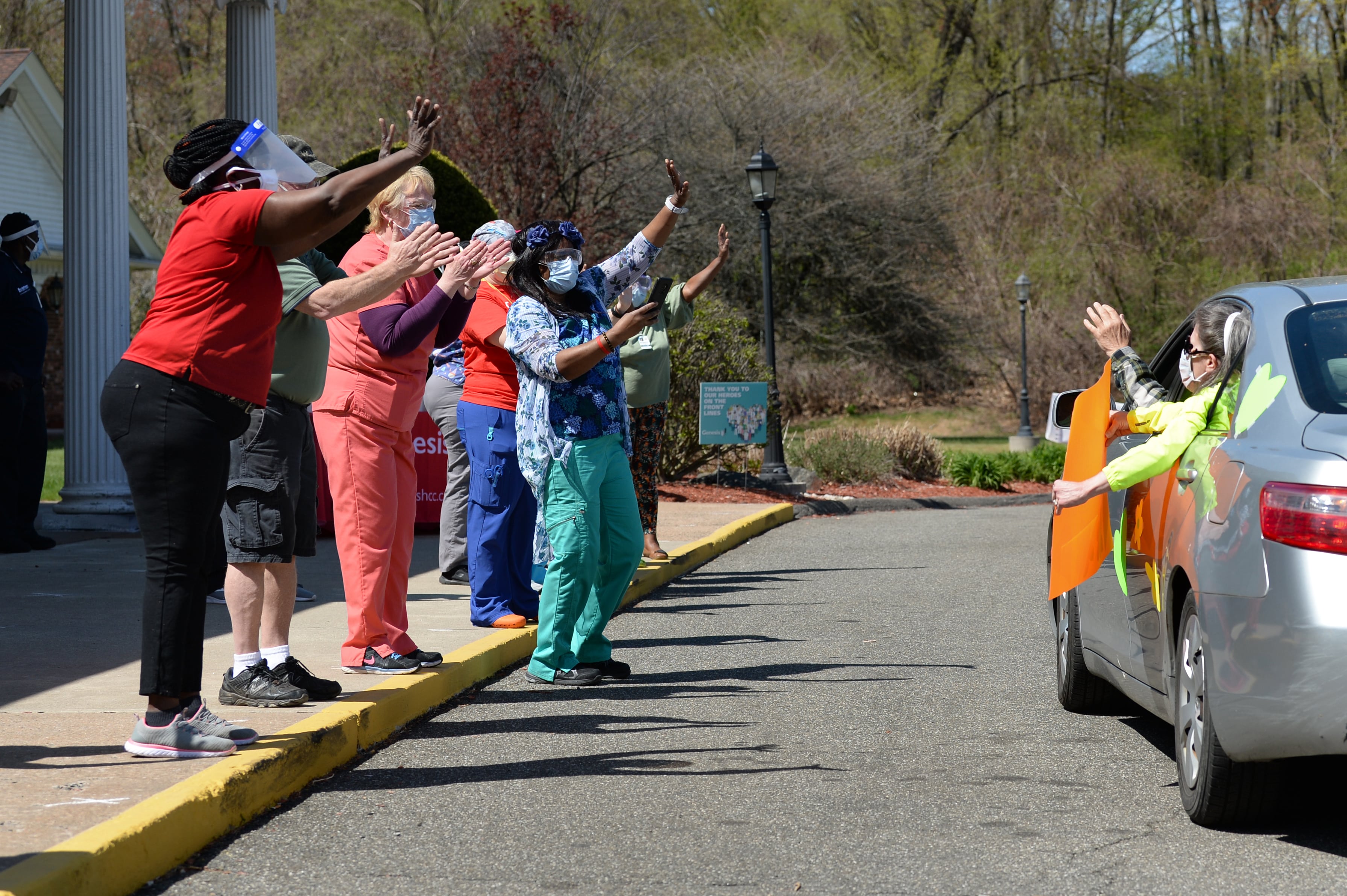 Health care workers at Kimberly Hall North in Windsor wave to supporters as they show their support with a drive-through tribute.

Lawmakers, nursing home workers and patient advocates have also been critical of the state’s response to the coronavirus outbreak. They have questioned why state officials did not pursue broad testing of nursing home residents and employees sooner (the state began its effort in May), and have faulted the state for not providing enough protective equipment to staff at those facilities.

The outside group will examine the response and issue a report on its findings, with proposals for reform included.

Legislative leaders this spring had called for the creation of a task force to examine the state’s and nursing homes’ actions during the pandemic. Rep. Sean Scanlon, a Guilford Democrat who is a co-chairman of the legislature’s Insurance and Real Estate Committee, said the task force would include lawmakers, health experts, nursing home industry officials, union leaders and workers from the facilities. Members would review policies on the use of personal protective gear, the availability of protective equipment and testing materials, infection control strategies and cohorting practices, among other issues.

Scanlon said Monday that while he is glad Lamont ordered the independent review, lawmakers should still proceed with a task force.

“I still believe the legislature should be performing an oversight role on this,” he said. “We have a responsibility to conduct oversight. And this is a great example of something I know there is a lot of bipartisan support to look at.”

“I applaud the governor for taking this initiative to undertake an investigation looking at the industry itself – the owners, the executives, the management, the staffing — and the state’s responsibility,” he said.

Lamont’s office said legislators’ input would be included in the review, as would feedback from nursing home leaders and union officials. State officials did not say how much they planned to spend on the analysis.

Matthew Barrett and Mag Morelli, whose organizations collectively represent more than 170 of the state’s 213 nursing homes, said they were supportive of the review.

“It is essential that we thoroughly evaluate our state’s response in a non-biased and inclusive way so as to learn from the science and help to prepare for a potential second wave of the virus,” they said.

Lamont’s administration said the review would be completed and made public by the end of summer, in advance of a possible second wave of COVID-19 this fall.