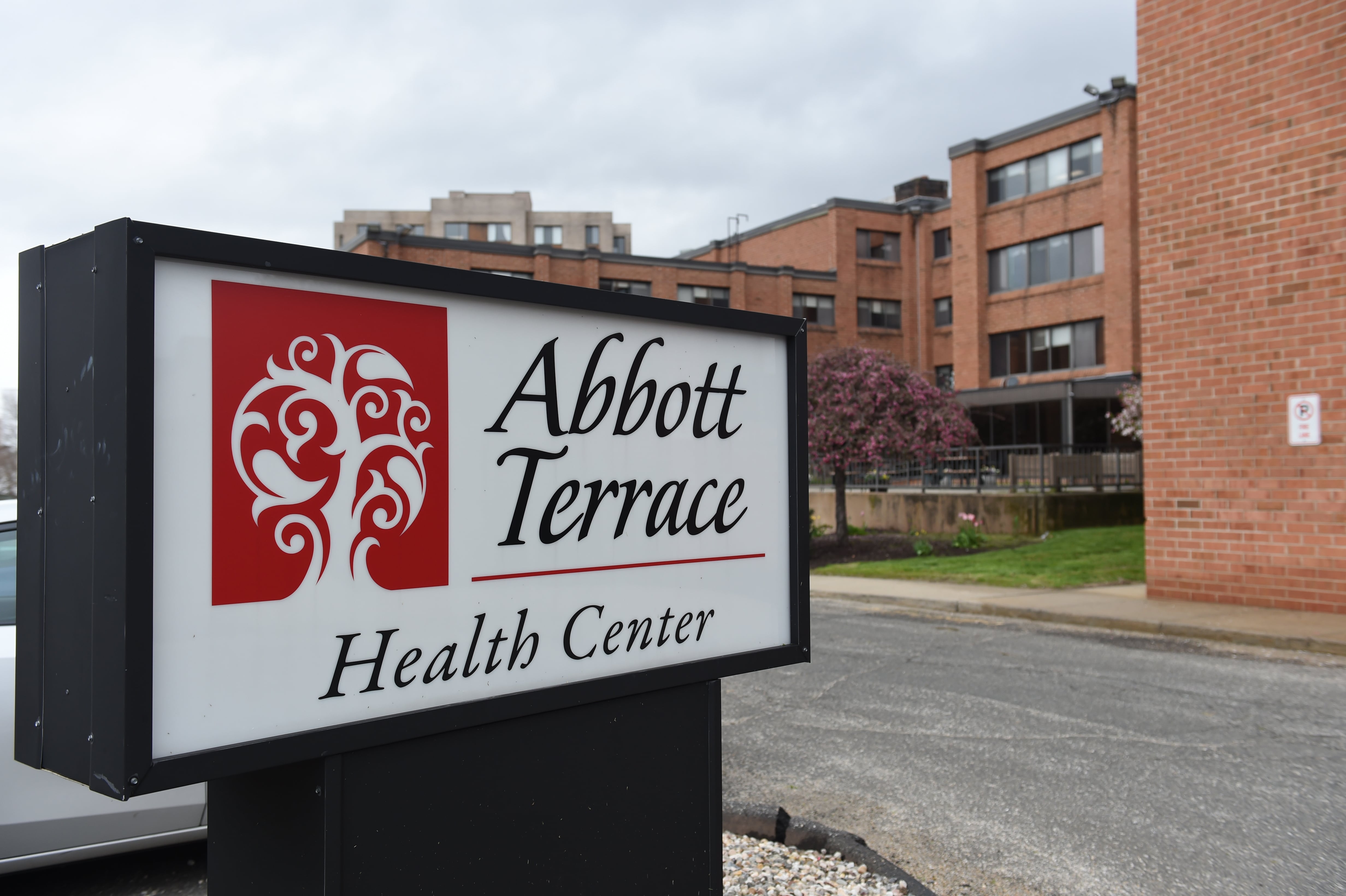 Last summer – months before the novel coronavirus began its deadly race across Connecticut – dozens of residents at a Waterbury nursing home started wheezing. Some had trouble breathing. Others became congested.

The “respiratory outbreak” at Abbott Terrace Health Center touched 33 elderly or disabled people in all six units at the sprawling, red-brick complex. Within two weeks, one out of every six residents had contracted the illness.

Federal infection control inspectors cited the nursing home for its lack of preparedness to curb future outbreaks. During their July visit, inspectors found that health care staff had not washed their hands and had failed to switch gloves when working with different residents or when changing soiled linens. Rather than use a linen cart, some staff carried dirty laundry against their chest.

Training on ways to control the spread never happened for most workers last summer. Inspectors could find no proof that employees had checked on one sick resident with a history of pneumonia the morning he died.

That was the last public accounting of inspections at the Waterbury facility, which now has one of the highest infection rates of COVID-19 in Connecticut.

Over the last 14 days, the number of residents with the disease jumped from 69 to 120. Nearly 60% of the nursing home’s residents now have coronavirus. Thirty-seven have died.

With 58% of all COVID-19-related deaths in Connecticut taking place in nursing homes, industry leaders have been quick to cite the virulence and stealth of the fast-moving virus.

“We now know that this insidious virus can be carried and spread by people who show no symptoms – and once it enters a building, it becomes very difficult to contain,” said Patricia Morse, vice president of the non-profit nursing home association LeadingAge Connecticut.

But inspection reports and evaluations for the nursing homes hit hardest by coronavirus show those facilities were far more likely to have problems with staffing levels, to have been cited by federal government inspectors for serious infection control violations, and to have worse inspection grades than nursing homes where no cases have been recorded, a CT Mirror analysis has found.

Among the facilities where at least 10% of the residents have COVID-19, just over half recorded “below or much below average” ratings compared to one-third of the homes without the virus.

And while it is not universally true, the homes fined or cited for violations are the ones now most likely to be hardest hit by COVID-19.

When it comes to the overall score nursing homes receive, 34% of all the facilities have below average ratings, compared to 40% of the homes where one-in-10 residents have COVID-19, and 26% in homes where no residents have the virus. Regular federal inspections of nursing homes lead to an overall rating from the Centers for Medicare and Medicaid Services. Those scores are based on the three most recent inspections, which are either annual or can be more frequent following a complaint.

Abbott is not the only nursing home with a high COVID-19 infection rate that has been cited for serious deficiencies.

At Riverside Health and Rehabilitation — which now has more residents infected with the coronavirus than any other nursing home in the state — inspectors last summer found a resident with an open wound that needed to be bandaged and an explanation that staff was too busy passing medications to the residents to address it. At Parkway Pavillon in Enfield — which has the highest percentage of its residents infected — inspectors last summer were told that a resident was not being offered showers because the facility did not have a shower chair to accommodate the person’s weight.

Neither Riverside Health and Rehabilitation nor Parkway Pavilion responded to a request for comment last week.

A new round of site visit inspections — which are separate from the CMS inspections — ordered by Gov. Ned Lamont after the pandemic began have also been completed.

So far, findings from those visits have not been made public.

Left in the dark

Whether things have improved since these inspections took place – and whether nursing homes are equipped to handle the pandemic – remains unclear.

Nursing home staff and their union leaders have accused the state of not providing enough protective gear to keep them safe. Industry leaders have complained about inadequate funding to manage an unprecedented staffing crisis and skyrocketing equipment costs.

“The epicenter truly is in our nursing homes,” SEIU Healthcare 1199 President Rob Baril has said, adding the situation is “absolutely cratering. It’s collapsing.”

During a press call with reporters Thursday, Morse said the newest round of inspections ordered by Lamont have been helpful in improving care and protecting residents and staff – and she hopes the results don’t lead to public shaming.

Inspectors from the state Department of Public Health, medical personnel with the Connecticut National Guard and officials from the Centers for Disease Control and Prevention plan to continue unannounced visits at nursing homes and assisted living centers statewide. They are checking on infection controls and the level of personal protective gear, conducting surveys with workers, and monitoring staffing levels.

“While we welcome this enhanced monitoring process, it’s my hope that it’s more than an inspection, followed by a written report card outlining deficient areas for improvement,” Morse said. “We’re not looking for facilities to be identified, we would just like to learn from the results.

“If each survey is a silo event, then we don’t have the opportunity to learn from each other’s mistakes or take advantage of each other’s successes.”

The governor has already begun touting the results of the inspections, saying late last week that only one home was running short on protective equipment such as gloves or gowns, and that staffing problems are isolated. 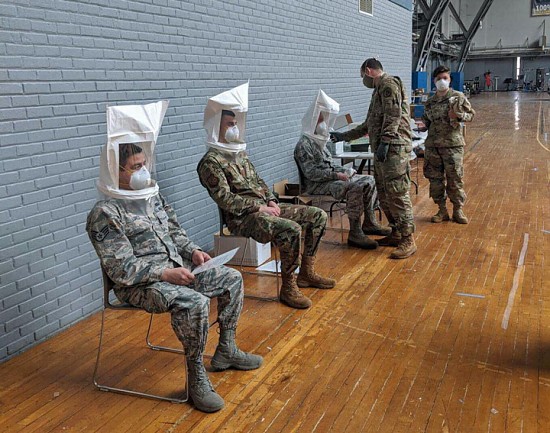 Requests made over the last 10 days to the governor’s office and his Department of Public Health to review the first batch of inspectors’ findings went unanswered. A spokesman for Lamont said he did not know if the inspectors are preparing reports or summaries of their conclusions.

Asked whether Lamont was reviewing documents related to those inspections,  Spokesman Max Reiss, said: “The governor makes orders all the time. Is he supposed to sit behind his desk and go through 50 reports? No. There’s no governor doing that.”

Av Harris, a spokesman for the state’s public health department, said he also did not know whether reports or summaries were being prepared for each nursing home visit.

“We’re going in, we’re observing. I’m not sure there are reports composed after every visit,” he said. “They may not have the time to do that. I don’t know how those are being recorded. I don’t know if there’s a specific report.”

The Lamont administration said Monday that the health department has issued findings based on inspections completed over the last two weeks. Nursing home managers have 10 days to respond to the conclusions, and then the reports will be made public, the administration said.

Though the inspections began two weeks ago, state health officials have yet to release any of the records.

What to make of the infection rates

In New Haven, Grimes Center has been hit particularly hard, with 58 residents testing positive for COVID-19.

Dr. James Lai, a geriatrician and the associate chief of clinical affairs for geriatrics at Yale School of Medicine who is heavily involved in resident care at Grimes, said there are myriad reasons the coronavirus is more pervasive in some nursing homes.

Grimes takes in more short-term residents than other facilities. Many of those residents are discharged from hospitals and are finishing chemotherapy or recovering from a hip replacement. They typically require more check-ins with medical providers, which means more exposure to the virus.

“We have some patients who are pretty sick,” he said. It’s also a challenge to isolate everyone suspected of having COVID-19. 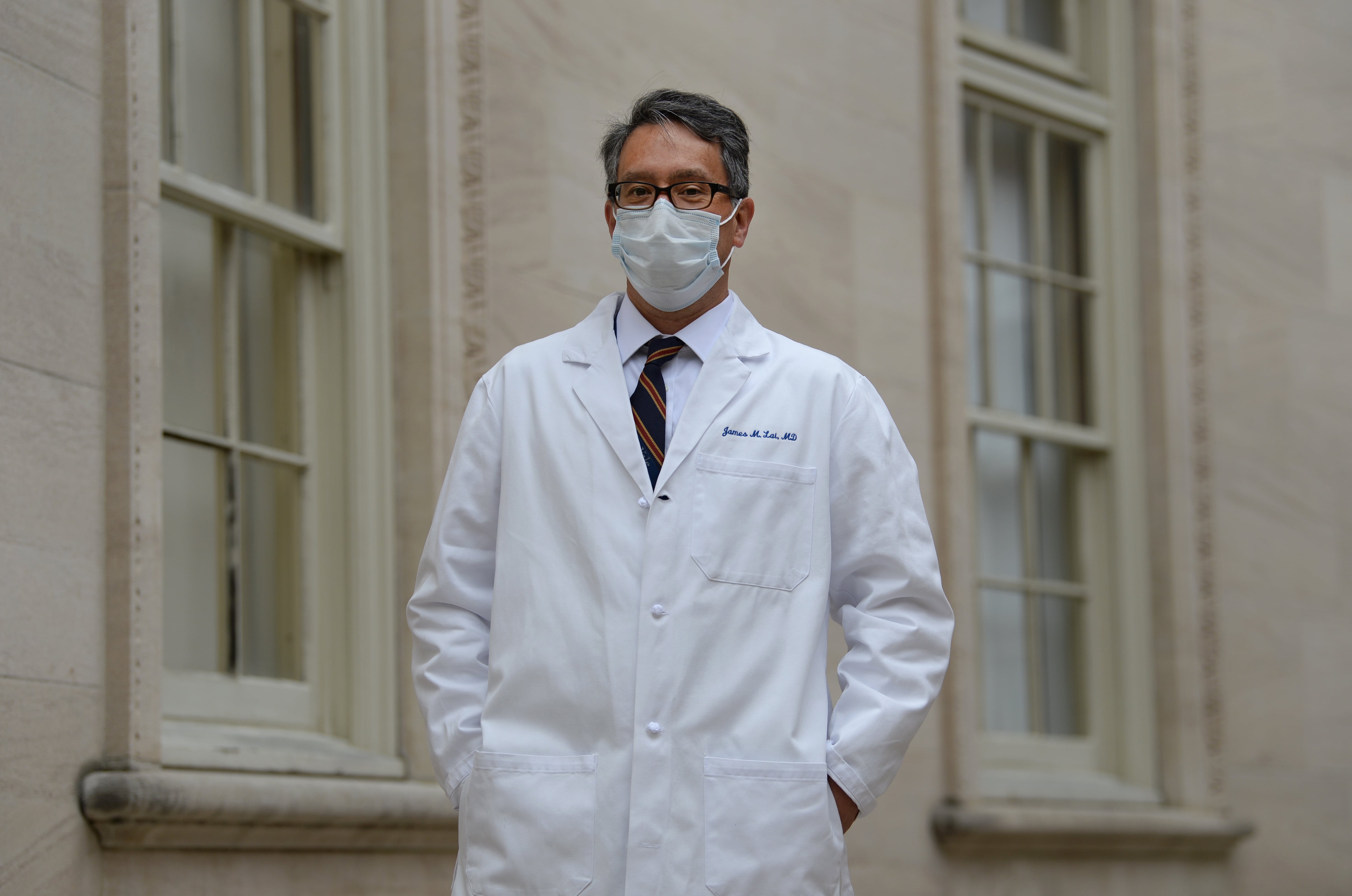 Tim Brown, a spokesman for Athena Health Care Systems, which owns Abbott Terrace in Waterbury, has expressed skepticism over the state’s figures. He said Abbott’s tally of infections and deaths is inflated because the facility has welcomed COVID-19-positive residents from nearby assisted living centers and other nursing homes. Some hospice residents also contracted the disease and were being counted among the deaths.

“We are not confident that the numbers in the report are an accurate depiction of our center,” he said.

Brown did not respond to questions about how many additional residents Abbott Terrace has accepted from other facilities. In a statement, he said that 24 of the residents who had COVID-19 are now symptom free.

“While most patients in nursing homes have significant health challenges to begin with, some nursing homes, such as Abbott Terrace, are equipped and trained to provide additional levels of care to more medically complex patients and residents,” Brown said. “With multiple comorbidities and risk factors, these patients, therefore, are considered to be at the highest risk level. Under COVID-19 pandemic circumstances, the effects are devastating to these patients who sadly succumbed to COVID-19 related complications.”

“We remain confident in our infection prevention practices,” he said. “From the beginning of this crisis, we have implemented extensive infection control measures to protect residents. Recent independent state inspections have consistently found our center to be fully in compliance on issues of infection prevention and PPE.”

Requests to state officials for the inspection findings went unanswered.

Lai said the ratings and the data collection are helping to ensure problems are identified and improvement follows. State inspectors have already visited Grimes Center twice.

“We have to really stay on top of it,” he said. “There is definitely a lot of oversight.”

Mairead Painter, Connecticut’s Long-Term Care Ombudsman, said she doesn’t know if there is a correlation between poor inspection ratings and the spread of COVID-19 in certain homes.

“We have to look into it further,” she said.  “It would make sense to me that if you have a higher level of staffing, your instances of infection would be lower because you would be able to designate different areas for care.” Limited staffing, however, has been an ongoing issue affecting care in some nursing homes. “There are some real staffing challenges here in the state,” Painter said.

This story has been updated with a comment from the Lamont administration Monday. 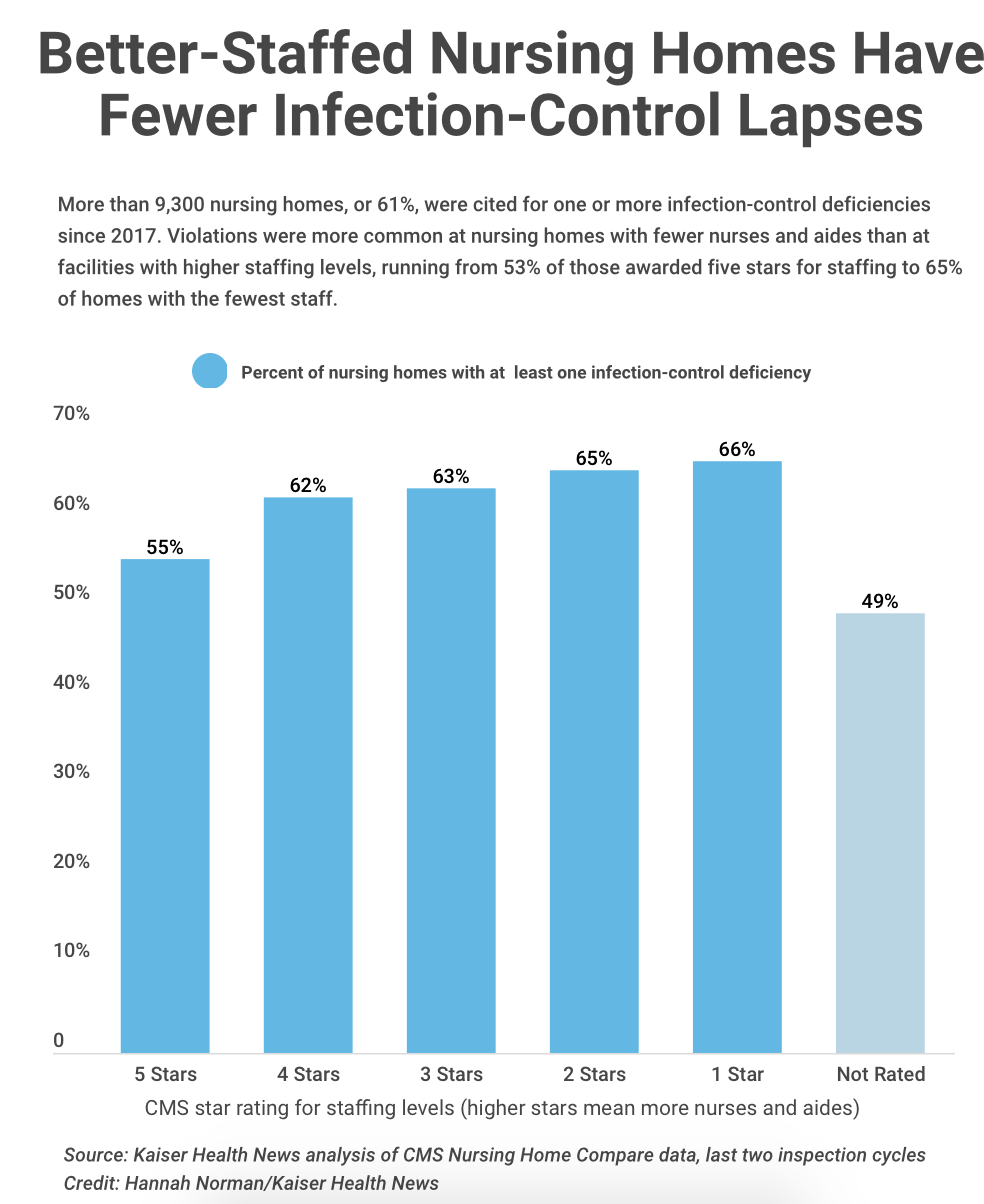