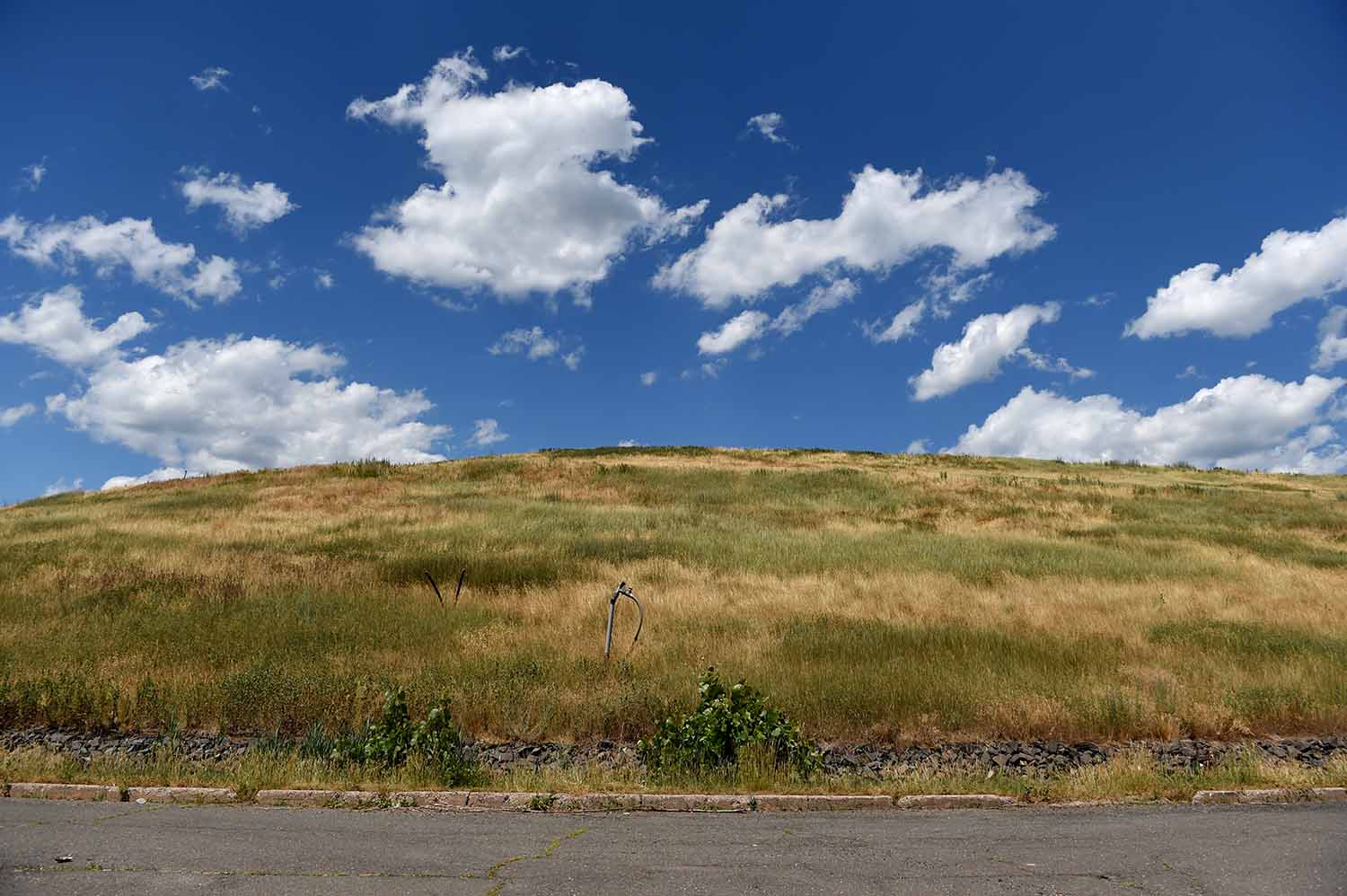 The Hartford landfill, closed in 2015, covers about 100 acres in the city’s North End. The site is leaching PFAS chemicals into sewers, groundwater and the nearby Connecticut River according to testing performed by the state. Further action has been delayed due to the COVID-19 pandemic.

Gov. Ned Lamont and the General Assembly responded in early March by approving more than $2 million to begin testing for PFAS in drinking water wells and public water supply systems and to buy back from local and state firefighting agencies foam containing these hazardous chemicals.

But then COVID-19 hit Connecticut and brought an abrupt months-long halt to the state’s planned PFAS campaign. “The $2 million for PFAS activities has not yet come through,” said Raymond Frigon, assistant director of the state environmental remediation division.

None of the money allocated for those programs can be used unless the funds are approved by the state Bond Commission, whose meetings Lamont cancelled for May and June because of the coronavirus crisis. There has been no word about when the commission’s next meeting might take place.

Anne Hulick, Connecticut director for Clean Water Action, said her organization is “extremely concerned” about the delays in the state’s PFAS programs.

“We’re sensitive to the fact that priorities had to change because of the COVID crisis,” Hulick said Thursday. “But we can’t stall. We have to move forward on PFAS because that is also a health issue and an environmental issue.”

The reasons for the fears about PFAS pollution

PFAS is a short-hand term that stands for perfluoroalkyl and polyfluoroalkyl compounds. These man-made chemicals were invented in the 1940s and research has linked these substances to an array of dangerous health conditions that include immune system problems, several types of cancer, reproductive and childhood development issues, diabetes, high cholesterol and obesity. 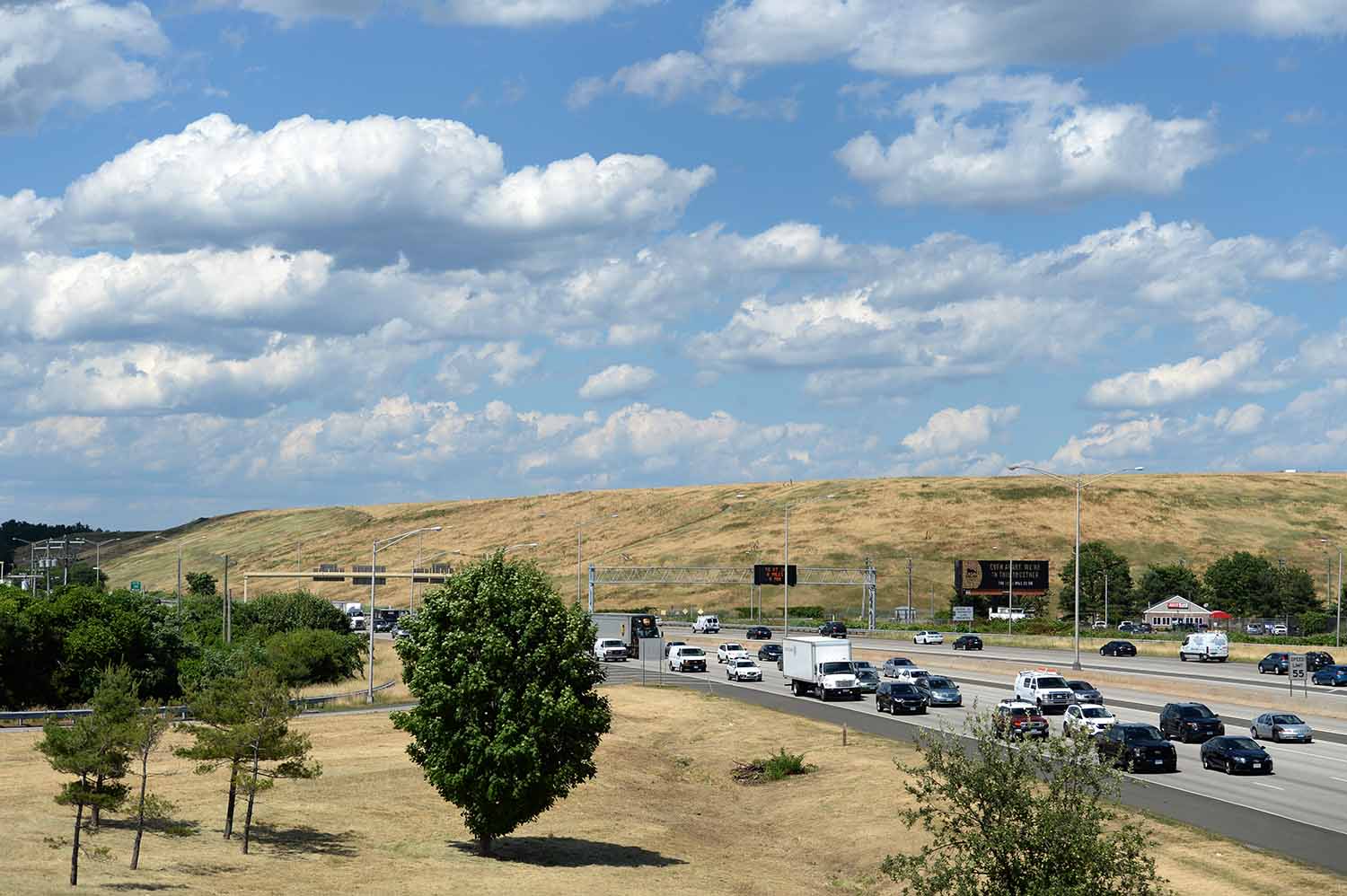 The 100-acre Hartford landfill looms over I-91 in the North End. Closed in 2015 and nicknamed Mount Trashmore, the site is leaching PFAS chemicals.

There are thousands of PFAS compounds and they have been used in everything from industrial processes and firefighting foam to non-stick cookware, stain-resistant carpeting, grease-proof pizza boxes, furniture and rainwear. Scientists warn these chemicals can be hazardous in extremely small concentrations – measured in parts-per-trillion – in drinking water. They have been nicknamed “forever chemicals” because of the length of time they can stay in the human body and in the environment.

DuPont and 3M have already paid out hundreds of millions of dollars in settlements as a result of PFAS industrial pollution lawsuits in different parts of the U.S.

A sense of urgency

Chris McClure, a spokesman for the Bond Commission, said in an email that the “Department of Energy and Environmental Protection has advised us this month that they are ready to move forward with the [PFAS] program and it is under consideration.”

McClure said the $2 million plan to test drinking water sources and buyback large amounts of firefighting foam “is an important step in moving the state forward” to deal with this pollution issue.

But neither McClure nor spokesmen for Gov. Lamont were able to say if the bond commission meeting that would normally take place in July would actually happen.

Rep. Jason Rojas, D-East Hartford, is co-chair of the legislature’s Finance, Revenue and Bonding Committee and a member of the bond commission. Rojas said he hasn’t been informed when the commission would next meet but that there is “an understanding that the bond commission will be meeting this summer.”

“Obviously there is a legitimate sense of urgency around it,” Rojas said of the PFAS pollution controversy. “It’s a concern to those people directly impacted [by PFAS contamination] and to those concerned about its impact on the environment and human health.”

Connecticut’s experience with this chemical pollutant 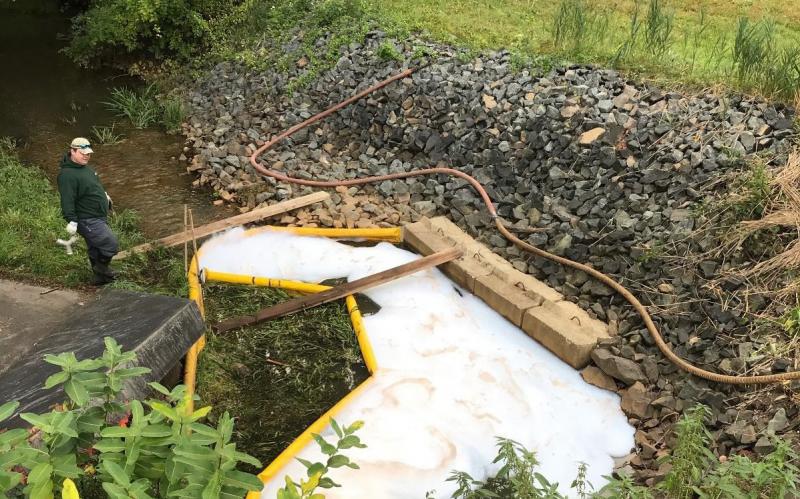 An area set up to contain PFAS-filled foam in Windsor following the crash of a B-17 at Bradley Airport.

Additional state testing of fish samples in the Willimantic, Natchaug and Shetucket Rivers in eastern Connecticut triggered a public health warning in May about eating fish from those water bodies. A similar consumption warning about eating too many fish caught in the lower Farmington River has been in effect since last year.

Frigon said coronavirus-related concerns have also delayed additional testing of fish samples from the Farmington River that were expected to have been completed by now.

State tests around old landfills in Hartford and Ellington have confirmed that PFAS chemicals are leaking into sewers and groundwater. In the case of the Hartford landfill off Interstate 91, PFAS contaminated water is apparently reaching the nearby Connecticut River.

“We believe PFAS is fairly ubiquitous in landfills,” said Betsey Wingfield, deputy commissioner for environmental quality at the Connecticut Department of Energy and Environmental Protection. She said most old landfills weren’t lined and capped to prevent hazardous chemicals from leaking out.

“It’s fair to assume that any landfill that has received household trash any time after the 1940s is fair game for the presence of PFAS in landfill leachate,” Frigon said.

Gov. Lamont proposed changes in the state budget in February that would, in addition to the $2 million in bond funding, provide another $1.35 million be spent on PFAS-related programs. Those would include upgrading the state laboratory to enable it to analyze drinking water for PFAS, provide staffing and resources to check surface waters and sediments for these chemical pollutants, and fund a new Safe Drinking Water Advisory Council.

But the General Assembly failed to act on those proposed budget revisions before it adjourned in March because of the pandemic.

The pandemic-related hold-up of that $2 million in state bond money hasn’t stopped all of this state’s efforts concerning PFAS.

Using limited money from within its regular budget, DEEP officials are planning to hire a consultant to create a geographical data base to identify high-priority areas of the state where PFAS could be leaking into drinking water sources from old landfills, firefighting training stations, industrial sites and airports, Frigon said.

State officials have already “identified some high-priority areas” for PFAS testing in different parts of Connecticut that Frigon said could begin later this year. He declined to name those specific areas because local officials haven’t yet been notified about the possibility of PFAS pollution in their communities.

PFAS testing wasn’t the only DEEP environmental monitoring program that was impacted by the coronavirus crisis.

“During the height of the pandemic, we curtailed some field activities,” Wingfield said. Those generally included on-site inspections of industrial and other facilities where DEEP personnel would be required to be inside buildings and in possible close contact with employees of those facilities or businesses, Wingfield said.

Wingfield said most of those field inspections have now resumed, but that her agency is “not quite back to full implementation.”

A sharp divide between Gov. Ned Lamont and progressive Democrats over tax reform and income inequality is also blocking TCI.

ISO-New England has requested permission to cut Killingly from its plans, elating environmental activists who oppose the power plant.

There’s no cheap way to deal with the climate crisis

The scale of the threat demands a new way of thinking about spending.

The impacts of climate change on Connecticut residents’ health run a long range of direct and indirect outcomes.

With trash plant at death’s door, is it time for state leadership?

The uncertain fate of MIRA, the region's trash-to-energy facility, has some wondering whether it should be run as a utility.