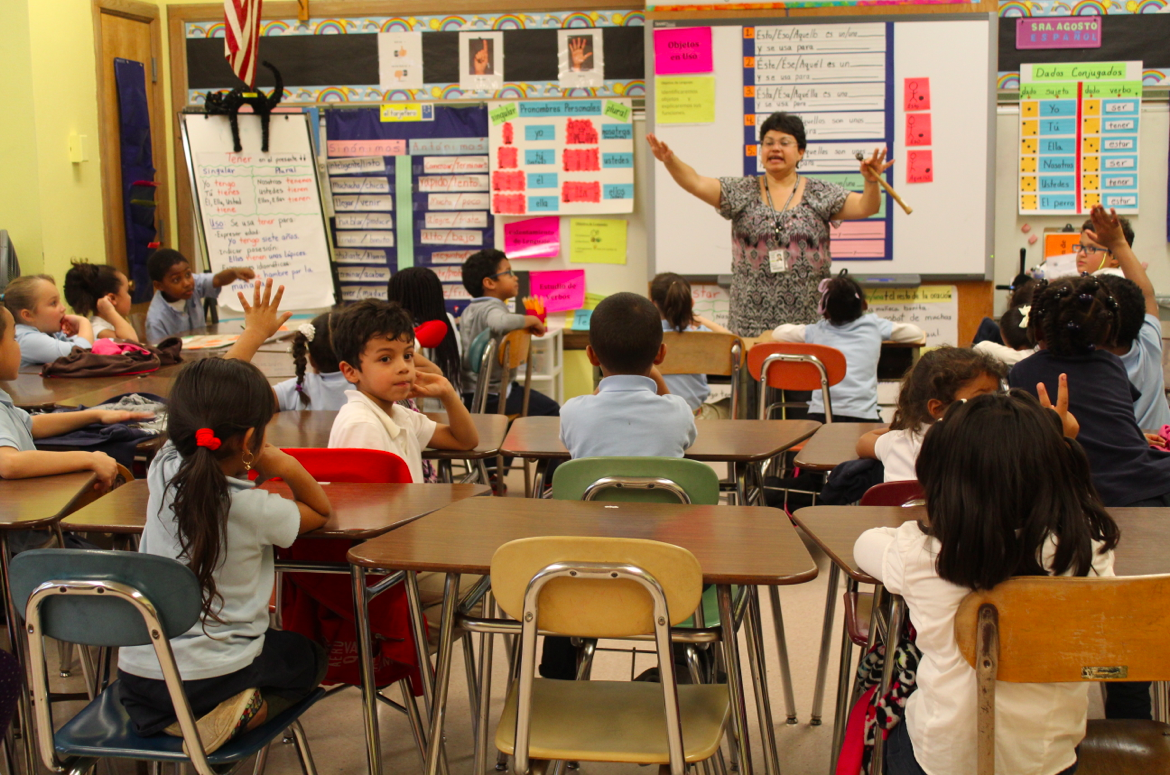 In-person learning will look very different this fall when students return to the classroom, with rules about mask wearing and social distancing in place. Above, a teacher instructing students at Diloretto Elementary and Middle School in New Britain.

While some states are reassessing plans to allow even limited in-person learning for elementary and secondary school students, Gov. Ned Lamont is moving forward with a recommendation that Connecticut schools return to their classrooms five days a week this fall.

School districts in other parts of the nation had been planning a mix of classroom and virtual learning for the 2020-2021 school year. But with coronavirus infections rising in other parts of the country, governors — even those in red states that had ambitious reopening plans — are reconsidering. Texas delayed releasing its final school recommendations as cases exploded in the state and South Carolina, another state where cases are rising, says it will be “difficult” to have face-to-face classes in the fall.

“If this continues across the country, kids are going to be home for a long time, “New York Gov. Andrew  Cuomo said on “Meet the Press” on Sunday.

Connecticut has one of the lowest infection and hospitalization rates in the nation and its back-to-school plan is contingent on those rates staying low. While calling for “regional consistency” in school district plans, the guidance released by the Connecticut Department of Education on Monday also says districts should have contingency plans for “blended” learning — a mix of in-school and online classes — and all-remote learning.

“My number one principle metric was the public health lens, just like we said about reopening our businesses nothing makes any sense unless people feel like they’re safe, and they are safe,” Lamont said last week as he announced the school reopening plan. “And that was priority number one, two, and three as we give you confidence that we can reopen the school safely, provided COVID behaves.”

But Connecticut’s main recommendation is among the most ambitious of all states that have issued guidance, calling for a full day, in-school experience with social distancing between student workspaces “when feasible.” The proposal recommends class sizes be smaller to accommodate social distancing, but does not mandate an increase of teachers or classrooms. Instead, students would be moved to gymnasiums or auditoriums to shrink the size of classes.

Masks will be required for students and staff, but unlike other states that are allowing children to return to school, such as New Jersey, Connecticut’s plan does not require temperature checks or COVID -19 testing.

Massachusetts Gov. Charlie Baker has also pressed for schools to open their doors to students this fall and issued guidelines that mandate school districts plan for a blended or “hybrid” model as well as all-virtual learning should COVID-19 cases spike in his state.

Cuomo said it’s too early to determine what New York schools will do, even as infection rates in his state have reached new lows.

“It’s two months away,” the N.Y. governor said of the start of the new school year. “Anything can happen in two months.”

Meanwhile, in states where the virus is surging, like South Carolina, education officials are now backing away from their plan to reopen schools in the fall.

“If it continues on the same path we’re on right now, it’s going to be extremely difficult for us to be able to go back face-to-face,” South Carolina Superintendent of Education Molly Spearman said at a press conference last week.

Other states are looking at hybrid systems in which students attend school a few days a week, or maybe even just one, limit the number of  children in a classroom to maintain social distancing and mandate the wearing of masks, although that may be difficult for younger students.

Some states are considering “multitrack” learning, allowing groups of students in school buildings on different days and “staggered” classes, with half of the students attending in the morning and half in the afternoon. 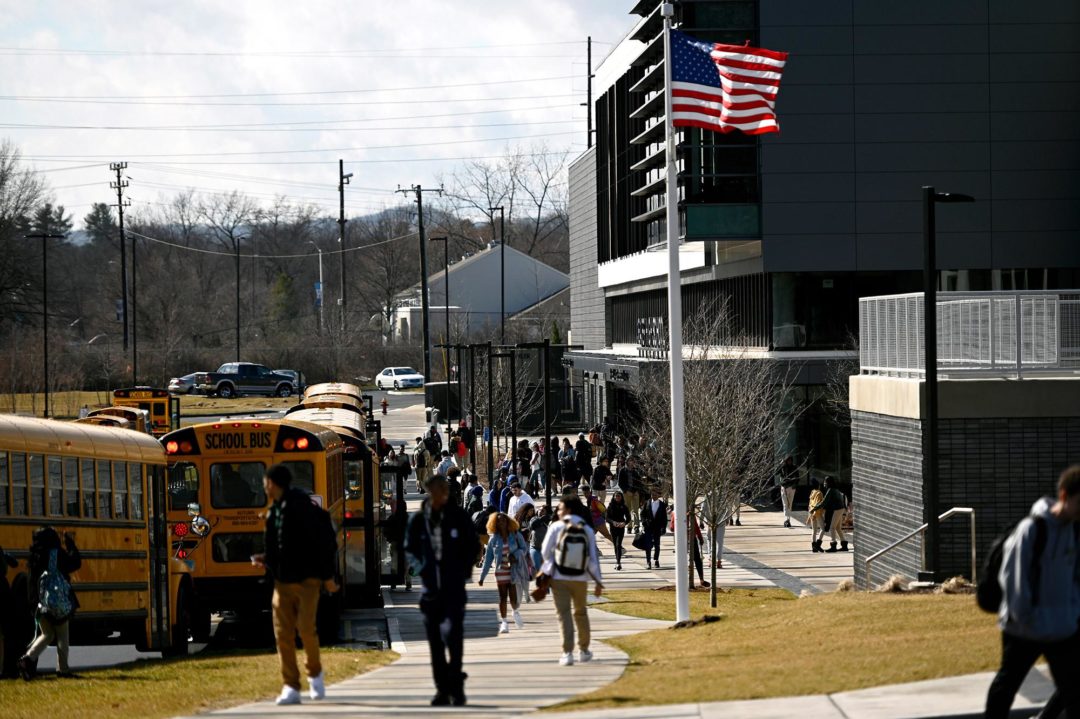 Weaver High School students board buses on March 13, the last day of in-person classes before Hartford Public Schools announced they are closing indefinitely to mitigate the spread of the coronavirus.

In  some cases, parents are helping make the decisions.

Fairfax County, Va., which has about 190,000 students, has asked parents to weigh in on two options — either fully virtual school or part-time face-to-face education.

Pennsylvania Gov. Tom Wolf has colored his counties red – for the areas with highest infection rates – yellow and green. His school reopening plan would allow students and teachers in green and yellow counties to return to school, provided the district creates a plan that follows Center for Disease Control and Prevention guidelines. Students in red counties would take all classes online.

Meanwhile, Illinois Gov. J.B. Pritzker’s back-to-school policy is much like Lamont’s, allowing students back in the classroom, with everyone in masks, but leaving open the option for local districts and private schools to create their own plans.

Many school districts, including some of the nation’s largest like New York City and San Francisco, have not yet announced final plans for the 2020-2021 school year.

Teachers, almost universally, are pressing school districts for a “go-slow” approach  — and asking for funding to implement safety protocols.

A USA TODAY/Ipsos poll last month found one in five teachers say they are unlikely to go back to school if their classrooms reopen in the fall.

And nearly two-thirds of teachers who responded to a Connecticut Education Association survey earlier this month said their schools are “not equipped to provide for frequent and sufficient hand washing for students and staff to reduce the spread of the virus.”

“At first glance it appears incomplete at best,” the unions said. “We have yet to find any reference to empowering local or regional districts with the resources clearly needed to implement the sort of in-person learning plan outlined.”

The unions said the plan “appears to pass the proverbial ‘buck’ for reopening buildings to local school superintendents and board members who already face difficult budgetary choices.”

They also said some districts have the resources to carry out the plan, while those in “high-need” communities do not. The teachers’ unions also said parents in those low-income school districts lack access to paid leave and this would force them to make “an impossible” choice about sending sick children to school during a global pandemic that is expected gain strength in the fall.

“Clearly what Connecticut’s students, their families and educators need is a lifeline, not an anchor — unfortunately that is all this so-called ‘plan’ appears to be,” the unions said.

Lamont said last week he understands why teachers and parents are concerned about schools reopening.

“There’s obviously a lot of natural anxiety in the middle of this COVID pandemic,” Lamont said “We try here to give people a sense of confidence so we can do this and do this safely. I can tell you, talking to a lot of teachers, yep, there’s anxiety, but they also really miss those kids, they know the importance of the classroom experience.”

The bill, ignored by the GOP-controlled Senate, contains $200 billion to fill state and local education budget gaps, including funds for personal protective equipment like masks. and money for computers for low-income students.