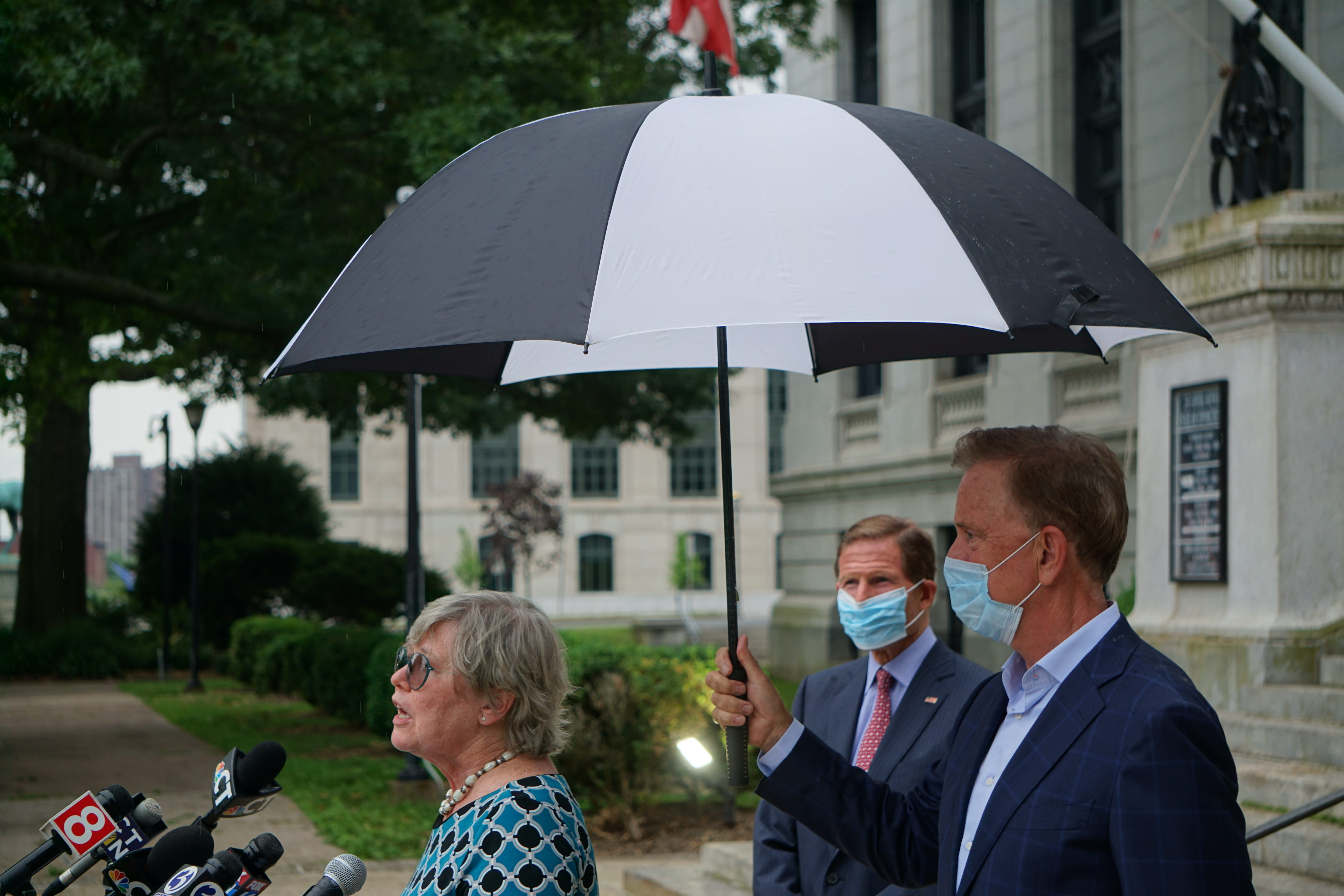 The threat of rain did not dissuade Democrats from hastily gathering Wednesday on courthouse steps in Hartford to denounce a U.S. Supreme Court decision potentially limiting women’s access to birth control under the Affordable Care Act.

The 7-2 decision was treated as both an unwelcome legal finding and a political gift, underscoring Democrats’ belief that President Donald J. Trump’ animus toward Obamacare, especially as it applies to preventive care for women, energizes their base in blue states like Connecticut.

“This issue is dynamite,” U.S. Sen. Richard Blumenthal, a Democrat, said after the news conference.

The court ruled that employers can opt out of requirements to provide contraceptive coverage on the basis of moral or religious objections. By regulation, the Trump administration had broadened a religious exemption established under President Barack Obama.

The opinion, written by Justice Clarence Thomas, is not a final victory for the Trump administration. It reverses a lower-court decision that blocked enforcement of the broader regulation largely on procedural grounds.

Without mentioning presumptive Democratic nominee Joe Biden by name, Blumenthal was quick at the press conference to place the decision in the context of the presidential election.

“The president of the United States, a new president, could pull this rule, rescind it, withdraw it. That’s what a new president should do. This one won’t,” Blumenthal said. “But elections matter. They have consequences.”

Gov. Ned Lamont, an early endorser of Biden, said, “You can change the law with a new president.”

But national polling by YouGov in May shows the issue is double-edged. By nearly a 2-1 margin, Democrats said employers should be forced to cover contraception. But only 42% of unaffiliated voters and 31% of Republicans held the same view.

J.R. Romano, the Republican state chairman, said the Democrats’ quick embrace of the court decision as a wedge issue reflected Biden’s shortcomings as a candidate who can turn out the vote.

“Outside of the people who are vehemently anti-Trump, they are going to have a hard time inspiring anyone, because Joe Biden is such a terrible candidate,” Romano said. “They are going to be doing what they can to keep the base energized and engaged.”

Trump has played the largest role in energizing the Democratic base, helping Democrats gain state legislative seats in 2018 for the first time in a decade. But there also was an open race for governor and a U.S. Senate race to help with turnout in 2018. There are no races for statewide office in Connecticut in 2020.

The Trump administration defended its regulation as protecting religious freedom, not undermining access to affordable contraception.

“Ensuring that women receive the health care they need does not require banishing religious groups that refuse to surrender their beliefs from the public square,” the White House said in a statement.

By the administration’s count, between 70,000 and 126,000 women could lose access to free birth control. No estimate was available for Connecticut.

The decision offers companies, colleges and charities the means to claim an exemption from an Obamacare provision that requires employers of more than 50 workers to pay the cost of contraceptives as a form of preventive healthcare. 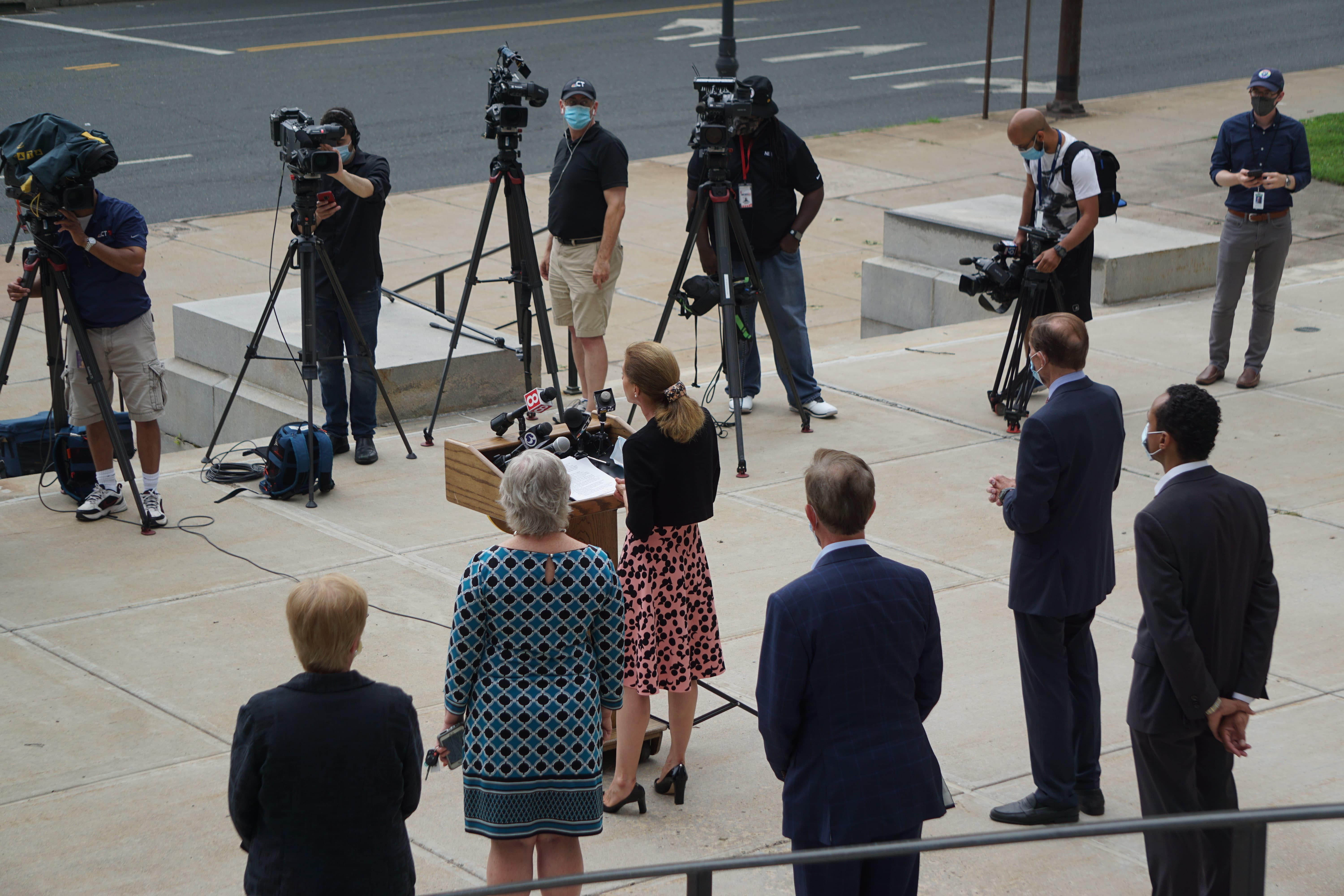 A lower court had struck down the Trump administration’s regulation largely on procedural grounds, concluding that the Department of Health and Human Services lacked the authority to make exemptions to the preventive care requirements.

“We’ve enshrined a key health provision of the Affordable Care Act into our state law,” Bysiewicz said, calling the state protection vital in the face of hostility by the Trump administration.

But its reach is limited. State laws don’t apply, for example, to coverage offered to employees by companies that self-insure.

Blumenthal, Lamont, and Bysiewicz were joined by Treasurer Shawn Wooden, Hartford Mayor Luke Bronin, two state legislators and leaders of NARAL and Planned Parenthood on the steps of the Connecticut Supreme Court.

When rain began to fall, the press conference continued with Lamont holding an umbrella over subsequent speakers.