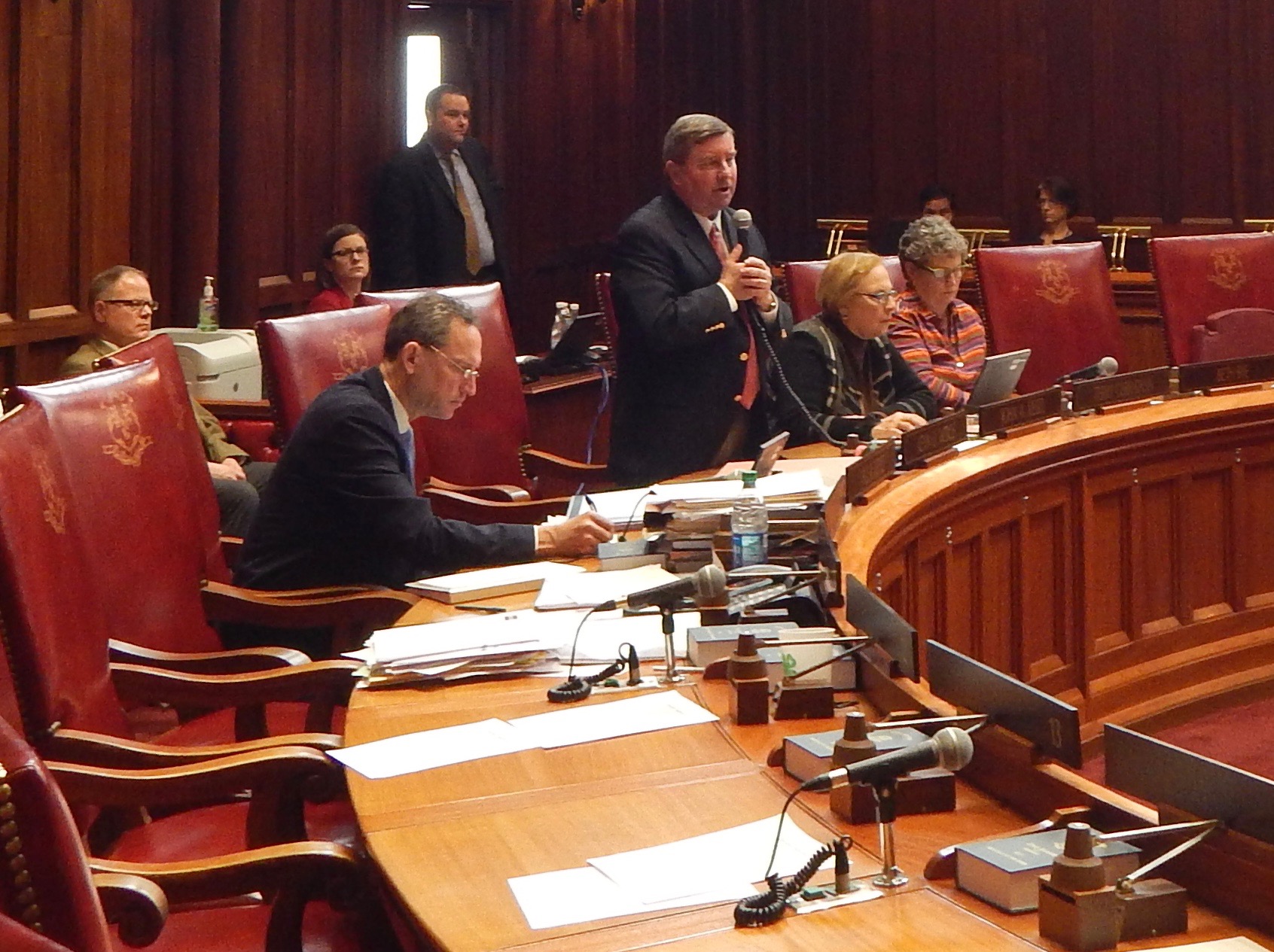 Sen. John Kissel, Ranking Republican of the Judiciary Committee, back when committees met in real life.

Members of the Judiciary Committee formally unveiled a draft of their police accountability bill on Friday morning, a measure they’ll soon take up in a special session – and that Republicans stressed is a work in progress.

“I have not personally endorsed this proposal,” said Sen. John Kissel, R-Enfield, one of the committee’s ranking Republicans. He said he needed to hear from his constituents and members of law enforcement, and that Senate Republicans will want to look closely at the draft.

“So, I can’t predict if there will be votes from my caucus for this bill — one, or none, or several — at this point in time… I’m not sure that everything in the bill will remain exactly as is.”

The other ranking Republican on the committee, Rep. Rosa Rebimbas, R-Naugatuck, said lawmakers just received the bill last night, at the same time as the public.

“So at this time, there is no specific, ‘Republicans like this, Democrats like that,'” she said. She declined to give many specifics on what she dislikes in the bill before discussing it with colleagues, besides cautioning against unintended consequences and unfunded mandates.

The bill proposes an array of reforms, from narrowing when a police officer is allowed to use deadly force, to tightening restrictions on officers’ use of chokeholds. It would also create an inspector general role to investigate and prosecute officers’ misuse of deadly force. The bill mandates that all cops undergo periodic mental health screenings and requires state troopers to be certified from the same training council as municipal police.

And it makes disciplinary records subject to Freedom of Information Laws, no longer allowing officers’ wrongdoing to be hidden from public view.

It also charges the Police Accountability and Transparency Task Force with broadening its scope to, among other things, examine: “no knock warrants,” the police action that led to the death of Breonna Taylor; the benefits and feasibility of requiring police to carry professional liability insurance, a provision experts think might make cops less likely to use deadly force; and the necessity of requiring the presence of a cop at a road construction site.

The task force is required to produce a report before the next regular legislative session in January, which Rep. Steve Stafstrom, D-Bridgeport and co-chair of the Judiciary Committee, said indicates “this is not necessarily the be all, end all bill on this issue.”

There will be a public hearing on the bill before lawmakers head to the Capitol for a special session later this month.

Kissel said he was concerned about removing some police protections.

“There is a concern that’s been expressed to me that if you take away the protections against what essentially are frivolous or unfounded accusations, the ultimate burden will then fall upon municipalities,” he said. “So there’s a whole fiscal impact that this bill is going to have that to my understanding thus far have not been fleshed out.”

Kissel thanked Stafstrom and his co-chair, Sen. Gary Winfield, D-New Haven, for working with Republicans on the proposal, despite that Democrats have majorities in both chambers.

“That tells me there is a visceral desire to hopefully come together in some bipartisan fashion,” Kissel said. “But again, I can’t predict where this is going to end.”